“We find that half of the American public consistently endorses at least one conspiracy theory,” says a research paper issued this spring by Eric Oliver and Thomas Wood at the University of Chicago.

The professors crunched the numbers from four national surveys between 2006-2011. Among the findings…

What do you believe that others would label a “conspiracy theory”?

Your editor will get the ball rolling with a disclosure of our own: We’ve slowly come around to the idea that the gold price is being manipulated.

Time was we were in Doug Casey’s camp: He believes gold manipulation doesn’t meet the Occam’s razor test; the various and sundry explanations are too convoluted.

But the explanation proffered by Jim Rickards in his book The Death of Money is compelling. His research and documentation is peerless. “Get the annual report from the Bank for International Settlements,” he told us over dinner here in Baltimore six weeks ago. “Read the footnotes. I understand it’s geeky, but it’s there.

“They actually get audited,” he explained — “unlike the Fed and unlike Fort Knox.”

Or how about this one, straight from this morning’s headlines: What if the U.S. military had a hand in Facebook’s creepy mass psychology experiment?

All in the interest of scholarship, we’re told: Researchers at Cornell University and the University of California at San Francisco sought to gauge whether “exposure to emotions led people to change their own posting behaviors.” 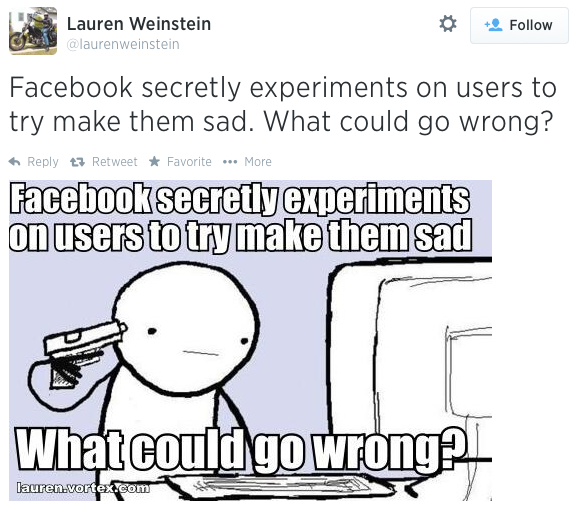 “The experiment is almost certainly legal,” writes Robinson Meyer at The Atlantic, citing Facebook’s terms of service — you know, the legal boilerplate everyone signs but no one reads when signing up for a service online. “Is it ethical, though?”

We’ll leave that for other people to debate. We’re more intrigued by Cornell’s original press release… and a subsequent version that included the following emendation:

Ummm… How do you screw up a basic fact like that in the first place?

“The term ‘conspiracy theory’ was invented by elite media and politicians to denigrate questions or critical presumptions about events about which important facts remain unrevealed,” writes the veteran D.C. journalist Sam Smith.

“The intelligent response to such events is to remain agnostic, skeptical and curious. Theories may be suggested — just as they are every day about less complex and more open matters on news broadcasts and Op-Ed pages — but such theories should not stray too far from available evidence.”

Smith’s Progressive Review has been one of the best Internet news aggregators since its launch 20 years ago. Mr. Smith is a man of the left. But he also sniffed out Bill Clinton as a grifter from the get-go. That stance got him disinvited from polite company in Washington — when he wasn’t being labeled a “conspiracy theorist.”

“The unresolved major event,” Smith writes, “is largely a modern phenomenon that coincides with the collapse of America’s constitutional government and the decline of its culture.”

“Beginning with the Kennedy assassination, the number of inadequately explained major events has been mounting steadily,” Mr. Smith adds, “and with them a steady decline in the trust between the people and their government.”

We bring up all this “conspiracy” stuff this morning as prologue to a recent presentation here at Agora Financial that’s gotten a lot of attention. It has to do with the original “inadequately explained major event” to which Smith refers — who killed JFK.

Nor are we dealing with ancient history: Our findings have everything to do with your portfolio, your standard of living and your retirement plans right now.

So… in the spirit of being “agnostic, skeptical and curious” — to say nothing of being concerned for your financial future — we direct your attention to the research at this link.

Stocks are starting a new week with as little drama as they ended last week.

“With the S&P sitting near the top of its price range, there’s a lot more downside risk in the broad market than there is upside potential,” says Jonas Elmerraji of our trading desk. “So a lack of exciting stock moves last week was pretty predictable.”

Economic numbers may or may not move the needle later this week: The ISM manufacturing survey is out tomorrow, and the Labor Department’s June jobs report is due Thursday.

Crude is little changed, at $105.63, traders unrattled by the beheaders and crucifiers of ISIS declaring they’re a real nation-state now.

That’s a pro forma declaration; earlier this month, we cited reporters on the scene who said ISIS was in the process of forming a new country from the territory it controls in Syria and Iraq. No, they haven’t opened embassies or issued currency yet, but give it time…

“If this drug had been available, this tragedy may not have happened,” writes Ray Blanco on the science-and-wealth beat.

Ray points us to the story of an 18-year-old from Maine who died this year after he had his wisdom teeth out. Last week, the state medical examiner’s office declared his cause of death as an infection called “cervical necrotizing fasciitis.”

As we’ve mentioned from time to time, we’re now in what some scientists call the “post-antibiotic era” — in which we’re steadily overwhelmed by antibiotic-resistant bacteria. It’s enough to get even the sclerotic bureaucrats at the FDA off the dime — more or less. “The U.S. regulatory regime has actually become more aggressive in allowing antibiotics developers a chance to bring more drugs to patients,” says Ray, “and last week’s news bears that out.”

The FDA signed off on a new treatment for acute bacterial skin and skin structure infections, or ABSSSI. “That’s the official name,” says Ray, “for what has been described by a spate of articles the past few years as ‘flesh-eating bacteria.’ It’s as scary as it sounds, and it’s killing people” — to wit, the young man from New England.

Ray figures the drug’s maker — one of his recommendations — will see a 40% increase in sales as a result of this decision alone.

[Ed. note: Ray’s readers have chalked up several successes of late — a 67% gain last week and gains of 30% and 50% the week before. The maker of the new-era antibiotic? “The company is still a buy at today’s price,” he adds. For access to all of Ray’s recommendations, look here.]

Gold is offering as much excitement as crude and stocks today — which is to say none. As we write, the bid is up a couple of bucks, to $1,317.

“I think the worst for Greece has passed,” muses Chris Mayer, now back from his bargain-hunting trip. “We are somewhere bobbing along at the bottom.

“The old country still has some things going for it. Tourism is about a fifth of the economy.” Among the islands Chris and a small group of readers explored — Crete. 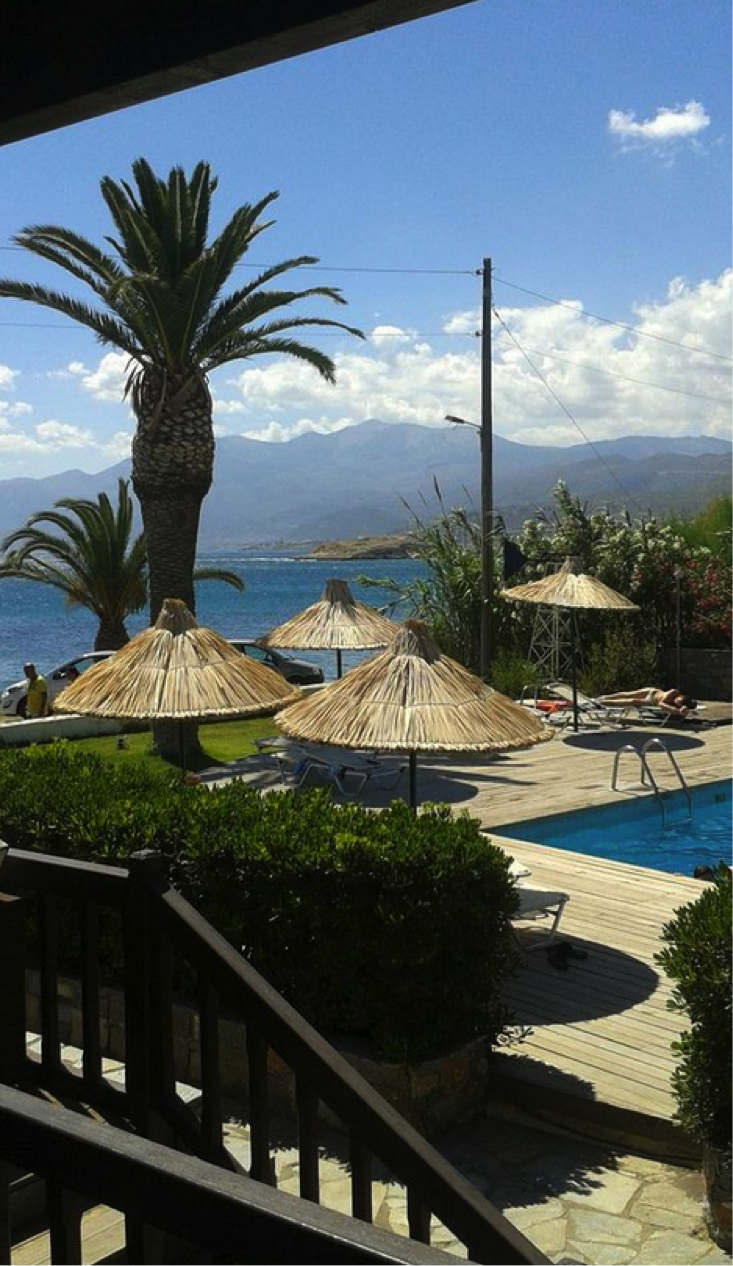 A view from the hotel lobby…

“China’s premier, Li Keqiang, was also on Crete while we were there,” Chris reports. In fact, Li and the Chinese delegation were in the hotel next to ours. There was a beefed-up police presence everywhere and lots of Chinese flags fluttering aside Greek ones.”

“The Chinese tend to play a long game,” Chris reminds us. “They’ve been enthusiastic investors in Greece post-crisis. Greece is desperate for capital and investment. And China has plenty of money. In Crete, Li has China positioned as the lead bidder on building a new international airport. Chinese companies have also shown much interest in buying Greek privatizations.”

Chris promises much more about the opportunity in Greek privatizations when he puts the final touches on the next issue of Capital & Crisis.

And now for an improbable sell signal you can apply to all your stock holdings: Where does the next shareholder meeting take place?

“When companies move their annual meetings a great distance from headquarters, they tend to announce disappointing earnings results and experience pronounced stock market underperformance in the months after the meeting,” according to a recent paper put out by the National Bureau of Economic Research.

“Companies appear to schedule meetings in remote locations when the managers have private, adverse information about future performance and wish to discourage scrutiny by shareholders, activists and the media,” says the paper, prepared by professors from Temple and NYU.

“However, shareholders do not appear to decode this signal, since the disclosure of meeting locations leads to little immediate stock price reaction.”

Example: TRW Automotive Holdings (TRW). Its May 14, 2007, meeting took place in McAllen, Texas — at the southern tip of the continental U.S. The nearest major airport was 300 miles away in Houston, and company headquarters was 1,500 miles away in metro Detroit.

Another example: “One company, General Cable Corp., has a Kentucky headquarters but held its annual meetings in Spain, Costa Rica and Germany at different times during our sample period.”

“In reference to the justification of ISIS by one of your readers,” a reader writes: “ALL religions and ALL political movements are virtually exact equivalents.

“In fact, politics and religion are often indistinguishable one from another, as each draws from the other to justify their positions. Religions and political organizations follow similar beliefs, and if a member of a religion or a political party expresses a serious difference of opinion from the accepted standard, they may be apostatized by their brethren in much the same way.

Which the academics say makes you more likely to buy into conspiracy theories!

Actually, we’re drawing on previous research here, not the study we mentioned above. The earlier studies, summarized by The New York Times — and elite media don’t get more elite than that — found that “believers are more likely to be cynical about the world in general and politics in particular.

So there you go. If you buy into “conspiracy theories,” you’re a loser with no job eating Cheetos on your sofa bed in Mom’s basement. Or something like that…

P.S. You know, looking once more over our JFK expose, I don’t get the sense that its prime audience will be people “with low self-worth… reacting to uncertainty and powerlessness.”

Heck, the thought of an asset class that delivers average annual returns of 1,303% across a 35-year span sounds mighty empowering indeed. Give it a look.