The email came from one of the most levelheaded people I know. So I dutifully clicked on the link. And the links that followed.

What happened was this: A crew from WNYT-TV in Albany, New York, was doing a story about a historic cottage where President Ulysses Grant spent his final years. It sits near a prison the state of New York was days away from closing. A man identifying himself as a corrections officer came up and said, “No filming.”

After a little back-and-forth, he declared, “Look, I’m not going to go around with you on this. You’re going to leave the property.” Eventually, he called state police, asking them to detain the journalists and confiscate the video they’d shot. 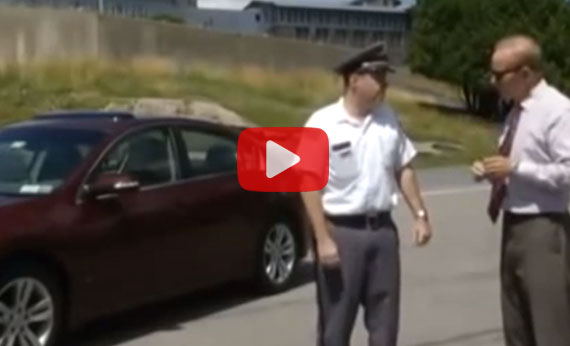 The upshot, according to WNYT’s website: “After roughly an hour and calls between newsroom leadership, state police, and the Department of Corrections, our crew was allowed to leave without surrendering the video.”

To the people at 21st Century Wire, something is funky: “Clearly, this is not just an ’empty prison,’ as WNYT reported.”

To a website called Intellihub, the takeaway was obvious: “Now, some, like myself, suspect that the old McGregor prison facility may be a newly staffed FEMA camp in preparation for the coming Ebola outbreak that has been hyped by the media.”

Look, we’re hip to the Rex 84 program, run by Lt. Col. Oliver North back in the ’80s — a plan to suspend the Constitution in the event of “national emergency.” And we know about the episode of Jesse Ventura’s Conspiracy Theory TV show dealing with “FEMA camps” — by some accounts, the only one of 22 episodes that was never rerun after its first airing.

But truly — take it from someone who worked with TV reporters and photographers for 20 years: The encounter in upstate New York looks like a guy who thinks a badge grants him an extra measure of manhood… throwing his weight around in the post-Sept. 11 era, when any photography of a government building is deemed “suspicious.”

Bonus points: The run-in took place back in July. Weeks before “Ebola” became a household word.

We’re not sure what it is, but there’s something about Ebola that makes people a little — well, unhinged.

But deep in the limbic system — your “lizard brain” — lies a fear response that, for whatever inscrutable reason, is triggered by the thought of a disease that can liquefy your organs and drown you in your own blood.

Which means that even if the worst fears about Ebola never materialize, the mere existence of those fears can dramatically alter money flows.

“It’s just a matter of time before the next case is announced,” says FDA Trader editor Paul Mampilly.

If you read us regularly, you know Paul has been gravely concerned about Ebola. He still is.

“Nothing has changed with Ebola scenario. I still 100% believe that Ebola is going to become a problem in the U.S. and around the world.

“The arc of an epidemic like Ebola is sporadic at first,” he explains. “That’s what scientific models based on past epidemics show you, like this one in Zaire in 1995 that killed 200 people. 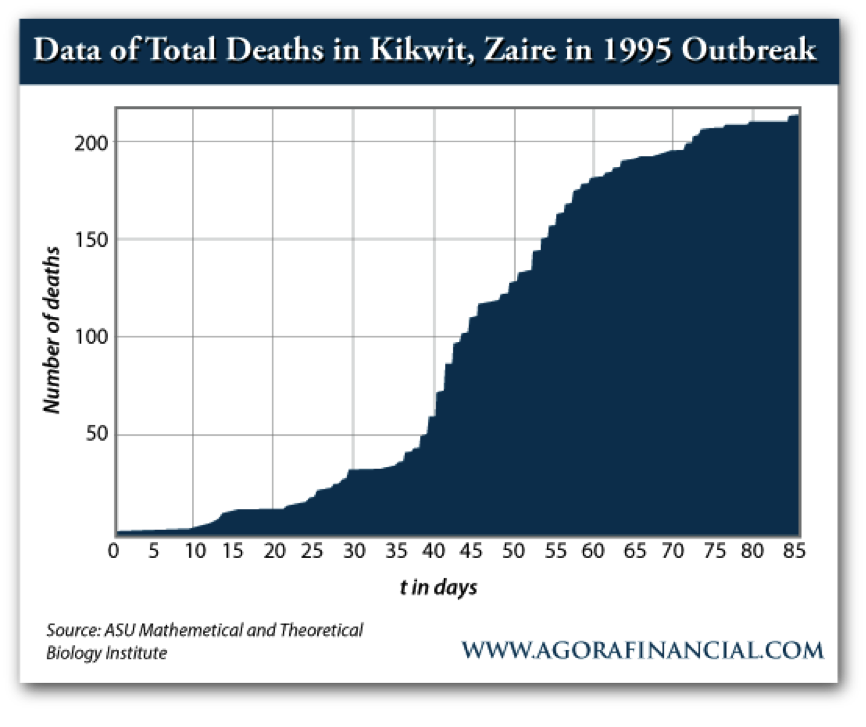 “As you can see in this chart, when Ebola starts, people die slowly first. And then the number spirals upward. Sound familiar?

“Right now, we’re in that beginning period in the United States, when infections and deaths are still low. Disastrous epidemics always follow the pattern of this chart. There’s no escaping it. In other words, the Ebola cycle is repeating itself, except this time in the U.S. and worldwide.

“So it won’t be long before the next case of Ebola shows up in New York, or Los Angeles or San Francisco and Chicago. Or where you live. The moment of Ebola panic is coming.”

“When it arrives, I believe a handful of stocks can go up by 300% or even more,” says Paul.

There’s a surfeit of junk you can find online about “Ebola stocks” — sloppily researched, hastily thought out. It’s no surer evidence of the old saw about you get what you pay for.

Paul, on the other hand, has 25 years of investment smarts, including a gig running a $5 billion hedge fund. And for the last 15 years, biotech stocks have been his special focus. Satisfied readers of FDA Trader write in to tell us that in only two weeks, they make enough money to cover their subscription cost for three years — and have $700 left over.

Paul has just wrapped up an intensive research project into the stocks best positioned to profit from an Ebola panic, real or imagined. It has consumed almost all of his time in recent weeks… and now he’s ready to share the fruits of his research. Follow this link to check it out.

Before the open, the European Central Bank opted to leave interest rates unchanged and laid out plans for some tepid quantitative-easing measures. That sent the euro down to $1.243 and the dollar index up to 87.7.

Gold is holding up, more or less, in the face of that dollar strength. It’s stayed around $1,144 ever since the big sell-off early yesterday.

The near-term outlook from our Jim Rickards, shared on his Twitter feed during a layover on his way to a conference in Dubai…

With silver on sale, U.S. Silver Eagles are temporarily sold out.

The bid is down again this morning, to $15.38 an ounce. Relative to gold, silver is its cheapest in more than five years.

And as the price sank steadily through October, Silver Eagle sales jumped to their second-highest monthly total ever — 5.79 million. Now the U.S. Mint says there are no new ones shipping to its dealer network… and no word when they will again. The Royal Canadian Mint says demand is up “significantly” for its Silver Maple Leafs too.

“Demand for silver has been strong over the past few months,” says Reuters, “but retailers say buying interest has soared in recent days as the metal has slid towards its lowest since 2010.”

But as the saying goes, the cure for low prices is low prices. “When oil and gas are cheap,” says Matt Insley of our energy desk, “it’s not long before buyers come out of the woodwork. Here in the U.S., industrial uses will ramp up, and drivers will embrace cheap gas with more driving.”

And with bigger vehicles, we hasten to add: Of the top 20 vehicle models sold in October, 12 were SUVs or pickup trucks.

“On a global scale we’ll see the same phenomenon,” Matt continues. “Sure, cheaper oil will spur more buyers from emerging markets like China and India. But it will also encourage a rebound in the struggling eurozone, leading to more demand from the region.”

Financial war between the United States and Russia is ramping up — judging by two headlines in the last 24 hours.

The Wall Street Journal reports the feds have launched a money-laundering investigation into Gennady Timchenko — a member of President Putin’s inner circle.

Meanwhile, a bill has been submitted to Russia’s parliament that would ban circulation of the U.S. dollar, or so we see from a story ricocheting around the Web.

That said, the only source for the story is a semiofficial press agency in the former Soviet republic of Azerbaijan. “If the bill is approved,” it says, “Russian citizens will have to close their dollar accounts in Russian banks within a year and exchange their dollars in cash to Russian ruble or other countries’ currencies.”

The ban would not, however, apply to the Russian central bank or Russian government agencies.

If the story’s true, it’s comforting to know Americans aren’t alone contending with a regime that exempts itself from the rules its subjects must live by…

“When I voted Tuesday in my home state of Indiana,” a reader writes, “they not only check your ID, which in my case was a driver’s license, but they also give you a paper ballot with a very easy way of marking the ballot, to prevent voter fraud.

“I commented that I was glad to see this to the woman handing out the ballots and saw that when I said this to her, she quickly had a distasteful grimace on her face, as if upset that there was no opportunity to cheat.”

“Please tell your reader from Colorado to do research on the city of Detroit,” reads an email responding to the reader who complained yesterday how his native state is going downhill.

“The same stuff that your reader was talking about sounds almost like Detroit. (Uh-oh — the Mother of All Financial Bubbles is starting to rear its ugly head!!)

“My new saying is ‘Leave it up to Americans to ruin a good thing.'”

“I wish we never went off daylight saving time,” a reader writes as our DST thread is losing a bit of its momentum.

“DST shifts the light to the evening, where we can enjoy it! I live in Western Canada, where it gets dark around 5 p.m. in the dead of winter. If we had DST all year, darkness wouldn’t arrive until 6 p.m. Then we would get to drive home and enjoy that last precious flickers of glorious sunlight. That’s a big deal for us. Sure, we get more light in the morning, but who needs it then? We’re all just waking up anyway. I can’t wait until it returns in the spring. DST all year!!!”

The 5: Hmmm… Judging by the map below, it could be a lot worse for you.

Some time ago, a software engineer from Google created this map showing the difference between solar noon — when the sun is highest in the sky — and noon on the clock. Green means solar noon comes earlier than it “should,” and red means later. The darker the shade, the more extreme the variance. 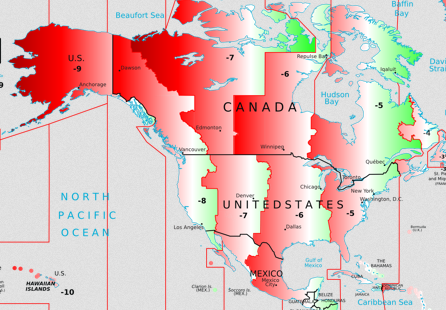 If you’re not in North America, click on the map to see your location…

Oh, and if you’re curious, this map accounts for standard time only. Heh…

P.S. JPMorgan Chase confirmed this week the feds are looking into whether the bank committed crimes in its currency trades.

We have every confidence JPM will face nothing more than a “cost of doing business” fine. Because in the post-2008 era, that’s how the feds roll.

Yes, it’s an outrage. But there’s also a way you, the ordinary American, can make money off the cozy relationship between Wall Street and Washington. Maybe even five times what regular stocks can deliver. Give this opportunity a look right here.

“There’s no legal impediment to even higher debt levels,” says Jim Rickards, “if Congress wishes.” But there’s no good way out… Read More

“SPACs right now are hot,” Ray says, “and everyone wants to get into the action somehow.” Read More

Go figure: At the time of writing, the S&P 500 is only 2% off its all-time high — which was achieved only six weeks ago. Read More

Apple’s pricey new iPhone “primes consumers for the higher cost of even more advanced connectivity that could be making its way,” Ray Blanco says. Read More

A curious mainstream narrative begs the question: Is there a 2020 version of the “Froman email” floating around Wall Street and D.C.? Read More

Regardless of the election, gold’s scarcity coupled with swelling demand — and a pandemic in the background — seem like a recipe for a Midas metal rebound. Read More

Ray Blanco on the question that’s overshadowed Trump’s illness, the mainstream media and the election cycle: “Will we get a vaccine before the election?” Read More