The promise is so big, so staggering, so overwhelming… that I don’t know how to convey it to you, dear reader.

To pull it off, an investment would need to achieve an average gain of 14% a year… for 35 years.

And if your time horizon is more limited, the goal becomes even more ambitious — say, 36% a year… for 15 years.

Still, our Chris Mayer is undaunted…

And Chris is out to find them.

“It sounds like an outrageous quest with a wildly improbable chance of success,” he acknowledges, “like setting out to draw a royal flush in poker. And I would probably have agreed with you not so long ago. But then I started to dig in and study the 100-baggers of history.”

Phelps’ most jaw-dropping finding is that you don’t have to be an expert market timer, buying these stocks at the bottom. “You often have years to buy them,” says Chris. “In example after example, he shows how you could’ve bought the same stock anytime during a five- or 10-year stretch and still had a 100-bagger.

“It would’ve been impossible not to… if you just held on.”

Author William Thorndike didn’t set out to study 100-baggers. But he profiled eight CEOs — four of whom ran companies that became 100-baggers.

Thorndike recently spoke at an event hosted by the New York Society of Security Analysts. Chris asked him if he could identify any CEOs and companies following the Outsiders template on the way to 100-baggerdom.

Thorndike rattled off more than a dozen names. We share three of them now…

Regular and well-timed share buybacks are a common theme running through The Outsiders.

But don’t look for a second edition identifying 100-baggers of the future. Thorndike has no plans for one. “We won’t be able to read Thorndike’s analysis on the next crop of Outsiders,” says Chris. “But we can invest in them.”

That’s because earlier this year, Chris took matters into his own hands — searching for the next 100-baggers.

“What I’m looking for is what these stocks have in common. I want to learn how these spectacular returns came about, with an idea toward using those insights in today’s market.”

Chris has joined forces with an independent researcher for this quest — beginning with a comprehensive study of every 100-bagger since 1962. “This is a massive undertaking. My publisher has already spent $50,000 on the project. The final bill will be higher. I’m convinced it will all be worth it.”

[Ed. note: While the 100-bagger project is underway, we direct your attention to one of Chris’ most valuable investing tools you can put to work right now — an “almanac” that indicates precise days when a small number of stocks are set to soar in price.

Typically, the almanac reveals 30 or so of these shares each year — made possible by an SEC glitch in public filings. “It’s the ultimate cheat sheet,” says Chris… who explains the lucrative strategy in detail at this link.]

“One thing that’s important to remember,” says Jonas Elmerraji of our trading desk, “is that new highs in the S&P 500 don’t necessarily translate into new highs in the individual stocks. For instance, while the S&P is up 12.3% this year as I write, approximately one-third of the stocks that make up the index are actually down in 2014. A disproportionate share of the S&P’s gains is coming from a handful of big, well-performing stocks this year. 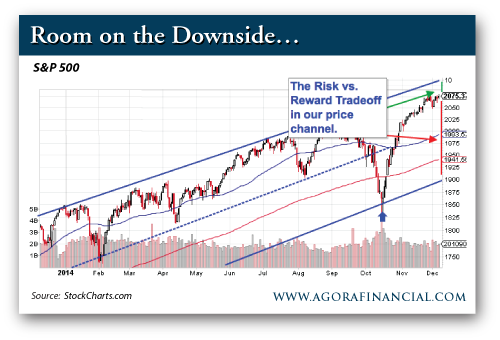 “I don’t want to use the word ‘crash’ here,” Jonas concludes. “I don’t think we’ll get a sharp downward correction in the coming weeks. But I do think we’re in store for some sideways price action in the broad market.”

Don’t look now, but Congress is set to include some goodies for the Christmas stockings of the big banks.


As we mentioned a few days ago, lawmakers are scrambling to avert another “partial government shutdown” this Friday. There’s a budget bill in the works; congressional leaders are using the occasion to lard it down with scads of amendments no one will have time to read.

And one of those amendments would put you on the hook if the banks’ big bets on derivatives go south.

“The bank perks,” Huffington Post explains, “would allow financial institutions to trade certain financial derivatives from subsidiaries that are insured by the Federal Deposit Insurance Corp. — potentially putting taxpayers on the hook for losses caused by the risky contracts.”

This provision is the handiwork of Rep. Jim Himes (D-Connecticut), described by financial blogger Michael Krieger as “a former Goldman Sachs employee who has discovered lobbyist payoffs can be just as lucrative as a career in financial services.”

Bonus points: When Himes tried to tuck this item into a different bill last year, the text was written by a Citigroup lobbyist.

“The big, bad banks that everyone loves to hate are breaking out — big time,” says our resident chart-watcher Greg Guenthner.

Heh… Leave it to “Gunner” to take a totally mercenary approach to investing. “Hold your nose and hit the ‘buy’ button,” he advises, “because banking stocks are thundering back after five years in the garbage dump.

“Earlier this year, the financial sector was a bloody mess of busted charts and broken trades. You had no business going anywhere near it.

“Now the Financial Select Sector SPDR (XLF) is hitting new year-to-date highs. Banks are starting to outperform the S&P 500. And short-term interest rates are finally starting to rise — which is huge for banks that have suffered years of historically low rates. 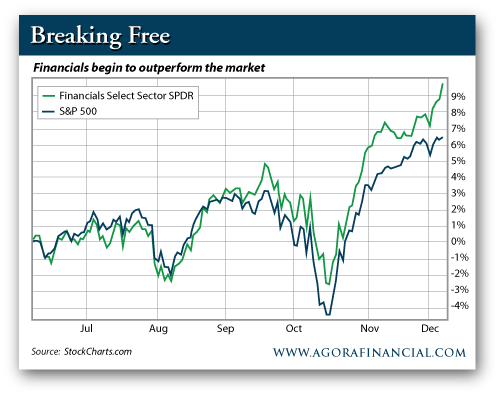 “After its furious rally off the October low, XLF is now up nearly 10% over the past six months, compared with a gain of only about 6.5% for the S&P 500. Sure, they’re late to the party. But these stocks are primed and ready for serious gains heading into the holiday season.”

Crude is swooning to new lows last seen in the spring of 2009. At last check, a barrel of West Texas Intermediate has tumbled nearly 4% this morning, to $63.26.

“While low oil prices are hurting several industries and even countries, others are benefiting from the decline,” says our income specialist Neil George.

Last week, we spotlighted how China is lending a financial hand to strapped oil producers like Russia, Iran and Venezuela… and how China’s “Big Three” oil stocks have held up much better than their counterparts elsewhere in the world.

One of them, Cnooc (CEO), is a holding in the Lifetime Income Report portfolio. “The company is one of the best when it comes to long-term investment and successful planning,” says Neil.

“In fact, it’s been making the best of the lower prices, buying up as much of the cheap oil as it can. It’s expected to increase its oil buying by over 700,000 barrels a day, which is nearly half of the world’s current production glut.”

With the share price settling back from recent levels, the dividend is up to 4.2%. Hmmm…

“It’s about paying taxes — money, your beat,” writes a reader, encouraging us to speak up about the chokehold death of Eric Garner at the hands of New York police.

“I hear the guy was selling ‘single cigarettes’ cheaper than normal and avoiding the tax they have there. Apparently, the local shops called the cops on him.

“The lesson is be sure you pay your taxes, or the government, whether local or national, may put you in jail.”

The 5: Great minds think alike: We planned it even before we checked the weekend mailbag this morning.

In light of our comments above on the banks, we take note of this tweet from comedian Chris Rock. 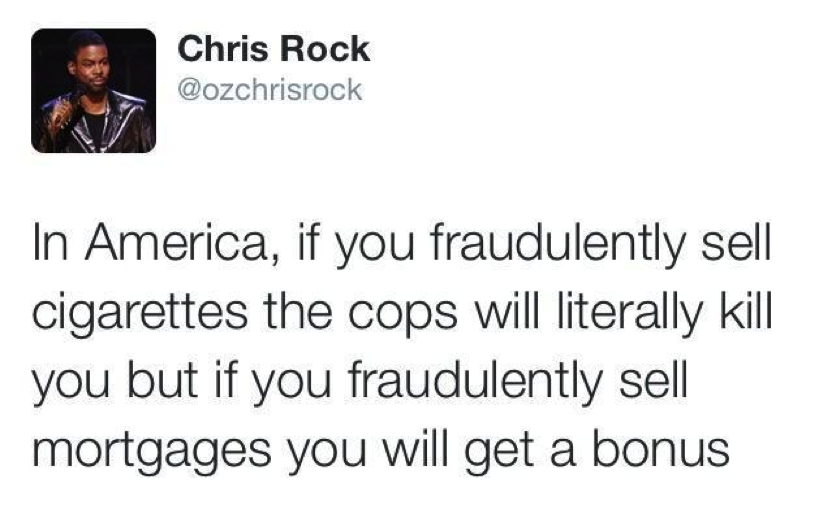 Actually, it’s worse than Mr. Rock portrays the matter. For no one accused the late Mr. Garner of anything fraudulent. “Fraud” would entail adulterating the cigarettes with shredded newspaper or some such. Near as we can tell, Garner had only satisfied customers for his smokes.

The cigarette tax in New York City is $5.85 a pack. “According to figures last year,” writes Walter Olson at the Overlawyered blog, “New York’s unusually high cigarette taxes had brought it an unusual distinction: an estimated 60% of consumption there is of smuggled or illegal cigarettes, much higher than any other state.

“Another way to think of it is that New York has moved closer to prohibition than to a legal market in tobacco.”

We pause here to note that last Friday, it was 81 years to the day since alcohol prohibition was repealed via the 21st Amendment.

“Eric Garner,” sums up J.D. Tuccille at Reason, “was murdered for the purposes of revenue enhancement.”

“As an aspiring and eventually retired geophycisicst working around the world, I was very happy to see the above-mentioned boots,” a reader writes after our mention Friday how L.L. Bean’s classic boots are hot sellers nowadays.

“These were de rigueur for working in the Canadian north. When they were not fashionable but necessary for winter work, they were referred to as RBLTFL. That being ‘rubber bottom, leather top, felt-lined.’ I guess the FL part is a sop to the extreme cold outdoor conditions in Canada. That goes back 30-40 years!”

“Some 15 years ago, when I saw the emerging trend of distressed clothing referred to as ‘shabby chic,'” writes another, “my thought was that the market was trying it on to get used to being poor.

“Turns out I was right. Lumberjack boots are much more serviceable than high-end loafers when you’re living out of a backpack.”

“I am in good shape,” adds a third. “I have had a pair just like them in my closet for about 20 years now. They are a sexy green with yellow shoestrings. Vogue always comes back around.”

The 5: The boots are handmade, and the company says teaching someone the hand-stitching method takes six months. Looks as if the backlog won’t be relieved anytime soon…

P.S. Aside from the above-mentioned big gift to the bankers, there’s something else lawmakers are certain to get done this week as they scramble to put a new budget in place.

But you’ll want to move quickly: Congress has to pass something by Thursday to avert that “partial government shutdown.” Besides, they want to get back to their home districts. So check it out while there’s time.