In isolation, it sounds like a boring, irrelevant story.

“China’s foreign minister has pledged support to Russia as it faces an economic downturn due to sanctions and a drop in oil prices,” reports the Russian state-owned TV network RT. “Boosting trade in yuan is a solution proposed by Beijing’s commerce minister.”

In fact, it’s another development cementing what our Jim Rickards labels an “anti-dollar alliance.”

China and Russia are in on it… but they’re not alone. “Other countries,” says Jim, “including BRICS members Brazil, India and South Africa, have joined Russia and China to build institutions that could replace the balance of payments lending of the International Monetary Fund (IMF) and the development lending of the World Bank.

“All of these countries are clear about their desire to break free of U.S. dollar dominance.”

As EverBank’s Chuck Butler reminds us in today’s Daily Pfennig, China has stepped up in the last two months with $2.3 billion of aid to Argentina and $4 billion to Venezuela. “The IMF, led by the U.S. of course, must be fuming right now,” says Chuck, “for they have been the ‘lender of last resort’ for decades, and now China is taking away their business.”

The IMF sees where all this is going… and it’s bad news for the dollar.

Jim Rickards points us to a Bloomberg story from earlier this month: “In late 2015, the IMF will conduct its next twice-a-decade review of the basket of currencies its members can count toward their official reserves.

“Including the yuan in this so-called Special Drawing Rights system would allow the IMF to recognize the ascent of the world’s second-biggest economy while aiding China’s attempts to diminish the dollar’s dominance in global trade and finance.”

“This is one more step in the direction of reducing the lead role of the U.S. dollar,” Jim explains.

“The decline of the dollar as a reserve currency started in 2000 with the advent of the euro and accelerated in 2010 with the beginning of a new currency war. That decline is now being amplified by China’s emergence as a major creditor and gold power. Not to mention the actions of a new anti-dollar alliance consisting of the BRICS, Iran and others.

“If history is a guide,” Jim goes on, “inflation in U.S. dollar prices will come next.”

For an object lesson, we examine the holder of the title “world’s reserve currency” — the British pound.

Conventional wisdom says the dollar displaced the pound after the Bretton Woods Conference of 1944. Jim says it was in fact a slow-motion process beginning 30 years earlier.

“The real turning point was the period July-November 1914,” he explains, “when a financial panic caused by the start of the First World War led to the closures of the London and New York stock exchanges and a mad scramble around the world to obtain gold to meet financial obligations.” The British borrowed heavily, especially from the U.S., to finance its war costs.

It was all downhill from there. “In 1939, England suspended gold shipments in order to fight the Second World War, and the role of sterling as a reliable store of value was greatly diminished,” says Jim. “The 1944 Bretton Woods Conference was merely recognition of a process of dollar reserve dominance that had started in 1914.”

That’s the historical backdrop: Here’s the impact on ordinary Britons.

“During the glory years of sterling as a global reserve currency,” says Jim, “the exchange value of sterling was remarkably stable. In 2006, the U.K. House of Commons produced a 255-year price index for sterling that covered the period 1750-2005.

“But once the sterling lost its lead reserve currency role to the dollar, inflation exploded. 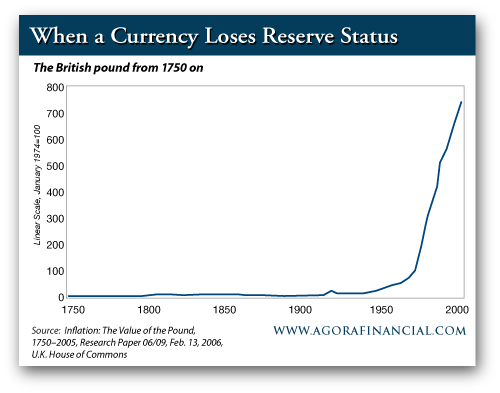 We described one of them a few days ago: It will pinpoint stocks affected by the currency wars, aiming for double- and triple-digit gains within weeks.

The other draws on Jim’s experience with the U.S. intelligence community, identifying “triggering” events that can generate substantial short-term gains.

Each of these services will cost $2,500 annually when we launch them early next year. But through next Sunday, you have the chance to secure lifetime access for a shockingly low cost. And you’ll have access to Jim’s first recommended trades before we offer this service to the general public. Click here for full details of this limited-time offer.]

The Santa Claus rally has lifted the Dow Jones industrials above 18,000 for the first time this morning.

The Dow is the strongest performer among the major U.S. stock indexes as we write. The S&P 500 is also in record territory, at 2,083.

The last of those three reports also includes “core PCE,” the Federal Reserve’s preferred measure of inflation. At a 1.4% year-over-year increase, the number is nowhere near the Fed’s 2% inflation target. Indeed, it’s slipping further away from that target.

Which makes Jim Rickards’ forecast earlier this week look all the more likely — no interest rate increases next year and a return to “quantitative easing” the following year.

This won’t help Ukraine climb out of its massive economic hole: About 11 kilograms of gold bars held by the central bank — some $400,000 worth — turn out to be gold-painted lead.

“The management of the central bank’s branch in Odessa asked us to investigate fraud by their employee,” a police spokesman tells Bloomberg. “We are conducting a forensic audit now.”

The central bank is responding to the fiasco by implementing a new policy: It will no longer buy gold over the counter from the public. Alrighty then…

Auto sales are set to slow next year — opening up an opportunity in the eyes of our Jonas Elmerraji.

“J.D. Power estimates retail vehicle sales will grow 1% in the year ahead,” says Jonas — “compared with mid-single-digit growth in 2014 and the years that preceded it.”

That’s bad news for one of the darling IPOs of 2014, TrueCar. It offers an ingenious service: Rather than haggle with a car salesman, TrueCar’s website shows you what other car shoppers have paid for the model you’re looking at, and it provides a bottom-line price that your local dealers are willing to offer. “All you have to do,” says Jonas, “is walk into one of 8,000 dealer showrooms with your TrueCar printout and they’ll honor that price.”

Too bad TrueCar doesn’t make any money. It brings in $191 million in revenue… and the market cap is $1.7 billion.

“That’s a fat valuation,” says Jonas. In the latest issue of Penny Stock Fortunes, he identifies another player in the sector that’s a downright bargain — good for a potential 75% payout in the year ahead.

“Got a nice chuckle out of the tantrum tosser who yelled at you about the Penny Stock Fortunes portfolio,” a reader writes after yesterday’s episode.

“Seems that he or she must not have done much homework on the PSF approach and is of the mistaken belief that Jonas is chasing the one-, two- and three-centers languishing at the bottom of the various exchanges.

“Well, the current PSF holdings are stocks whose entry points ranged from a buck and change up to $38, hardly the stuff of penny stock mythology.

“But as you experience daily, and regularly share with the readers, sending you an email sermon is always easier for many readers than is actually researching the subject matter of said sermon.

“As always, thanks for sharing the bad with the good. Happy Holidays to the staff at The 5, and the satisfied readers, and wish for a bit less misery in 2015 for the happiness-challenged folks!”

“I among the many am tired of all the almost-daily advertising!” reads an email we should have anticipated after Friday’s episode.

“I understand you are a business that wants to expand and make more money… it’s America… nothing wrong with that! Here is what is wrong… wasting my valuable time reading ads and watching long obnoxious videos to hawk a product. Sir, it’s my time you are wasting, not yours!

“I have gotten to the point where many times I just do not open anything you send on email… so maybe I miss a view or two I will pick it up later… Sometimes I believe the only way not to be bothered by your obnoxious, long-winded advertising is to simply drop out!

“So for all the effort you made to have me become your customer, why won’t you change the way you do business? After all, I am not the only one saying the same thing!”

The 5: You don’t think we have smart people around here who spend much of their time contemplating questions like, “Is this one too many emails to send this week?” Or “Which will generate more response — a presentation or straight-up text?”

Fact is, they agonize about that stuff. After all, our goal isn’t to create customers… It’s to create happy customers.

Alas, we can’t be all things to all people…

“When thinking about money,” a reader writes, “it helps to scrap economists and other highly educated people and think like a peasant farmer.

“I had an education in money. I was in Korea when the won dropped to zero. The common folks invented a new money in minutes. Money is a magnificent human invention — no, governments had nothing to do with inventing it. There are very few genuine rules:

1) It’s a belief system. When everyone believes in it, it has value.

2) Everyone must have approximately the same agreement as to its value.

3) We peasants have to be able to keep it under the bed.

“If it doesn’t keep these three rules, it’s not money. Bitcoins are a good idea, but you need a complex, computerized environment for them, and you can’t keep them under the bed.

“This is simplistic thinking. I dare you to publish it.”

P.S. The U.S. stock market trades for a half-day tomorrow and is closed on Thursday for Christmas Day. The 5 returns on Friday.

Yesterday’s market action was even more extraordinary than the mainstream is letting on, but gold cushions the blow. Read More

Our crypto expert Chris Campbell admits: “From NFTs to DeFi to metaverse, we’re in a bit of a rut.” Read More

The price of natural gas in these United States is now the highest since 2008. Where to from here? Read More