There’s nothing like a wide-scale war to cast a pall over the economy and the markets. And if such a war is in the offing during 2015, these will be the people who get it cranked up… 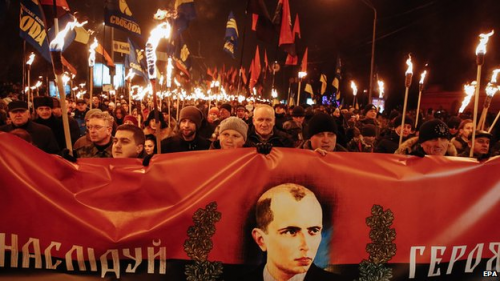 “Ukrainian nationalists have marched through Kiev,” reports the BBC this morning, “to honor the World War Two anti-Soviet leader Stepan Bandera.”
In the newspeak of the establishment media, “Ukrainian nationalists” means “neo-Nazis.”
On Wednesday, we got a jump on our 2015 predictions — our editors showing their hand for the new year. Today, however, we pause to consider a geopolitical wild card… and we mean neither ISIS nor North Korea, which grabbed most of the headlines in recent months.
“The most determined push for war in 2015,” writes the estimable Pat Buchanan in his syndicated column, “will come from neocons and interventionists who want a U.S.-Putin confrontation and regime change in Russia. And as Russia has a nuclear arsenal to match our own, this is a matter of real gravity.”

First, a refresher about what took place in Ukraine last year: On Jan. 28, the State Department’s top diplomat in Europe — Victoria Nuland — was on the phone with the U.S. ambassador to Ukraine, plotting regime change.
She described some of the people she wanted installed in power once protesters in Kiev got around to removing the elected president Viktor Yanukovych from power. But that part was overshadowed in the media by her foulmouthed complaint about the European Union: “F*** the EU.”
Ms. Nuland did not bother to hold this conversation on a secure line. A recording of the phone call — presumably captured by the Russians — wound up on YouTube a week later. Good job of “OPSEC,” eh? (She still has her job, if you’re wondering.)
Less than a month after the phone call, the protests in Kiev reached a crescendo. EU negotiators brokered a compromise between the Russian-leaning President Yanukovych and leaders of the European-leaning opposition. A pre-2010 constitution would be restored and Yanukovych would call early elections.

That wasn’t good enough for the neo-Nazis. Long story short, they took over the parliament building in Kiev. Yanukovych fled to Russia. Regime change, mission accomplished.
The new pro-Western government in Ukraine made many concessions to the neo-Nazi factions, which go by the names Svoboda and Right Sector. Neither party is much of a force in the current parliament… but that’s because many of their most extreme members joined up with the “mainstream” People’s Front of Arseniy Yatseniuk — Ms. Nuland’s handpicked prime minister, identified as “Yats” in her infamous phone call.
Svoboda and Right Sector are the hotheads who marched in Kiev last night, honoring the memory of Bandera — whose paramilitary forces fought the Soviets, yes, but also collaborated with the Nazis in the extermination of Poles and Jews.
Speaking to the crowd was the Svoboda leader, Oleh Tyahnybok. Back before the coup that ousted the Russian-leaning Yanukovych government, Tyahnybok called for the liberation of his country from the “Muscovite-Jewish mafia.”
No, you don’t hear much about this from mainstream media. It doesn’t square with Washington’s narrative that these people are all budding Thomas Jeffersons, courageously holding the line against that dastardly Vladimir Putin.

And it’s this crowd of choirboys that’s now in line to collect military aid from the United States.
In December, Congress voted to lay new sanctions on Russia… and authorize the shipment of lethal weapons to the Kiev government, which is trying to take back rebellious parts of the Russian-speaking east.
In November, Congress considered an amendment to the annual defense spending bill that would have forbidden U.S. aid to the neo-Nazi factions in Ukraine. It was killed in committee.
“The amendment,” reported Max Blumenthal at AlterNet, “was presented by congressional staffers to lobbyists from the Anti-Defamation League (ADL) and the Simon Wiesenthal Center, two of the country’s largest established Jewish pressure groups. Despite their stated mission to combat anti-Semitism and violent extremism, the ADL and Wiesenthal Center refused to support [the] proposal…
“An ADL lobbyist insisted that ‘the focus should be on Russia,’ while the Wiesenthal Center pointed to meetings between far-right political leaders in Ukraine and the Israeli embassy as evidence that groups like Svoboda and Right Sector had shed their extremism.”

“If it’s real World War III potential you’re looking for, it’s in Ukraine,” we wrote on Feb. 21 of last year — only hours before the Yanukovych government fell.
We cited a number of learned observers: “If the Cold War is over, why are we playing these Cold War games?” asked the aforementioned Buchanan.
“Nuclear powers must not indulge in such schoolyard squabbles,” added the veteran foreign correspondent Eric Margolis.
“It was fools like Nuland playing the great game that gave us World War I,” said former Reagan Treasury official Paul Craig Roberts.
Maybe it sounded alarmist to your ears at the time.
But oil has collapsed since then, and so has the value of the ruble. Pile all that on top of the new Russian sanctions and Ukrainian aid approved by Congress and President Obama last month.
“These moves, given the circumstances, can only serve to reinforce the Russian president’s conviction that the ultimate aim of Western policy is regime change,” writes James Carden at The National Interest. “What has Russia now to lose?”

The major U.S. stock indexes are starting the new year in the red… adding to the losses racked up late on Wednesday. As we write, the S&P 500 is down about eight points, to 2,051.
The December ISM manufacturing survey clocked in this morning at 55.5 — the slowest rate of growth in six months. (Anything above 50 is growth.)

The big moves today are in currencies: European Central Bank chief Mario Draghi delivered a speech warning about deflation… which was enough to send the euro down to $1.20, its lowest level since mid-2010. The dollar index — of which the euro is by far the biggest component — has risen above 91 for the first time since 2005.

For once, dollar strength does not translate to gold weakness: The Midas metal is holding its own at $1,186.
Crude drifted up in wafer-thin holiday trade yesterday after news broke that Saudi Arabia’s 90-year-old King Abdullah was in the hospital with pneumonia. But with word today that his condition is stabilizing, some of those gains have gone away: At last check, a barrel of West Texas Intermediate fetched $53.22.

“The biotechnology frenzy won’t let up in 2015,” asserts Ray Blanco of our tech team.
“Despite two corrections during the spring and the fall, and even Fed head Janet Yellen talking down biotech stocks, major biotech indexes still turned in between 30-40% last year. 2014 was also record year for biotechnology IPOs, with 78 companies. That comes on the heels of an already active 2013.
“2015 is expected to be even better, with some predicting over 100 new listed companies in the sector. Some recent ones are strong contenders with exciting technology and pipelines, but I’m waiting for share prices to settle down before I consider recommending them.
“I expect 2015 to look much the same as 2014, putting in a strong overall performance, with some possible corrections to keep an eye on. However, the name of the game is still picking good companies, not throwing a dart at a board and hoping the general market environment will carry the day.
“A biotech innovator with unexpectedly strong clinical results for one of its drugs is like a small gold miner striking a rich vein of the precious metal. These companies will do well independently of the general market trend.”
For access to Ray’s entry-level biotech and high-tech newsletter, Technology Profits Confidential, look here.

Savor the irony: The French economist Thomas Piketty has turned down the Legion of Honor, the highest honor bestowed by the French government.
As you might recall, Piketty made a splash last year with his book Capital in the 21st Century — a 700-page argument for a global wealth tax.
We noted the sensation it made early on — people jabbering about it being “one of the watershed books in economic thinking.” Add to that the fact that in 2012, Piketty signed a letter supporting Francois Hollande, the Socialist party leader who’s now France’s president. It only figures the French government would grant Piketty an honor with a history going back to Napoleon.
“I do not think it is the government’s role to decide who is honorable,” Piketty told the AFP newswire.
Really? He seems to have a rather expansive view of government’s role otherwise…
“They would do better,” he added, “to concentrate on reviving growth in France and Europe.”

“Dr. Putin is having Russia stock up on gold, and he has openly allied Russia with China, which has also been stocking up on gold,” a reader writes after we noted on Wednesday that Russia is effectively selling all its oil for gold now.
“Doesn’t that tell us something? I wonder whom he is buying all that gold from.
“I don’t think Mr. Obama is a lover of the substance — unless maybe it’s in his own pocket.”
The 5: “Imagine,” writes the globe-trotting reporter Pepe Escobar, “Russia and China jointly investing in a new gold, oil and natural resource-backed monetary union as a crucial alternative to the failed debt ‘democracy’ model pushed by the Masters of the Universe on Wall Street, the Western central bank cartel and neoliberal politicians.
“They would be showing the Global South that financing prosperity and improved standards of living by saddling future generations with debt was never meant to work in the first place.”
We’ll have a lot to say in the new year about Russia and China… starting next week.
Best regards,
Dave Gonigam
The 5 Min. Forecast
P.S. A special message from Laissez Faire Club director Doug Hill:
“Just wanted to let you know that a FREE hard copy of our 416-page Laissez Faire’s 2015 Guide to Happiness has been reserved for you… and I want to make sure you receive it.
“This incredible new guide is full of useful and actionable advice such as:

“These strategies,” Doug tells us, “are incredibly easy to implement and could have a huge impact on your life, health and wealth in the coming year.”
Click here now to learn how to get your FREE copy.