Hey, whaddya know? Tomorrow is another make-or-break, no-kidding, we-really-mean-it-this-time deadline for the mess in Greece to be fixed.
The Greek government is supposed to submit another “reform” plan to eurozone finance ministers at a meeting tomorrow. Otherwise, we’re told Greece won’t get another bailout loan, the global economy will collapse and mankind will revert to hunter-gatherer status.
Oh, what a minute, what’s this? “Greece probably has until late July to come to an agreement with its creditors,” says a dispatch from Bloomberg.
So tomorrow’s deadline doesn’t mean that much after all.
“By contrast,” the article goes on, “a default on marketable debt, specifically the failure of the Greek government to pay 3.5 billion euros due to the [European Central Bank] on July 20, would probably force the central bank’s hand. The Greek government and its creditors are still likely to reach a deal on a list of reforms before that crucial date.”
OK. July 20. Got it. (Hmmm… Your editor has an eye appointment that day. Should I cancel?)
What our executive publisher Addison Wiggin long ago labeled “the world’s longest and most boring financial crisis” rolls on. So no matter what headlines you see in the next 24 hours, don’t worry about Greece.

Worry about this instead: “Good times are ending for corporate borrowers in emerging markets,” says the Financial Times.
Wow, from Jim Rickards’ lips to the salmon-colored rag’s ears. Since January, Jim has been warning us about $9 trillion in dollar-denominated debt issued by companies in emerging markets.
Here’s mainstream affirmation from Alberto Gallo, chief of macro credit research at RBS: “Emerging markets have enjoyed capital inflows and access to cheap dollar funding since the global financial crisis. These strengths are about to become weaknesses: A reversal in Federal Reserve policy, falling commodity prices and rising political risks put EM companies and their debt between a rock and a hard place.”
That was in yesterday’s FT. Here’s more from today’s, following up on an item we mentioned Tuesday, a default by the Chinese property developer Kaisa Group: “Some policymakers and corporations remain oblivious to the problem, says Stephen Jen, head of currency hedge fund SLJ Macro. ‘It’s not that they’re ignoring the elephant in the room,’ he says. ‘They don’t see the elephant.’”

Combine the $9 trillion in dollar-denominated corporate debt in emerging markets with $5 trillion in debt that financed the U.S. energy boom in recent years… and you have a $14 trillion debt tsunami.
Jim Rickards has been banging the drum about it here in The 5 for more than three months. The debt “cannot possibly be repaid or rolled over under current economic conditions,” he says. “If default rates are only 10% — a conservative assumption — this corporate debt fiasco will be six times larger than the subprime losses in 2007.”
Jim’s focused not only on the threat — but also the opportunity. “The new Big Short,” he called it here in Tuesday. The mainstream is quickly catching on… but it’s still not too late to position your portfolio to take advantage of the wipeout.
That’s what Jim’s team learned while back-testing the IMPACT system — designed to spot profit opportunities that result from the currency wars waged by the world’s governments and central banks.
For example, consider the Western sanctions imposed on Russia last year. The ruble crashed and shares of RSX, one of the big Russian ETFs, got clobbered… 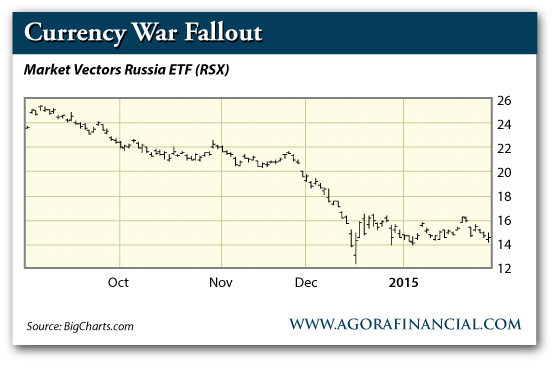 RSX was nearly cut in half… but using the IMPACT system, you could have parlayed that move into a gain of 1,276% in less than a month.
Jim shows you how this proprietary strategy works, step by step, when you click here.

Nothing can move the needle on the big U.S. stock indexes today. They’re all in the red right as we write, but by less than a tenth of a percent.
EBay delivered a sunny earnings report; General Motors, not so much. Industrial giant Caterpillar delivered a big earnings “beat” — which might speak more to CAT’s previous efforts to “guide lower” than any inherent strength in heavy industry.

Indeed, the “flash PMI” numbers for manufacturing so far during April all clocked in this morning below expectations. The U.S., the eurozone, China — they all disappointed. China’s factory sector is in outright contraction, still.
Gold is clambering back toward $1,200, the bid at last check $1,193.

Crude is up nearly 3% this morning for no obvious reason. A barrel of West Texas Intermediate fetches $57.79 — the highest since late last year.
The Wall Street Journal credits the move to a drop in U.S. gasoline supplies. But Reuters speaks instead of that ever-present “Middle East tension.” Get your stories straight, guys.

Oil prices have two tail winds and one head wind right now, says Jody Chudley of our energy team.
The first tail wind: Growth in U.S. production appears to have come to a halt. Jody said back in January the growth would end sometime midyear. At the time, conventional wisdom had it that production would grow throughout 2015, so Jody was sticking his neck out.
As it happens, the slowdown has come sooner than even he expected. In the last five weeks, U.S. production has been in a tight range between 9.38-9.42 million barrels per day, according to the U.S. Energy Information Administration. Meanwhile, Jody tells us “North Dakota production has dropped by 50,000 barrels per day since December.
“The other tail wind is growth in U.S. oil demand. I’ve been watching weekly U.S. oil consumption numbers like a hawk,” says Jody. “Year-on-year demand started surging back in December and has continued through today.”
The increase works out to 671,000 barrels per day. That’s nearly half of the 1.5 million-barrel-per-day glut that emerged when crude prices crashed late last year.
And that’s just the United States. Global is growing too.

“Then Saudi Arabia threw a bit of a curveball at us,” says Jody — invoking the aforementioned head wind for oil prices.
Not only did the Saudi princes opt not to cut production last November… they’ve ramped it up. For most of last year, the kingdom pumped out 9.6 or 9.7 million barrels a day. But last month, it grew to 10.3 million.
“We should remember that this is just one month of data,” Jody cautions, “although based on recent comments by the Saudi oil minister Ali al-Naimi, April production is expected to be about the same.
“I’m cautiously optimistic that the worst of this oil slump is behind us and that slowing U.S. production and robust global demand will push prices higher. Hey, on a positive note, at least we’ve seen an end to oil’s massive downturn
“What the Saudis are doing, though, is a possible fly in the ointment.” Stay tuned…

An important shift in policy is underway at the FDA, says FDA Trader editor Ray Blanco.
Ray has long bemoaned FDA foot-dragging, the interminable bureaucratic processes that keep lifesaving treatments off the market. But now he sees policy loosening, especially when it comes to cancer: “The FDA has shown greater willingness to look at alternative measures of a drug’s effectiveness,” he tells us.
“The FDA’s head of cancer drugs, Dr. Richard Pazdur, has said in recent interviews that we’re in a different world now. He says that the science behind new cancer drugs has become far stronger than in the past.
“This makes the often maligned cancer drug gatekeeper more willing to let new drugs come on the market. Needless to say, that’s great news for biotech traders and investors.
“This new environment also contradicts talk of biotech being in a bubble, since greater likelihood of regulatory approval means biotechnology names are worth more. Why? The risk of failure is mitigated up to a point.”

Japanese innovation ain’t what it used to be. The country that gave us good fuel economy and the first transistor radios now gives us…

As Dave Barry would say, we swear we’re not making this up…

It’s the flip side of “beer goggles” — a beer that’s really supposed to make women look more attractive.
“Precious” beer is marketed to the fairer sex. The unique selling proposition — it has 2 grams of collagen per can.
Uhhh, right. Skepticism abounds. Sure, collagen is great for your skin… but wouldn’t that be offset by the alcohol?
It would, a dermatologist tells Forbes. Heck, it inflames the skin. And at only 2 grams, “there isn’t enough collagen to make a remarkable difference for your skin’s complexion,” says Dr. Ariel Ostad of New York University Medical Center.
To be fair, the creators of Precious make no anti-aging claims. A PR flack for Suntory Holdings Ltd. instead cites “findings that Japanese women wanted to take collagen, so we created this regionally marketed product to meet their needs.”
Moving on…

“In my humble opinion, Jon Corzine should be in jail,” a reader weighs in after we contrasted the case of Corzine with that of the accused “flash crash” instigator Navinder Singh Sarao.
“Corzine and his company violated one of the most basic principles of futures trading — absolute segregation of customers’ funds.
“The CME/CBOT leaders should be in jail with him. Their member firms should have come up with the money for the customers who got screwed. Instead, they had to wait for years.
“If they put Corzine in jail, maybe he can share a cell with ‘Porky the Governor’ Christie. At least Porky seems to like the color orange.”

“If I only had a fifth of the knowledge those two chart chimps have in following equities…” writes another reader rising to the defense of Jonas Elmerraji and Greg Guenthner of our trading desk.
“Just saying. And I’m glad they’re having fun in jest with that sign in yesterday’s 5!”
The 5: Yeah, but it becomes challenging when they start flinging poop outside their cubicle…
Best regards,
Dave Gonigam
The 5 Min. Forecast
P.S. “This Sunday is the eighth anniversary of The 5!” a colleague reminded me by email this morning. “Hard to believe it’s been so long.”
Indeed, our fearless leader Addison Wiggin hit the “send” button on the first issue April 26, 2007.
Many factors go into a successful e-letter. An engaged readership is surely the most important, and our readers are among the best.
Thanks to everyone over the years for your readership — and the lively emails.
Consistency is another factor. Across eight years, only four people have appended their name to the bottom of an issue. Well, five as of tomorrow. Colleague Brian Maher, who brings you our Saturday wrap-up edition, will spell me for a day and take his first crack at the weekday 5. Please be gentle with him. I’ll be back with you on Monday.

If mainstream financial media are to be believed, all of Wall Street’s operating assumptions since the Panic of 2008 have been flipped on their head. Read More

Nomi Prins on the “reopening” economy: “The old model will be supplanted by different businesses.” Read More

It’s the fastest that any technology has reached critical mass — and our resident futurist Robert Williams says it’s not too late to get in. Read More

We hasten to point out this “lockdowns for better climate” thing is not new. But last fall brought a new twist… Read More

“Millennials are just aging to their PEAK buying years,” says Zach Scheidt. This industrywide shift — and others — makes homebuying a trend to watch… Read More

“This trend isn’t going anywhere,” says our tech maven Ray Blanco. “So how can you invest in SPACs for profit?” Read More

Our biggest beef with GDP is that it’s a nigh-meaningless statistical abstraction. Now for a new spin on one of our long-standing complaints… Read More

The global power elite are set to declare a crisis of confidence in the U.S. dollar… Not that they’ll put it in those terms… Read More

Like it or not, a “greener” world will require more electricity, and — surprise — environmentalists are resorting to nuclear power. Read More