Why Did George Bush Buy Nearly 300,000 acres in Paraguay?

Haven’t you always dreamed of owning 298,840 acres of land in… Paraguay?

We haven’t either, to be honest. But former president George W. Bush apparently had. Maybe you missed it, but he purchased all that land back in the glory days of 2005 and 2006. Maybe he thought he was investing in the next great retirement destination…
We can see it now… strip malls in their dozens, tracts of identical houses from horizon to horizon, fleets of Buicks and Cadillacs doing 22 in a 30. 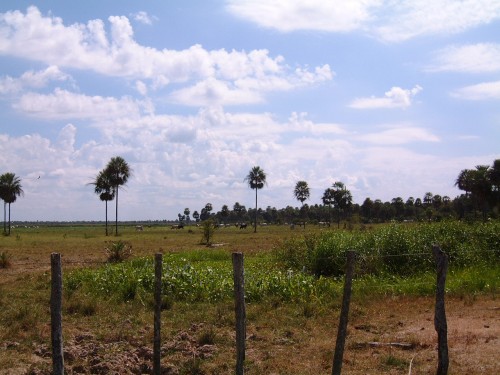 Can’t you see the potential?

Or maybe the Bush clan had something else in mind when they purchased all that acreage in the remote Chaco region of Paraguay…
After all, it does seem an unlikely retirement destination. Bush’s judgment may not have always been the best, but still…
The Chaco is a semiarid, sparsely populated area known — to the extent that it’s known at all — for its abundant wildlife, rapid deforestation, nothing in particular… and what lies beneath it…

Our Real Wealth Trader and Outstanding Investments contributor Jody Chudley thinks he knows the true gen about the Bush land grab.
Jody says he has a “secret” about the Bushes. And he adds, “It has to do with an investment idea that’s hardly on anyone’s radar.”
The real reason Jody thinks Bush 43 and family snapped up nearly 300,000 acres in those semiarid, sparsely populated wastes of Paraguay?
Water.
That’s right, blue gold. Bush bought the rights to a veritable ocean of fresh, clear-as-glass, Grade A water.
His land rests atop one of the largest freshwater aquifers in the world: Acuifero Guarani, by name.
According to Jody, “Acuifero Guarani covers roughly 460,000 square miles under parts of Brazil, Paraguay, Uruguay and Argentina. It is estimated to contain about 8,900 cubic miles of water.”
If you can’t quite imagine 8,900 miles of water, picture a pool nearly three times the size of California. That should give you a decent idea.
A fair amount when you consider that 98% of this planet’s water is salt water.
Of the other 2%, almost 87% of it is trapped within glaciers, hence inaccessible. Jody’s “trusty calculator” informs him that only 0.25% of the water on this cosmic ball is fresh (underground, or in rivers and lakes). Just a drop in the figurative bucket…

“Wouldn’t you love to know what high-level intelligence the Bush family has been privy to over the years that would make them go out and buy hundreds of thousands of acres of water rights in a remote South American country?”
How cheeky of Jody to raise such an impertinent question. But perhaps W knows something we plebeians don’t? Think of all the secret intelligence crossing that fancy English oak desk in the Oval Office.
And do pause for a moment to consider the investing opportunities this could potentially provide. We mention only in passing that his old man happened to be the head of the CIA at one point…
You needn’t own a tinfoil hat to raise an eyebrow here.
Jody came across a piece of 2008 research from Credit Suisse estimating that two-thirds of the world’s population is likely to live under “water-stressed” conditions by 2025. Quite a lot of people, that, and 2025 isn’t exactly the distant future.
You know about the historic drought conditions afflicting California and much of the Western U.S. But Brazil and other parts of South America are also in serious drought. And guess, dear reader, who happens to own a lot of neighborhood water rights? (Out of respect for your intelligence, we won’t answer that one.)
Makes us scratch our head just a bit, though. Does Bush know something none of us knows?
[Ed. note: Water will become an increasingly valuable commodity in the years ahead, Bush or no Bush. And Jody’s found a great way to make money from it.
He advises buying a diversified, low-cost ETF to ride this macro trend. His favorite?
The Guggenheim S&P Global Water ETF (NYSE:CGW)].

This isn’t a new theme to 5 Min. Forecast readers.
Our very own Jim Rickards has been pounding this drum for some time now.
Jim’s noted that “Extreme drought conditions everywhere from Beijing to Bakersfield, and the resulting loss of crops and economic growth, are forcing politicians to come up with better solutions. New risk-management tools are emerging to finance multibillion-dollar projects.”
And like Jody, Jim sees liquid gold in them thar hills: “The entire water sector is poised for explosive growth.” Jim’s also got his eye on suitable investment opportunities in this space. To learn more about that, and a whole lot more, click here.

The latest durable goods orders are out. And the results? Mezza mezz.
Orders for durable U.S. goods jumped 4% in March, topping expectations for 0.6%. But the increase was driven largely by strong civilian aircraft, military hardware and auto orders.
“One key measure of business spending — nondefense capital goods orders excluding aircraft — wasn’t so hot, however. It fell 0.5%. Forecasters were expecting a 0.3% increase.”
A little good, a little bad. Feel free to focus on whichever metric confirms your economic outlook.

Stocks opened slightly higher today, buoyed mainly by a surge in the Nasdaq. The aforesaid index leapt deeper into record territory this morning, building on Thursday’s 5,057 close. The index hasn’t seen these levels in 15 years, in case you’re interested. Better-than-expected earnings from Amazon and Microsoft were the primary catalysts behind today’s jump.
The other major indexes are treading water this morning. The S&P opened slightly higher, the Dow slightly lower. Meanwhile, gold is down $17, and oil is trading around $56.50, off a little over a dollar.

No way, Jose, says Greg Guenthner over at our trading desk, answering this theoretical question: Is it time for you to pull the plug on the cheap oil trade?
Oil spiked to $58 this week, as you’re doubtless aware.
But as Greg informs us, “Look, we ain’t gonna see $100 oil anytime soon. That’s great news for businesses guzzling a lot of fuel.”
So what’s the best way to take advantage of continuing cheap oil, according to Mr. Guenthner? Transportation stocks.
They cooled off earlier this year but are on the move again… 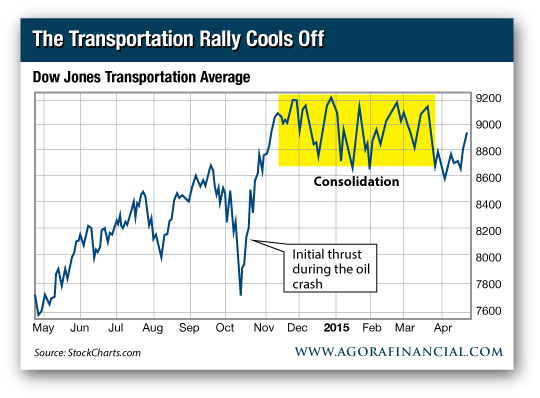 Greg says that “while everyone was looking elsewhere for trading opportunities, the transports were setting up again. Just look at the extreme right side of the chart. After going nowhere for the better part of the first quarter, transports are on the move again.”
Some more great market insight from our resident chart chimp…

The secrets of an 18,000-bagger.
Our itinerant value guy Chris Mayer wings off to Omaha next week to join up to 50,000 souls for the annual Berkshire Hathaway confab. He’ll be getting the state of the union from the Sage of Omaha himself and his right-hand man, Charlie Munger.
The thing is always a kick in the backside, a circus in a dozen rings. Where else can you watch Bill Gates play table tennis against a U.S. Olympian or win a Dairy Queen Dilly Bar for best newspaper throw? 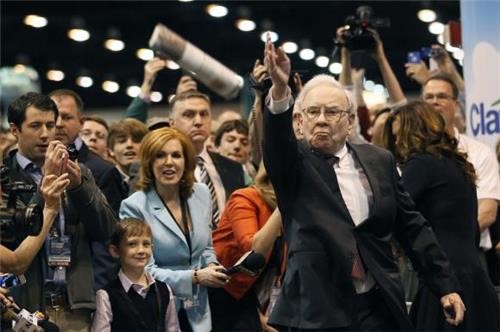 Wonder if he won.

But Chris will be there for the business. He wants to study how Berkshire Hathaway pulled it all off.
It’s part of his latest project researching the elusive 100-bagger, that rare breed of stock turning every $1 invested into $100. And he’s on the hunt for the next ones. Of course, Buffett and his boys have far exceeded that milestone…
It staggers us to even think it, but if you invested $10,000 in Berkshire Hathaway in 1965 and never added a red cent, today you’d be sitting on — we hope you’re sitting down – about $180 million. Talking about buying right and holding on!
Turning $1 into $100 seems downright modest in comparison. And Chris agrees:
“An 18,000-bagger is outrageous. It boggles the mind. No one may ever match it. But so what? How about a mere 100-bagger? The template is there.”
And Chris thinks it’s possible to identify the next 100-baggers. How? According to Chris, “At bottom, what you need is a lot of growth in the value of the business on a per share basis.”
Sounds like a plan. But Chris would be the first to tell you it takes more than that. He’s going at it hammer and tongs, though. And we’ll be keeping you updated on his ambitious 100-bagger project.

Kudos to your reader concerning Corzine,” writes one reader in reference to another’s argument that the former New Jersey governor and hedge fund dude should end up behind bars for violating trading laws…
“I was an NYSE and Nasdaq arbitrator for years… Based on the facts, Corzine should be sporting jailbird stripes in some prison yard. But oh, no… He walks the streets in his Guccis and has the cojones to talk of starting a new hedge fund… Only in America!!!!!!!!
“How do you spell banana republic?”
The 5: Looks like you got the spelling more or less right.

“In the Corzine/Christie cellmate comments yesterday,” writes another reader, “let the reader watch his comments about Gov. Christie being porky. I support Christie — quite proud of it. Many of us do.”

Taking further exception to the “Porky” snark, yet another reader complains, “Really? Why would you guys even repeat such an asinine reader comment? Nevertheless, entertaining as always!”
The 5: That’s just how we roll ’round here. And asininity is in the eye of the beholder. Glad you find it all entertaining, though.

“The Japanese marketers have it all backward.” That’s one reader’s take on one Japanese beer-maker’s marketing campaign targeting women. They added collagen to their beer to supposedly help skin complexion.
“They need to market more beer under a slogan like ‘The more you drink, the better the women look’ or something like that.”

In yet another reference to beer goggles, one reader adds, “Huh! All consumption of beer makes all women more attractive. The more beer, the more attractive they become!”
The 5: We agree. But only to a point. Beer can only do so much…
That’s it. It’s been a pleasure.
Brian Maher
The 5 Min. Forecast
P.S. Dave will be back in the saddle on Monday to bring you another riveting issue.

When it comes to the tech sector in 2022, Ray Blanco says it pays to be “choosy.” Read More