"They Don't Have the [Expletive Deleted] Money"

“You came, you shopped, you dressed nice — you went to the mall. That’s what people did,” recalls Seph Lawless — the pseudonym of a photographer who grew up in the suburbs of Cleveland.
“It was very consumer-driven and kind of had an ugly side, but there was something beautiful about it,” he told The Guardian last year. “There was something there.”
But no longer. In the same way other photographers have captured iconic images of decay in Detroit… Lawless has captured the essence of moldering malls. He’s even published a coffee-table book. On the cover is what’s left of the Rolling Acres Mall in Akron, Ohio — which closed in 2008. 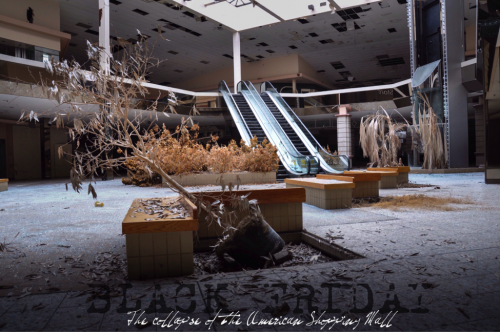 Up to half of U.S. shopping malls will be gone in another 15-20 years, says Howard Davidowitz — a longtime consultant and investment banker to the retail sector.
The survivors will be those with high-end anchor stores like Saks Fifth Avenue and Neiman Marcus. But midmarket malls? “They’re going, going, gone,” Davidowitz says.
Is it the Amazon effect? Not really: Online still accounts for only 13% of retail sales. A return of the masses from the suburbs to city centers? No: As we noted last month, Census figures show even those hipster millennials are gravitating toward suburbia.
So what gives?
“This isn’t rocket science,” says Davidowitz. “What’s going on is the customers don’t have the f(#&ing money.”
Oh… that.

Which brings us to this morning’s “income and spend” report from the Commerce Department.

Nearly every month for the past year, personal incomes have been growing at a faster clip than consumer spending. Whatever money comes their way, people have been trying to squirrel some of it away or pay down debt.
But not in March. Personal income was flat, while consumer spending grew 0.4%.
We caution one month does not a trend make. The year-over-year figures still show income growing faster than spending. Or as a summary from Econoday puts it, “the data suggest that people remain somewhat cautious in their spending despite months of cheaper gasoline and rising confidence.”
By the way, this report also includes “core PCE” — the Federal Reserve’s favorite measure of inflation. It registers a year-over-year increase of 1.4%. That’s nowhere near the Fed’s 2% target, but a months-long decline in the number now appears to have been arrested since the first of the year. Stay tuned…

Major U.S. stock indexes are tumbling this morning for no obvious reason. Blue chips are holding up somewhat better than small caps: The Dow is down a third of a percent, at 17,972, but the Russell 2000 is down 1.25%, to 1,231.
Gold got thumped shortly after the Comex opened this morning. At last check, the bid was down more than 2%, at $1,180. Can’t blame it on dollar strength, either — the dollar index sits nearly unchanged at 95.
Bonds are selling off too, sending yields up. The yield on a 10-year Treasury is just shy of 2.1%.
Crude is little moved, at $58.68.

“Biotechs are definitely losing steam these days, and the worst could be yet to come,” warns Greg Guenthner — adding a trader’s perspective to Stephen Petranek’s remarks here on Tuesday.
“There’s no way to predict exactly how far these stocks will retreat. But they are slowing down.” Greg directs your attention three items on this chart of XBI, one of the biotech ETFs… 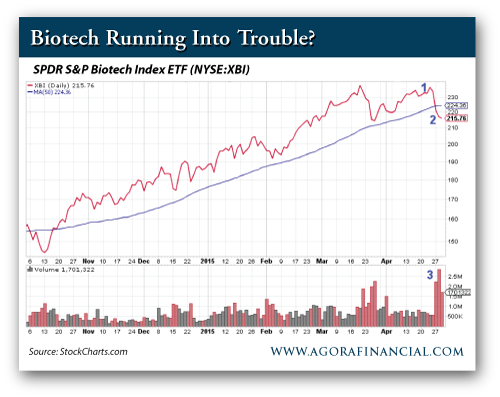 1. A rally this month failed to top March’s highs. “That’s a sure sign momentum is fading,” says Greg.
2. The share price has fallen below the 50-day moving average — something it didn’t do during pullbacks in February and March.
3. Check out the bottom part of the chart — volume. It’s high on days the share price is dropping. “That’s not bullish, my friend.

“The big biotech bull might not be over just yet,” Greg cautions. “But it is showing signs it needs an extended break.”

From the “Where’s the justice?” file, we see Ben Bernanke has landed yet another cushy post-Fed gig.
Bernanke will become a “senior adviser” at Pimco — the giant bond manager once run by the legendary Bill Gross.
Only last week, he signed on with the hedge fund Citadel. “There won’t be anymore,” he tells Reuters. “They (Pimco and Citadel) prefer not having me consult too many firms, and I personally think working with two firms will be plenty.”
Well, yeah… in addition to a post at the Brookings Institution. And don’t forget the lecture circuit, where he collects $200,000 a pop.
Not bad for someone known to have committed perjury at least twice…

Then there’s the matter of Bank of America taking over Merrill Lynch during the Panic of 2008. At the time, BofA CEO Ken Lewis failed to inform his shareholders about Merrill’s huge losses. After the losses became public, Lewis testified in 2009 he was acting on orders from Treasury Secretary Hank Paulson… who was acting “at the request” of Ben Bernanke.
Either Lewis was committing perjury or Paulson was ordering him to break securities law. Yet they and Bernanke all walk free today. 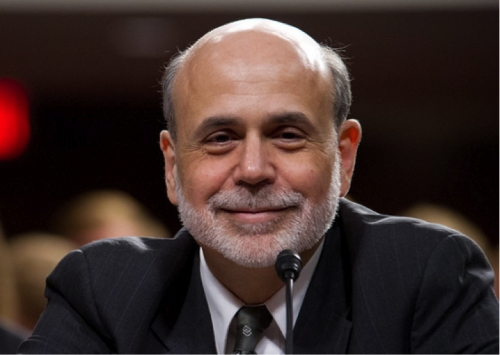 We can’t help but contrast Bernanke’s success with the plight of a small businessman named Craig Patty.

Mr. Patty owns a small trucking company in Texas. He had two trucks to his name in 2011… when the Drug Enforcement Administration got the not-so-bright idea to use one of them in a sting against the Zetas — one of Mexico’s most violent drug cartels.
The operation was a cluster from the get-go. The DEA convinced one of Patty’s drivers to become an informant. He then hauled a cargo of marijuana from the Rio Grande Valley to Houston… where DEA agents supposedly would sweep in and arrest Zeta members.
But the Zetas caught onto the scheme. As the driver approached his destination, Zetas in SUVs converged on the truck… and got into a firefight with plainclothes cops that were supposed to be protecting the truck. The driver was killed and the truck was shot up.
(Friendly-fire bonus points: A Houston cop shot and wounded a Harris County Sheriff’s deputy.)

Mr. Patty — who had no clue the scheme was going down until it was so badly botched — sued the DEA.

He sought just compensation: Not only was his truck riddled with bullet holes, but it was out of service for months while the DEA held it for evidence. To say nothing of how he and his family might become future targets of the Zetas.
More importantly, “Patty had said from the start his main goal was to shed light on the case and have the facts be known publicly,” reports the Houston Chronicle.
On Monday, a federal judge in Houston told Mr. Patty to go pound sand: The feds owe him nothing.
The newspaper says the ruling will spare the government a “potentially embarrassing trial.” Which is the point, right?
Oh, yeah — Patty can’t collect insurance money, either. The truck was used in the commission of a crime, dontcha know.

Nor does the outrage end there. Let’s connect a few more dots…

We’re not sure what to conclude from Mr. Patty’s story… other than he’d have been much better off working on Wall Street or in government or in central banking than in trucking.

“Your reader’s ‘scientific calculations’ for inflation adjustment were spot on,” a reader writes after yesterday’s episode, “but this just happens to coincide with a vivid event from 1965 I remember as a 10-year-old boy: Mom’s Mustang.
“My monetary conversion doesn’t seem as algebraic as your other reader’s calculations, but you’ll get my gist. Mom bought a brand-new 1966 Mustang, fresh off the lot in 1965. Fire-engine red (it was kind of orange), Pony interior, 289 V-8 automatic, with Pony spoke wheel covers, which got stolen on a very routine basis.
“Lee Iacocca deserved all the accolades he received for this car, and Mom’s was the envy of the neighborhood. She (the Mustang, not Mom) was loaded. Dad was so proud he got it for $1,900. That car was ‘cool’ in my 10-year-old eyes! Heck, it’d be cool now if I still had it!
“So here goes: You could buy five 1966 Mustangs at that price back then and have $500 left over out of your 10 grand. So how much would five Mustangs cost nowadays? I’d say at about $30K a car, it would run you about $150K for five Mustangs in today’s dollars. So there you go, Dave, my 1965 inflation adjustment.
“I have to agree with your comments, though. ‘When the gains become that big, nothing short of Weimar-style hyperinflation matters much, no?’
“Yeah, $180 million would be one heck of a nest egg. I can’t even fathom how much that truly would be!
“Always enjoy The 5!”

“Dave, thanks for keeping all of us in the loop about events in Baltimore,” a reader writes. “I’m relieved that all of you have come through safely (Except Addison’s favorite lunchtime haunt.) Stay home if things get iffy. It will only be more fun when things return to ‘normal.'”

“You need to move the Agora Financial offices to Montana — eastern Montana,” a reader writes from that neck of the woods.
“Sidney, Montana 59270… Great weather, far horizons, Bakken region now down to a tiny amount of traffic compared with 2½ years ago when I got here.
“Easy to get anywhere else in the world. No riots. Lots of jobs. good pay.
“Now, if government at the local, state and federal levels would get out of the way, Baltimore could once again prosper and grow. My wife graduated from Johns Hopkins nursing school in 1973. I lived in Baltimore County. Graduated from Towson High in 1968. Nice community then. Too much junk now.
“I think I will stick in Montana. Good luck, and stay alert.”

“Chris Campbell’s words are chilling and Orwellian,” a reader writes after we directed folks to his Laissez Faire Today dispatches from the front lines.
“It sounds like the reporters contrived to make these protests more than they actually were. Or is that just my crooked thinking from what he wrote?”
The 5: You can be forgiven for thinking that. There’s an inevitable “fog of war” that descends over fast-moving events like these.
Last night was calm. Over the dinner hour, a group of more than 1,000 — mostly high school and college age, it seems — marched peacefully and purposefully from the big train station through the Mount Vernon neighborhood downtown to City Hall and back.
We might have more thoughts to share as the week winds down. But our 5 Mins. are dwindling today…
Best regards,
Dave Gonigam
The 5 Min. Forecast

If mainstream financial media are to be believed, all of Wall Street’s operating assumptions since the Panic of 2008 have been flipped on their head. Read More

Nomi Prins on the “reopening” economy: “The old model will be supplanted by different businesses.” Read More

It’s the fastest that any technology has reached critical mass — and our resident futurist Robert Williams says it’s not too late to get in. Read More

We hasten to point out this “lockdowns for better climate” thing is not new. But last fall brought a new twist… Read More

“Millennials are just aging to their PEAK buying years,” says Zach Scheidt. This industrywide shift — and others — makes homebuying a trend to watch… Read More

“This trend isn’t going anywhere,” says our tech maven Ray Blanco. “So how can you invest in SPACs for profit?” Read More

Our biggest beef with GDP is that it’s a nigh-meaningless statistical abstraction. Now for a new spin on one of our long-standing complaints… Read More

The global power elite are set to declare a crisis of confidence in the U.S. dollar… Not that they’ll put it in those terms… Read More

Like it or not, a “greener” world will require more electricity, and — surprise — environmentalists are resorting to nuclear power. Read More