In its own words, the White House blueprint “proposes to eliminate aggressive Social Security claiming strategies, which allow upper-income beneficiaries to manipulate the timing of collection of Social Security benefits in order to maximize delayed retirement credits.”

You can rest easy if you’re an “upper-income beneficiary” or figure on becoming one soon. The idea doesn’t have a prayer of passage in Congress. Not this year anyway, and probably not next.

But at some point, we anticipate it will catch on — especially as we get closer to 2033 or whatever year the Social Security “trust fund” is supposed to be depleted. Consider our lead item in today’s 5 an early warning…

The “loophole” that has the budget wonks’ boxers in a wad is something called “file and suspend.”

But instead of following this path, you “file and suspend” — forgoing your own benefits until as late as age 70 while your spouse files to collect spousal benefits. Doing so accomplishes the following…

Assuming you and your spouse live to a ripe old age, you’ll boost your total income in those later years… and if you die first, your spouse gets the higher survivor benefit.

The Social Security Administration would achieve a savings of $9.5 billion a year if the feds put the kibosh on file and suspend, according to 2009 research by Boston College.

In the big scheme of things, it’s not much — barely 1% of the $863 billion in benefit checks the Social Security Administration issued during 2014. But for the people who advocate killing file and suspend, it’s more about — drumroll, please — fairness.

“Who gains?” muses Boston College’s Alicia Munnell in a recent column at MarketWatch. “Some obvious criteria include: 1) the individuals must be married; 2) at least one member of the couple must be healthy enough to delay claiming until 66; and 3) both spouses must have an earnings history. These facts tend to tilt the benefits toward higher-earning households.”

“Eliminating this option is an easy call,” Munnell concludes, whispering in the White House’s ear.

Let’s sum up: If you’ve worked hard to create a strong marriage, you’ve taken responsibility for your health and both of you have been feeding the beast as wage slaves for the last 40-odd years… you’re gaming the system if you file and suspend. Sheesh.

Again, the likelihood that file and suspend will be ashcanned is negligible in the next two years… but it will surely rise after that as Social Security’s dire straits become too big to ignore.

Meanwhile, we once again wish to direct your attention to the possibilities that come with piggybacking on Canada’s version of Social Security. As we noted on Tuesday, the Canada Pension Plan runs a surplus. Its reserves have doubled in the last 10 years.

You can collect as much as $4,700 a month in “benefits.” We know of a fellow from Arizona who retired from a sales career about a year ago. He’s collecting upward of $3,800 a month. You don’t even have to wait to retire. Heck, you can start at any age. Discover how to take advantage by following this link.

Stocks are moving up on this Wednesday, traders evidently shrugging off the news Harry Shearer is leaving The Simpsons.

Seriously, there’s no market-moving news to be seen out there. At last check, the S&P 500 was up three-quarters of a percent, at 2,114.

The one economic number of note this morning is first-time unemployment claims — 264,000 last week.


That’s three straight weeks the number has been running at 15-year lows. Which sounds fine, except…

What about the quality of the new jobs that have emerged during “the recovery”?

First, a bit of background. Remember this chart we used to run every so often? It documented the job recovery from every U.S. recession since World War II. 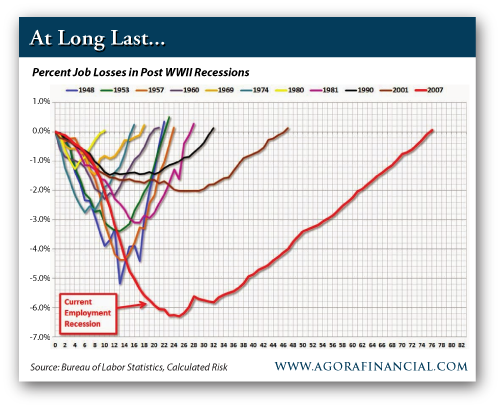 The big, long red line is the so-called Great Recession. It wasn’t until May of last year that all the jobs lost starting in December 2007 had been regained.

Turns out there’s less than meets the eye: The number is skewed by all the nurses and teachers and social workers in the modern-day workforce.

Mr. Stockman explains: “There were 109.1 million jobs outside of the HES complex (health, education and social services) posted by the BLS back in December 2007 when the previous business cycle peaked.” Fully 8.2 million of those jobs — manufacturing, construction, retail, finance, you name it — vaporized in the following 18 months.

Only now are we back to zero. “Last Friday’s report showed that there are now 109.2 million jobs outside of the HES complex. That is to say, 100% of the ‘new’ jobs reported on Payroll Friday for the last six years were actually just ‘born again’ jobs.”

Click the chart to enlarge it and study the revealing annotations as Mr. Stockman revealed on his Contra Corner website… 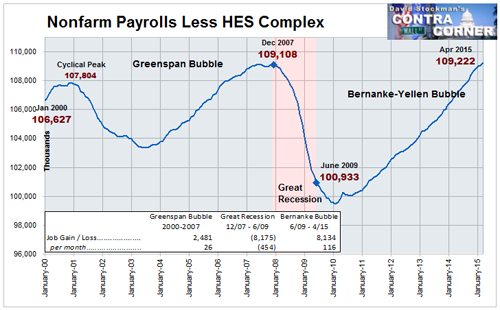 “The internals of these 8 million ‘born again’ jobs were decidedly negative,” he goes on. “Namely, the U.S. economy still has 2 million fewer breadwinner jobs than the 72 million construction, manufacturing and full-time/full-pay white collar and service jobs recorded in December 2007.

“Needless to say, these breadwinner jobs on average pay $50k per year and are the heart of the productivity-generating and family-supporting economic core of main street America.”

And consider this: There were fewer of those breadwinner jobs in 2007 than there were in 2000.

“Should the current so-called recovery roll over into its destined recession in the next year or two,” Mr. Stockman concludes, “the implication will be that the 2000 high-water mark for breadwinner jobs will never again be breached. Ever.”

Hey Brazil, how’s the World Cup working out for you?


The nation hosted the event last year… and now it’s stuck with 12 new or heavily refurbished stadiums, built for $3 billion.

The government promised they’d continue to generate revenue for years to come from pro soccer games, concerts and such.

Yeah, not so much. The most expensive stadium — a 72,000-seat venue in the capital Brasilia, built for $900 million — is used mostly as a bus depot. 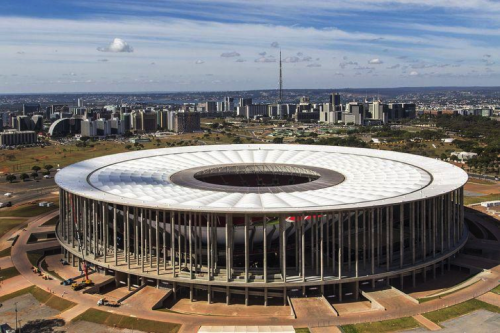 “I don’t see any World Cup legacy to Brazil except the debts we have inherited and the problems we now have,” Brazilian sports reporter Jose Cruz tells NPR.

As it happens, EWZ — the big Brazilian ETF — peaked last September a few weeks after the World Cup ended, around $55. It tumbled below $30 by March and sits this morning at $36.45.

And just think… Brazil has the Olympics next year!

“If something seems to be too good to be true, it usually is,” reads yet another email reacting skeptically to our special report about how to piggyback on the Canada Pension Plan.

“If it is simple (heck, if it is even possible) for Americans to scam the Canadian system, might it not be possible for Canadians to do the same? I know a number of Canadian pensioners that would be happy to glean a few hundred or thousand extra dollars a month from the system. Something here is just not right.”

The 5: We’ll say it again, as emphatically as we can: No Canadians will be “scammed” or otherwise lose a penny of the benefits they have coming to them in the course of Americans piggybacking off the CPP.

Meanwhile, I can assure we have a stringent dot-your-i’s legal department noodling over every idea, strategy, phrase and verb that the promotional writers want to put to paper.

“Your ad copy is too clever and coy by half,” says an email from someone who’s not reading as literally.

“Hardly anyone, I’ll bet, reads the term ‘piggyback’ and doesn’t think ‘participate’. And it’s
true that as a U.S. ‘participant’ (your quotes) in the plan you might possibly increase returns for Canadian participants (no quotes), but it would be through a very indirect, and yes, legal, route.”

“I think the first problem,” writes another reader, “is saying ‘piggybacking’ and all the discussion about not having to be a citizen, going to Canada, etc. It is unnecessary hype.

“In this case, the Canadian group is doing well, per your report. If we mirror them buying all the same choices, we also should do well. Your selection within that mirrored group may or may not do better but sounds reasonable enough to give a try.

“If it really is a good idea, I think it can stand up to a direct discussion.”

The 5: You’re faulting our copywriters for having a vivid imagination? Buzzkill….

P.S. I’ll say it again: I can’t remember the last time one of our sales promotions generated this much activity in The 5’s inbox.

If you’ve somehow resisted exploring how piggybacking on the Canada Pension Plan could deliver anywhere between $400 and $4,700 a month in supplemental income, we urge you to check it out.

The MoneyShow in Las Vegas tends to attract an older crowd. And the aging of the nation can be quite profitable, if you know how to play it.

That was the focus of an interesting session this week where Agora Financial’s income specialist Zach Scheidt was in attendance. Over to you, Zach…

In 2020, the Centers for Medicare and Medicaid Services (CMS) estimates that hospital patients in the U.S. will spend $1.36 trillion for hospital care.

It’s all part of the “graying of America” trend as the population in America gets older.

I heard several statistics like this during the session devoted to health care real estate investing. The bottom line is that demand for health care in the U.S. is set to rise significantly over the next several decades. And this is great news for companies that own and lease properties to health care providers.

It makes perfect sense when you think about it… Buy a hospital, offer a long-term lease to an operating company and sit back and collect the income. It’s an excellent business model that generates a ton of income.

My Lifetime Income Report subscribers should be very familiar with the concept. We’re invested in one of the very best health care real estate companies — one that has been growing its dividend each year for a full three decades!

I was reminded of one of the best benefits of this business model today as the speaker talked about the infrastructure that typically grows up around hospital locations. In most cities, when a hospital is set up, it will be there for decades (if not centuries). An entire community grows up around the hospital, with doctor’s offices, rehab centers and all kinds of supporting businesses settling up shop.

Once the infrastructure is there, it’s almost impossible for the operators of the hospital to move to a new location without doing serious damage to their business.

Chalk another one up for the real estate company that owns the physical hospital. They’ve essentially got a captive tenant and can be very confident that rent will be paid (even if the rental rates rise in the future).

“There’s no legal impediment to even higher debt levels,” says Jim Rickards, “if Congress wishes.” But there’s no good way out… Read More

“SPACs right now are hot,” Ray says, “and everyone wants to get into the action somehow.” Read More

Go figure: At the time of writing, the S&P 500 is only 2% off its all-time high — which was achieved only six weeks ago. Read More

Apple’s pricey new iPhone “primes consumers for the higher cost of even more advanced connectivity that could be making its way,” Ray Blanco says. Read More

A curious mainstream narrative begs the question: Is there a 2020 version of the “Froman email” floating around Wall Street and D.C.? Read More

Regardless of the election, gold’s scarcity coupled with swelling demand — and a pandemic in the background — seem like a recipe for a Midas metal rebound. Read More

Ray Blanco on the question that’s overshadowed Trump’s illness, the mainstream media and the election cycle: “Will we get a vaccine before the election?” Read More