Inside the "House of Cards" Symposium

“No one can accuse the Agora team of groupthink,” quipped Jim Rickards during a rousing roundtable yesterday at our “House of Cards” Symposium at the Four Seasons in Baltimore.
Jim was the headliner… but several other editors in the Agora Financial stable also spoke. As the day wore on, it was obvious there was a giant divide between the investing approaches of Jim Rickards and Chris Mayer.
The back-and-forth wasn’t quite as entertaining as the Yemen peace talks in Geneva yesterday, where both shoes and fists flew… 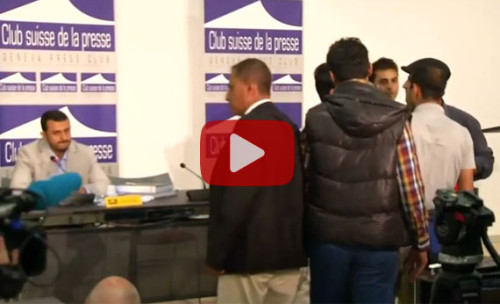 … but our event was much more enlightening.

“I can’t read [German Chancellor] Angela Merkel’s mind,” said the fund manager to Jim Rickards a while back.
Jim told our audience yesterday about a gentleman who had a long and successful career picking investments based on corporate balance sheets, earnings multiples and other “micro” data points he could readily discern. But in more recent years, he felt his investments were getting whipsawed by “macro” events outside his control, like the Greek debt debacle — which is to some extent a showdown between Greece and Germany.
He wound up shutting down his fund.
“I wish we didn’t have to think about [Federal Reserve chair] Janet Yellen,” Jim said. But he asserted we must think about the Federal Reserve if we have any hope of making secure investments for the future. “They’ve taken it upon themselves to be central planners for the world.”

“Events can be important but not predictable,” Chris countered — Fed policy being a prime example.
As you might be aware, Chris has undertaken an exhaustive study of 365 companies that have proven themselves 100-baggers since 1962. That is, they’ve multiplied every dollar invested 100-fold. His newly christened Mayer’s 100x Club has set out to find future 100-baggers — the Fed be damned.
“You have only a limited amount of time,” said Chris. “How are you going to spend it? Predicting the Fed or looking for great companies?”
I can’t convey the depth of this discussion — I can only hit the highlights. But you can do a deep dive by listening to the high-quality audio recordings of every session from yesterday… and reading the transcripts.
[Urgent notice: These recordings and transcripts are available only through midnight tonight. Order now and we’ll have them in your inbox only days from now.]

“I’ve given a lot of talks, but I’ve never done anything like this before,” Jim Rickards said as he opened his keynote speech.
Jim laid bare the entire research methodology that goes into his investment recommendations — including the IMPACT system used in Currency Wars Alert.
It’s heavy stuff — encompassing behavioral psychology… the inexact science known as inverse probability (if you lack data, you start with a hypothesis and wait for the data to roll in)… and something we’ve touched on before, complexity theory.
Like a house of cards, societies and systems have a tendency to become more complex over time. Everything becomes connected to everything else. At the outset, the added complexity delivers more benefits — that is, a higher standard of living. But eventually, it reaches a point of diminishing returns. Too many parasites glom onto the system and onto society. (Jim cited JPMorgan Chase CEO Jamie Dimon and Goldman Sachs CEO Lloyd Blankfein by name… Heh.)
Here’s Jim’s point: “Societies do not collapse because of adversity. They collapse because they lose the will to overcome adversity.” That is, it’s not a plague or a drought that did in societies over the long sweep of history. It’s the internal rot that makes it impossible to recover from the plague or drought.
Investment implications, you wonder? “It doesn’t mean we live in caves and get by on canned goods,” Jim says. The recordings and transcripts give you a full explanation… including two stock recommendations from Jim’s chief analyst, Dan Amoss. Sign up right here before midnight tonight.

“Prepare for disruptive technologies and man-made disasters,” our Byron King told the assembled audience in Baltimore.
If Jim is our man with links at the CIA, Byron’s our “in” at the Pentagon — to say nothing of his energy-industry know-how. His talk was all about de-risking a portfolio in light of two realities: 1) Politicians will screw us over. 2) You can still make money while reality No. 1 takes place.
Byron offered eight names and tickers to seize on those realities — including the new reality that American oil wells are being powered exclusively with solar electricity. (I didn’t know that either.) If you have the recordings and transcripts, you’ll have access to all eight names.

“Where others see collapse, I see opportunity,” said the aforementioned Chris Mayer during his talk about 100-baggers.
As I mentioned yesterday, Chris’ study encompasses firms that survived the 1973 oil shock, the twin recessions of the early ’80s, the dot-com bubble and the 2007-09 crisis.
Sure, there are familiar names like Wal-Mart, Microsoft, Intel and Home Depot. But Kansas City Southern, a railroad? 100-baggers can be found anywhere.
Well, almost anywhere. You won’t find them among utilities… nor will you find them among now-mature businesses like Apple. “But if you get a high return on equity,” says Chris, “the sky’s the limit.”
And here’s an interesting twist in light of Chris’ “value” orientation: He says sometimes you have to be willing to pay a higher multiple of earnings if it will deliver higher growth in the future. On the recordings, you’ll hear him name one of his recent picks — up 50% in a matter of months, but with plenty of upside still.

“The dollar store of real estate,” is how Ryan Cole from Laissez Faire’s Unconventional Wealth described a unique investment for hard times. Considering how Family Dollar Stores (FDO) is up fourfold in the last 15 years, we took notice.
Ryan’s talking about mobile homes — an ideal solution for many of the 60 million Americans who make $10 an hour or less and thus can afford at most $572 a month in rent or a mortgage. “Many more people will be in this position,” he says, “once the ‘House of Cards’ collapses.”
The way to make money from this trend is to own the lots on which people’s mobile homes sit… and collect the rent. The overhead’s low (you’re not fixing the toilets), and the tenants tend to stay (it costs at least $5,000 to move a mobile home).
And a confluence of recent events is making it especially lucrative: Act now and you can double your money in three years. You can even buy lots and put ’em in an IRA.
No idea how you’d start? Ryan tells all in the Symposium recordings and transcripts.

To the markets: Stocks are catching their breath after a big run-up yesterday.

The major indexes are little changed as we write. The S&P 500 sits at 2,118, the Nasdaq only four points off yesterday’s record close of 5,133.
Gold is holding firm just above 1,200. The only meaningful movement is in Treasuries, the yield on a 10-year note down to 2.28%.
Stocks rallied big yesterday despite talks about Greece breaking down. This morning, they’re barely moving despite news that a resolution is now near. Go figure.

Which brings us to Jim Rickards’ big prediction for the second half of 2015. It’s no surprise if you’ve been reading us in recent weeks: The euro will continue to rally from this week’s levels around $1.132.
“If you have a weaker euro, you have a stronger dollar,” Jim told the Symposium audience. “And a stronger dollar’s been killing the U.S. economy.” The nature of currency wars is that not all nations can debase their currencies at once. They have to take turns. It was the euro’s turn to weaken in recent months. Now it’s the dollar’s.
Everyone on our panel made a big call for the rest of the year too. By now we’re sure it will come as no surprise that you can hear them all on the recordings and transcripts. They’re still available through midnight tonight.

“I signed up for, and recently canceled, my Currency Wars Alert subscription,” a reader writes.
“I canceled because Agora Financial didn’t give full disclosure about the ‘back testing’ that you repeatedly described in The 5. Instead of telling readers about the losses they would have suffered using Rickards’ strategy, you only told folks about the 586%, 1,102% or 340% gains.
“A woman in your customer service department explained that of the three closed trades as of the day I’m writing, all were losers. Doesn’t your readership deserve to have the losses factored into the ‘back tested’ gains as well?
“I dare you to print this and respond in The 5 Min. Forecast!
[Ah, a longtimer who knows that trick works!]
“P.S. While I disagree with the way you’ve chosen to market Currency Wars Alert, I love The 5!!”
The 5: Jim Rickards addressed this question head-on during our Symposium yesterday.
“They don’t all pay off,” he said. “And they don’t all make money from Day 1.”
Currency Wars Alert uses long-dated options — six months, 12 months, sometimes 15 months. There’s a reason for that, he says: The IMPACT system is smoking out “fat tail” events that won’t necessarily unfold in the next five days or even five weeks. But once they do unfold, the system is designed to expose a flaw in conventional wisdom. “We want to give that flaw time to play out in our favor,” Jim said.
“Just because we’re underwater today doesn’t mean we think we did anything wrong,” he added. “Time is on our side.”
And to set the record straight, one of the closed trades was a 110% gainer in seven weeks. Dare we suggest you bailed too soon?

“I am assuming,” a reader snarks, “that there are a lot of companies that also have a ‘Jim Rickards?’
“Why else would you always say ‘our’ or ‘our own’? It sounds as if you are insecure and possessive!!”
The 5: “Not at all,” says our executive publisher, Addison Wiggin.
“We like Jim and are honored to have him on our team. He has a lot going on elsewhere, but together, we’ve created three unique approaches to the market which Jim personally oversees. You can find them here, here and here.”
Best regards,
Dave Gonigam
The 5 Min. Forecast
P.S. Last chance: Complete recordings and transcripts of yesterday’s “House of Cards” Symposium can be had only through midnight tonight. The offer comes off the table after that.

P.P.S. Once you order, it will take a few days for our team to clean up the audio from the symposium and correct any errors that come back from the transcription service — i.e., “medium” when the speaker means “median.” Happens a lot. Takes time, and we want to make it as professional as possible. We promise it’ll be worth the wait and the information will still be fresh. But for that reason, we can’t keep the offer open indefinitely. Take advantage before midnight tonight.