War By Other Means

For the first time ever, the United States and NATO are moving tanks and artillery near Russia’s border.

The elite media yawned when Defense Secretary Ashton Carter made the announcement yesterday. Evidently, a royalty dispute between Taylor Swift and Apple was more important.

Not us: For on the first business day of this year, we called the showdown over Ukraine “the wildest card of 2015.”

As we approach midyear, the showdown between the Western powers and Russia is no longer just about Ukraine.

Carter announced the heavy weaponry will be “pre-positioned” in the Baltic states, Poland, Romania and Bulgaria. A “spearhead” force of up to 40,000 troops will also be dispatched — 10 times the number currently stationed in those countries. 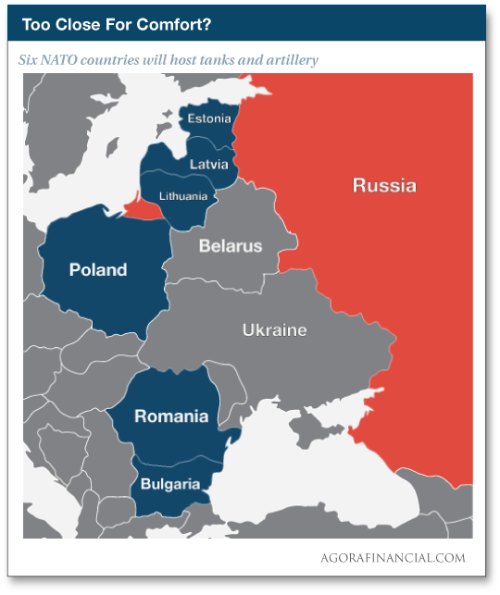 “Do these people actually want and seek a military showdown with Putin’s Russia?” asked the renowned Russia scholar Stephen F. Cohen last night during a radio interview. “If they don’t, there’s no rational explanation for what they’re doing.”

Russia is responding to the move by upgrading a missile brigade in Kaliningrad. That’s the sliver of Russian territory just north of Poland, disconnected from the rest of Russia. The brigade will be outfitted with Iskander tactical missiles capable of firing nuclear warheads.

“We are today risking a collision with Russia in the Baltic states and Ukraine,” writes Pat Buchanan in a recent column, “where no vital U.S. interest has ever existed and where our adversary enjoys military superiority.”

Alas, Professor Cohen and St. Patrick of Buchananomics are outcasts among America’s public intellectuals these days — dismissed as “Putin apologists.”

Then again, who says a Russian response need be military?

More than a year ago, your editor dined with Jim Rickards — right around the time Western sanctions against Russia were starting to put a hurt on the Russian economy. He suggested an asymmetric response by Russia — a cyberattack on the U.S. financial system.

“Attack the New York Stock Exchange or the Nasdaq,” he said, “and the impact would be… devastating.”

At the “House of Cards” Symposium Jim hosted last week here in Baltimore, he reminded us that Nasdaq still hasn’t come clean about the cause of a “glitch” that shut down trading for more than three hours the afternoon of Aug. 22, 2013. Will it ever?

Which brings us to the latest financial war game at the Pentagon — in which Jim Rickards once again was a key player.

Jim took part in the first one the Pentagon arranged in early 2009 and wrote about it in his book Currency Wars. During that exercise, the Russians and Chinese teamed up on a new gold-backed currency that muscled aside the U.S. dollar as the globe’s main reserve currency.

“Six years later,” Jim reminds us, “those threats have arrived in the form of Russian and Chinese gold purchases, the launch by China of the Asian Infrastructure Investment Bank, the BRICS contingency reserve fund and other initiatives designed to diminish and eventually eliminate the dollar from large parts of global commerce and banking.”

A potent backdrop indeed for the latest war game, held on Friday, May 8… 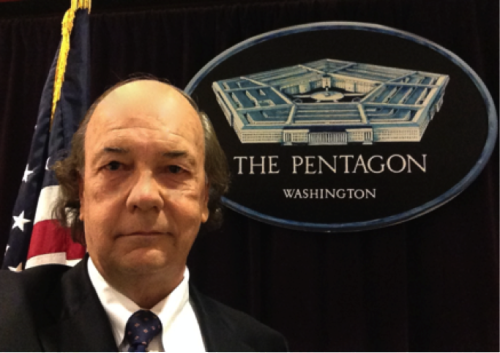 Jim Rickards, capturing a selfie before the war game got underway…

“Our scenario this time,” he explains, “was limited to a confrontation between China and the U.S. involving disputed jurisdiction in the South China Sea.”

We tipped you off to this flashpoint three weeks ago. China insists it controls a large swath of the South China Sea, with rich fishing grounds and as much as $5 trillion in oil and gas. But parts of the region are also claimed by Vietnam, Malaysia, Taiwan, Brunei and the Philippines. 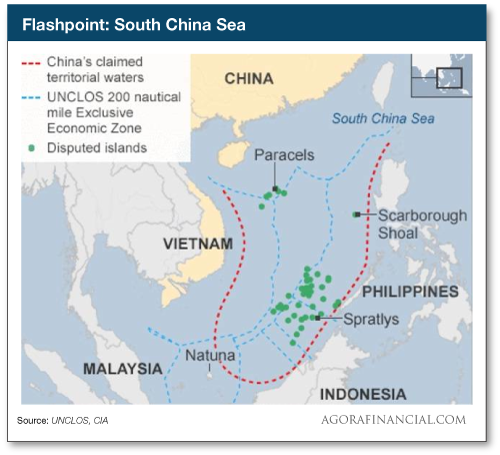 “The U.S. has treaty obligations to the Philippines and Taiwan,” Jim elaborates, “which could result in the U.S. becoming engaged militarily in the event of a dispute with China. This volatile mix of disputed claims, natural resources and complex treaty networks has the ingredients needed to escalate into a Third World War.

“All it would take to start a war is some spark such as a collision at sea or an attack based on mistaken identity or misunderstood intentions. A war there is probably just a matter of time.”

But as with the previous exercise, the focus was on means of waging war that didn’t involve aircraft carriers, submarines or missiles.

“One of the main topics of discussion,” Jim tells us, “was the use of sanctions involving access to the Society for Worldwide Interbank Financial Telecommunication, known as SWIFT.”

If your nation has no access to this global payments network, your economy is toast. And it’s the U.S. and other Western powers who call the shots. Iran was cut off from SWIFT in 2012. Hyperinflation and bank runs followed in short order.

Jim goes on: “We asked what would happen if the roles were reversed? Instead of the U.S. banning its enemies from SWIFT, what if China tried to ‘de-SWIFT’ Taiwan or the Philippines? What if financial weapons developed by the U.S. were adopted by China and turned against the U.S. and its allies?

“I learned two lessons on May 8 that we are fortunate to be able to share with you,” Jim says.

“The first is that when nations engage in financial warfare, individual investors can be collateral damage. If China tries to attack the U.S. by closing the New York Stock Exchange, it will be tens of millions of Americans who will suffer an immediate loss of wealth as prices plunge and accounts are locked down or frozen.

“The second lesson is that the financial war will be fought in cyberspace using digital technology applied to payments systems such as SWIFT, Fedwire, MasterCard, Visa and Europe’s Target2 system.

“The answer to both threats — collateral damage and digital warfare — is to have some hard assets in physical form that cannot be attacked digitally. Such assets include physical gold and silver, land, buildings, fine art and rare stamps. These are the things that cannot be erased in a digital attack or frozen when payments systems are disrupted.”

[Ed. note: We understand a few of our readers still haven’t seen a copy of Jim Rickards’ third book — available only through Agora Financial. It’s packed with practical investment guidance drawn from his first two books.

Don’t worry: You don’t have to read the first two books to find value in his latest. And if you have a U.S. address, we’ll send you a copy for only the cost of shipping and handling. Here’s where to act.]

The only economic number of note is the Commerce Department’s third and final guess at first-quarter GDP. It registers an annualized drop of 0.2%.

“One of the most valuable private companies in Silicon Valley,” says this morning’s Financial Times of an outfit called Palantir Technologies.

Palantir is one of the more — umm — interesting tech startups of the 21st century. One of its chief backers is the CIA. It’s a leader in “big data.” It started out in 2004 serving government agencies. Now it sells anti-fraud and other software to industries as far-flung as banking, the media and pharmaceuticals.

Now comes word it’s raising funds at a $20 billion valuation… which means it’s doubled its worth in a year and a half.

“Palantir is one of a new generation of highly valued startups in Silicon Valley that are remaining private for longer,” says the FT. In 2013, CEO Alex Karp said going public would make running the firm “very difficult.”

But there’s still a way you can invest in Palantir… along with several other powerful tech startups. It could mean tripling your money in the next six months… as you’ll see at this link.

If social media are to be believed, ISIS will debut its gold currency in about three more weeks.

The 5 first tipped you off to ISIS’ plans last November. Now its supporters are showing pictures of a 1-dinar gold coin with wheat on it and a 5-dinar coin with a world map. Not dissimilar from the first pictures that surfaced last year. 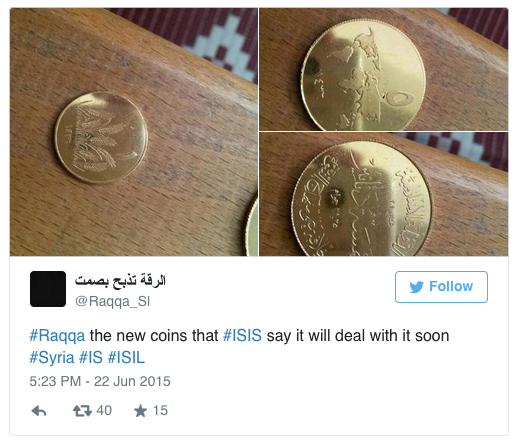 We still don’t know where the gold will come from to back this currency, although we’ve seen suggestions there was some gold to be had when ISIS captured the Iraqi central bank’s offices in Mosul last year.

In any event, we’re told the currency’s debut is set to coincide with the end of Ramadan on July 17. If it really does come about, we reiterate the warning we shared last year: “What better way for Western authorities to discredit gold. ‘Terrorist coinage!'”

“Dave, suggest you Google ‘Jade Helm’ and go to Wikipedia’s explanation,” writes a reader from Texas weighing in on our Texas gold-and-secession thread.

The 5: We’re well aware of it, good sir. Not least because colleague Chris Campbell has done a two-part expose this week at Laissez Faire Today, here and here. Highly recommended.

“We are free marketeers,” our correspondent today continues, “so the free market is the way to go. It’s important. Thanks for posting Richman’s viewpoint.”

“Upon further reflection,” writes another, “I think the best substitute for ‘crony capitalism’ is ‘parasitic cronyism.’ Parasites feed off the living, and these people are feeding off of the taxpayers, consumers and other producers.”

“No mention of the Raisin Administrative Committee? That wild pig of a bureaucracy has ravaged California raisin growers for too long now. It cannot sink back into anonymity until its funding is tapered to zero.”

The 5: Heh. That would have been a fine inclusion, seeing as it also figured into yesterday’s episode of The 5. For that matter, the entire Agriculture Department.

Another reader wrote in with a brief emendation about the Supreme Court raisin ruling, saying the justices ruled 8-1. OK, we’ll go along with that. The five Republican appointees formed a majority. Three of the Democrats concurred, but they felt the plaintiffs were not entitled to compensation. Only Justice Sonia Sotomayor sided with the feds across the board.

P.S. Last week, we sent you an email with the subject line, “‘I bet this gets taken down immediately…'”

It was about a video that had disappeared from the Internet… only to later resurface.

Writes a reader, “The reason it was taken down? It’s an assault on everyone’s intelligence!”

Ouch. We leave it to you, dear reader, to decide that one.

But do check it out now, because it might disappear again.