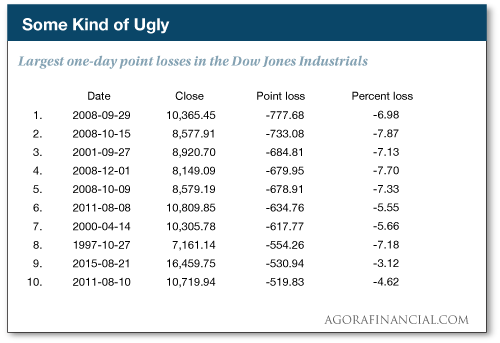 On that ugly day in 2008, the explanation was obvious — the Panic of 2008 was in full swing, and Congress had voted down the first attempt at a bank bailout.

Now? It’s not so obvious.
China? Yes, China’s in trouble. The Shanghai Composite closed down another 8.5% today — wiping out all of 2015’s gains. But as we pointed out a few weeks ago, that’s to be expected when governments make boneheaded moves like banning short-selling — as the U.S. government did in 2008.
The Fed? On an 800-mile drive back to Baltimore yesterday, your editor heard a financial podcast host proffer that explanation for the steep losses starting Wednesday afternoon — when the minutes from the Federal Reserve’s July meeting were released.
It’s true, short-term Treasury rates instantly tumbled. A lot of leveraged Wall Street high-rollers who were betting on rising rates got caught with their pants down. They had to sell whatever they could to quickly raise cash… which meant dumping stocks.
But for the life of us, we can’t figure out why someone who still thought the Fed would raise rates in September suddenly decided after reading the minutes on Wednesday that a rate increase was now off.
In any event, we’re now an hour into the trading day and the Dow is down “only” 650…

Here’s a much simpler explanation: We’re way overdue for a pullback. If it’s not China or the Fed, it would be something else the pundit class would point to.
On average, the major U.S. indexes experience a “correction” — meaning a drop of at least 10% — every 20 months. But the last such drop occurred four years ago.
The catalyst then was Standard & Poor’s downgrading U.S. Treasury debt from the pristine AAA rating it had held for as long as S&P had been rating bonds. It happened on a Friday afternoon in August after the market closed. Monday brought a 635-point drop, good for No. 6 on the table above.
The market continued to tumble as summer turned to fall — bottoming in October. Since then, it had been a steady climb upward… until last week. Note the red line on this chart from Jonas Elmerraji of our trading desk. 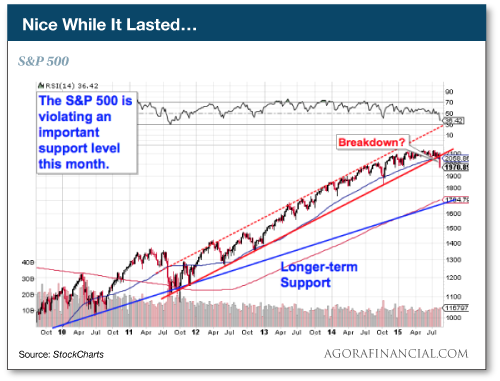 On the other hand, there’s that blue line. You don’t see it on this chart, but it goes back to the worst of the financial crisis in late 2008/early 2009. The S&P 500 could plummet to roughly 1,700 and the longer-term uptrend would still be in place.
As we check our screens again, the S&P sits at 1,925 — almost but not quite in correction territory, down 9.7% from its record close on May 21.

“Will Yellen wake up before global markets melt down entirely? Probably,” suggests our Jim Rickards.
As Jim has explained in recent weeks, Fed chair Janet Yellen has run her mouth all year about raising the fed funds rate… but the economic data that, to her mind, would justify a rate increase still haven’t materialized. Unemployment isn’t yet down to 5%. GDP is anemic. Official inflation is nowhere near 2%.
“Where do we go from here?” Jim asks rhetorically. “The best case is that Yellen realizes her blunder, backs away from rate hike talk and initiates some easing measures. These could include more QE, negative interest rates, a cheaper dollar (more currency wars!) or helicopter money.”
Understand those measures would not restore the economy to health… but they’d stave off collapse awhile longer…

“It’s likely we’ll see some serious economic head winds in China that could last for years, not just a few quarters,” says our Rick Pearson — who knows China well from his years as an investment banker in Hong Kong.
“Beijing’s recent decision to devalue its currency could mean the government has some behind-the-scenes details about macro weakness,” he says.
But that should come as little surprise. “China has been posting scorching economic growth for the past 20 years. But it’s not something that can continue indefinitely. Its economy is starting to mature, and China needs to figure out how to adjust. Truth be told, it could be a painful process.”
That said, Rick’s encouraging his readers to hold onto two consumer-oriented Chinese names that trade in the U.S. Chinese stocks that trade in New York and Hong Kong are less volatile than the so-called “A shares” that trade in Shanghai.
By the way, the Shanghai Composite remains 45% higher than it was a year ago at this time.

What about other asset classes today, you ask? Hot money continues to flow into Treasuries, sending prices up and yields down. The 10-year yield has dipped below 2% for the first time in nearly four months.
The greenback continues to fall against other major currencies. At last check, the dollar index is 93.3 — a seven-month low.
But the dollar’s continued tumble today isn’t helping gold; the bid is $1,161, about where it was on Friday. Still, that’s up 7% from the lows of a month ago.
Crude? Down more than 4% as we write, to a new post-Panic of 2008 low of $38.75 a barrel. Same story with copper, presently $2.24 a pound.

Maybe this will make you feel better: One of the most reliable U.S. recession indicators isn’t flashing red at all.
The Chicago Fed National Activity Index crunches 85 economic indicators. On this chart, zero indicates the average level of economic activity going back nearly 50 years. More relevant today, perhaps, is that a reading of minus 0.7 has preceded nearly every recession going back to 1970. (It was late calling the oil-shock recession of 1973-75.) 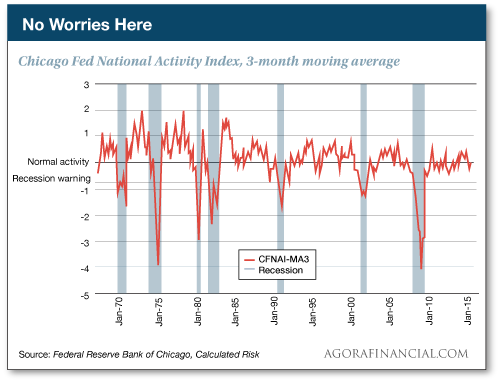 The three-month average clocked in today at zero on the nose.

As we continue to write, the Dow has cut its 1,000-point loss to a mere 250… but retail investors are running into “glitches.”
Twitter has exploded with complaints from customers of TD Ameritrade and Scottrade who say they can’t access their online brokerage accounts or can’t complete trades.
Scottrade tells USA Today its website was “slow” during the frenzy in the first hour of trading. TD Ameritrade says it’s working to resolve its problems, and customers are encouraged to complete their trades over the phone.
Assuming they can get through…

Hey, now the Dow has pared its loss to a mere 156 points… so at this time, we’re compelled to point out the headline noise about the markets today is masking some worrisome geopolitical trends.
Let us quickly hopscotch the globe…

At least the North and South Koreans have come to an agreement defusing the “quasi-state of war” mentioned here on Friday.

“You might want to inform your readers that World War I and World War II followed the collapse of the international monetary system in 1914 and 1939,” a reader writes — invoking familiar Jim Rickards themes. “Vietnam was going on in 1971.
“That’s three wars during the collapse of the international monetary system. I guess Jesus was right when he said that ‘you shall hear of wars and rumor of wars, but be not dismayed, for these things must first come to pass.’”
The 5: Yes. Wars are an outstanding way for politicians to divert the people’s attention from their economic troubles.

“Regarding teachers, like voters, some will be conservative and some liberal,” writes a reader harking back to a topic from last week.
“The problem is not the politics of the teachers — the problem is the politicians and the politician-oriented school administrators.
“The 2013 gross domestic product of the nation of Costa Rica was equivalent to $49.62 billion. The 2013 education budget for the state of California alone was $70.026 billion. The functional literacy rate in California is estimated at between 62-84%. The functional literacy rate in Costa Rica is 92%. Even with the population difference, the difference in per capita funding is substantial.
“Something rotten somewhere? You figure it out — well, maybe 62% of you can at least try. Assuming that many of these geniuses are voters, no wonder we are where we are.”

“Dow theory, if correctly interpreted from the writings of Hamilton and Rhea, would give a signal of a major bear market when BOTH the Dow transports and Dow industrial averages close below a ‘major low’ from a bull market,” writes a reader weighing in from Friday’s episode.
“A Dow theory major bear primary movement would be in effect when both the Dow transports and industrials CLOSE below the 2014 October low closes of the respective averages. Other signals only indicate secondary (and confusing) movements in the markets which may reverse or follow a line. The Dow theory is not infallible. (The Dow Theory by Robert Rhea.)
“Thanks for doing a great job daily! Hope Dave is OK. Miss his byline. (Brian is doing great.)”
The 5: No it’s not infallible, but Dow theory still has its place.
Part of the problem is that the composition of the two indexes has strayed far from Charles Dow’s conception in the late 19th century. Back then, the industrials were a measure of factory output… and the transports (railroads) were a measure of demand for factory goods.
Nowadays, the Dow Jones “industrial” average includes the likes of Visa, Goldman Sachs and UnitedHealth Group — outfits that don’t produce anything and indeed serve to extract wealth from the productive classes. And the transports include three of the four major passenger airlines.
Seen in that light, it’s a wonder Dow theory still has any predictive value at all…
Best regards,
Dave Gonigam
The 5 Min. Forecast
P.S. A heartfelt thanks to colleague Brian Maher for standing in last week, affording your editor the chance to pay a call on family far from Baltimore. Fair warning: He’ll be back on Wednesday when I face jury duty. No rest for the wicked…
P.P.S. As we get closer to pressing the “send” button, the Dow’s losses have grown again, to 240 points.
But did you know it’s possible to collect a minimum $1,000 a month no matter what the market does?
In fact, the more violent the ups and downs, the more profitable this strategy can be.
No matter what the market does, this is the easiest way we know for you to make an extra $1,000 per month — bare minimum.
In fact, we’re so confident you can make — at least — $1,000 per month if you follow the strategy outlined on this page… that our publisher guarantees it.
Yes! We’re guaranteeing you will be shown how to make a minimum of $1,000 a month using this strategy.
But only if you hurry. This video comes offline Thursday night at midnight.
If you’re at all ainterested, you need to click here to see how to make a minimum of $1,000 per month — guaranteed.