Assuming the blood moon doesn’t touch off the Apocalypse Sunday night, the federal government will experience another “partial shutdown” starting next Thursday.
Presumably, it will look a lot like the one two years ago. You remember that, right?
You don’t? You mean the impact on your life was that minimal?
Well, the bureaucrats are doing their best to scare you regardless. During a congressional hearing yesterday, NSA chief Adm. Michael Rogers was asked whether a shutdown would “compromise national security.”
Betcha can’t guess the answer!
Rogers’ argument was novel. He said all this shutdown talk is bad for morale; as it is, NSA employees “could easily get jobs on the outside and earn significantly more amounts of money.”
That’s the worst threat he can conjure from a shutdown? That NSA workers might have to get a real job in the private sector instead of eavesdropping on U.S. troops overseas having phone sex with their wives back home? (That really happened, by the way.)
Bring on the shutdown!

While we’re on the subject of idle threats, let’s talk about the Federal Reserve.
Janet Yellen opened her yap last night, saying most of her fellow members of the Fed’s Open Market Committee still expect to raise the fed funds rate before year-end… even though they passed up the chance last week.
Our friend Chuck Butler at EverBank Global Markets picks up the story: “In a 40-page speech at the U. of Massachusetts in Amherst, she quoted 40 academics, had 34 footnotes, nine graphs and an appendix to back her argument that she believes that, as summarized by The New York Times, the ‘slack in the economy has diminished to a point where inflation pressures should start to gradually build in the coming years.’ And that she sees no reason why the central bank shouldn’t begin raising short-term interest rates this year.
“OK, I don’t mean to be sarcastic, glib or a smart aleck here, but why would you say that inflation should start to ‘gradually build in the coming years’ when you’re trying to make a point about raising interest rates now? Isn’t the object of raising interest rates to cool down an economy and combat inflation? Remember Paul Volcker? Remember his ‘Saturday Night Special’? I do. And I know why he drove interest rates so high, to beat down inflation!”

Imagine for a moment Janet Yellen holding a gun to a hostage for the last nine months.
Over and over, she says, “We’re gonna raise rates! We mean it — you just watch! We swear, we’re gonna do it! Any day now, we’re pulling the trigger!”
Even she’s getting tired of the act. Toward the end of her talk last night, she started getting woozy. Medics on the scene checked her out. A bit of dehydration, a Fed spokesman said.
Or would it be exhaustion keeping up the pretense of “hawkishness”?

“At this point, the global slowdown is so pronounced that the Fed’s next move is more likely to be in the direction of ease rather than tightening,” says Jim Rickards.
“Many analysts assume that ease is impossible when interest rates are already at zero. Still, the Fed has at least five policy tools it can use to ease monetary conditions.”
They are…

“This does nothing for global growth,” says Jim of the last option, “but it could help U.S. growth in the short run. Since the U.S. is the world’s largest economy, stronger U.S. growth is certainly more desirable than a U.S. recession.”
A recession? Who said anything about a recession?

“Thursday’s durable goods report for August brought more evidence that the U.S. economy is stumbling toward recession,” writes David Stockman, “and that the Fed’s massive money printing campaign has been an abysmal failure.”
The “durables” number tracks the sale of items designed to last three years or more — everything from washing machines to jet engines. The headline number is crazy-volatile, so you have to read the details carefully — as Mr. Stockman, the former White House budget director, is wont to do.
Here’s the key detail: “Shipments of so-called core cap ex (nondefense capital goods less aircraft) were down 2.5% from prior year, confirming that last summer’s spurt of shipments is rolling over on pace with the even larger 5.7% drop in orders.” 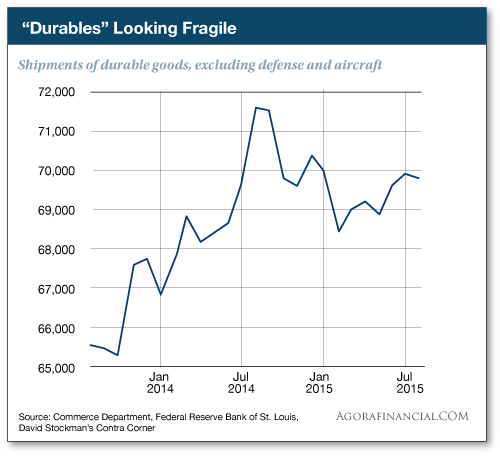 So much for Wall Street’s cheery narrative all year, Mr. Stockman goes on. “They had been insisting for months now that there was nothing wrong with the U.S. economy except some cold and snow last winter, and that with the arrival of flip-flops and shorts the growth genie would finally come leaping out of the bottle.
“That acceleration, in turn, would be accompanied by surging business cap ex because an economy bounding toward full employment will need more investment in machinery and equipment.
“The funny thing is that these same Wall Street shills have not changed their tune, even as the data has once again foiled their endless hopium about the purported economic recovery and unseemly cheerleading for higher stock prices. As we have pointed out repeatedly, Wall Street gets away with this tommyrot in part because the mainstream financial press is just plain lazy, and possibly stupid, too.”
Heh — don’t hold back, David.
In case you missed the announcement earlier this month, we’re about to launch a new venture with Mr. Stockman. Details to follow…

“Stocks Rally After Yellen Clears up Confusion Over Rates,” says a headline at The Street — channeling the mainstream treatment of both the Yellen speech and this morning’s market action.
Whatever. At last check, the Dow is up 200 points, approaching 16,400 — making up all of yesterday’s losses and then some.
The S&P 500 is up more than three quarters of a percent, at 1,947. Year to date, the S&P is down 5.4%.

“That drop in the S&P may not sound particularly awful,” says Jonas Elmerraji of our trading desk, “until you take a look at the individual stocks.
“As I write, about 1,635 individual U.S. stocks are within 10% of their 52-week lows right now. That’s a pretty staggering statistic. And many of those underperformers look likely to keep on collapsing as we head into the final stretch of 2015. Many, but not all.”

The big economic number of the morning is the Commerce Department’s third and final guess at second-quarter GDP — up an annualized 3.9%.
If you’ve been reading us for a while, you know we hold contempt for GDP as a measure of anything relevant. But Fed governors and Wall Street traders think it’s Very Important and so we ignore it at your peril. For the moment, the number reaffirms the impression of a “recovery” that’s gathering pace and reinforces the notion of a rate increase before year-end. Buy!

Gold is losing some of the ground it gained yesterday — down about $8 as we write at $1,146.
Once again, palladium is the standout performer among the precious metals — indeed, the only one in the green today. At $662 an ounce, it’s jumped 8.5% since Tuesday.

“Your readers have it all wrong,” reads our first entry in today’s mailbag.“ The velocity of money is very high in Washington, D.C., but not so much in the rest of America.”
“Velocity, velocity everywhere,” another reader writes, “BUT we should be emphasizing (rather
than not mentioning) the velocity necessary to get rid of 536 jobholders in Washington, D.C.
“Their replacements should be better because it can’t get any worse… OOOPS, I said that when ‘Baby’ Bush was in office…
“Oh, well, as you pointed out, the sheeple won’t let it happen anyway.”
The 5: Well, House Speaker John Boehner said this morning he’s quitting both the speakership and his House seat effective the end of next month.
As one wag on Twitter said, “So where’s Boehner going, Barclays or Citadel?”

“I love your daily letter, and I’d like to say that I don’t object to the d-bag reference Tuesday — there couldn’t have been a better recipient for the term — BUT to be a true 5 Min. reader, I must complain about something… so here it is: You’ve stopped calling the statisticians at the Bureau of Labor Statistics ‘wonks.’
“Over the years, thanks to your repeated use of the term, I’ve conjured up this image of the BLS housed in an office that looks something like the Leaning Tower of Pisa, full of wacky folks wearing purple suits, funny top hats and all sorts of elaborate garb.
“When you refer to them as simply ‘the BLS,’ it takes the fun out of the remainder of the issue, which turns my usual 5 Min. read into at least seven-eight minutes (which is also something to complain about — but I won’t get started on that one).
“Here are a few stats I put together (maybe I could apply at the BLS?): Of the 1,592 issues of The 5, I’ve received, there’ve been 177 issues with the word ‘wonk,’ 97 ‘idiots,’ 20 ‘goofs,’ five ‘FUBARs,’ three ‘douches’ and zero ‘cattywampuses’ (but I’ll continue to keep my eyes open).
“This led me to export all 1,592 issues to a file, process out all the HTML tags, exclude some stop words and generate these word clouds (which, sadly, don’t show ‘wonk’):
“First, the top 100 words… 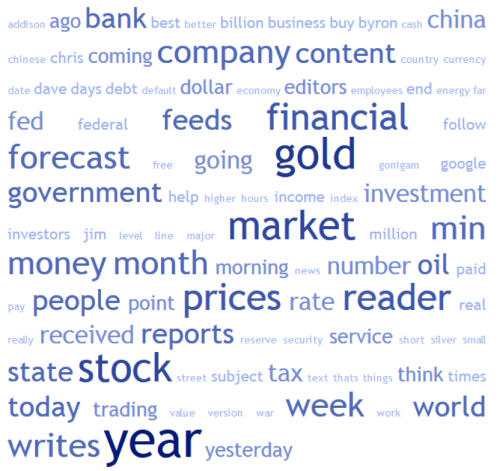 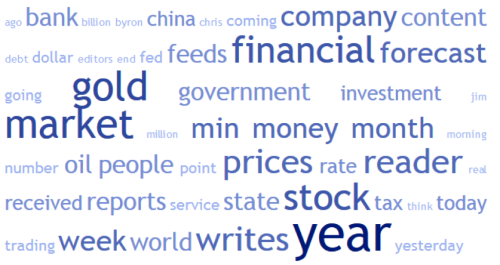 “If you are interested in the raw data and parsing I had to do, let me know and I’ll send it over. The biggest hurdle was getting the raw 60MB file down to 5MB, so that the online word cloud websites would parse the file (as they all seem to have a 5MB limit) — so I ended up stripping out everything from the file except the top 150 words.
“I think my next inspiration is to write up a list of derogatory terms and plot their frequency over time on a graph alongside the S&P or a recession indicator — surely, there’s a correlation.”
The 5: Uh… wow.
Surely, our recommendations must have helped make you independently wealthy… ’cause otherwise, we have no idea how you’d find the time to do what you did!
Have a good weekend,
Dave Gonigam
The 5 Min. Forecast
P.S. Fed up with the Federal Reserve keeping interest rates at next to nothing for seven years? Well, now you can forget that pointless 0.04% interest rate on your savings account.
A shocking financial investigation reveals a bank “hack” that can net you interest of up to a whopping 28.99% on a new alternative to the traditional savings account. You just have to open an account at a little-known website to get started… Click here now to learn more.