Heh… National Preparedness Month is almost over.
The Earth is still spinning. The U.S. stock market, while down 11% from its springtime highs, hasn’t crashed. We’ve made it past the Shemitah and the blood moon.
We do have one day remaining in the current Puetz window — a period surrounding lunar eclipses when epic crashes tend to have clustered since the 17th century, and the phenomenon appears to be more than chance.
Enter MarketWatch this morning — informing us that today, Sept. 30, is “historically the worst day of the year for stock market investors.”
Except it’s not. Reading deeper into the story, it’s only the fifth worst… and only in the sense that the S&P 500 has ended the day in the red 62% of the time since 1945.
We’ll file this one under the category “amusing but useless statistics.” Or maybe “Five Shocking Ways Mainstream Financial Websites Waste Your Time With Clickbait.”

Of course, that’s not to say there aren’t looming threats — financial and otherwise.

The end of National Preparedness Month comes as Hurricane Joaquin looms in the Atlantic. It’s still early, but according to a private forecasting group based near Agora Financial HQ in Baltimore, “the mid-Atlantic region faces a scenario which could equal or exceed the impacts of Isabel in 2003, Irene in 2011, Sandy [in 2012] and Hazel in 1954.”
We’ll hope for the best… but in the event of the worst, we’re confident the elite media will make fools of themselves as they did with Sandy.

Meanwhile, the $14 trillion tsunami of junk bonds that Jim Rickards warned us about starting in January might be even bigger than he first suggested.
As a reminder, he came up with the $14 trillion tally like so…

This $14 trillion debt pile “cannot possibly be repaid or rolled over under current economic conditions,” Jim said in this space on Jan. 14.
“If default rates are only 10% — a conservative assumption — this corporate debt fiasco will be six times larger than the subprime losses in 2007.”
Jim said the peak of the defaults wouldn’t come till next year. Well, next year is only three months away…

Now comes Bank of America/Merrill Lynch warning about junk bonds as a “slow-moving train wreck that seems to be accelerating.”
We’re still trying to wrap our mind around the metaphor — doesn’t that defy the laws of physics? — but the report’s essential point is clear enough. The first signs of weakness among junk-rated U.S. companies showed up 18 months ago in the coal sector. Then it slowly spread to the rest of the commodity complex. Now it’s showing up in retail, food, semiconductors, telecom…
“The weakness in high-yield credit is to us not just a commodity story,” the report says; “it is about highly indebted borrowers struggling to grow, an investor base that cannot digest more risk, a market that has usually struggled with liquidity and an economy that refuses to rise above mediocrity.”
That means lower earnings for junk-rated companies… and less ability to service their debts. 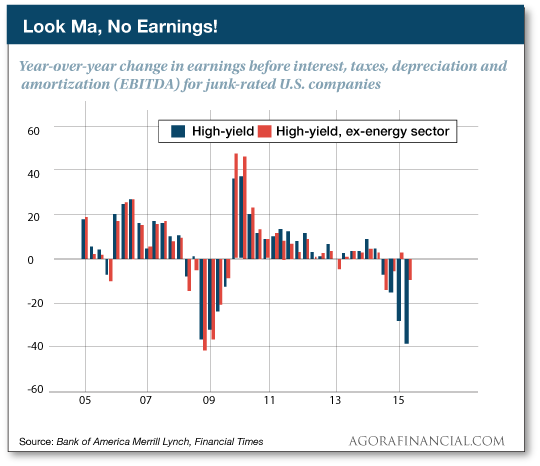 Standard & Poor’s is also joining the party — warning “the current crop of U.S. speculative-grade issuers appears weak to us and particularly susceptible to any sudden or unanticipated shocks.”
S&P says more companies have already defaulted this year than at any time since 2009 — 47 filings in all, RadioShack the most recognizable name. And the report says come June of next year, the default rate will likely be double that of two years earlier.
So how much debt are we talking about in addition to the original $14 trillion?
That’s not easy to quantify. But S&P reminds us companies with junk-rated debt have issued $2.5 trillion in bonds in recent years. About $1.5 trillion is due to mature within the next five years. Some of that debt is in the energy sector… but not all.
So why now? Even the Financial Times recognizes the Federal Reserve shoulders some of the blame: “Years of easy monetary policy that kept borrowing costs low, a wave of mergers and acquisitions and the specter of shareholder activism have all contributed to an erosion of balance sheet quality.”

Also sounding a warning is Carl Icahn — the billionaire investor who first made his name as a “corporate raider” in the ’80s.
Only he doesn’t have to use the polite and measured language of Merrill Lynch and S&P. He told Reuters this week, “God knows where this is going. It’s very dangerous and could be disastrous.
“Those guys who run these companies are borrowing money very cheaply, leveraging up their companies, using it to do two things… They are going in and they are buying back stock or, even worse, making stupid takeovers.”
Among the most eager buyers of these bonds are the exchange-traded funds (ETFs) that specialize in junk bonds — think HYG and JNK. Icahn says retail investors overestimate how easy it’ll be to unload those ETFs in a crisis.
We warned you about liquidity in these ETFs back in June: Hedge fund manager Erik Townsend related to us how he was having trouble short selling those ETFs; his broker closed out his positions because there weren’t enough shares available to borrow.
God help anyone who owns those ETFs now, says Icahn: “It’s like a movie theater and somebody yells, ‘Fire!’ There is only one little exit door,” he said. “The exit door is fine when things are OK, but when they yell, ‘Fire!’ they can’t get through the exit door … and there’s nobody to buy those junk bonds.”
[Ed. note: The resulting financial avalanche will not be a rerun of 2008. It will be worse says Jim Rickards — because this time the Fed doesn’t have the resources to bail out Wall Street’s bad bets.
We encourage you to examine Jim’s evidence — and follow his guidance to help you prepare for the day — by following this link.]

And now another facet of what the inimitable Doug Casey says should be the real name of the Securities and Exchange Commission — the “Swindlers Encouragement Commission.”
Last week, someone filed documents at the SEC claiming Warren Buffett’s Berkshire Hathaway had bought new stakes in Kraft Heinz and Phillips 66.
Just one problem: Buffett told The Wall Street Journal he’d done no such thing. The filings were fake. He does indeed own stakes in those two companies, but he didn’t add to them last week.
“The filings said the new investments were jointly owned by Berkshire and a company called LMZ,” Fortune tells us. “The SEC forms appear to have been submitted by someone named Loreto M. Zamora, who listed a Philippines address in the filings.”
Turns out making an SEC filing, legit or otherwise, is beyond easy: All you need is an address and a letter signed by a notary.
There was no meaningful movement in the shares of Berkshire, Kraft or Phillips as a result. Not so much last spring with another bogus filing, which said a firm called PTG Capital had offered to buy Avon. Avon shares popped 20% before the truth set in.
At the time, the SEC swore off responsibility, saying its EDGAR filing system is a “repository for what is filed, not what is accurate.”
It’s caveat investor when it comes to phony SEC filings. You can always check a company’s website for news releases confirming the filing. Of course, if the company is recommended by one of our editors, they’ll stay on top of matters for you.

“I am a newby at this, and I am confused,” writes an investing novice.
“It seems that [one of our competitors] states to leave the market alone, and then others say the opposite — or at least that was my interpretation. Since I’m new at this, I can be wrong at even the easiest or simplest of interpretations, so excuse my lack of knowledge.
“I heard that [another competitor] is recommending to buy.
“What is a novice like me to do?
“I need to start from scratch, and there’s so much to read. I feel stuck and can’t advance due to the enormous task at hand. I have never traded, so I wouldn’t know where to start, how to interpret tables, how to set up tables, how to decide which graph is the better one for this or that.
“Help! Soon!”
The 5: Hmmm… We advise you to read an episode of The 5 from late last year — where we take on the question of “conflicting advice” from within our own little firm, never mind the competition.
Before you invest your hard-earned money, you need to perform a bit of introspection: Which of the many messages you’re bombarded with truly resonate with you? If you’ve bought a newsletter, or several, what was it about the editor’s worldview that struck a chord?
Sit down and think about that… because you can’t act with conviction until you answer those questions.

“I noticed this a month or so back and must bring it up,” a reader writes. “ The hemlines on dresses have dropped significantly. So is the hemline theory passe or still in vogue?”
The 5: Ah, the hemline indicator — miniskirts during prosperous times, more modest attire during lean times.
By one account, it was first posited by economist George Taylor during the Roaring ’20s. By another, it was the brainchild of Paul Macrae Montgomery, who also bequeathed the “magazine cover indicator” to the world. He died about a year ago, age 72.
We don’t know who came up with it first… but we haven’t heard anyone debunk it either.
That said, is anyone else noticing hemlines coming down?
Best regards,
Dave Gonigam
The 5 Min. Forecast
P.S. Oh, no: As we go to virtual press, we’re performing one last check of headlines and we see New York Fed chief Bill Dudley has just denied everything we warned you about in today’s 5. A meltdown on the junk bond market? Can’t happen. The Fed and the government fixed it, dontcha know.
From a Reuters dispatch: “A top Federal Reserve official on Wednesday largely dismissed concerns that bond market liquidity has sharply diminished following U.S. regulatory reforms.”
Or in Dudley’s words: “The evidence to date that liquidity has diminished markedly is, at best, mixed.”
If the Fed is blind to this glaring market threat, what happens when it all hits the fan and it suddenly dawns on everyone the Fed is incapable of carrying out a 2008-style “rescue”… because the Fed is broke?
And yes, the Fed is broke. Jim Rickards calls it “the biggest accounting hoax since Enron”… and he blows it wide open right here.