Maybe Janet Yellen should go on strike.
It’s been a heavy week here in The 5 — from the aftermath of Paris to some persistently sour economic numbers.
On Fridays, we strive for a lighter tone going into the weekend… and the BBC obliged us first thing this morning: “Most of the Reserve Bank of India’s (RBI) 17,000 employees went on strike on Thursday in what the central bank described as ‘mass casual leave.’”
Evidently, the workers want better pension benefits.
Remarkably, life in India did not grind to a halt yesterday.

Meanwhile, we see Congress is looking to raid some of the Federal Reserve’s accounts to fund the next highway bill. Naturally, the Fed objects — issuing a statement conveying “strong concerns about using the resources of the Federal Reserve to finance fiscal spending.”
You don’t like it, Janet? Go out on strike. You too, Stanley Fischer. And Bill “edible iPad” Dudley. The whole sorry bunch of you. Let’s see how well the world gets along without you.
Of course, you know they won’t do it. Because they know they wouldn’t be missed.
Oh, well, your editor can dream…

Who says an act of terrorism is bad for the markets?
The major U.S. indexes are powering up again today. The S&P 500 is up two-thirds of a percent as we write, at 2,094. That’s a 3.5% improvement for the week after the Paris attacks. It’s now only 1.7% below the all-time high it notched six months ago today.

Heck, France’s CAC 40 index registered a minor dip on Monday and by the close today was up 2.1% on the week.
Gold has surrendered a bit of yesterday’s gain, the bid $1,078 at last check. Crude still hovers just above $40.

Hmmm… Goldman Sachs plans to nearly quadruple its stake in renewable energy companies over the next 10 years.
Right now the vampire squid has about $40 billion invested in the sector. It plans to up that figure to $150 billion by 2025. Presumably, solar will get the bulk of the capital… although wind and hydro will surely get a share, too.
It’s been a rough year for the solar stocks. The Guggenheim Solar ETF (TAN) has been cut nearly in half since last April… 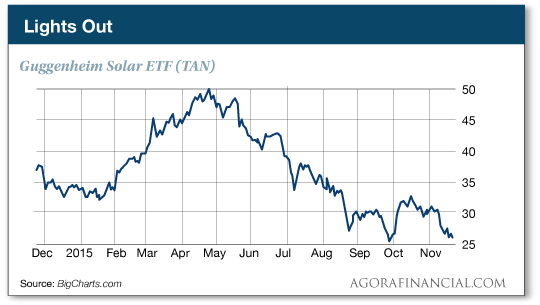 “The solar energy market is actually a great place for us to generate income!” enthuses our income specialist Zach Scheidt.
And that’s true even though none of the major solar players pays a dividend. Ten days ago, Zach’s readers pocketed a quick $250 applying his “retirement loophole” strategy.
“There are three major challenges,” says Zach, “that have caused the ‘perfect storm’ for traditional solar energy investors.
“New technology has made it cheaper to create solar panels. And because solar energy is a competitive business, manufacturers have sold solar panels at cheaper and cheaper prices.”
Then there’s the low price of natural gas. “Less demand for solar power from utility companies has also helped to keep solar panel prices lower,” Zach explains.
Too, there are the worries over China: “The fear is that if China’s economy falls, the country won’t continue to buy solar panels, and this could cause even more pain for solar manufacturers.”

But Zach says every indication is those challenges are starting to lift.
“China’s government is going to spend on solar installations whether their economy continues to grow or not. They simply can’t afford to allow the pollution to get any worse.
“Natural gas prices may be low, but better technology is making it easier for the solar industry to compete with traditional energy sources.
“And we’re finally getting to a place where solar energy companies are able to operate profitably. That’s great news for solar investors.”
OK, you say, but how do you generate income from all that? You do it by applying Zach’s “retirement loophole.” Again, he showed his premium subscribers how to pull down a quick $250 ten days ago.
In fact, so far this month, they’ve had a chance to collect $810 in instant payouts using Zach’s strategy. We’ve told you about it before. And we’ve told you how Zach convinced our publisher to make an unprecedented offer: Try one of his recommended trades, and if you somehow manage to lose money — Zach has a 98.4% win rate — we’ll send you a check to cover the loss.
So there’s truly nothing to lose — as long as you act soon. We can’t keep the offer going forever, and I just got word the offer comes off the table at midnight next Tuesday. Check it out now while there’s still time.

No self-respecting CEO should ever look forward to being “asked” to go to Washington for “talks” with White House and congressional staffers.
That was our thought upon seeing this story in today’s Wall Street Journal: “White House and congressional staffers have asked Silicon Valley executives for new talks in Washington, D.C., to resolve a standoff over encrypted communication tools in the wake of the Paris terrorist attacks, people familiar with the matter said.”
Oy. This is a donnybrook that’s been ongoing for more than a year. The feds don’t like it that Apple’s newest version of iOS and Google’s newest version of Android have “end-to-end” encryption — the gold standard for security. The feds want a “back door” so they’d still have access to encrypted communications. Because “teh terrists,” natch.
If you’re not up to speed on the issue, colleague Chris Campbell unspooled it on Wednesday in our sister e-letter Laissez Faire Today.
As long as we’re in wishful-thinking mode today with the Federal Reserve going on strike, we also have a fantasy about Apple and Google sending the feds a brief letter that reads something like this:

“You do realize that…

“In light of the foregoing, kindly go jump in the lake.

“Sincerely yours,
“Tim Cook
Larry Page”
In lieu of such a letter, we can take heart that the Journal informs us Silicon Valley is no more inclined to cooperate with the feds now than it was before the Paris attacks.

If you’re reading this, chances are you belong to the half of U.S. taxpayers who pay 97.2% of all individual income taxes.
The IRS recently released extensive figures on income taxes for 2013… and the Tax Foundation has performed a comprehensive analysis: “The data demonstrates that the U.S. individual income tax continues to be progressive, borne mainly by the highest income earners.”
So if you fall into the top 5% of income earners — but you’re not part of “the 1%” — you and your peers earned 15.4% of the income… and paid 20.7% of the taxes. 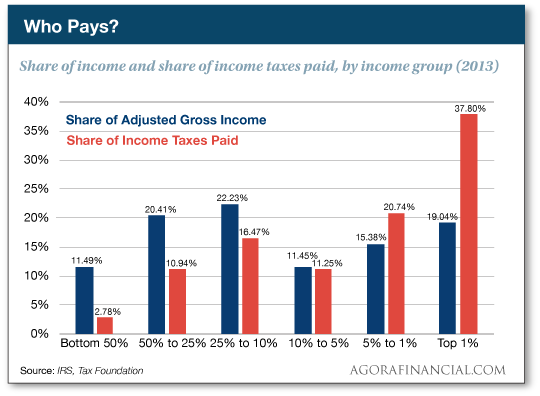 If you’re wondering where your income fits into this scheme, here are the thresholds to make it into each category:

Perhaps not surprisingly, the threshold for each of these percentiles in 2013 is higher than it was in 2012 — with one exception. It took $434,682 to make it into the top 1% in 2012.
That’s the impact of the highest incomes reverting to Clinton-era tax rates in 2013. Not coincidentally, the threshold for those rates was $450,000 for couples.

As we anticipated at this time a year ago, the average cost of Thanksgiving dinner has now surpassed $50 for the first time.
The American Farm Bureau is out with its annual estimate, based on the efforts of 138 volunteer shoppers in 32 states… and the bird flu has taken its toll. Feeding a family of 10 will cost $50.11 — up 70 cents from a year ago. 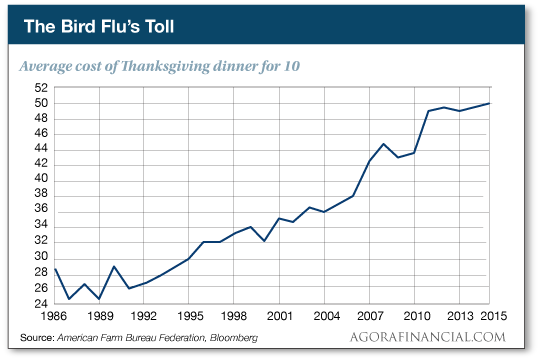 A 16-pound turkey that cost $21.65 last year costs $23.04 this year. Bird flu prompted farmers to destroy 7.7 million turkeys earlier this year, according to federal figures.
Helping to ease the pinch are drops in the prices of milk, whipping cream and cranberries.
If these figures don’t square with your experience… we pointed out last year it’s in the Farm Bureau’s interest to come up with a lowball estimate made possible by factory-farmed turkey and store-bought pie crust.
And as several readers pointed out a year ago, it excludes the second-most important item, after the turkey — the booze!

“If the Fed raises rates and then needs to come back and start printing funny money to cover that screw-up, well, isn’t that the way it’s always been?” a reader muses after yesterday’s episode?
The 5: Sure, drag us back into the heavy stuff as the week winds down.
But yes, it was ever thus. In the last rate-raising cycle, the Greenspan Fed started raising rates in mid-2004 — quarter-percentage-point increments, every six weeks like clockwork. By mid-2006, the fed funds rate was up to 5.25%.
Only a year later, Jim Cramer was melting down on live TV, screaming at Ben Bernanke to “open the discount window!” Bernanke accommodated a few days later, and the Fed panic-cut the fed funds rate starting in September 2007.
And now? Conventional wisdom says if the Fed raises next month, it will wait a long time until raising again — “one and done,” as the saying goes.
Jim Rickards doesn’t buy it. “At a minimum,” he says, “some expectations will move forward so the impact of a policy change is like compressing several rate hikes into a single instantaneous event. The Fed’s efforts to displace uncertainty through transparent communications have replaced former policy uncertainty with communications uncertainty about whether the Fed really means what it says.
“After policy surprises at the September 2013 and March and September 2015 FOMC meetings, there’s no reason to credit the Fed’s promises of a slow tempo of future increases. The market will begin to price a more rapid pace regardless of what soothing words the Fed offers.
“The reaction function will be capital flight from emerging markets, a stronger dollar, imported deflation and a slower U.S. economy. All of this will occur at a time when the global economy is already slowing perceptibly.
“Expect unexpected shocks if the Fed raises rates,” Jim concludes.
You heard it here first…
Have a good weekend,
Dave Gonigam
The 5 Min. Forecast
P.S. No matter what the Fed does next month, you can invest tactically using Jim’s one-of-a-kind “Kissinger Cross” tool — showing you when to get into a trade and when to get out.
Readers like you have used the tool this year to generate gains including 102% in four months… 150% in less than a month… and 162% in under six months.
And the Kissinger Cross is saying it’s go-time for three new trades. Jim shows you how to put this tool to work in your own portfolio right here.