Tuning out the Noise for Fun and Profit

Here we go: As we write this morning, the market’s up about 1% for no obvious reason. The Federal Reserve has begun its two-day December meeting — at the end of which it will likely pull the fed funds rate up from near-zero levels for the first time in seven years.
Well, our trading desk told us there’d be volatility in the run-up to the big decision at 2:00 p.m. EST tomorrow.
“The first 15 minutes of trading this week were filled with bizarre pops and drops as traders and algos jockeyed for position,” Greg Guenthner says of yesterday’s action. “The tape had no rhyme or reason. And even when everyone settled in later in the morning, the market continued bucking back and forth until the major averages finally finished the day in the green.
“The odds say the Fed is gonna hike. But that’s all we know. Even if you hopped in your hot tub time machine and found out there was no question that the Fed was going to hike rates, there’s still no way to know how the market will react once it becomes reality Wednesday afternoon.”
The Fed is just one of many crosscurrents facing the markets as 2015 stumbles to a close — oil prices testing Panic of ’08 lows… the organized panic in junk bonds (about which more below)… to say nothing of David Stockman’s warning that the global economy is set to shrink for the first time since the 1930s.

“It should be obvious that if you’d bought Apple 15 years ago, you really needn’t have cared what the Fed was doing or what the latest readings were on the economy or any of the worthless stuff investors pay attention to,” writes our investment director Chris Mayer in his book 100 Baggers: Stocks That Return 100-to-1 and How to Find Them.
No doubt: At the end of 2000, AAPL traded for a split-adjusted price of $1.54. As we check our screens this morning, it’s $112.49. That’s a 73-bagger. Resilience.
Chris and his research team dug up scores of companies that survived and thrived despite the 1973 “oil shock”… the “double dip” recession of the late Carter-early Reagan years… the ’91 recession… the dot-com bust… the housing/financial bust.

Case in point: McDonald’s. Using 1970 as a starting point, MCD has grown every $1,000 invested into $699,750 today.
So not only do you need a resilient company… you also need a patient temperament.
“Unless you inherit stocks from a smart and patient family member, chances are slim you or I will ever buy and hold a small stock that long to see a gain that big,” says Thompson Clark — who helped Chris with the research on his book.
Thompson is our microcap specialist here at Agora Financial. And he’s onto the story of a company that might one day prove as iconic a brand as McDonald’s.
And you won’t have to wait 45 years to collect a substantial payout. “By my conservative estimates, I calculate this company could easily rise from the sub-$3 level it’s at right now to at least $7.50 a share as early as the next earnings report.”
That’s up to 166% in a matter of months — despite the Fed, despite oil prices, despite a junk bond crisis. You get the point.
Thompson will release an extensive briefing to his readers about this company on Friday — three days from now. He makes his most compelling case for this timely opportunity when you click here.

Junk bonds are staging a recovery today — a case of short-term noise overwhelming a long-term trend.
Jim Rickards started warning us in January about stresses in high-yield corporate bonds that would become evident around now. Sure enough, volume in HYG — one of the big junk bond ETFs — set daily records last Tuesday ($2.1 billion) and last Friday ($4.3 billion). Yesterday. volume reached $3 billion.
“Critics fear that as soon as ETFs are faced with heavy redemptions, the liquidity of the underlying asset becomes paramount,” says today’s Financial Times. “Investors buy and sell shares in an ETF similar to trading stocks but when there is a large amount of buying or selling, investors can choose to create or redeem shares.
“Depending on the structure, either the ETF provider or market makers in the product are forced to sell the underlying bonds into an illiquid market to raise investors’ cash.”
No wonder the billionaire investor Carl Icahn echoed Jim’s warnings last Friday, tweeting about a “meltdown” in high yield.
[Ed. note: It was Jim’s “Kissinger Cross” tool that spotted these stresses in junk bonds nearly 12 months ago.
Jim’s next Kissinger Cross trade is due to be issued today. To learn more about how this technique works, check out Jim’s tutorial right here.]

“It will likely be a very, very long time before the Fed moves rates substantially,” says our income specialist Zach Scheidt.
Yes, the Fed will likely bump up the fed funds rate tomorrow. But “the Fed still wants to keep interest rates low,” Zach explains, “because it theoretically makes it easier for companies and individuals to borrow. Borrowing can help companies to grow and financially assist individuals with important purchases, like houses.
“It is important not to get caught up in the hype of whether the Fed raises interest rates in December or not. Instead, look at the big picture and know that interest rates will still stay low for many months (if not years) to come.”
That means investors who “reached for yield” by putting money into dividend-paying stocks might start to sell. But it’s not as if savings accounts and bank CDs will pay 5% again anytime soon. “There won’t be a mass exodus,” Zach says.
Besides, Zach has made sure his Lifetime Income Report readers have steered clear of the traditional dividend payers most vulnerable to a sell-off — including the “Canadian Social Security” strategy that’s gotten so much buzz this year.

There are two ways the Chinese can cope with the choking smog that’s descended over Beijing in recent days — neither of them very satisfactory.
For starters, we see a nonprofit called the China Biodiversity Conservation and Green Development Foundation is seeking unspecified damages from Volkswagen over VW’s big emissions scandal.
Heh… Never mind only 1,950 of the affected cars were exported to China. Not when there’s money to be had and MarketWatch informs us “the suit is the first public legal challenge the German automaker has faced over the matter.”

And then there’s the bottled air from Canada.
Vitality Air is the creation of two guys from Alberta. The product’s been available for a year, but lately demand from China is off the charts.
“We have sold everything, and we now have a bunch of customers and a people wanting to be our distributors,” Vitality Air’s China rep says.
The air is captured from one of two locations in the “Princess Province” of Alberta — either Banff or Lake Louise.
At first, the company just put the air in sealed plastic bags and sold them for 99 cents a pop on eBay. Now they’re selling canisters of compressed air for up to $46 each. 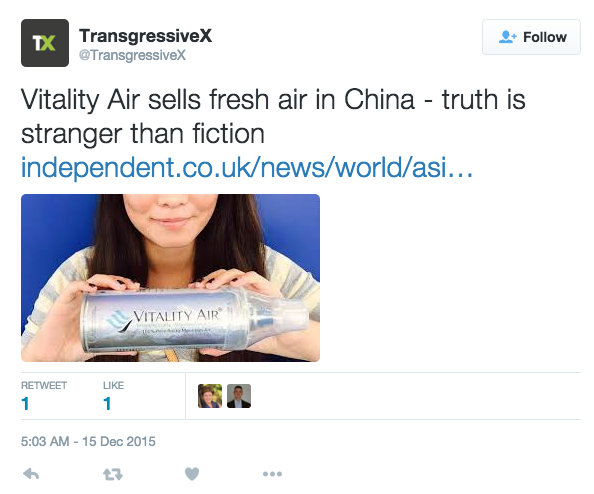 We suspect the margins on the latter are much better even if the production costs are substantially higher. Well-played, Vitality Air…

“With all due respect to Jim Rogers, who has one of the best investment track records out there and is a very good writer — the ‘Rogers Retracement Rule’ may have been around before Jim Rogers put it out there,” a reader writes after our gold-themed episode last Friday.
“In 1979, Ed Dobson wrote/published a book entitled The Trading Rule That Can Make You Rich.
The ‘Rule’ was the 50% Retracement Rule.
“It was immediately validated when from 1978 or so to 1982 or so, gold went from:

“Then, of course, it plunged again.
“Gold has always been a wonderful trading vehicle for this rule and several other basic trading rules. Probably because of the huge number of entities trading it. It might actually be a fair market.”
The 5: Sure, open the gold-manipulation can of worms!
As for the ultimate origin of the 50% retracement rule, we concede we’re stumped — other than to invoke that adage about success having a thousand fathers.

“I notice everyone is beating up on the malinvestment in mining, etc.,” a reader writes after David Stockman’s observations here yesterday.
“Why is no one commenting on the malinvestment in government — how much it has grown and the consequences?
“Mining companies are reacting, but the government — state and federal — is living in in its own world. Do we ever hear of any reductions due to the consequences of government revenues going down?
“This is the real threat — not private industry, which will always revert to the mean. Governments never do.
“Let’s focus on the real threats. Private can look after itself.”
The 5: Around here, we take it for granted that government will continue to metastasize.
We don’t like it any more than you do. But the unfortunate fact is there’s headroom for that growth to continue before something breaks catastrophically.
Government spending accounts for 41.6% of GDP in the United States, according to The Heritage Foundation. But — for the sake of random comparison — in Germany, it’s 45.4% and in France, 56.1%. And those governments keep chugging along…
There’s not much we can do about it, other than invest around it. We’ll never stop looking for ways to do so…
Best regards,
Dave Gonigam
The 5 Min. Forecast
P.S. We got a greater-than-expected response to the live event David Stockman held last night.
More than 10,000 people signed up to listen in. It couldn’t have been more timely, with the Fed likely moving away from zero interest rate policy starting tomorrow. David believes that one move will soon shatter “the entire regime of bubble finance” that’s been Fed policy for more than two decades.
Fortunes will be lost for many… but for the farseeing, new fortunes will be made.
The information revealed in the event was extremely time-sensitive in light of the Fed decision. So if you missed it last night, we don’t want you to miss out.
But all the same, it will be dated by the time the Fed issues its statement tomorrow afternoon.
We’re going to leave the archived recording of last night’s session online for only a few more hours. At 9:00 p.m. EST, it will come offline for good. So check it out now, while you still can