Profiting From the Frugality of Others

“I never knew paying off debt was so profitable,” said the email from our microcap specialist Thompson Clark.
As we’ve done much of this week, we’re in hot pursuit of opportunities immune, or at least resistant, to the Fed-driven ups and downs of the market.
After all, a CEO can’t do anything about the Fed. But there are many things within a CEO’s control that can make his firm more valuable and enrich his shareholders.

“Now imagine a scenario where your friend decides enough is enough,” Thompson goes on. “He’s tired of these house payments.
“He takes on a second job to supplement his income. That helps. But most importantly, he cuts his costs down to the bone. The bare bone. No more trips or eating out. He takes the bus instead of driving to work. He’s living extremely frugally.
“The benefit comes in his second year. Now he’s able to really increase the equity in his home. Let’s say he increases his payments from $1,250 a month to $3,500 per month. What’s his equity look like at the end of the year?
“Well, if we assume he pays $1,000 in interest and then the remaining $2,500 is going to pay down the principal, his equity grows from $28,000 to $58,000. His net worth increased by 107% just by increasing his house payments. This was a direct result of cutting costs and improving his margins.”

Of course, companies can do the same thing. Thompson has spotted a company aggressively paying down its debt. He’s run the numbers and figures it could generate 122% within the next 24 months.
Those are the sorts of opportunities Thompson uncovers all the time for his premium service, Agora Financial’s Microcap Millionaires.
This afternoon, he plans to release a comprehensive briefing on another microcap firm — one with even bigger 24-month potential. He says this company “could be the strongest and biggest brand to hit the scene since McDonald’s or Starbucks.”
Starbucks? That’s grown 1,400% in the last seven years alone. Thompson figures it’s good for as much as 455% during the next two years. If you’d like access to this report — again, he’s releasing it this afternoon — you can get started at this link.

“Post-Fed letdown,” as we called it yesterday, is stretching into this final day of the trading week.
By day’s end yesterday, the major U.S. indexes had given up all their gains of the day before and then some. As we write this morning, we see nothing but red: The Dow has shed another 185 points. The S&P 500 has tumbled to 2,023 — racing toward last week’s close of 2,012.
But stocks’ losses are other asset classes’ gain. Treasuries are rallying again, sending yields down: The 10-year yield is approaching 2.2%.
Gold, after testing support near $1,050 yesterday, has rallied to $1,067 today. And that’s honest-to-God demand for gold, not a weakening dollar. The dollar index has pulled back, but not much, at 98.8.

“Of course, nothing of the sort will actually happen,” Jim says. True, it will probably raise rates in March, and again in June.
But then? It comes back to Jim’s big call for next year: “By mid-2016, the weakening U.S. economy, recessionary global conditions and vanishing inflation will make it apparent, even to the Fed, that they have raised into weakness. At the point, we can expect a ‘pause’ (amplified by forward guidance about no future rate hikes), and ultimately some rate cuts in late 2016.
“This ‘back to zero’ scenario is based on a looming global recession affecting the U.S. In her press conference, Janet Yellen said she saw no signs of a recession in the U.S. However, the Fed has never correctly forecast a recession. The Fed simply never sees recessions in advance, and this time will be no exception.
“Seven major central banks have raised rates in the past five years only to go back to zero once their economies faltered. The Fed will be the next central bank to fall back to Earth.”
[Ed. note: If you missed Jim’s “Critical Warning No. 3,” you’re losing out. He’s issued this kind of update only twice before during 2015. Both times were about massive changes in the markets. This time it’s even bigger… and it has nothing to do with the Fed. Not directly, anyway.
The video takes only two minutes to watch. Check it out right here.]

There are worse places to hide out in this churning market right now than consumer staples, says Greg Guenthner of our trading desk.
“I’ll be the first to tell you that canned soup, cola and cleaning products are about as boring as it gets,” he says. “But these boring stocks are at or near their highs right now — and producing incredible gains for anyone willing to ignore all the noise about the Fed or oil prices from the idiot box… 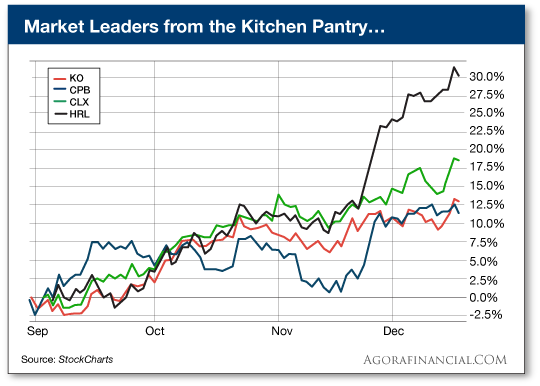 “Hormel Foods is up a staggering 55% year to date,” Greg goes on. “Not bad for a company known for its canned chili. Along with Hormel, you’ll see that Clorox, Campbell Soup and Coca-Cola are all up double digits since Sept. 1.
“As a group, consumer staples are a market leader. The Consumer Staples Select Sector SPDR (NYSE:XLP) is up more than 6.5% in 2015.
“These consumer staples names are typically considered defensive stocks. But right now they’re playing offense in a big way.”

Attention drone owners: You have scads of new federal regulations to comply with effective Monday. Happy Holidays!
The FAA issued its long-awaited drone rules this week — a development we’ve been anticipating ever since we interviewed Makers author Chris Anderson nearly three years ago.
“What if,” Anderson said here in The 5 in May 2013, “every morning, a drone would take off at the crack of dawn, do a lawn-mower pattern over the crop, and by breakfast you’d have the daily report — which, depending on whatever crop you had, tomatoes or wheat or grapes or whatever, would be able to tell you if you have a pest outbreak, a fungal outbreak or a disease outbreak? That kind of information turns out to be incredibly valuable to farmers because it can save a lot of money.
“The personal drone is basically the peace dividend of the smartphone wars, which is to say that the components in a smartphone — the sensors, the GPS, the camera, the ARM core processors, the wireless, the memory, the battery — all that stuff, which is being driven by the incredible economies of scale and innovation machines at Apple, Google and others, is available for a few dollars.”

So here goes: “The FAA wants every American to register every drone that weighs more than about half a pound, or 250 grams,” writes Scott Shackford at Reason.
And that applies not just to new drone purchases. That’s right, the registry is retroactive! And if you do buy a new one, you must register it before you fly it outdoors. Registration will cost $5, but that fee will be refunded if you register before Jan. 21. (One fee covers all your drones if you own more than one.) You’ll then get a registration number you must put on the drone.
The fines if you don’t comply? They’re stiff — a civil fine of up to $27,500 and criminal penalties up to $250,000 and three years in prison.
“Of course, technology being what it is,” writes Mr. Shackford, “it’s easy to imagine this new rule being just another incentive for drone manufacturers to find ways to make their products smaller and smaller so as not to force customers into a federal registration regime.”

Your government in action, Afghanistan edition: If anything, this is worse than our item a few weeks ago about the $43 million gas station the military built that should have cost $500,000.
The inspector general for U.S. operations in Afghanistan is out with another blockbuster report, this one about reconstruction efforts by the U.S. Agency for International Development.
USAID has overseen projects like a new wall around a schoolyard ($64,597) and an irrigation system in a village ($41,792). All told, USAID has spent $418 million over the last six years.
And they’ve had the effect of bolstering support for the Taliban.
“Villagers believed that the projects would not have been allowed to take place without the Taliban’s approval,” says a New York Times summary of the inspector general’s report, “and so their support for the Taliban, rather than for the United States or the Afghan government, actually increased because of the aid.”
Usually, we have a snarky remark to make at the end of an item like this. Not here. We’re speechless…

“Why not change the name of the newsletter from The 5 to The 10?” a reader suggests, as the persistent topic of how-long-it-takes-to-read-The 5 popped up again this week.
“That way, all of the slow readers can feel smart when they read the newsletter in eight minutes and ‘beat the clock.’”

“Dave, kudos to Jim Rickards for the right call,” a reader writes — presumably referring to Jim’s call on the Fed raising rates this week, not to mention his gutsier calls about the Fed not raising rates any other time this year.
“The problem with Jim,” the reader goes on, “is that he should add music to his videos.” The reader sent this along as an example… 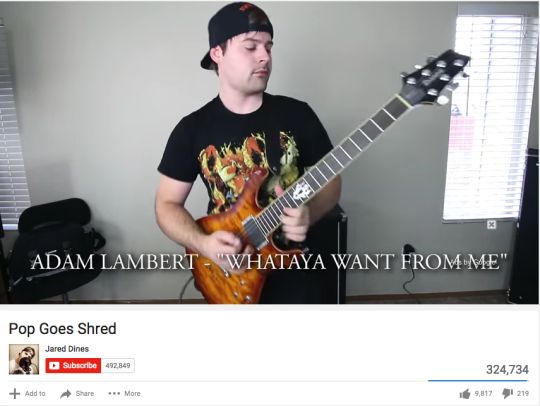 The 5: Uhhh… We’ll take everyone’s suggestions under advisement.
Have a good weekend,
Dave Gonigam
The 5 Min. Forecast
P.S. According to a survivor of the worst financial collapse in modern history, three of the four “currency collapse triggers” have already been activated in America.
When this fourth trigger hits… it will be too late.
What are these triggers? How can you prepare?
Click here to learn more.