The New Year’s market jitters aren’t just about China. Nor about “emerging markets” in general, as The Wall Street Journal’s front page would have us believe this morning.
“Emerging-market currencies from China to Russia dropped against the U.S. dollar,” it said, “reflecting renewed fears that an economic slowdown in the world’s most populous nation will further depress struggling developing economies.”
In the context of the global currency wars, that’s tunnel vision. Yes, China has pegged the yuan to its lowest level against the dollar in four years. The Brazilian real and Turkish lira sold off 2% against the dollar yesterday.

But don’t overlook the flip side of a rising dollar — which gives American-based global behemoths a kick in the teeth, because their exports become more expensive for foreigners.
The most common measure of the dollar relative to other currencies is the “dollar index.” As such yardsticks go, it’s terribly flawed. Only six other currencies go into the index, they’re all from developed economies and the euro makes up 57% of the index.
A better measure is the Federal Reserve’s trade-weighted dollar index, incorporating a wide basket of currencies from both developed and emerging markets. The number comes out only once a week, but it’s easy to spot long-term trends. The last two weeks, the number’s been the highest in nearly 13 years… 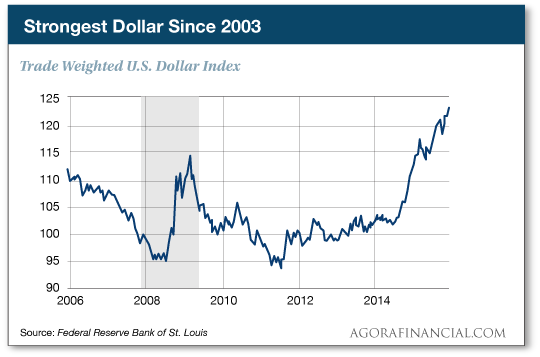 With almost half of all revenue for S&P 500 companies coming from overseas, it’s a wonder the broad stock market hasn’t struggled even more than it has in the past year.

With that context, it’s time to unveil another of our forecasts for 2016 — or rather, update a forecast that we previewed late last year.
As you might recall, Jim Rickards believes the Federal Reserve will move to ease policy later this year… even as it’s in tightening mode right now.
Let’s go back to the Fed’s decision to raise its benchmark fed funds rate by a quarter-percentage point on Dec. 16. “While Janet Yellen was careful to say that future Fed policy is data dependent and not on a set schedule,” Jim writes, “she did, to all intents and purposes, lay out a schedule based on her forecast for economic growth and inflation. The implied tightening cycle for the target Fed funds rate is 100 basis points [1 percentage point] per year for three years (through the end of 2018).”
On that pace, the fed funds rate would rise from its present range of 0.25-0.50% to roughly 3.25-3.50% by year-end 2018. (Which, by the way, is still way below the long-term average.)

Spoiler alert: There’s no way in hell we’ll reach a fed funds rate north of 3% over the next three years.
“The Fed’s expected path is based on internal models of the interaction of labor markets, growth and inflation,” says Jim. “These models are badly flawed and obsolete.
“For evidence, we need look no further than the fact that Fed one-year forward growth forecasts have been incorrect by orders of magnitude for nine straight years.”
Then, invoking the old saw about second marriages, Jim says, “A belief that the Fed forecast for 2016 is close to accurate represents the triumph of hope over experience.”

Let’s lay out a timetable for 2016. There are eight meetings of the Fed’s Open Market Committee — four of them featuring a Janet Yellen news conference, when major announcements tend to be made.

“There are two risks to this forecast,” Jim concludes, always mindful of probabilities.
“The first is that the recession data are overwhelming by spring, causing the Fed to hold off on the June rate hike. The second is that the Fed hikes again in September because not raising is seen as a form of ease with adverse political repercussions for the Fed.”
[Ed. note: Heh… And you thought all the drama was over when the Fed raised rates last month.
Look, we’re as frustrated as you are. It would be nice to assess investment possibilities without the dead hand of the Fed always looming in the background. And for that matter, the rest of the world’s central banks.
But it’s at this moment, this key inflection point in the currency wars, that some of the most lucrative profit opportunities are about to open up. And Jim is ready to guide you the whole way. He posted a new — and brief, only 60 seconds or so — video message yesterday afternoon. It’s so time sensitive that we’re taking it down in less than a week. So give it a look while there’s still time.]

The China-fueled market freakout appears to have been a one-day proposition.
The open in Shanghai was ugly — another drop of nearly 5% — but within a half-hour the CSI 300 index whipsawed into positive territory. It closed the day up 0.3%.
The not-so-invisible hand of the Chinese government was in action: Traders saw evidence that state-owned financial institutions resumed buying stocks, despite a promise late last year that they’d stop doing so.
In addition, regulators hinted they’d extend a ban on selling by anyone who owns more than 5% of a company’s shares. At present, though, it’s still set to expire on Friday. Nothing like predictability, huh?

Stateside, the major U.S. indexes are down again — but not much. At last check, the S&P 500 was off less than three points, at 2,010.
Treasuries are selling off, the 10-year yield approaching 2.25%. But gold is holding onto yesterday’s gains at $1,077.
Crude, which rallied big yesterday on rising Sunni-Shia tensions in the Middle East, collapsed soon after we went to virtual press. This morning, a barrel of West Texas Intermediate trades at $36.19.

“I think things could get worse,” says our investment director Chris Mayer of events in China. “Look no further than how any modern banking system works.”
Over the holidays, Chris tucked into the book Why Minsky Matters: An Introduction of the Work of a Maverick Economist. If you’ve ever heard the term “Minsky moment,” it’s named after the 20th-century American economist Hyman Minsky. Minsky studied how credit works its way through an economy. He identified three kinds of credit — hedge, speculative and Ponzi.
“Let’s think about how a business or household might finance itself,” Chris explains. “It could finance itself in such a way that expected income could meet all obligations, both principal and interest. This Minsky called a ‘hedge’ position. It’s the most robust and strongest position.
“Second, you could finance yourself in such a way that your income could meet interest payments, but not principal. An example: You have a seven-year mortgage that you can pay comfortably but will need to refinance when it comes due. This Minsky dubbed ‘speculative.’
“And finally, you could finance yourself in such a way that your income couldn’t meet interest or principal. In this case, you’d need to sell an asset to meet your obligations. An example: a homebuilder who borrows to build a development and needs to sell some houses to make payments on the debt. Minsky called this a ‘Ponzi’ position.”

“Over the course of an expansion, the mix of speculative and Ponzi positions increases,” Chris goes on. “This in turn increases the fragility of the system. It makes it vulnerable to unexpected drops in income or a rise in interest rates.
“And this is why things will get worse in China. It had a long bull run. It was the fastest-growing major economy for about three decades. There have been huge investments in assets. Credit fueled those investments — especially since 2008.
“Now you have things going not quite as planned. As expectations shift, borrowers will be less willing to borrow and lenders less willing to lend. Asset prices will fall. And the Ponzi positions will fall apart.
“Before you know it, China has its own ‘Minsky Moment.’
“In the short term, it will be painful. But it will also create some fantastic opportunities. Because when markets get like this, everything goes down. This allows you to pick up prime assets on the cheap.”

“Lay off the distilled water, Dave. It’s unhealthy,” a reader implores after yesterday’s episode. “I recommend Irish whiskey. It clarifies the mind.”
The 5: Funny you should mention that. “The previous year’s most consistent whiskey storyline was the ‘whiskey shortage,’ spawning a plethora of articles in the whiskey press and the larger mainstream media, running right up to the last days of 2015,” writes Richard Thomas at The Whiskey Reviewer.
We daresay even The 5 got in on the action last spring. But to hear Thomas tell it, it’s mostly the invention of whiskey-makers with a good mind for marketing.
“Every year,” he writes with a for-instance, “Buffalo Trace puts out a press release warning its consumers that demand for its most hotly sought-after whiskeys — Pappy Van Winkle, the Buffalo Trace Antique Collection, W.L. Weller 12 — greatly exceeds supply and allocation will continue. This announcement was followed by a now-routine, just-as-annual torrent of articles that take the genuine shortages of a handful of brands from just one distillery and use them to spin frightful tales of all bourbon everywhere running out.”
Evidently, other producers caught onto the ploy last year and “whiskey shortage” became a thing. Concludes Mr. Thomas, “As Public Enemy told us back in the day, ‘Don’t believe the hype.’”

“I was wondering,” a reader muses, “how much of the fall in the Dow yesterday was due to the drop in Amazon and Netflix because they were downgraded in their ratings?
“I know that David Stockman has been saying that Amazon would be the short of the century, and it would be nice to extrapolate how much a crash in Amazon would cause in the Dow. It seems if all four FANG stocks fell at the same time that the Dow would be obliterated.”
The 5: The Dow? No impact at all. None of the FANG names — Facebook, Amazon, Netflix, Google — are among the 30 stocks making up the Dow “Industrials.”
Amazon trading at $628 a share would be especially problematic since the Dow is a price-weighted index; higher-priced stocks exert more of an influence. That’s why Apple wasn’t added to the Dow until it did a seven-for-one stock split.

“Today, disappointing,” a reader writes after yesterday’s episode. “Should have been better.”
That’s all the email said.
Thanks for the specificity. We’ll get right on it!
Best regards,
Dave Gonigam
The 5 Min. Forecast
P.S. One of America’s four living ex-presidents is hiding something that could lead investors to a fortune.
The most interesting part: It’s INSIDE his body.
A professional research team spent nearly a year compiling their findings, and put it all on their exclusive website.
Go here to see the mystery they’ve discovered, and how it could deliver you staggering gains.