Let’s see if we have this straight.
In its every-six-weeks policy statement issued yesterday, the Federal Reserve said it’s “closely monitoring global economic and financial developments” — something it usually doesn’t say, which conveys a measure of concern.
Gold traders’ reaction: Oooh, that’s “dovish.” Maybe they won’t raise the fed funds rate in March, as they say they will. Gold pushed past $1,125 for the first time since Halloween.
But wait! The statement didn’t explicitly rule out an increase in March.
Stock traders’ reaction: Oooh, that’s “hawkish.” The Dow industrials shed 223 points by day’s end.
We marvel at the absurdity of it all. And that’s not the half of it.

Our Jim Rickards knows the people who craft the policy statements the Fed cranks out every six weeks. “If you knew how arbitrary this process is, you wouldn’t know whether to laugh or cry,” Jim said on Bloomberg TV this morning.
Jim says the Fed governors are still wedded to flawed models instead of the real world. For instance — the “Phillips curve.”
“The Phillips curve is the discredited belief that there is some trade-off between employment and inflation,” Jim explains. “Tight labor markets give rise to demands for higher wages by workers, which lead to higher prices by companies to pay the wages, which lead to higher wage demands, etc., in an inflationary spiral sometimes referred to as ‘demand-pull inflation.’
“This is mostly neo-Keynesian nonsense. It may apply in some special cases (1965–69), but it clearly does not apply in the general case. The Phillips curve was thoroughly discredited in the late 1970s (high inflation and recession coexisted, called ‘stagflation’). Janet Yellen clings to it like Linus with his blanket. What the Phillips curve and Linus’ blanket have in common is they are both in shreds.”

Which brings us to this gem from yesterday’s Fed statement: “Inflation is expected to remain low in the near term, in part because of the further declines in energy prices, but to rise to 2% over the medium term as the transitory effects of declines in energy and import prices dissipate and the labor market strengthens further.”
Puh-leeze, says Jim: “Inflation today is nowhere in sight, and deflation is the greater risk. Only Yellen and a few like-minded Fed officials see inflation as a risk, because they’re looking at models, not the real world.”
Jim says the Fed is still on track for an increase in March, barring a poor jobs number (under 100,000 new jobs in a month) or the S&P 500 tumbling below 1,700. (As we check our screens this morning, it’s 1,886.)
[Ed. note: Jim’s latest “Kissinger Cross” recommendation, issued on Monday, has up to 300% profit potential over the next two years. “When the consensus is missing a turnaround story,” he says, “that’s the kind of contrary bet we like.”
To learn how the Kissinger Cross indicator works, and for access to all the trades in Rickards’ Intelligence Triggers, follow this link.]

The big economic number of the day stunk up the joint, reinforcing Jim Rickards’ point that the Fed insists on “tightening into weakness.”
The Commerce Department tracks orders of durable goods — items intended to last three years or longer. The number is problematic. It includes everything from washing machines to jet engines. And the number is notoriously volatile.
That said, the number took a 5.1% spill in December. The year-over-year change works out to minus 0.6%.
If you throw out aircraft and defense equipment, the numbers are abysmal — down 4.3% for the month and 7.5% for the year. Computers — considered by some analysts a good indicator of future activity — are down 8.7% for the month. Communications equipment tumbled 21%.

The Fed statement was so yesterday, as far as markets are concerned today.
The major U.S. stock indexes are barely in the green. Gold has given up most of yesterday’s gains, the bid at last check $1,115. The 10-year Treasury yield is a skootch below 2%.

The big mover is crude, up 3% on rumors of a development first hinted at in this space in December.
Reuters says Russia’s energy minister is “ready to meet in any format” with ministers from OPEC in general and Saudi Arabia in particular. The topic — a joint agreement to cut production.
Is Russia crying uncle as Saudi Arabia keeps the spigots wide open? Back on Dec. 9, hedge fund manager Erik Townsend told us how Saudi Arabia’s oil minister has been “employing mafia tactics and making Russia an offer they can’t refuse. Specifically, he’s willing to drive the market into the ground in order to force Russia’s hand.”
For the moment, OPEC says there’s nothing to the chatter of a meeting. Maybe there’s not. Or maybe OPEC wants to strengthen its negotiating position and let the Russkies twist in the wind a little bit longer.
West Texas Intermediate spiked as high as $34.13 earlier. With OPEC issuing denials, it’s now pulled back to $33.09.

Maybe it’s not “peak iPhone” but “peak smartphone.”
South Korea’s Samsung, the world’s No. 1 smartphone maker, warned yesterday that profits this year likely won’t equal those of last year. The firm anticipates “challenging business conditions” through the first half of 2016.
That comes on the heels of Apple reporting its first quarterly sales drop in 13 years — news that sent AAPL tumbling 6.5% yesterday.
None of which matters to Trading Guru X — the man we’ve been introducing you to all week. (We’ll reveal his name next week.) He’s become a multimillionaire applying a unique system: “There’s no need to calculate P/Es, estimate growth or analyze profitability,” he says. “None of those things will actually put money in your pocket.”
Since we’re talking telecom today, let’s look at the case of Global Telecom & Tech (GTT). In late 2011, its P/E was 27. “Ask any investor and they will tell you that’s a high valuation,” says Trading Guru X, “especially for a boring telecom company. Most investors would wait for the stock to move lower before buying it.”
But rather than wait to buy, Trading Guru X’s system told him to buy with both hands. It was the right call. 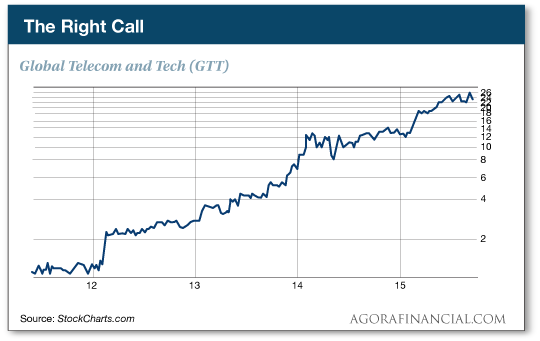 “If you had invested a small stake of $10,000 in this trade, you would have $163,500 today.”
That’s the kind of money you can make ignoring one of Wall Street’s cherished “rules.”
What rule is that? We’ll pull back the veil next week.

“You know that Apple sales are in trouble when even China’s fake Apple stores no longer want to sell counterfeits,” says a snarky entry at Fark.com.
Heh… In the summer of 2011, The 5 related the story of an American blogger in China who noticed three Apple stores within a 10-minute walk of each other in Kunming. Every one of them was a phony. 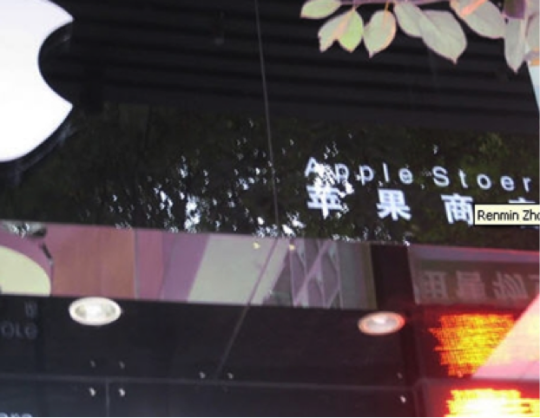 If “store” is misspelled, that’s usually a dead giveaway.

Seriously? Apple ditched that version of the logo in 1997!

As recently as September of last year, a Reuters reporter counted more than 30 fake Apple stores in Shenzhen.
Fast-forward a mere four months and that number is now down to 20, “some replaced by unauthorized stores selling locally branded phones from Huawei, Xiaomi, Meizu and Oppo,” the newswire tells us.
Perhaps it’s a case of Apple pressuring the Chinese government to crack down; Apple is mum on that matter. But if that’s the case, why now and not any other time since 2011?
More plausible is this: “It’s not as cool as before to have an iPhone,” said an assistant at one of the remaining Apple copycats. She says sales have been cut in half since the debut of the latest model, in October.

“I’ve enjoyed the insights from The 5 Min. Forecast,” reads an item in our mailbag, “for quite some time.”
[This is where the inevitable “but” comes in…]
“I’ve also done my own extensive research on the premise that there has been a collectivist movement on a global scale for over 100 years!”
[No “but”?]
“The creation of the Federal Reserve in 1913 was strategic in consolidating this movement, with virtually every country in the world having adopted central bank principles and policy. 1971 was the game changer, when President Nixon removed the U.S. dollar from the gold standard.
“The last 45 years, with the capability of technology, has flooded the world with fiat currencies and created unprecedented consumption and credit expansion never seen in human history. If collectivism is the agenda, enslavement is the objective. Then it would seem that bankrupting the global economy, creating as much chaos and conflict as possible and bringing humanity to its knees would lead to providing a solution to relieve the pain and anxiety.
“A one-world currency has been created and managed by a controlling elite who have elevated themselves with a sociopathic nature and view mere humans as a commodity to be used and exploited for their entertainment and subsistence. Wake-up calls are everywhere!”
The 5: Well, that’s the worst-case scenario. But it’s well within the realm of possibility…

“You said…” begins a reader, who proceeds to quote us from last week…
“Took long enough, but it’s finally dawning on the elites that all their Humpty Dumpty solutions to the Panic of ’08 — all the fiscal and monetary equivalents of chewing gum and baling wire — haven’t done squat.”
Back to our reader: “Thought you said these past few years it’s made them richer, squashed the middle class and made the poor poorer. To them, that might be deemed a success.”
The 5: True, that. It’s the process of “extraction” — a delicious phrase used by pundits as diverse as Dylan Ratigan and Paul Craig Roberts.
Our point was that the elites’ party can’t go on forever. The piper must be paid.

“I heard about your subscription-based website, and Jim Rickards’ Strategic Intelligence, after watching Nomi Prins on Keiser Report,” writes a new reader.
“Looking forward to learning about more of what I heard today. Not all actors are as dumb as the ones you see on a regular basis.”
The 5: Welcome aboard. Ms. Prins became a contributor to Jim Rickards’ Strategic Intelligence this month. She’ll also show up from time to time at The Daily Reckoning.
She has an impressive pedigree: She’s seen Goldman Sachs and other investment banks from the inside… only to write blistering exposé books like It Takes a Pillage and All the Presidents’ Bankers. In short, she’s right up our alley here at Agora Financial.
Best regards,
Dave Gonigam
The 5 Min. Forecast
P.S. Have you seen Jim Rickards’ FREE Web page? It looks just like this: 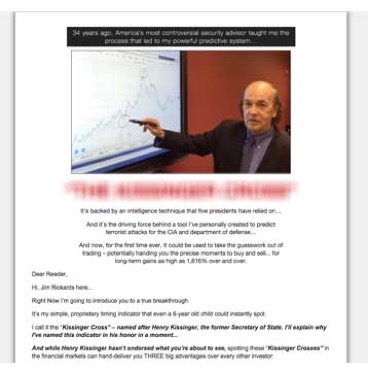 On this free Web page, Jim reveals his latest strategy. And he’s proven the concept behind it can do two pretty remarkable things:

Sounds nuts, right? It’s not.
Click here to see how it works.