We can’t remember the last time we’ve seen such candor — in public, anyway — from a central banker.
“We won’t see the next crisis coming,” says Neel Kashkari, president at the Federal Reserve Bank of Minneapolis.
Wow…
During the Panic of 2008’s darkest days, Treasury Secretary Hank Paulson appointed Mr. Kashkari as point man for the bank bailouts. His background was, well, interesting. At the time, he was 35 years old, an aerospace engineer by training. After a gig at NASA, he picked up a Wharton MBA and went to work at Goldman Sachs.
At the time, we were contemptuous: “We’re about to spend $700 billion,” mused our fearless leader Addison Wiggin here in The 5. “Perfect, let’s go find a young, brainy technocrat to decide where. That ought to do the trick. Why bother with history, economics, philosophy or any of those trite humanistic trades?”

But it seems Mr. Kashkari learned a thing or two on the job. “I believe the biggest banks are still too big to fail and continue to pose a significant, ongoing risk to our economy,” he said yesterday at the Brookings Institution in Washington.
It was his first speech as Minneapolis Fed chief. He went so far as to say the big banks should be broken up into “smaller, less connected, less important entities.” 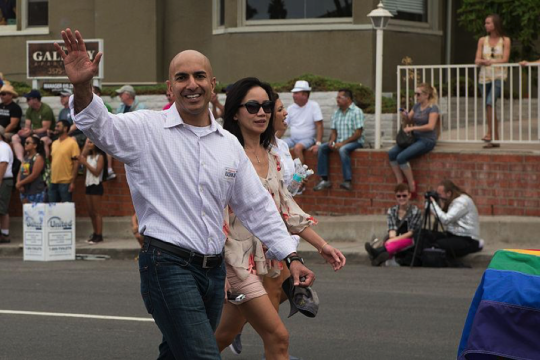 Kashkari settled for the Minneapolis Fed gig after losing to Jerry Brown in the 2014 California governor’s race. [Wikimedia Commons photo by Tristan Loper]

“There are lines in your speech I can imagine a Bernie Sanders or Elizabeth Warren saying,” said the event’s moderator. “It’s not what one expects from a Goldman Sachs Republican.”
Politics aside, there’s nothing like the right message at the right time, no?

“For the first time since 2008, it looks like central banks are losing control of the global financial system,” chimes in our Jim Rickards.
That was a prime reason gold zoomed past $1,250 on Thursday. The Swedish central bank had pushed its benchmark interest rate deeper into negative territory… while Federal Reserve chair Janet Yellen fessed up under questioning from Congress that negative rates were a possibility here too. (And yes, she preceded her answer with the word “so” — the Yellen drinking game is still alive and well.)
“Nobody really understands what’s happening, including me,” said celebrity billionaire Mark Cuban that day — acknowledging to CNBC he was buying gold.

And so the U.S. Mint’s dealer network has been busy buying all the inventory the Mint can produce.
As of Friday, the Mint’s “authorized purchasers” had snapped up 70,000 ounces of Gold Eagles during February. That figure is now 104,000.
Silver Eagles are likewise in demand: 2,045,500 Silver Eagles had exited the Mint’s doors as of last Friday. Now the number is 2,848,500.

“Gold is making an important change right now,” says Jim Rickards.
“At times, gold behaves like a commodity. The gold price tracks the ups and downs of commodity indexes. At other times, gold is viewed as a safe-haven investment. It competes with stocks and bonds for investor attention. And on occasion, gold assumes its role as the most stable long-term form of money the world has ever known.
“Right now, gold is behaving more like money than a commodity or investment. It is competing with central bank fiat money for asset allocations by global investors. That’s a big deal because it shows that citizens around the world are starting to lose confidence in other forms of money such as dollars, yuan, yen, euros and sterling.
“This is great news for those with price exposure to gold. The price of gold in many currencies is going up as confidence in those other currencies goes down. Confidence in currencies is dropping because investors are losing confidence in the central banks that print them.”

What’s the evidence gold is behaving more like money? “For one thing,” says Jim, “gold price action has diverged from the price action of other commodities. This divergence first appeared in late 2014, but has become more pronounced in recent months. 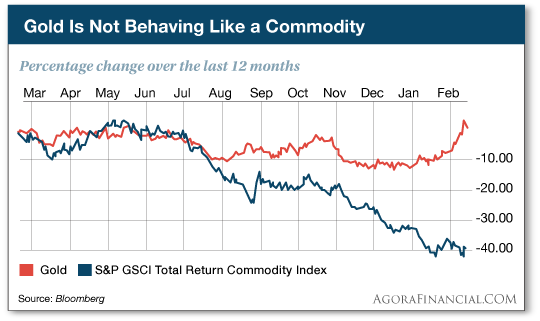 “From June 20, 2014–Jan. 15, 2016,” says Jim, “the broad-based commodity index fell 63%, while gold fell only 17%. The recent collapse in commodity prices was almost four times greater than the decline in gold prices.
“What is interesting is that when the price of gold is measured not in dollars but in rubles, yuan or rials, the percentage price increase in gold is even more impressive, because those currencies have all declined lately against the dollar.
“When you understand that gold is money and competes with other forms of money in a jumble of cross-rates with no anchor, you’ll know why the monetary system is going wobbly… We may be looking at the early stages of a similar super-spike that could take gold to $10,000 per ounce or higher.”
[Ed. note: Jim is less than two months away from publication of his next book, The New Case for Gold. It’s set for April 5. It will be available through Amazon and other resellers, but we’re working on bringing you an exclusive edition for Agora Financial readers with content you won’t be able to get anywhere else. Stay tuned…]

The last of these figures points to a pickup in inflation, however modest — which will likely reinforce the Fed’s determination to raise its fed funds rate again in March. That’s what Jim Rickards is forecasting… and at the moment, it remains an outlier forecast.

The moment has arrived: The feds are leaning on Apple — leaning hard — to change its “business model.”
As you might have heard, Apple plans to defy a federal judge’s order to help the feds unlock an iPhone belonging to one of the San Bernardino shooters from two months ago.
We figured something like this was coming: Since last fall, we’ve been telling you about FBI director James Comey’s obsession with end-to-end encryption — which Apple and Google use to secure the current versions of iOS and Android from hackers and other bad actors. But such encryption also locks out the feds. In December, Comey told Congress that Silicon Valley needs to change its “business model” to accommodate the government.
Now a judge is ordering Apple to effectively give the feds a “backdoor” to gunman Syed Farook’s iPhone. Typically, an iPhone allows only 10 tries to enter the four-digit passcode before it wipes the phone clean. The judge is telling Apple to allow the FBI unlimited attempts… and to allow many combinations to be tried at once.

The problem is that once such a technique is used on a dead terrorist’s phone, it could be used on everyone’s… and not only by the feds.
“Once created,” says Apple CEO Tim Cook, “the technique could be used over and over again, on any number of devices… The government is asking Apple to hack our own users and undermine decades of security advancements that protect our customers — including tens of millions of American citizens — from sophisticated hackers and cybercriminals…
“Opposing this order is not something we take lightly. We feel we must speak up in the face of what we see as an overreach by the U.S. government.”
Two thoughts here: One, it’s an interesting hill the feds have chosen to stand on. This isn’t about solving a crime; the San Bernardino perps are known, and they’re dead. But someone at the FBI must figure they can tug at public heartstrings by using the victims’ grieving relatives as a prop.
Second, what’s Android creator Google got to say about all this? Right now, nothing. Hmmm…

“It’s a funny thing about gold and silver,” writes one of our regulars after the topic came up in yesterday’s mailbag.
“I mentioned to a client the other day that I was in all cash and buying bits of gold and silver. He is a successful businessman and suggested that I can’t eat gold. He also cited Buffett’s ‘there’s no yield’ argument.
“Uhhh, I replied, I bought it for my children. You know the 30–100-year plan. So many people think only in short-term time frames. I have no idea what gold will be worth in 30 years, but it has been around for 5,000 years and has held on well. I figure it will produce about the same in the future. Doubt I can say that about FANG stocks and the yearly fads. I also like my 40-year plan I set up for my children in the 770 account, with the benefits to the future grandchildren.
“Funny, when I started thinking about generational wealth, my investment ideas all changed.”

“If the Federal Reserve raises interest rates next month,” a reader writes, “I will definitely start paying attention to what your resident ‘CIA insider’ has to say.”
The 5: Why wait? Jim Rickards was all alone in late 2014 when he said the Fed wouldn’t raise rates during 2015. Mainstream “experts,” meanwhile, were certain the Fed would pull the trigger in March… whoops, June… er, make that September.
In November, Jim dialed back on his prediction, acknowledging the Fed would destroy any last vestige of its credibility if it didn’t follow through on all its “tough talk” and raise in December. We’ll put his track record up against anybody else’s.
Now, as noted above, Jim is again standing nearly alone in saying the Fed remains committed to raising in March.
Of course, you’re welcome to wait for the outcome of the March Fed meeting. Thing is, Jim’s other, more dire forecast might play out before then.
Best regards,
Dave Gonigam
The 5 Min. Forecast
P.S. Speaking of Jim, have you seen his latest video — shot right in front of the White House? 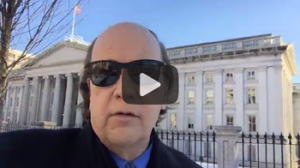 Please view this announcement right now by clicking here or on the play button.
This is an important announcement you need to hear right away. Don’t delay.