“Don’t expect a crisis response in a noncrisis environment,” said Treasury Secretary Jacob Lew this morning.
Mr. Lew is winging his way to Shanghai… where finance ministers and central bankers from the so-called “Group of 20” nations will meet starting Friday.
As our own Jim Rickards reminds us now and then, the G-20 is the closest thing to world government the global elites have got right now. Ever since the 2008 financial crisis, the G-20 is where Big Decisions™ get made.
But not this time, it would seem. In an interview on Bloomberg TV, Lew “downplayed expectations for an emergency response to global market turbulence,” says the Bloomberg website’s thumbnail summary.
“This is not a moment of crisis,” Lew said. “This is a moment where you’ve got real economies doing better than markets think in some cases.”
So there you have it. There’s no crisis to respond to. Repeat: There’s no crisis. Say it loud, say it proud!

And if it’s a sign of impending crisis you’re looking for, you can find it this morning in the U.S. services sector.
For the last six months, while U.S. manufacturing has been in a funk, the no-crisis crowd has assured us everything’s still OK because, well, we don’t manufacture that much anymore.
We’re a services-oriented economy nowadays, they say. As long as Americans keep waitresses and busboys busy by eating out, and as long as they keep buying consumer-y junk delivered by guys driving 18-wheelers, we’ll be fine!
Yeah, not so much. Markit is out this morning with its “flash PMI” indicating the health of the services sector so far in February. As with the manufacturing numbers, 50 is the dividing line between expansion and contraction. The number is 49.8 — way off the “expert consensus” among dozens of economists polled by Bloomberg, whose average guess was 53.7.
It’s the lowest reading since the “partial government shutdown” in October 2013. Econoday’s summary of the report says it “could be a chilling indication of trouble ahead.”

But wait, there’s more! The no-crisis crowd also likes to point to the health of the housing market.
This morning, however, the Commerce Department said sales of new homes tumbled 9.2% from December to January. This too was way off the “expert consensus.” Sales in the West look especially weak, down 32%.
Builders are slashing prices to clear inventory; the median price for new construction is down 4.5% from a year ago, to $278,000.

“The bear will soon be arriving in earnest, marauding through the canyons of Wall Street while red in tooth and claw,” David Stockman wrote this week in his Contra Corner e-letter.
“Our monetary central planners, of course, will once again — for the third time this century — be utterly shocked and unprepared. That’s because they have spent the better part of two decades deforming, distorting, denuding and destroying what were once serviceably free financial markets.”
Sure, they can pump up stock prices for a while. But they get tied up in the delusion of the “wealth effect” — the idea that people will see their portfolios growing and decide to go buy a new car with 0% financing.
“According to these pettifoggers,” says David, “production, income and profits catch up with the levitated prices of financial assets. Accordingly, there are no bubbles; and, instead, societal wealth continues to rise happily ever after.
“Not exactly. Central bank-stimulated financial asset bubbles crash. Every time.”

And this time, David believes the crash will be accelerated by the biggest Wall Street “innovation” of the 21st century — the exchange-traded fund.
“During the 2000 dot-com crash,” says David, “ETFs barely existed and were immaterial to the broad market. The net asset value of the few dozen ETFs at the end of 1999, in fact, was just $60 billion.
“But as shown below, they have been on a frantic growth trajectory ever since. By the end of 2014, there were 1,364 ETFs with a net asset value of $1.8 trillion. And by mid-2015 peak (not shown), this value had grown to $2.1 trillion. 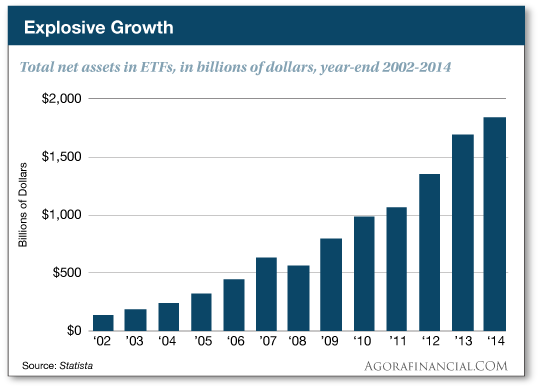 “This means that ETFs were 35 times larger than during the dot-com bust and 3.5 times larger than on the eve of the September 2008 meltdown.”
And David’s convinced it will end in tears — for reasons we’ve laid out over the last week.
We won’t rehash those reasons today. We’ll merely remind you David is leading a live online workshop tonight at 7:00 p.m. EST. He’ll show you not only how to steer clear of the coming carnage; he’ll identify a way you could seize on the panic to quadruple your money by July.
We’ll also remind you of David’s stellar track record since he teamed up with Agora Financial last fall. The average closed position grew 88% in 67 days. That includes one play exploiting early cracks in the ETF sector for a 54% gain only two weeks.
Again, David’s hosting this event tonight at 7:00 p.m. EST. It won’t cost you a thing to look in. Just RSVP at this link with your email address and we’ll save you a spot.

“Junk bond prices are falling rapidly — especially in the junkiest bonds rated CCC or below,” says Dan Amoss of our macro research unit. He works closely with both David Stockman and Jim Rickards.
For more than a year now, Jim has warned of stresses in junk bonds. Emerging-market firms racked up $9 trillion in dollar-denominated debt, expecting the dollar would stay weak forever. (It didn’t.) Energy companies, meanwhile, accumulated $5 trillion in debt, expecting oil would stay at $80–110 forever. (This morning, it’s $32.12.)
Result — a spike in the “BofA Merrill Lynch U.S. High Yield CCC or Below Option-Adjusted Spread.”
Yes, it’s a mouthful, but the movement of the chart since Jim’s warning in January 2015 conveys the basic idea… 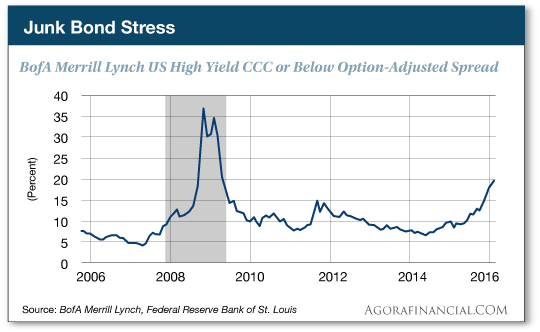 “The move over the past year,” says Dan, “is eerily similar to the one that occurred in the months leading up to the 2008 financial crisis.
“These bearish trends in the corporate bond market will have two key impacts:

Until the war on cash goes nuclear, sales of home safes are likely to soar.
Or so it occurs to us seeing the fallout from the Japanese central bank’s move last month to resort to negative interest rates.
Ordinary Japanese understandably don’t want to pay a fee to park their cash at a bank… so they’re parking it at home. The Wall Street Journal says sales of safes at the hardware chain Shimachu have doubled from this time a year ago.
Heh… Of course, the idea of negative rates is to get people to spend their money, not to hoard it in a different location. That’s in part what’s fueling the growing chatter among the elites about banning cash, or at least banning larger denominations. But at least for now, that’s a bridge too far for the Bank of Japan.
Jim Rickards believes the Fed won’t resort to negative rates in the United States until they exhaust other possibilities first. But we figured this morning it wasn’t too early to start scouting out makers of home safes as an investment theme.
Unfortunately, neither of the two big U.S. names — the ones that make safes people buy at big-box stores like Home Depot — is accessible. Sentry maker John D. Brush and Co. is privately held. And First Alert is but one division in the consumer products giant Jarden Corp. (JAH). Hey, we tried…

“Ah, yes — replacing gold with yak dung (personally, I would prefer musk ox dung, but then there is no accounting for taste, is there?).”
So reads the first of several replies we got to the fellow yesterday who cited his business-school professor back in the day saying gold might as well be replaced by white yak dung as a medium of exchange.
“It may have been G.K. Chesterton,” today’s reader goes on, “that said there was nothing so stupid but that some ivory tower prof somewhere didn’t believe it. Enter our yak dung advocate.
“Here’s the issue, which even a first-year economic student should get: Is yak dung fungible? That is, is one piece of yak dung precisely equal to another (or does one perhaps have a little more lichen in it, making it different? Is it easily divisible?
“It’s the same reason we don’t use cows or wheat as money — if I want to trade cows for wheat, maybe mine is sick; maybe it’s 2 pounds lighter than another… and one bushel of wheat I get from farmer X has a lot more chaff, while farmer Y’s wheat is moldy. And none of this stuff stores.
“I spent eight years at university listening to professors full of themselves, who had never worked a day in the real world, bloviate their Keynesian, rhinestone communist and Fabian socialist economic ignorance.  Our dear Professor Yak would have done a lot better service to mankind being a plumber or driving a FedEx truck, rather than promulgating his nonsense among the ‘Yes we can/Yes we have no bananas’ chanters.
“I may not be the sharpest gazelle in the herd, but even I could figure this one out in a half second’s worth of reflection.”

“If you prefer to hold quality stocks and bonds, that’s great,” says another reply. “It’s part of a sound asset allocation.
“But it’s completely digital, subject to continued attacks by a long list of folks who wish us harm.
“If you don’t also own hard assets, including some precious metals, I think you are whistling past the graveyard.
“Heck, even our own Fed wishes us harm with negative interest rates. In that bizarre world, gold actually appears to pay interest relative to cash and some bonds.
“I don’t hold gold because I hope it goes to $10,000 per ounce. I hold it because I fear it will.”
The 5: Well said, sir…
Best regards,
Dave Gonigam
The 5 Min. Forecast
P.S. We just got a glowing testimonial from a reader of David Stockman’s Bubble Finance Trader…
“I read The Great Deformation and believe [David Stockman] is one of the few sane people on the planet… [He] is the only person I know who really understands money, economics, debt and banking. I trust him, and it has paid off for me. Highly recommend. I’m a little guy with no debt, and these profits are a big deal for me:

“Thank you, David.”
This is your final reminder: David is leading a live online event tonight at 7:00 p.m. EST in which he’ll make his case that the most popular investment of the 21st century is on the verge of imploding. If you want to seize on the opportunity to make up to 300% by this coming July, you owe it to yourself to look in on David’s workshop tonight.
Participation is FREE. We won’t send you another email reminder this afternoon… so if you want to sign up for access, now’s your last chance.