The Elites Are Worried

But… but… they told us there was no crisis!
When we left you yesterday, Treasury Secretary Jacob Lew was throwing cold water on the notion that finance ministers and central bankers from the G-20 nations would produce an “emergency response” to the turmoil in global markets when they meet in Shanghai starting tomorrow.
“Don’t expect a crisis response in a noncrisis environment,” were his words.

Heh… “The global economy needs bold multilateral actions to boost growth and contain risk,” says a briefing note from the International Monetary Fund issued in advance of the G-20 meeting.
OK, those aren’t exactly hair-on-fire words. But even by the IMF’s restrained standards, we detect a few follicles getting singed.
The note said global economic growth is already falling short of 2016 forecasts. Emerging markets are a mess. Oil producers in developing countries are short on cash. “These developments point to higher risks of a derailed recovery,” says the IMF, “at a moment when the global economy is highly vulnerable to adverse shocks.”

“We are currently in a highly precarious environment for global growth and asset markets after two–three years of relative calm,” says a research note from Citigroup. Not that they’re piling on or anything…
“Should the U.S. economy falter,” Citi says, “it would be difficult to identify any major economy that could be the growth engine for the world in the near term.”
This is scarier than they’re letting on. After all, the big banks are always the last to know and the last to act. Back in the early days of the 2007–09 crisis, Citi’s then-CEO Chuck Prince famously refused to pull in his deal-making horns: “As long as the music is playing, you’ve got to get up and dance.” Sixteen months later, Citi was insolvent — even after a $25 billion federal bailout.

“The third bubble collapse of this century is imminent,” says our own David Stockman — who has no patience for the word-mincing of Citi and the IMF.
“That’s because both the global and domestic economies are cooling rapidly, meaning that recession is just around the corner.”
Manufacturing’s been in trouble for months. Yesterday, we took note of a sudden slump in services and housing. Now check out an indicator of the job market that belies the sunny numbers we get on the first Friday of the month from the Bureau of Labor Statistics.
The chart below shows the IRS’ inflation-adjusted collections of payroll withholding. “The nation’s 16 million employers,” says David, “send payroll tax withholding monies to the IRS based on actual labor hours utilized — and without regard for phantom jobs embedded in such BLS fantasies as birth/death adjustments and seasonal adjustments.”
This real-world job indicator has been moving steadily down since November. 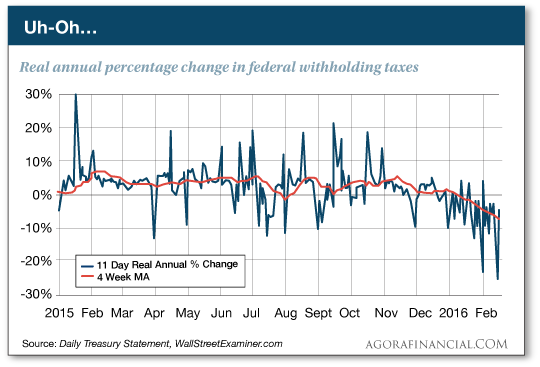 “So there will be carnage in the casino when it becomes evident that recession has again visited this fair land,” says David, “but that the Fed is utterly out of dry powder.”
But unlike in the dot-com crash of 2000… and Panic of 2008… there’s a new accelerant. If you’ve read us anytime in the past week, you know it’s the exchange-traded fund. The total net assets of all ETFs have exploded fourfold since 2008.
Last night, during a live event David hosted from his place in Aspen, Colorado, he explained how ETFs will function as a “doomsday loop” during the next market meltdown. He also explained how you can act now and transform this turmoil into a 300% gain by this July.
If you missed this event, we’re making the replay available to you for the next 24 hours. We urge you to give it a look. Since David partnered with Agora Financial last fall, he’s been showing readers like you how to seize on skittish markets for big gains:

Again, we’re leaving the replay of David’s event online for the next 24 hours. You can watch it right here.

To the markets today… which are treading water.
Stocks reversed their big slump after we went to virtual press yesterday. Now traders are “digesting” those gains, as the saying goes. The S&P 500 is up a hair at 1,930.
Treasuries and gold also reversed their gains late in the day… but some of those losses have been recovered as we write. At last check, a 10-year T-note yields 1.71%, and the bid on the Midas metal is $1,241.
Crude continues to gyrate but also continues to hold the line on $31.
The big economic number of the day is durable goods orders, and it was good — up 4.9% in January. Even if you exclude aircraft, which makes the number volatile, there’s a 1.8% bump. But with weak exports and U.S. consumers turning tightwad, the report might well be a one-off…

How Not to Reduce Your National Debt, Egyptian Edition: Egypt’s President Abdel Fattah el-Sisi gave a long speech on TV yesterday, in part addressing the national debt.
Egypt’s budget deficit topped 10% of GDP last year — not unlike America’s around 2009 or so. Sisi urged his countrymen to donate one pound to debt reduction every morning — that’s about 13 cents.
So committed is he to the cause of debt reduction that “I swear to God almighty,” he said, “if I could be sold, I would sell myself.”
Naturally ,some wag on eBay sought to oblige. “For sale: field marshal, philosopher with a military background in good shape.” 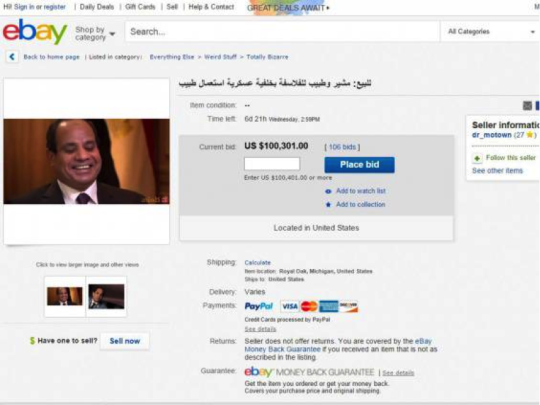 As you can see, bidding topped $100,000 before the page was taken down.
The “auction” was the work of an Egyptian living in the United States named Ahmed Ghanem.
Given Sisi’s propensity for oppression — mass arrests, mass killings, torture — we hope Mr. Ghanem doesn’t have any relatives back home…

“About investing in safe makers,” a reader follows up from yesterday’s episode, “Liberty Safes is a U.S. company owned by Compass Diversified Holdings (CODI). Recommended by your income letter — pays a good dividend too.”
The 5: True enough. But the key word there is “diversified.” It owns a stake in a little bit of everything. We were looking for more of a “pure play” on safes, so CODI has the same problem as First Alert maker Jarden.

“Saudi Arabia’s pissing off the world,” a reader writes of the kingdom’s refusal to cut oil production.
“I wonder how the princes are so sure the Russians won’t invade and level the country in three days and just sit on it.”
The 5: That would start World War III, guaranteed. U.S. relations with the princes are rocky right now, for sure, but Washington has been more or less sworn to the kingdom’s defense ever since FDR paid a call on King Ibn Saud in 1945.
Putin wouldn’t be that reckless. Although some of his hard-line advisers scheming for his job might be. When Putin went on Russian TV last week to announce the Syrian “cease-fire” he brokered with John Kerry, he looked mighty nervous. Just sayin’…

“I am amazed,” writes a reader on the gold-versus-white-yak-dung debate, “that so many can’t seem to grasp that a (the?) major use of gold and silver is nothing more than repositories for purchasing power. Yes, both have other uses, but a place to store purchasing power has been the principal use throughout history.
“Jewelry, art, numismatics and other collectables are other uses for gold and silver, but these are highly dependent on personal taste and amount of disposable purchasing power available for nonessentials. Rarity and beauty are only whimsical repositories of purchasing power, limited by the relatively miniscule markets for them. They also compete with a broad range of other collectibles, such as Howdy Doody puppets, Super Bowl apparel, commemorative plates, Elvis poop and the like.
“Alternative stores of purchasing power, such as the U.S. dollar, compete with silver and gold. As the amount of purchasing power of the dollar decreases, as measured by the price of stuff in dollars, silver and gold repositories have historically increased in the amount of purchasing power. A decent loaf of bread is $2.50 (USD), so dollars are acceptable. But what happens when that same loaf goes to $30 (think it can’t happen? So did Canada) or $100? Then silver and gold become more desirable, and their purchasing power stays the same or increases.
“Start pricing goods in silver or gold (silver is easier) instead of currency. Start the day with the dollar price of a gram or ounce of silver. When you are in a store, convert the dollar price to fractions of a gram or ounce of silver.
“If you are unable to do this math, then you don’t need to worry about anything other than which bridge you want to sleep under in the future.”

“I hold Gold,” writes another, “because it is Proven, Solid & i hold it in My Own Hand & other Men & Women will want something they can hold in their hand.. TO GO EXCHANGE FOR SOMETHING TO EAT..(or feed to their White Yak to get more dung…)
“Truly Free Markets are the ONLY hope for Real Men & Women.”
The 5: Hmmm… Yaks mostly get by on grasses/forage, but Jim Rickards says quality land is an excellent store of wealth, along with gold!
Best regards,
Dave Gonigam
The 5 Min. Forecast
P.S. For the sake of your retirement… we urge you to watch the replay of David Stockman’s workshop last night. He laid out a compelling case for how ETFs will act as gasoline on the fire of the next market shock… and how you can turn matters to your advantage, potentially quadrupling your money in a single play by this July.
We’ll leave the archived webcast available for viewing in the next 24 hours. Here’s where to watch.