Another year, another failed audit for Uncle Sam. Funny, you haven’t heard any of the presidential candidates talk about it, either.
Since 1997, the Government Accountability Office has audited the federal government. Or tried to, anyway. It never works out: Try as the auditors might to come up with an opinion on the government’s consolidated financial statements, the numbers are just too murky.
This year, there were “issues with the Department of Defense’s finances, the government’s inability to account for some transactions and the government’s ineffective report-preparing process,” as described by the Beltway-insider publication The Hill.

“In simple terms, more than a third of your government is a black hole,” sum up Pam and Russ Martens at their Wall Street on Parade website.
The GAO said it was unable to effectively audit “34% of the federal government’s reported assets as of Sept. 30, 2015, and approximately 19% of the federal government’s reported net cost for fiscal year 2015.”
In fact, the number of agencies whose bookkeeping is backsliding is growing. Nearly every Cabinet department got a “clean” opinion in 2014… but in 2015, Defense, Agriculture and Housing and Urban Development couldn’t pass muster.

The Pentagon is a special case. It’s been a bookkeeping disaster for at least 20 years.
Back in 1990, Congress passed a law requiring all federal agencies to be audited annually; the Pentagon was required to comply by 1996. It blew the deadline and has remained in violation ever since.
Said Defense Secretary Donald Rumsfeld the day before the Sept. 11 attacks, “According to some estimates, we cannot track $2.3 trillion in transactions.” By the end of 2013, that number had swelled to $8.5 trillion, dating back to the 1996 deadline.
In 2009, Congress passed yet another law setting a new deadline for the Pentagon to be audit-ready — 2017. Next year. But there were no “or else” consequences attached to this deadline.
As it is, the Pentagon has no fewer than 2,100 accounting systems spread across the armed services and various agencies. Few of them are capable of talking to each other. New systems were canceled — often after $1 billion or more was spent on each.

If you’ve ever had anything to do with an audit in the private sector, you know “material weakness” is a term you do not want to encounter. If you do, you move with all deliberate speed to resolve it ASAP so the auditors don’t start wondering if you’re another Enron or WorldCom in the making.

But this is the federal government we’re talking about. So the presidential candidates don’t feel compelled to talk about it. One-third of the government is a “black hole”? Business as usual.
Even the candidate who touts his private-sector prowess isn’t talking about it. Asked last week during a debate what he’d do to reduce the budget deficit, Donald Trump replied, “Waste, fraud and abuse all over the place. Waste, fraud and abuse.”
Seriously, dude? That’s what every politician says when he or she doesn’t want to get specific about spending cuts or tax increases. The government has lots bigger problems than “waste, fraud and abuse” when trillions in transactions have no paper or electronic trail…
[Ed. note: There’s still another accounting disaster that lurks in the back of our minds and keeps us up at night. By Jim Rickards’ reckoning, it’s 525 times bigger than Enron… big enough to tank your retirement. If you’re not up to speed yet, you need to act before the news goes mainstream. Get the details and an action plan right here.]

To the markets… where stocks are in rally mode either because the economy is getting worse or getting better.
“Weak manufacturing data globally raised hopes of a further easing of monetary policies,” says Reuters.
Well, yes. It being the first of the month, we’re getting a fix on the state of the world’s factories. With all of these numbers, 50 is the dividing line — higher numbers indicate manufacturing is growing; lower than 50 and it’s shrinking. 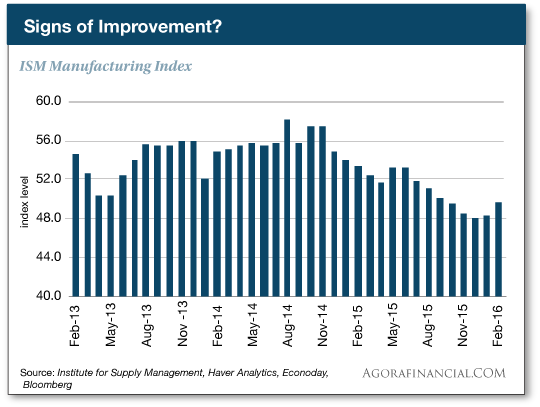 CNBC is quoting some Wall Street flunky as saying the ISM number “adds another piece of evidence we’re not falling into recession anytime soon” and that’s why the market is rallying… even as Reuters attributes the rally to weak numbers globally and the prospect of more monetary stimulus.
We love the establishment media; what would we do without such an endless source of entertainment?

Let’s just tackle the numbers without attaching a value judgment…

The naiveté is almost touching — Apple is looking to Congress for protection from the FBI.
Apple’s top lawyer testifies this afternoon before the House Intelligence Committee about the FBI’s attempts to coerce Apple to rewrite its code so the feds can more easily retrieve the encrypted data from an iPhone.
“The decisions should be made by you and your colleagues as representatives of the people, rather than through a warrant request based on a 220-year-old statute,” say the prepared remarks from Apple general counsel Bruce Sewell.
You really want to go there, Mr. Sewell? You really want to put it in the hands of Congress?
“The tech company’s odds may be hindered due to a strategic choice that stretches back years,” writes Brian Fung at The Washington Post. Apple spent “only” $4.5 million on lobbying in 2015… and that’s way up from the Steve Jobs years.
Microsoft learned its lesson two decades ago. It too didn’t expend much effort greasing palms in Washington… until the Justice Department hit it with an antitrust suit.
Nowadays, Microsoft’s lobbying budget is nearly double that of Apple’s. Facebook’s is even higher. And Google spent $17 million on lobbying last year — nearly four times as much as Apple.
So much for the high road…

Question: Since when does publishing exchange rates online amount to “cyberterrorism”?
Answer: When the exchange rate is the black-market rate between the Venezuelan bolivar and the U.S. dollar.
In 2010, when our favorite Latin American caudillo Hugo Chavez was still alive, three Venezuelan exiles launched a website called DolarToday. It tracks the real-world exchange rate across the Venezuelan border in Cúcuta, Colombia — as opposed to the bogus officially controlled rate.
The Venezuelan government started blocking the site in 2013… and last year it went so far as to sue in Delaware, where the website is registered.
The suit — prepared for the Venezuelan central bank by the D.C. law firm of Squire Patton Boggs — claims the defendants “conspired to use a form of cyberterrorism to wreak, and in fact they have wreaked, economic and reputational harm on the central bank by impeding its ability to manage the republic’s economy and foreign exchange system.”
The defendants say the suit is harassment, pure and simple. “We’re worried, because the Venezuelan government knows that we haven’t done anything wrong,” says a fellow who used a pseudonym when interviewed by The Miami Herald. “They’re hoping that through a lawsuit, and the process of discovery, that they can identify our collaborators and shut down our operations in Venezuela.”
Little wonder: Based on black-market exchange rates, Professor Steve Hanke at Johns Hopkins University estimates Venezuela’s inflation is now running 449% a year.

“Interesting situation re the Apple operating code,” a reader writes. “Undoubtedly, the FBI wants to get data from the terrorist iPhones… I understand that (and agree). On the other hand, we’re ALL concerned about governmental overreach, and if we’re not concerned, we should be.
“I can’t believe that the creative minds at the bureau and the super-nerds at Apple couldn’t get together in a SCIF — sensitive compartmented information facility — and work out the coding issues yet keep it hush-hush. Thereafter, we just snuff the participants ‘to maintain security.’ (Just kidding.)
“Alternatively, the bureau could drive to Fort Meade/Langley and let the crypto folks at NSA/CIA work the decoding issues. As it is, having the FBI go to Apple hat in hand sort of suggests our cyberspooks can’t handle the challenge. Thank God the bad guys haven’t figured that out yet.
“(Then again, maybe they’ve already unlocked the phone but found nothing particularly useful… so now they need to cover their tracks. All the while, we need to keep the terrorists thinking their iPhones are so secure that even the FBI/NSA/CIA can’t get in. Interesting possibilities.)”
The 5: “I’ll be honest with you, I think that there is a reasonably good chance that there is nothing of any value on the phone,” said the San Bernardino police chief to NPR last week.

“Ha, enjoyed the comments on American versus Canadian beer!” a reader writes.
“Here’s a story from my late dad: Back in the days when there was no free trade and one could not buy American beer in Canada (and vice versa), a rich American played golf at a nice course in New Brunswick, Canada. He made it to the 19th hole, planted himself on a bar seat and shouted out to the bartender, ‘Gimme a Budweiser!’
“The bartender said, ‘Sorry, sir, we don’t sell American beer here.’
“‘All right,’ came the response, ‘gimme the closest thing you got to one.’
“Silently, the bartender slid a glass of water across the bar to him.
“He, he, he! Sorry, folks south of the border. Don’t now be building a wall between us!”

“Most beer in Canada is not pasteurized,” another reader chimes in.
“I have tried comparison tasting between U.S. and Canadian beers but have always had trouble remembering which was which the next morning! I do find that U.S. beer is weaker and sweeter than Canadian beer, and that might explain the taste difference.
“Prices in Canada for products using readily available ingredients like wheat flour, milk and eggs have not gone up much,” the reader adds by way of an update on food prices north of the border.
“So bread, potatoes, meat, etc., have not increased in price much. However, fresh vegetable prices have gone through the roof (cauliflower at $8.00 each = four cauliflowers per barrel of oil). One editorial cartoon in a local paper had oil drill workers dancing and celebrating around an oil drill rig whilst announcing that they had found cauliflowers!”
The 5: Guess you had to be there…
Best regards,
Dave Gonigam
The 5 Min. Forecast
P.S. The ex-CIA officer you’re about to meet isn’t a criminal — but it’s very likely he’s hated in the intelligence industry.
Why? Because he’s literally passing out thousands of books — for FREE — detailing what he learned in his six years at the CIA. Like how to bribe a police officer. And 101 other spy secrets.
Click here to grab yours today.