Oy… Here we go again with the “guaranteed retirement accounts.” Or as some people label them, “401(k) confiscation.”
“The Plan That Could Render Your 401(k) Obsolete,” says a headline at the CBS News website.
Ordinarily, we’d pay it no nevermind. But it’s an election year, and it’s possible one or more candidates will warm up to the idea. So we’d better investigate…

Near as we can tell, the idea first got traction during the 2008 presidential election. Your editor wrote about it at the time for The Daily Reckoning website and has been following the proposal’s trajectory ever since.
In October of that year — as the Panic of ’08 had vaporized $2 trillion from Americans’ 401(k) and pension plans — the House Education and Labor Committee briefly considered excluding “high-income” earners from making tax-deferred 401(k) contributions.
“With respect to the 401(k), it appears to be a plan that is not really well devised for the changes in the market,” said committee chairman Rep. George Miller (D-California).
Then he revealed what the idea was really about: “We’ve invested $80 billion into subsidizing this activity” — meaning to his mind the government had “lost” $80 billion in revenue it would have collected were it not for this high-income giveaway.

In any discussion of this idea, it usually begins with Teresa Ghilarducci. 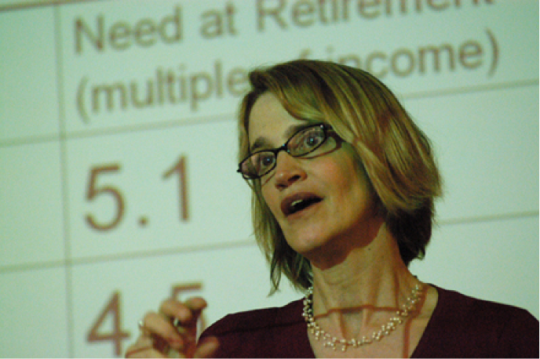 Clearly, she’s run the numbers… but do they add up? [Photo from The New School]

Ms. Ghilarducci is a left-leaning economist at The New School university in New York. She was the star witness at that 2008 House hearing.
At the time, zeroing out the tax advantages of 401(k)s for “the wealthy” was only one part of a two-part plan. The second part was a “guaranteed retirement account.” Everyone would be forced to contribute 5% of his or her income to these GRAs — which would invest entirely in government bonds and theoretically return an inflation-adjusted 3% a year.
The notion never got out of committee. Congress was too busy at the time passing other awful ideas like the bank bailouts.

But bad public policy ideas never die: They just get gussied up in new clothes. And if they can get Wall Street’s blessing, so much the better.
Thus, Ms. Ghilarducci is flogging GRAs in 2016 — this time in a new white paper prepared with Hamilton “Tony” James, president of Blackstone Group (BX) — the $17.6 billion strong asset manager.
Hmmm…
We spent a good chunk of yesterday afternoon poring over the 32-page report. The 2016 model of the GRA proposal differs significantly from the 2008 model. In some ways, it’s more draconian… and in others, it’s more delusional.
For one thing, the 401(k) would effectively cease to exist… because no one could take advantage of the tax breaks that come with them, no matter their income. Those tax breaks would be phased out.

It’s the changes to the GRA concept, however, that most caught our eye.
The 5% forced contribution of 2008 has been lowered to 3% in 2016. More significantly, your “contributions” would not be placed exclusively into government bonds. Instead, your money would be placed in the hands of, for lack of a better term, financial professionals.
Essentially, Ghilarducci and James think your 401(k) money should be managed like the money in public pension funds. On Page 18 of their report, there’s a chart touting the expected rate of return from the biggest public pensions. As you can see, most of them expect to earn 7–8% a year. We reproduce the chart here, verbatim… 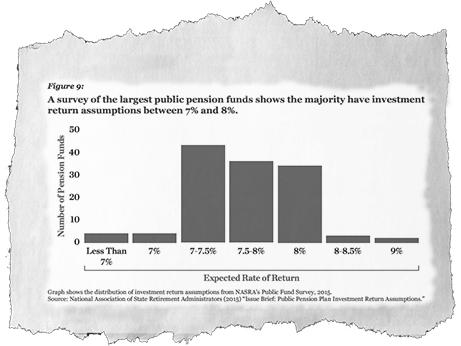 Back in 2010, when we were musing over the financial health of public pension funds, we called this “the 8% illusion.”
Note the bar on the right of the following chart: Fund managers assume that because they got an average 8% annual return over the last 25 years, they’ll do likewise over the next 25. 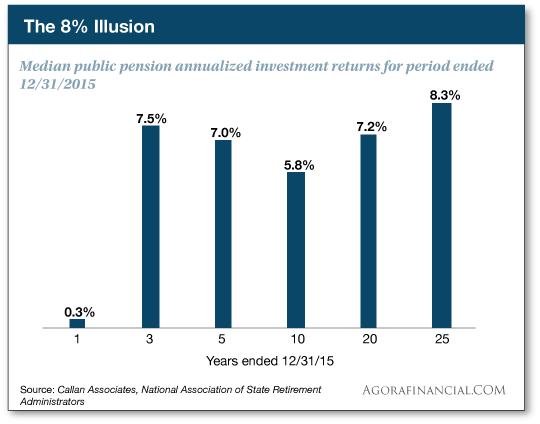 Never mind your time horizon to retirement might be something less than 25 years. Never mind the stock market has gone nowhere for the last two years. There’s no compelling reason for it to go up the next two, and it might go down significantly. Never mind interest rates remain mired at historic lows, which destroys the returns from the bond investments in these pension plans.
In recent years, public pension funds tried to juice their returns by piling into hedge funds and private equity.
Often, the hedgies underperformed a basic S&P 500 index fund. Many pension funds are now bailing — CalPERS, the giant system in California, divested its $4 billion hedge fund portfolio in 2014.
How to make up the difference? That same year, California voters were confronted with 140 local proposals to raise taxes — many of them to help maintain the lifestyle to which retired CalPERS beneficiaries had become accustomed.

And it’s this rickety foundation on which the “guaranteed retirement account” is supposed to, well, guarantee your retirement.
Ghilarducci and James, perhaps sensing not all is well in the public pension world, scaled back the projected annual returns of the GRA from the 8% illusion to “around 6–7%.” And in the event the market goes south, “the government will guarantee that each person retiring has earned at least a 2% return on their savings at retirement,” they write. How comforting.
To be clear, none of this has been written into legislation. Yet. But it being an election year, we figure we owe you a warning.
And now that Ghilarducci has gotten a Wall Street bigwig on board, you can expect serious lobbying power behind the idea that wasn’t there in 2008. (The Q&A in the white paper even has a section addressing, “Is this plan a way to get more money for Wall Street to manage?” Heaven forfend!)
In the meantime, if you have $20,000 in capital and you’re looking for a way to collect reliable income, we direct you to what we call the “ultimate retirement loophole.” Readers of Income on Demand had a chance only this morning to pocket an instant $270. Learn how easy and lucrative this system can be when you click here.

To the markets… where the major U.S. stock indexes are all in the red. The Dow is holding up best, whilst the small-cap Russell 2008 is taking it on the chin. The S&P 500, which held the line on the 2,000 level yesterday, has been pushed back as we write to 1,989.
Hot money is flowing into bonds, pushing yields down; a 10-year Treasury yields 1.82% at last check. Gold is holding steady at $1,264.
If there’s any “news” making traders jittery, it’s more bad news from China — exports in February plunging 25% from a year earlier.
“And it’s not a strong renminbi causing the weakness,” says EverBank’s Chuck Butler in today’s Daily Pfennig. “It’s the general slowdown of China’s trade partners. With the major partners being the eurozone, Japan, and the U.S. all in an economic funk.”

Speaking of an economic funk, small-business owners are feeling their gloomiest in two years, judging by the monthly Optimism Index from the National Federation of Independent Business.
The number tumbled to 92.9 in February. Only two months earlier, it was 95.2. “Owners are very pessimistic about business conditions in the coming months,” says NFIB chief economist Bill Dunkelberg, “and spending and hiring plans have softened.”

“I sense a wicked relief rally brewing in biotech,” says Greg Guenthner of our trading desk.
“The biotech sector jumped more than 2% Monday, after quietly inching higher for weeks. Here’s how it all went down: 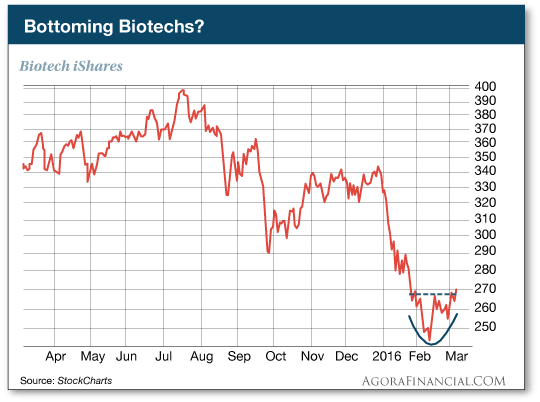 “Biotech first got a nice little ramp off the February lows. But it wasn’t as quick to jump to new two- and four-week highs as many other comeback sectors,” Greg goes on. “In fact, it’s still stuck near its January lows. But yesterday’s breakout could change all that.
“Now that the Biotech iShares have worked their way above the February lows, it’s time for a snapback rally!”

“Biotech continues to bounce back from its February bottom,” concurs Ray Blanco of our science-and-wealth team.
“Even so, the selling from early this year has kept many names exceptionally cheap when compared with the potential values of their pipelines.”
Ray’s keeping an eye on one right now as a potential pick for FDA Trader. “It’s developing therapies for huge markets that currently aren’t being well served. For many patients, the only curative therapy is organ transplant. This company is sitting on a biotech gold mine that could unlock billions in yearly sales.”

“Short of loading up a containership with assorted safes and heading to Tokyo, is there any other way to play the situation in Japan?” a reader inquires.
The 5: Absolutely. Jim Rickards’ Currency Wars Alert laid on a trade in early February only days after the Bank of Japan moved to negative interest rates.
At the moment, it’s in the red. But as with most of these recommendations, there’s ample time for the thesis to play out — in this case, January of next year. So it’s still a buy — and a better bargain now.
For access to Currency Wars Alert — including a new and urgent message from Jim Rickards — look here.

“Good show, Mr. Bloom. Nailed it,” writes a reader after yesterday’s episode — in which we shared a 2013 YouTube video that’s going viral now for reasons we still haven’t figured out.
“Love the video and the host of others by this central bank hater,” writes another. “It’s amazing what he can say so pointedly in two minutes!”

“Nonsense,” a reader writes after our musings about Uber and the like during yesterday’s mailbag. We described how a $25 taxi ride that cost only $10 via Uber amounts to another $15 we could spend on dinner out.
“The nonsense of this sort of government-style logic,” he goes on, “is that the $15 that my standard of living has improved by is at the expense of the transportation sector, which loses that same $15 to the benefit of the food services industry. It’s a zero-sum game.
“And therein lies the stupidity of using GDP as an indicator of a healthy economy. I can take a pile of Jell-O and move if from one side of the plate to the other all day long, but it’s still the same pile of Jell-O.”
The 5: Well, amen about GDP. But to call it zero-sum is oversimplifying. Uber has found a way to muscle in on the government-protected taxi cartel, to the benefit of millions.
That’s “creative destruction” at its finest — even if it doesn’t amount to new wealth created by growing, mining or manufacturing something…
Best regards,
Dave Gonigam
The 5 Min. Forecast
P.S. Have you heard about the strange website that lets you invest in little-known $25 investment notes that pay interest rates as high as 28.99%? If you buy enough of them, you could collect thousands every month.
Mark F. has already collected an extraordinary $53,539 over six months. Carl P. collected an incredible $67,419 over 14 months. And Isadore P. collected an unheard-of $226,080 over just four months.
They simply logged into a strange website and started on the path to collecting that income. Click here and find out how to access this website.