“Economic Derailment” Within a Week

The global elites are dialing up their warnings about the dicey state of the global economy.
“We are clearly at a delicate juncture, where risk of economic derailment has grown,” said David Lipton yesterday. Mr. Lipton is “first deputy managing director” at the International Monetary Fund — the outfit Jim Rickards says will ride to the rescue during the next global financial crisis.
Lipton turned up here last week on Jim’s graphical matrix of the world’s elites. He’s an acolyte of Robert Rubin, the ex-Goldman Sachs CEO and Treasury secretary. And Jim says Lipton exercises even more power than IMF managing director Christine Lagarde “because the United States has a veto over all important actions by the IMF.” 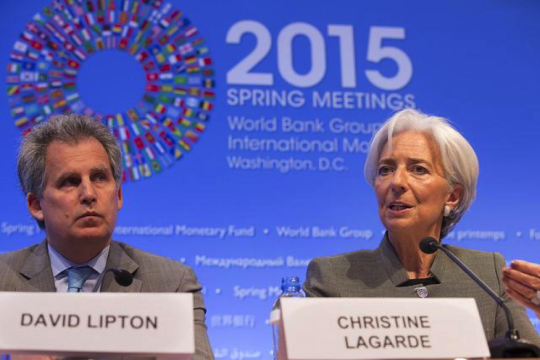 “She can talk all she wants… but who runs the show?” [IMF photo]

As we mentioned here in real-time, the IMF called on leaders of the G-20 nations less than two weeks ago to take “bold multilateral actions to boost growth and contain risk.”
Yesterday during a speech in Washington at the National Association for Business Economics, Lipton turned it up a notch — although he was careful to stay within the bounds of the elites’ measured language that never betrays the sentiment, “OMG, WE’RE IN DEEP $***!”
Specifically, he said, “The downside risks are clearly much more pronounced than before, and the case for more forceful and concerted policy action has become more compelling.”

The risk of “economic derailment” will go up measurably starting tomorrow morning… and continuing through next Wednesday afternoon.
“Fortunes will be made or lost in seven days based on the actions of just two individuals,” says Jim Rickards.
Tomorrow, the European Central Bank, led by Mario Draghi, will decide whether to make negative interest rates even more negative. And a week from today, the Federal Reserve led by Janet Yellen will decide whether to make barely positive interest rates a little more positive still.
“If Draghi and Yellen have a definite view of where they want to take monetary policy,” says Jim, “they will certainly be able to convince enough of the fellow governors and committee members to go along.

“The problem now,” says Jim, “is that there is no definite view.”
Uh-oh…
“Central bankers are making things up as they go along. The truth is they’re just as confused as you are about what to do and what the impact of their policies will be.”
Double uh-oh…
“The economic signals are mixed, the policy choices are uncertain and both Draghi and Yellen will probably go right down to the wire before making up their minds.”
Triple uh-oh…
“If these decisions vary from market expectations, they could cause meltdowns for equities, rallies for bonds and wild swings in currency cross rates.”

There are four possible outcomes between now and a week from today.
“The way to deal with close calls,” says Jim, “is to use scenario analysis to cover all the bases and make sure we’re not blindsided. This is what we do at the CIA and other branches of the intelligence community. Let’s go through the scenarios:

“Our Intelligence Triggers indicators are showing some close calls among these four scenarios,” Jim says.
Under the circumstances, Jim says it’s best to pursue a strategy that will keep you covered no matter what happens.
“If Draghi or Yellen eases, that means they are worried about deflation,” Jim explains. “Conversely, if Draghi or Yellen tightens (because of misplaced inflation fears), that will simply accelerate the recessionary forces gathering on both sides of the Atlantic.”
With that backdrop, Jim’s indicators have triggered a new “Kissinger Cross” trade that stands to benefit no matter what. It has up to 500% profit potential over the next six months.
The recommendation is brand-new; it came out only yesterday. But Draghi makes his big call tomorrow. So if you want to learn more about the Kissinger Cross strategy, follow this link now… because time is of the essence.

To the markets… where rising crude is propelling stocks upward.

At last check, a barrel of West Texas Intermediate is only 11 cents away from the $38 level — territory last seen more than two months ago.
With that, the S&P 500 has recovered some of yesterday’s smackdown; it sits around where it did when we wrote you yesterday, at 1,990. Instead, it’s gold’s turn to get whacked; the bid at last check was $1,253. Ditto for Treasuries; the 10-year yield is now a hair shy of 1.88%.

The drip, drip, drip of bad news from the banking sector is still on track to turn into a flood.
Shares of Citi got whacked 3.7% yesterday when the CFO forecast that first-quarter revenue in Citi’s investment banking division would likely be down 25% from a year ago. Revenues from stock and bond trading are set to fall 15%.
In an ordinary year, the first quarter is a good time for business, with investors adjusting their annual strategies at the start of the year. But not 2016. “You’re not getting much of the bounce that you would expect to see at this time of year,” bank analyst Marty Mosby from Vining Sparks tells the Financial Times.

Citi’s statement tiptoed around losses from loans it made to the energy sector — loans that made sense when oil was over $100 a barrel.
A month ago today, Jim Rickards said in this space that the major banks have been busily covering up those losses — in the same way they covered up their housing-related losses a decade ago.
But the “extend and pretend” games can’t go on forever. A handful of portfolio managers are already writing down their bad loans. Many more will follow… and likely all at once. The drips become a flood.
That’s how it worked with the housing crash in 2007–08. “Once one bank came clean,” Jim explained, “the others had to write down assets too. The bank Ponzi scheme crashed catastrophically all at once. This is because regulators and auditors force the banks to write down all their positions once one bank sells any assets at the lower price.”
Earnings season for the big banks is just a month away now. Two of the six biggest — Citi and Morgan Stanley — are down more than 20% in the last year. Jim’s convinced there’s far more pain coming. Here too his “Kissinger Cross” method triggered a trade one month ago. It’s an even better buy now than it was then. You can expect at least 100% upside by this fall, and possibly much more.
You’re not taking advantage of “Kissinger Cross” trades yet? Here’s another opportunity.

“For your ‘new taxes and weird fees file,’” begins today’s mailbag: “FEMA is now considering a ‘disaster deductible’ that the local government would have to pony up before FEMA would open the federal faucets.
“Before long, we may be asked to pay to cast our mostly pointless votes. I say ‘mostly,’ as for many there is still some intrinsic value attached to thinking your vote matters.
“You guys do seem to have a remarkably accurate crystal ball when it comes to seeing into the hearts and minds of the bureaucrats and elites that rule us. Love The 5!”

“If these GRAs are so great,” a reader writes after our expose of “guaranteed retirement accounts” yesterday, “why don’t we just divert the money currently paid into Social Security — put it in GRAs?
“We can start with 3–5% and leave the other part to pay the benefits as we phase out SSI.
“Then I can take what I currently put in my 401(k) and invest it in an account I could tap to retire, early instead of getting hit with a penalty for early withdrawal.
“Of course, the plan will be an utter failure — and where will the government get the guaranteed 2%?”

“I smell envy of the insurance industry by the Wall Street vultures!” writes another reader on the same subject.
“I can anticipate ‘subsidized’ GRAs for those without, a penalty for those who decline, and if I hear ‘If you like your pension plan, you can keep it!’ I’m getting out of the casino, er, I mean off the finance grid!”
The 5: Those were details our 5 Mins. didn’t allow for yesterday. But you nailed it. It’s right there in the Ghilarducci-James white paper.
“It is mandatory,” they write — “but cost-neutral for almost all below-median-income employees. The plan creates a $600 tax credit for every worker who contributes to their guaranteed retirement account (GRA). This means that households earning up to $40,000 per year will have their yearly retirement savings fully reimbursed.”
There’s no penalty only because the forced 3% “contributions” would be taken straight out of your paycheck.
Which raises another interesting detail: Those contributions would be split between employee and employer. “For most employers,” says the paper, “this 1.5% contribution would be largely offset by no longer having to administer or contribute to other retirement plans.”
So you can expect a large swath of Corporate America to climb aboard the GRA train along with Wall Street!
Finally, the paper points to Australia’s “superannuation” program as a model to follow. There is, however, a critical difference.
“Super” in Australia allows you, if you wish, to invest your funds as you choose. You’re not stuck with the default options… and the default options are seriously wanting, says our old friend and colleague Dan Denning, who spent the better part of a decade stationed Down Under.
“If you don’t actively manage you own super,” he explained to us in 2013, “you’re overexposed to stocks as an asset class and growth as a sector. That worked like a treat here up until 2007. It probably won’t work very well for a long time.”
There’s nothing in the GRA white paper about a self-directed option — just the promise of a 2% guaranteed return if the market takes a spill.
We’re sure that promise would prove just as solid as the one about Social Security benefits never being subject to income tax…
Best regards,
Dave Gonigam
The 5 Min. Forecast
P.S. “Momentous decisions from the two most powerful central bankers in the world are coming in a matter of days,” says Jim Rickards — circling back to where we began today’s episode.
“With this much uncertainty in the air in such a short period of time, what’s the best move for you?”
Jim’s “Kissinger Cross” method has identified that very move. “You’re covered in every scenario,” he says. And you stand to make as much as six times your money come September.
For access to all of Jim’s Kissinger Cross trades, look here.