An “Adult” Episode of The 5 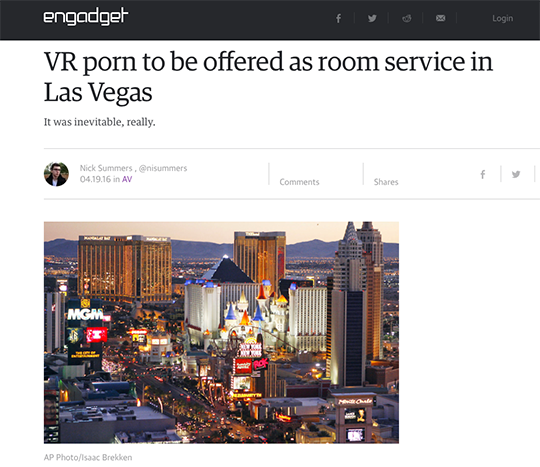 But the growth of VR technology has the potential to dwarf all those other success stories. And you can still get in near the ground floor. As we’ve pointed out before, VR was a $37 million industry barely a year ago. By 2020, it could be a $30 billion business.
To help illustrate the profit potential, Ray’s put together an updated version of his introduction to VR — with a few new details drawing on the porn example. Thus, this version is a bit, uhh, spicier than the original.
No, there’s nothing graphic about it. But if someone else is in the room with you right now, they might wonder what the heck it is you’re looking at.
With that disclaimer out of the way, we encourage you to click here.

Both stocks and bonds are rallying early on this hump day.
[You didn’t think we’d get through this episode of The 5 without one cheap double-entendre, did you?]
The Dow is in the green just enough to surpass 18,100 as we write. And the S&P has added four points to yesterday’s over-2,100 close. Meanwhile, Treasury prices are rallying and rates are headed back down; the 10-year note is back to 1.77%.
The lone economic number of note today is existing home sales — up 5.1% in March, which was better than expected. And it was single-family homes leading the way.
Gold and crude are holding their own, the Midas metal at $1,253 and West Texas Intermediate at $41.25.

Seven years after Jim Rickards took part in the Pentagon’s first “financial war game,” truth is becoming stranger than war gaming.
In Jim’s first book, Currency Wars, he describes a 2009 exercise in which the Russians and Chinese teamed up on a new gold-backed currency that muscled aside the U.S. dollar as the globe’s main reserve currency.
That’s prologue for a story yesterday at the website of the Kremlin-funded TV channel RT: “The Bank of Russia and the People’s Bank of China want to create a joint platform that would unite gold trading by the world’s two biggest gold-buying countries.”
Not only are they the two biggest gold buyers, but together they make up a quarter of global gold production. And officially anyway, their gold reserves are fifth and sixth in the world. (Much of China’s holdings are off the books.)
“In China, the gold trade is conducted in Shanghai; in Russia, it is in Moscow,” says Sergey Shvetsov, first deputy governor of the Russian central bank. “Our idea is to create a link between the two cities in order to increase trade between the two markets.”

The infrastructure for such a link just took a big step forward, with a yuan-denominated gold price benchmark — just like the “London fix” of the last century or so.
The vehicle is a twice-daily auction carried out on the Shanghai Gold Exchange, involving 18 banks. Yesterday was the first day. We noticed the story getting some play on China’s state-run English language network, CCTV News… 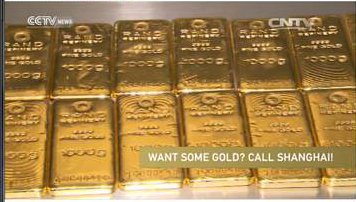 “The launch could eventually reduce the influence of the London gold price, which started in 1919 when bankers at N M Rothschild & Sons in London sat down to calculate a fair price for gold,” says the Financial Times. “That became the global gold benchmark, used by miners, central banks, jewelers and the financial industry to trade gold bars.”

“Obama will no longer be either useful or relevant to the Gulf states,” says the pro-Saudi Arabian newspaper Al-Hayat.
Well, that’s quite the greeting the president’s getting in Riyadh for a summit with Saudi Arabia’s King Salman and the other monarchs from the Gulf Cooperation Council. O the indignities of being a lame duck.
We wonder what the president’s advisers are telling him about the news that the kingdom is taking out a $10 billion loan from a group of global banks — “its first international debt issuance in 25 years,” the Financial Times tells us. Seems the princes need money they’re no longer getting by selling oil north of $100 a barrel.

We know this much: The president is bringing news that will come as a relief to King Salman.
Sen. Lindsey Graham (R-South Carolina) has moved to block his own bill that would allow Sept. 11 families and survivors to sue the Saudi government. The president won’t even have to carry out his threat of a veto.
As we mentioned on Monday, the bill has bipartisan support. But Graham’s gotten cold feet. “I want to make sure that anything we do doesn’t come to bite us,” he says. Graham has come under the spell of opponents who argue that the bill would open up the United States government to lawsuits by foreigners.
Or maybe he’s taking seriously the Saudi princes’ empty bluster about unloading $750 billion in U.S. Treasuries and other assets should the bill become law — even though “the threat has rung hollow in Washington because it would probably hurt the Saudis more than the U.S.,” says The Daily Beast.
Bottom line: The kingdom’s $10 billion loan will stave off the inevitable devaluation of the Saudi riyal. By how long, we can’t say. But it’s only a stopgap. We remain on alert for the ultimate stab in the back by Washington’s supposed “ally.”

Done deal: Alexander Hamilton, the original American crony capitalist, stays on the $10 bill. By the time this episode of The 5 hits your inbox, Treasury Secretary Jacob Lew will have made the announcement.
We suggested as much last week: Lew was having second thoughts about plans to put a woman on the $10. The power elite loves ’em their Hamilton — the Founder who, God help us, wanted the Constitution to give the president a life term and veto authority over state legislation.
As we go to virtual press, we understand Harriet Tubman, of underground railroad fame, will grace the $20, replacing Andrew Jackson. We won’t cry “PC” around here. Why should government types monopolize the paper currency? Tubman undeniably did good (while breaking the law, no less!), and the Trail of Tears was a monstrous act.
Then again, the one indisputably good thing Jackson did was huge. As president in 1832, he vetoed a bill re-chartering the Second Bank of the United States. The nation was spared the scourge of central banking for the next 81 years.
No wonder Lew and company were so eager to get Old Hickory’s mug off the $20.

“”Let me press the ‘How do I sell gold high?’ question a bit,” begins today’s mailbag.
“Let me start by presenting some general observations that I believe are true:
“A) Since, for a practical matter, I can’t use physical gold while I own it, the way I can a car or house, I have to sell gold for its value to be received.
“B) If, due to a currency collapse, gold has run up to some ‘parabolic high,’ from which I think it will soon fall to some much lower price, the logical thing to do is sell right then… not later.
“C) Selling at a perceived, rather momentary ‘high’ does not give anyone a lot of time to complete the transaction.
“D) Willing buyers, either dealers or private parties at a ‘gold is high in dollar price’ moment are not likely to have anywhere near the amount of cash needed to buy even a relatively few ounces of gold with payment in cash.
“E) Receiving and depositing large checks in personal checking accounts is likely to trigger unwanted attention from a variety of government agencies.
“F) Bartering for cars, boats, fine art and real estate takes time, which, in this case, is particularly unhelpful.
“G) Keeping gold forever might be a good way to provide intergenerational value to one’s offspring… but it won’t give someone the digital cash in their checking account right then that may be needed for more immediate needs.
“All said, I am getting the not-so-funny feeling that in a ‘currency collapse and gold temporarily goes to the moon’ scenario, physical gold will be like a genie locked up in a bottle, with no practical, realistic way out. Help me out, please. What am I missing here?”
The 5: Great questions. I’ve noodled over them myself now and then.
As Jim Rickards sees it, gold would not temporarily go to the moon. It would be revalued somewhere in the neighborhood of $10,000 an ounce — using the math he spells out in The New Case for Gold — to restore confidence in the system.
So you don’t have to worry about “getting out at the right time.” Gold is fundamentally about wealth preservation. If it’s day-to-day transacting, you’re better off with silver. Jim likes the U.S. Mint’s “Monster Box” of 500 Silver Eagles.
At today’s spot price of $17.09 an ounce, that’s a bullion value of $8,545. “Maybe they’ll be worth more in extreme circumstances,” he said in an interview with us awhile back.
“Maybe if it’s just deflation, the purchasing power will go up, and if you want to go out on your bicycle and get groceries or farm-fresh produce for your family in a disruptive situation, I’d rather have a silver coin than a gold coin.
“Because a gold coin is probably a year’s worth of groceries, the silver coin might be a week’s worth of groceries or a couple days worth of groceries.”
But in a truly extreme scenario, you’d want to take your cue from families of old that have hung onto wealth across many generations: If you have to bug out, “gold can be gathered up and stuffed in a saddlebag,” says Jim, “or sewn into the lining of a coat and moved.”
Best regards,
Dave Gonigam
The 5 Min. Forecast
P.S. What, you didn’t click to see that 11-second “NSFW” video clip linked above?
You’re either easily offended or you must not care about your chance to claim a piece of an industry that’s on the verge of generating $30 billion a year.
If you don’t fall into either camp, you owe it to yourself to check out the clip now.