When Slower Sales Are a Good Thing 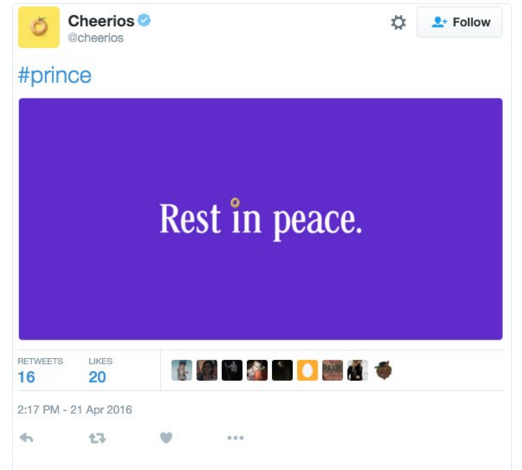 See… That’s a little Cheerio dotting the i, in a rather self-serving tribute to Prince. To the surprise of no one except General Mills’ public-relations folk, the Twittersphere did not react kindly.
“As a Minnesota brand, Cheerios wanted to acknowledge the loss of a musical legend in our hometown,” Cheerios “brand spokesman” Mike Siemienas tells Huffington Post. “But we quickly decided that we didn’t want the tweet to be misinterpreted, and removed it out of respect for Prince and those mourning.”
Heh… “misinterpreted.”
Then there was Wolf Blitzer on CNN. “All of us, of course, remember ‘Purple Haze’ and what that did for the world of music.”

We know a lot of musicians have died this year, and it’s hard to keep ’em all straight… but c’mon, Jimi Hendrix died in 1970.
Granted there are more important reasons only 6% of Americans in a recent poll say they have “a great deal of confidence” in the media — about the same as Congress — but incidents like this don’t exactly restore that confidence, do they?

Growth projections for a hot new line of business have just been slashed… and contrary to what you might think, it’s great news.
Remember all the trouble we’re having ordering our Oculus Rift virtual-reality headset here at Agora Financial headquarters? Oculus underestimated demand for its product, and it’s also run into parts shortages. It’s not alone; the Chinese electronics giant HTC is having payment-processing issues with its Vive headset.
Thus the research firm SuperData has cut its 2016 sales forecast for VR hardware and software by 22%… to $2.9 billion.
“There is a significant gap in the ability to fulfill consumer demand due to parts shortages and unforeseen popularity,” says the report. Another intriguing stat: More than 13 million Americans want to buy a VR headset this year, but only 7.2 million will ship.

If Oculus and HTC are the Hares of the VR sector, maybe Sony will prove to be the Tortoise.
“In the race for virtual-reality dominance,” says Popular Science, “Sony’s PlayStation is about to win a critical lap: In October 2016, its VR headset will be the first tied to a video game console. That’s important because the PS VR, as it’s known, can take advantage of the 36 million PS4 consoles already in homes across the planet.”
Hmmm… A PlayStation VR paired with PlayStation 4 will set you back $750. Pair an Oculus Rift with the sort of high-end computer that can make the most of its capabilities and you’re looking at a nearly $1,600 outlay.
But again… Sony won’t be on the market with its products till October.
Just think of all that pent-up demand. Little wonder SuperData still thinks VR will be a $22.9 billion business by 2019. Not bad for what was only a $37 million business last year. That’s still 61,700% growth potential.
And it’s still early days, because the most-touted application right now is porn — in the same way the adult entertainment biz led the way two decades ago with streaming video and online payment systems.
Ray Blanco’s lusty presentation on the topic has gotten a lot of eyeballs since we rolled it out on Wednesday. We encourage you to look past the 11-second video clip and keep your eye on the 61,700% growth potential. Well, to the best of your ability, anyway. It’s all at this link.

The major U.S. indexes are adding onto yesterday’s losses as the week approaches its end. At last check, the Dow was down a third of a percent, with 18,000 receding further into the rearview; ditto the S&P 500’s retreat from 2,100.
Earnings season thus far is shaping up as poorly as David Stockman anticipated in our virtual pages on Tuesday… 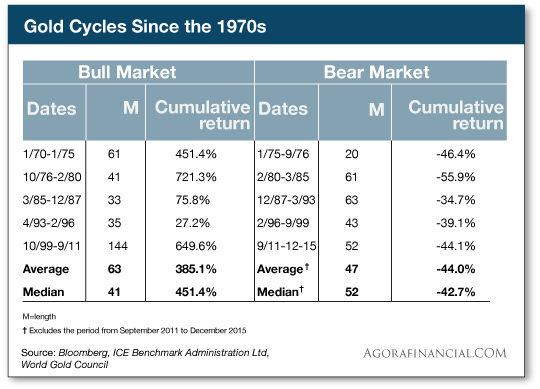 “If we assume that the gold bear actually did end in December 2015, when prices started increasing, that would put that bear market at 52 months and a 44% decline. Those numbers are both nearly right on what we have historically experienced.”
And if a new gold bull is underway?
“A bull run that equals the median of the past five (451%),” Jody concludes, “would see gold prices up around $4,500 per ounce in the next three or four years.”

In the interest of examining evidence that contradicts our editors’ forecasts, we’re compelled to note the Japanese yen has registered its biggest drop against the dollar since March 1.
It takes 111.42 yen to equal $1 today — a drop of nearly 2% compared with yesterday. The move coincides with a Bloomberg report that says the Bank of Japan might help financial institutions by offering them a negative rate on some loans — offsetting the negative rates those institutions are stuck with on their excess reserves held at the BoJ.
We take note because of Jim Rickards’ “Shanghai Accord” thesis. Jim believes that when G-20 leaders met in Shanghai two months ago, they agreed on a scheme to help devalue the Chinese yuan without touching off another stock market panic in the United States. The trick is to devalue the dollar against the yen and the euro; because the yuan is more or less pegged to the dollar, the yuan would fall in sympathy with the dollar.
On the one hand, the Bloomberg story is the first meaningful evidence in nearly two months that contradicts Jim’s thesis. On the other hand, it’s still just a rumor, attributed by Bloomberg to anonymous sources who probably have an agenda.
For all we know, that agenda is to grab quick profits or cut losses if the yen takes a one-day dive. Shocking!

Meanwhile, the latest moves from the European Central Bank buttress the Shanghai Accord thesis.
The ECB left interest rates unchanged yesterday. “If the ECB had cut rates or increased QE,” Jim tells us, “it would have weakened the euro and run counter to our thesis. Instead, by leaving rates unchanged, the ECB put a prop under the euro and strengthened the thesis.”
His conclusion: “The Shanghai Accord is alive and well and has great predictive power as a forecasting tool. We’ll be using this for months, and possibly years, ahead to guide our thinking.
“It can lead us to great profit-making opportunities that are either currency related or involve stocks and bonds that rise or fall based on currency moves.” If you want to come along for the ride, here’s where you can jump on board.

“Thanks for giving my son Dan McCall some press in The 5 this week,” writes a proud dad — who we had no idea till now was an Agora Financial subscriber.
“With his victory over Comrade Bernie (Sanders), this brings it to three in a row for his lawyer, Paul Levy, in defending our First Amendment rights.
“As you may know, Dan and Paul brought suit against the NSA several years back for this shirt… 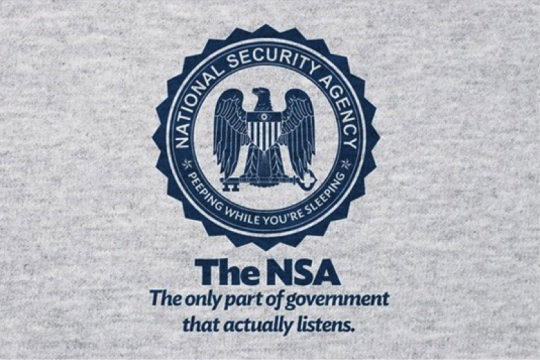 “They also beat back Hillary’s super PAC. This week is getting even more crazy with the help of The 5!”
The 5: We’d forgotten about the NSA one. The NSA tried to argue the T-shirt violated the 1959 National Security Agency Act, which supposedly governs misuse of the agency’s logo. The battle went on for nearly three years, but the NSA ultimately backed down.
By the way, we recently ran across a novel argument that the NSA’s mere existence is illegal, courtesy of John Kiriakou — an ex-CIA officer who the Obama administration threw in prison for whistleblowing.
“The NSA was created in 1952 by presidential executive order,” he wrote in a recent piece for Reader Supported News. “[President] Truman made the new National Security Agency subordinate to the secretary of Defense…
“The problem with that is there is a federal law that prohibits the military from having any role in domestic policy” — meaning the Posse Comitatus Act of 1878.
Of course, given the military’s role in the war on drugs going back the last three decades, it’s going to be hard getting that genie back in the bottle…

“So the FBI paid $1 million to hack the San Bernardino iPhone,” a reader refers to the news of the week.
“The thought that came to me was not about the FBI or the cost. Instead, my mind headed to NYC.
“Specifically, I wonder if all the tech-centered media reporters, who repeatedly stoke the ‘We need security on our devices’ message yet subscribe to the ‘liberal’ side of the spectrum, realize they actually paid to hack their own secured iPhones?
“Or has the fact that the FBI is funded by their tax ‘contributions’ completely slipped their collective minds?
“I’m a fairly new reader – about six months. But y’all have become one of my go-to info sources.
Keep up the great work!”
The 5: A million dollars just to make a point. The San Bernardino police chief said in February he doubted there’d be anything useful on that phone.
Why would there be? The gunman destroyed two personal phones and hid a hard drive. But he’d leave everything on his work-issued iPhone for the authorities to find?
Ah, but the FBI justifies the expense by saying it was hugely significant that there were no communications with other ISIS supporters on that phone. “The FBI views that information as valuable to the probe, possibilities it couldn’t discount without getting into the phone.”
Whatever makes you feel good, guys…

“Your item yesterday about the Teamster pension cut back is just one more piece of evidence that shows this administration is waging a war against senior citizens,” a reader writes.
“I think it is strange that no one has recognized it or is willing to call a spade a spade when it is so damn obvious.”

“Central States Pension Fund has already knocked down the amount of money my husband should receive when he retires in 2021,” writes a reader.
[Ah, yes, we didn’t mention that. Future retirees are already hosed…]
“It has been cut from about $1,800 per month to $976 per month. We figured with that and our Social Security, we should have about $3,800 per month for living expenses. We decided recently to try to count on half of that now.
“Not sure now that we should even count on $1,900. We’re seriously checking out parts of Panama now, where we think we might be able to live on $1,500 per month somewhat comfortably. Love The 5!”

“Something that gets missed a lot when talking about Andrew Jackson is that he paid the national debt down to zero,” writes our final correspondent in light of all the paper-currency shuffling the Treasury announced this week.
“My wife and I read The 5 every day and really enjoy it but — just kidding.”
The 5: True. The crowd that considers the national debt a “national blessing” (Alexander Hamilton’s words) loves to point out there was a depression the year after that happened, but that’s another story for another time…
Have a good weekend,
Dave Gonigam
The 5 Min. Forecast
P.S. A small army of researchers, led by Jim Rickards, recently discovered something shocking…
And one tiny action from you today could make you a fortune while almost everyone else gets burned by the coming war.
Will you join the growing number of prepared Americans? Or will you allow your savings to be wiped out by the peril that’s unfolding?
Click here to learn how you can protect yourself.