“The fringe has become the mainstream,” honks economist Jesse Hurwitz of Barclays Capital in New Yawk.
The “fringe” in this case being the cranks and crazies always hollering for a return to the gold standard. This Hurwitz fellow thinks it’s a bad idea. So do most mainstream economists. But he admits it’s “something we’ll increasingly talk about.”
How right you are, sir!

Jim Rickards threw gasoline on that fire with the publication of his latest book, The New Case for Gold. And now Jim’s predicting $10,000 gold.
But along the way, he sees four short-term forces driving the gold price. In no particular order:

Factor #1: Gold Supply/Demand. “Central banks have moved from being net sellers of gold to net buyers for the first time in decades,” says Jim. “China, Russia, Iran and other countries continue to demand gold to diversify their reserves away from dollars.” Meanwhile, official gold sales by the West have ceased, Jim adds.

Factor #3: Falling Dollar. “Easy monetary policies by central banks cause the price of gold to rise. As the Federal Reserve backs off their plan to raise interest rates here in the U.S., the dollar has been falling in value relative to other major currencies like the euro and Japanese yen. As the dollar becomes weaker, the dollar price of gold rises.”
Here Jim hints at the “Shanghai Accord” he says the G-4’s central bankers secretly ginned up at their February meeting in the “Paris of the Orient.” It calls for a cheaper dollar and yuan at the expense of the euro and yen. Official sources deny it even occurred.
Its unstated goal, per Jim: a backdoor devaluation of the yuan to give the floundering Chinese economy a boost. Backdoor, because an open devaluation could be catastrophic. Markets plunged last August and this January when China unexpectedly devalued. Another might capsize the ship. So it’s devaluation on the sly.
And finally, but by no means last, what else affects gold prices in the short term?

Factor #4: Gold Manipulation. “Gold manipulation can be done by market players like hedge funds, COMEX operators and other players using ETFs and leasing and unallocated contracts. These manipulations do exist and can influence the price of gold in the short term.”
So there’s no need for any tinfoil hat here — gold manipulation is real. But it’ll fail in the end, says Jim: “Ultimately, the macro forces driving gold to $10,000 will overpower the manipulators. But until then, the price of gold will move, in part, because of manipulators’ actions.”
For further details, please see Jim’s new book, The New Case for Gold. Specifically, read Chapter 4, “Gold Is Constant.” If you don’t have a copy, click here. It’s free, minus shipping and handling. You’ll also get a free trial subscription to Rickards’ Strategic Intelligence in the bargain.
[Nota bene: With gold heading to ten grand an ounce, Jim says a once-in-a-decade, light-the-sparklers opportunity has opened up in the gold market. When this window of opportunity has opened in decades past, it was possible to turn every $1 ventured into $192.
But even if Jim’s wrong and gold tops out at $1,500, you’re looking at nearly quadrupling your money.
Jim’s prepared a 48-second video answering the questions “Why now?” and “How much money can you make?” Click here to watch.] 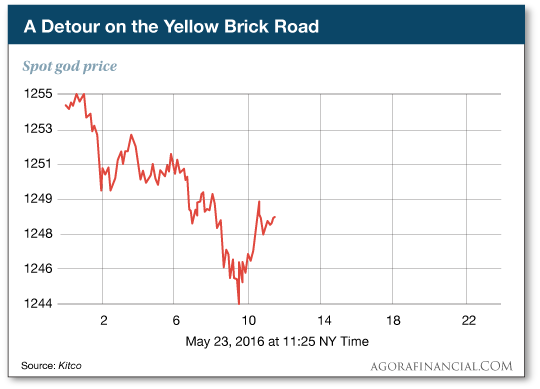 Why? Renewed talk of a rate hike in June or July has frightened the horses.
There’s apparently been “some change in sentiment” at the Fed, said ABN Amro analyst Georgette Boele in Reuters today. “There is now an increased likelihood that they may raise rates in June or July,” he added.
Must be all those new breadwinner jobs the economy added recently…
Meanwhile, chief economic adviser at Allianz, Mohamed A. El-Erian, bleats that a rate hike is definite by September… and probable in July.
Naturally, the dollar firmed on the news. And oil slipped a bit. It’s down 30 cents, to $48.11, this morning on the higher dollar talk.
And the major indexes? Ho-hum. The Dow’s up 15, the S&P’s in neutral and the Nasdaq’s up 14. Like we said, ho-hum.

“Your eye will be fooled into thinking you’re looking through a real window into a real world,” writes Wired co-founder Kevin Kelly. “It’ll be as bright and crisp as what you see out your window,” he adds.
Kelly is referring to new virtual reality (VR) technology from the Florida-based firm Magic Leap. Heavy hitters like Google, JP Morgan and Morgan Stanley have already ponied up $1.4 billion to fund its efforts.
Magic Leap is running its own version of the skunkworks — everything’s top secret. Our own Ray Blanco has tried several times to secure a visit to the company’s facilities, but they’re not “taking media requests” at this time.
But thanks to a recent Wired profile of the company, we’ve gotten a glimpse at what all the hoopla’s about. Take a look: 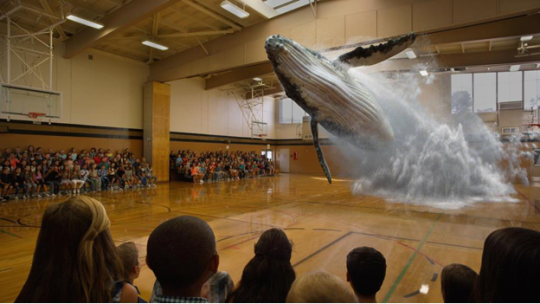 Magic Leap’s breakthrough is actually in what’s termed “mixed reality” (MR). Forbes sums up and quotes Kelly: “The technology instead attempts to integrate virtual sights and sounds into the real-life spaces and moments we occupy, a task that is ‘more difficult to achieve [and] in many ways [the] more powerful of the two,’ Kelly writes.”
Forbes says Magic Leap’s magic bullet is a “very special, very guarded, semitransparent photonic lightfield chip that lets users see distance-adjusted apparitions merrily inhabit the ‘real’ world around them. “The quality of its virtual visions exceeds all others,” jubilates Kelly.
Peter Jackson, The Lord of the Rings director, says MR will be as big as smartphones — or bigger — inside a decade. Now, that’s sayin’ something. We should add that Jackson’s also a Magic Leap board member.
[Experts say virtual reality could be a $30 billion industry by 2020. That’s just four years from now.
In fact, VR could be the biggest tech story since computers or smartphones. And the mega-trend of the decade ahead. It could also make ridiculous fortunes for those who act the fastest. Why not you?
To learn all about it, click here.]

Added benefit of VR? It’ll let you prepare for the zombie apocalypse.
But you need to remember it’s not real…
A young lady who toils for Zooka Creative was testing out a new game called The Brookhaven Experiment, a zombie horror game. But things got a bit too real: 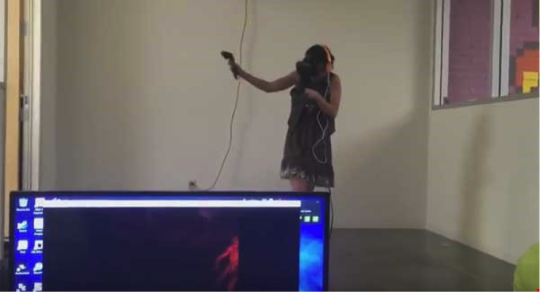 The girl panicked so badly they had to pull the plug. Heh. But at least she’ll know what to expect when the real thing arrives.

“I enjoy reading The 5 Min Forecast,” begins one reader, followed by the inevitable “but.”
“But I have to wonder,” he asks in sarcasm, “would we be better off if the U.S. had stayed out of WWII? After all, wasn’t it our own fault the Japanese attacked us? Shouldn’t we have apologized instead of declaring war? Should we have allowed the Soviets to overrun Western Europe as they did Eastern Europe? They were not attacking the U.S. directly.”
The reader refers to an item in last Wednesday’s 5 about the possibility of nuclear war with Russia. It ignited a debate about America’s role as globocop and if it should be sticking its honker in everyone’s business.

“I love reading The 5,” adds another reader. “But I disagree with comments on NATO.” There’s that “but” again. His main point:
“The reason military alliances exist is to thwart military aggression. The fact that an aggressor knows that there are grave consequences to invasion keeps the world a safer place. Abandon NATO and all hell is going to break loose, because there are some crazy people running Russia, and the best way to thwart domestic discontent (which is seething in Russia) is to wave the nationalism flag and go to war. Abandoning NATO plays right into his hands, and he also has his finger on the nuclear button.”
The 5: Well, that’s the whole point, isn’t it — he has his finger on the nuclear button? He being Putin. We’re not sure poking the Russian bear is such a hot idea, given that elemental fact. Never mind that Ukraine was once part of Russia. And why on Earth would Putin want Europe, anyway? Think he wants to deal with Greece and the French?

I know it sounds like heresy, but not everyone wants to live by U.S. ‘values,’” chimes in a Canadian reader. And thanks for the comment, eh?
He adds, “I’d be very surprised if the U.S. military presence in over a hundred countries around the world were all there at the request or even permission of the local populace.”
The 5: Since when did that matter?

“Russia, China and other central banks are dumping U.S. Treasurys and buying gold,” writes one reader on a different topic.
“Sounds like a smart move, as Jim Rickards warns individuals should be doing likewise. The question is how come we never hear a word about our own central bank purchasing the yellow metal?”
The 5: We never hear about it because it doesn’t happen. It holds about 8,000 metric tons in various locations, but it hasn’t bought any gold in forever and a day.
Regards,
Brian Maher
The 5 Min. Forecast
P.S. Most folks seem to think the coming collapse of the global monetary system will throw the world back into the Stone Age. They think people will go into caves and start eating canned goods. But here’s why they’re shamefully wrong…
Based on the monetary history of the past century, a monetary collapse meant that the major financial and trading powers of the time sat around a table and simply rewrote the “rules of the game.”
It happened in 1922, 1944 and 1971.
Fact is, these “rule changes” happen every 30 years or so. And we’re due.
And the way Jim Rickards sees it, the “new rules” of the game will likely include gold. (That’s because gold has ALWAYS been in the mix.) That’s why he’s issuing an URGENT warning on gold.
To find out his full, NEW thesis on gold — where he thinks prices are headed AND what you can do about it — click here before it’s too late.
P.P.S. Dave is taking a richly deserved break this week, so I’ll be manning the conn. He’ll be back on duty next Tuesday.