And you thought virtual reality was all fun and games… No, it’s being conscripted far more noble purpose. In fact, virtual reality can go so far as to “inspire humanitarian empathy,” according to the United Nations:
“It is one thing to say that you understand someone’s pain and worries, but quite another to experience them. From living in a refugee tent to facing the Ebola epidemic, the United Nations is using virtual reality to create awareness of humanitarian crises around the world in hopes of changing how a person acts toward others.”
Gabo Arora, creative director and special adviser to the U.N.’s Sustainable Development Goals Action Campaign, says, “Virtual reality is the ability to really take part in a story that usually you’re only a passive spectator on. And it’s giving you the possibility to walk in another person’s shoes.”
(Walk in the shoes of an Ebola victim? Thanks, but our own size 12s will do just fine.)
Anyway, this Arora fellow helped direct a virtual reality film about a 12-year-old Syrian girl, Sidra, who lives in a Jordanian refugee camp with 130,000 others. It’s called Clouds Over Sidra. And it could squeeze a pearl of sorrow from the driest eye, no doubt. 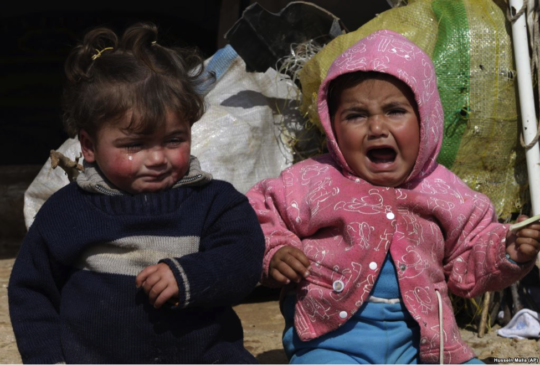 He says viewers emerge from the experience “feeling enlightened and often moved, and often ready to take action.”

But perhaps you think virtual reality is pure hype. All sizzle, no steak. VR will be far more than whiz-bang games and cinema, however. It can change our lives in less dramatic ways that we’d never expect…
Says VR firm InContext Solutions, “Many are still impervious to the effect that VR could have on everyday life, and in that, the hype has not yet caught up to VR’s lasting impact… The fact is virtual reality is uniquely positioned to offer many different industries a new way to work, create and problem-solve.”
The company says industries like education, retail and health care will be able to use VR to create experiences that “exceed expectations.”
For example, The New York Times has gotten in on the VR act. It partnered with Google Cardboard to create a VR app allowing users to explore stories in far greater detail. It claims it allows users to “experience” a story like never before. Certainly more than a paper or 2-D screen would provide. Who would have thought just a few short years ago that the Old Gray Lady would go VR?
VR could also transform education, claims InContext co-founder Tracey Wiedmeyer:
Imagine medical students exploring the body from the inside — getting an up-close understanding of atherosclerosis by floating through ventricles of a virtual reproduction of a patient’s heart. Or elementary school students being transported through history to sit in while the Declaration of Independence is debated and signed. VR can turn education into a real-life Magic School Bus experience.
These same tools could change the way that doctors learn new surgical procedures and architects construct blueprints.
It takes vision to realize VR’s potential, though. And not everyone has it…

But let’s not forget, virtual reality also promises to be a whole lotta fun. How about a virtual trip to Pluto?
Last July, the New Horizons space probe traveled to the dwarf planet for a photo shoot. It revealed of breathtaking images of this stark but spectacular world. 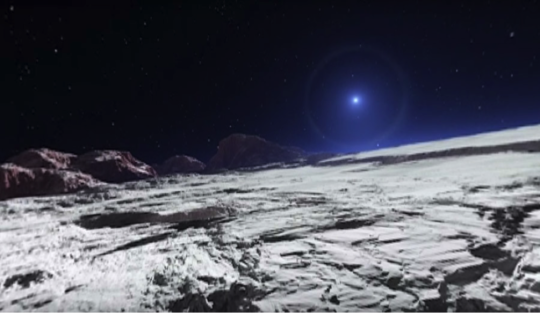 And it is now possible to take a virtual reality tour of Pluto using images captured by the New Horizon. (Could Uranus be next?) “Users will be able to experience what it is like to explore the planet using their smartphone or computer, or in 3-D using a VR headset,” enthuses Universe Today, every reader of which has probably seen each Star Trek episode eight times.
[Ed. note: There’s no way around it — virtual reality’s profit potential is enormous. There’s just no telling how high it can go. Last year, the industry made $37 million. But Investor’s Business Daily said this year, it’ll be worth $2.3 billion.
That’s 6,217% industry sales growth in the last year alone! And a few years from now?
VR could do $30 billion a year.
This party’s just getting started. And today’s your chance to stake your claim to a part of this mountain of new wealth. We know how you can get started.
Click here now to find out how.]

How does the market look today?
Cautiously optimistic. It’s waiting word from Janet Yellen. She’s giving a speech this afternoon, and investors want to see if she telegraphs any clues about a possible rate hike.
The Dow’s up a cool 30 points in the meantime. The S&P’s up 5, and look at that — the Nasdaq’s up 22.
Crude’s off 69 cents, to $48.79. Meanwhile, gold faces the ongoing head winds whipped up by the rate hike talk. It’s down another six bucks today.

Let’s go back to space for a minute. Our tech maven Ray Blanco was in the nation’s capital recently for a satellite trade show. (Jealous?) Industry honchos gathered to discuss the latest doings of the space business.
Ray’s conclusion, based on what he learned: “The space/satellite industry is in the early stages of a transformation. ‘New Space’ companies like SpaceX, Blue Origin, Virgin Galactic and others are privatizing space access — and will eventually lower the cost of getting to space dramatically.”
Lower costs will lead to greater use of launch services. And that’s important, says Ray, because half the cost of a typical satellite placement — $100 million — is launch-related. And it generally takes a full decade between the start of a satellite project and launch.
Greater numbers of launches at lower costs will let the industry respond to market opportunities and incorporate new technologies faster. And Ray says that’ll create opportunities for profit.
He also says it’s happening right now. “The industry is figuring out how to get the most ‘bang for the buck’ from each launch.”
Much of the planet cannot be served by landlines because it’s either too expensive or not feasible. Extending fiber optics to rural locations is cost prohibitive. And for mobile applications beyond the range of cell towers — ships and aircraft — Ray points out that there is simply no alternative to a satellite link.
If you want to make some money in the coming years, it looks like space is the place.

If you like your salt, you can eat it. Nanny mayor Michael Bloomberg started it all by banning trans fats and sodas larger than 16 ounces. Now his replacement, Bill de Blasio, has salt in his sights. 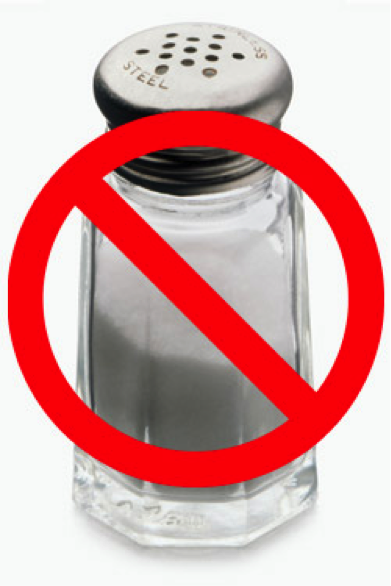 New York City intends to enforce a “first of its kind” requirement that chain restaurants use icons to warn patrons of salty foods. The regulation applies to restaurants and fast-food places with 15 or more outlets nationwide. Why it’s not 14 is beyond our powers of understanding.
City officials say the warnings will help make diners aware of how much sodium they’re scarfing down. Fines for violators can be up to $600.
An appeals court gave it the green light after the National Restaurant Association put up a stink. De Blasio called the appeals court’s decision “a common-sense regulation that will help New Yorkers make better decisions and lead healthier lives.”
Uh-huh.
How many Big Macs haven’t you downed because of the calorie label?
On the topic of inane NYC laws, did you realize it’s illegal to walk in public on a Sunday with an ice cream cone in your pocket? Or that it’s illegal for a woman to appear on the street wearing “body-hugging clothing”?
On that last point, please take this in the spirit in which it is intended, Kim Kardashian: Stay away from New York City!

“I had been thinking the same thing as the gentleman that wrote in about $10,000 gold meaning a $10,000 men’s suit.” The reader refers to the notion that an ounce of gold has historically been roughly equal to the price of a decent men’s suit. It goes back centuries.
“Directionally, I agree that is what will happen if the gold price is repriced and pegged to that new number by the government. Even if you held an aggressive 30% in gold, all of your dollars would be immediately devalued by about eight times. Seems this would more than offset any gains by gold.”
The 5: Jim Rickards has argued that owning physical gold would allow you to keep up with the massive inflation to which you refer but it wouldn’t be enough to get ahead. That’s why he launched Rickards’ Gold Speculator, which lets you leverage gold’s rise through select gold and mining stocks. Those gains could be truly extraordinary as gold advances.
The reader also added a P.S.: “To all the folks complaining about the discussion of gold: You do realize you don’t have to read the parts that don’t interest you, right?”

“If in an inflationary scenario gold shoots up to $10,000 an ounce,” another curious reader echoes the previous, “how high is gold expected to go in a deflationary scenario? And how long can it be expected to stay there? Love yooze guyze.”
The 5: Jim hasn’t offered a specific price, to the best of our knowledge. But he has made the case that gold will still outperform in deflation, since the price of most everything else will fall further. And people in the millions will lose faith in central banks and buy gold, which will drive it higher.
Example: We explained earlier this week how gold, measured by shares of the largest mining company of the day, increased severalfold during the first four years of the Great Depression while the Dow tanked. We love yooze too.

“I do believe the right moves now could make life-changing wealth and provide security through the upcoming crisis,” adds another reader to bring today’s gold discussion to a close. We suspect there’ll be more ahead.
Regards,
Brian Maher
The 5 Min. Forecast
P.S. At 8:00 a.m. on Sunday, April 17, a controversial video quietly appeared online.
It was released with little fanfare, but within a few hours, it had caused a major ruckus on the Web.
Hidden inside this video is a major wealth opportunity the population at large doesn’t know about. But you should. And we think you’ll be positively amazed by what you’re about to see. If you’ve already seen it, please disregard. But if you haven’t, well, you have to see it.
Click here to view it now, while it’s still available.
P.P.S. It’s been a pleasure filling in for Dave this week. But you’ll be delighted to learn that he’ll be back in the saddle on Tuesday.