“I’ll admit I’m confused,” writes an admittedly confused reader.
“A lot of Jim Rickards’ premise for $10,000 gold is based on the global trend toward negative interest rates, and even Janet Yellen recently suggested it was an option that should be examined.
“So how is it that only a couple of weeks later, there’s rampant talk of an interest rate hike, which would strengthen the dollar and thus fly in the face of Mr. Rickards’ ‘Shanghai Accord’ thesis? Is it a political stunt to trash the markets during the summer when the campaign season has yet to begin, only to allow for a ‘rate cut rally’ just before early voting starts?
“You folks always seem to have great insights on such things, so help me reason this out.”

No time like the present. From the Financial Times website this morning: “Stocks, the dollar and short-term Treasury yields are all hovering near multiweek highs as markets appear increasingly at ease with the prospect of a summer rise in U.S. interest rates.”
Gold, meanwhile, hovers near multiweek lows. The salmon-colored rag can barely contain its glee in pointing out the Midas metal is about to turn in its worst monthly performance since November.
Before your editor took a break from The 5 last week, we said Jim Rickards was looking increasingly lonesome in sticking to the Shanghai Accord thesis.
As a refresher, Jim believes during the G-20 summit in Shanghai three months ago, the International Monetary Fund brokered a secret deal: Central banks in Europe and Japan would act to strengthen the euro and yen; the Federal Reserve would act to weaken the dollar. Because the Chinese yuan is pegged to the dollar, the effect would be to weaken the yuan. Result: A yuan devaluation with no announcement by the People’s Bank of China — sparing markets the turmoil wrought by formal devaluations in August 2015 and January 2016.

This morning, Jim stands nearly alone. On Friday, Federal Reserve chairwoman Janet Yellen delivered a speech. “It’s appropriate — and I’ve said this in the past — for the Fed to move gradually and cautiously to increase our overnight rate over time. Probably in the coming months would be appropriate.”
Really specific, huh?
There was zero news in the speech… but the few traders on duty going into a holiday weekend decided it was earthshaking. Thus, the aforementioned multiweek highs, especially in the dollar relative to the euro and yen.

“These trends may persist in the short run, but the Shanghai Accord is not a dead letter,” says Jim — who spent much of last week meeting with bankers and portfolio managers in California.
“The obvious cause of the stronger dollar (and weaker yen, euro and gold) is the Fed’s campaign of hints, leaks and suggestions that they will raise interest rates in June. This puts the ‘divergence trade’ back in play. If the Fed is raising rates while everyone else is cutting or stuck below zero, then global capital will flow into dollars to capture a little more yield. This makes for a stronger dollar and lower dollar prices in everything else.”

Let’s introduce a cheeky, just-for-the-hell-of-it question: What if the Fed doesn’t raise rates at its next meeting on June 15?
It’s hardly a lead-pipe cinch that it will: As we write, traders in futures tied to the fed funds rate are pricing in only a 28% probability of an increase.
Jim sees at least four reasons the Fed will stand pat — weak growth, little inflation, uncertainty over the “Brexit” referendum and the possibility of a U.S. recession going into the general election.
“If the Fed raises expectations of a rate hike and then does not follow through,” says Jim, “the market will interpret this as dovish. All of the recent trends will turn on a dime. The euro, yen and gold will all snap back, and the dollar will resume its decline.”

The key now is to watch China.
With a strengthening dollar this month, the Chinese central bank moved last week to adjust downward the yuan’s peg to the dollar. In other words, a modest devaluation.
“As a result,” says Jim, “capital outflows from China have resumed. Such outflows triggered stock market collapses twice in the past nine months (August 2015 and January 2016). The U.S. market collapse in January happened after the Fed raised rates, not before.
“The Fed is playing with fire. If they persist with the rate hike talk, they risk more Chinese devaluation. If they actually hike rates, they risk a U.S. market meltdown. Markets are fragile right now. Despite the Fed’s tough talk on rates, we expect them not to raise rates in June after all. Markets are calling the Fed’s bluff. Expect the Fed to fold.”
Just imagine what that would do to the gold price. Last week’s $50 tumble could reverse in violent fashion.
But as Jim’s been saying all month, now’s not the time to load up on bullion — even with this latest pullback. If you really want to make the most of gold’s march to $10,000, here’s Jim’s action plan.

Speaking of “little inflation,” the Fed’s favorite measure of inflation was updated just this morning.
“Core PCE” shows inflation running at a 1.6% annual clip. That’s level compared with a month ago. It’s a darn sight higher than it was a year ago. But it’s still nowhere near the Fed’s 2% inflationary target. 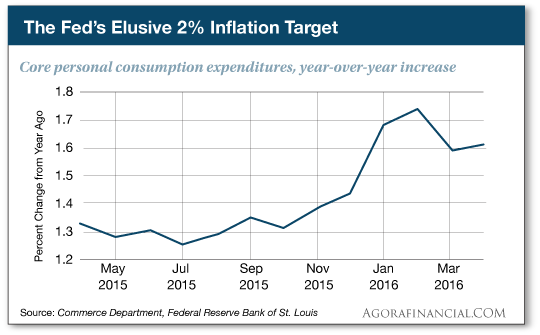 The same Commerce Department report also reveals Americans reversing their tightwad ways of the last couple years. Personal incomes grew 0.4% in April… but consumer spending raced up 1%, the biggest monthly increase since August 2009. Much of that is a function of continued strong auto sales and rising gas prices. Hmmm…
The big economic numbers of the week come on Friday with the job figures — which the mainstream will evaluate only for how they might affect Fed policy and not on trivia such as whether more Americans found work during the month of May. Heh…

Small caps are leading the way on the U.S. stock market as May winds down.
The Russell 2000 Index is up nearly a third of a percent as we write, while the Dow industrials are down about the same. The S&P 500 is nearly flat at 2,097.
Gold is up about $8 at $1,213. Once again, $1,200 is looking like a powerful support level. It’s held consistently since early February.
Crude’s flirtation with the $50 level continues, a barrel of West Texas Intermediate fetching $49.84 as we write.

More signs of (misplaced) consumer confidence: The Case-Shiller home price index jumped 0.9% in March, the best showing since November.
Of the 20 metro areas that make up the index, 19 showed gains, led by the Twin Cities.
With this latest number, the index is now its highest since November 2007 — right before the start of the “Great Recession”… 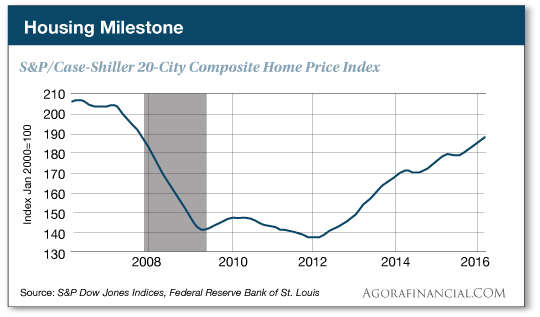 Complain all you want about how housing prices “should” be leveling off, or even falling, but then you’d be passing up easy money.
“Despite all of the talk of the Fed hiking interest rates this year, mortgages are still extremely cheap,” says our income specialist Zach Scheidt. “Naturally, lower interest rates are helping to drive more demand for homes across the U.S.”
Over the past year, Zach’s premium subscribers have had the chance to extract four instant income payments from one of the major homebuilders exploiting this trend. The latest came a week ago today — $248.
For a plain-English explanation of how these payments work — and a dramatic demonstration of how easy they are to collect — check out this “experiment” conducted by our publisher, Joe Schriefer.

Travel tip if you’re flying to India: Check the seat pocket of in front of you for any gold bars.
It’s been two years since we’ve chronicled gold smuggling into India. Apparently, it’s still a thing.
In 2012, we noted the Indian government had imposed a 2% duty on all gold imports. Then it was raised to 4%. Then 6%. And 8%. By late 2013, it was 10%, where it’s remained since, the better to shrink India’s trade deficit and prop up the rupee.
Along the way, we related nutty stories about gold being smuggled into India. Some of the methods were ingenious — building gold capacitors into TV sets. Others were more crude — hiding $1.4 million in gold bars in an airplane toilet.
It’s still going on. From The Times of India: “On Thursday, Directorate of Revenue Intelligence (DRI) officials were tipped off that gold bars would be hidden in places like the pocket for in-flight magazines, seat pockets or the slot for life jackets on the Bangkok-Chennai SpiceJet Flight 96.”
A search turned up 116 troy ounces — worth more than $140,000 at today’s price — stashed in both the front and rear toilets.
No sign of the smugglers, though. Gotta admire the persistence…

“I want to tell you this is the best ad I have ever seen for selling a product,” writes a self-described 84-year-old pharmacist and former drugstore owner.
“Thank you for sending this to me,” writes another reader of the same promotion for our premium income service Income on Demand. “I want so much to be able to sell options… but I haven’t been able to take the time to fully understand the process. I shall take the time to see the email you sent. I have watched the one where the people on the street are amazed at having this money given to them by participating in a trade that takes such a short time. It is a big help, I am sure of that. Thank you again for sending it to me.”
The 5: You’re welcome. Income on Demand editor Zach Scheidt has gone out of his way to make the process as simple as possible. New subscribers get a thorough but easy-to-understand welcome packet including tutorials both in writing and on video.
And if for any reason you decide it’s not for you, there’s a 60-day money-back guarantee. Hard to go wrong.

“Ahoy, Dave,” says one more reader of this sales pitch. “I think you should include the fact that not anyone can do it!
“You must have a well-funded brokerage account. In my mind, it is deceptive not to include that fact in your story.”
The 5: We disclose in the sales message that Zach’s method works best if you have at least $20,000 available to invest. We even mention that periodically here in The 5 before anyone has a chance to click to the promotion — last Thursday, for instance. So yes, it’s a good point to emphasize.
Best regards,
Dave Gonigam
The 5 Min. Forecast
P.S. Zach’s instant-income method is so safe even Warren Buffett relies on it to generate income for Berkshire Hathaway.
For real. Berkshire has reported collecting as much as $7.6 billion in instant income from the markets.
And so can you. See for yourself right now.
P.P.S. Many thanks to Brian Maher for bringing you The 5 in my absence last week.