The Virtual Elephant in the Room

Peak Internet is here. So is Peak Smartphone. High-technology’s salad days are all but over — or so claims this year’s edition of Internet Trends.
Internet Trends was first published in 1995 as The Internet Report by a Morgan Stanley analyst named Mary Meeker. It’s become a tech-industry touchstone over the years. These days, Meeker issues the report from her perch as partner at the venture capital firm Kleiner Perkins Caufield & Byers.
The gloomy highlights are as follows: The number of Internet users worldwide grew 9% over the last year — which is no better than the year before. Adoption of smartphones is likewise stalling out. The technology we take for granted in the West is still out of reach in much of the developing world. Meanwhile, advertisers still don’t have the Web figured out; they continue to spend gobs of money on “legacy” media like TV.
The bright spots are few and far between. Voice interfaces like Apple’s Siri are hot… although they’ve been no help to Apple. Instead, Meeker says the beneficiaries will be Amazon and Google; 20% of Google searches on Android-OS phones are now voice. Longer term, she says the high-tech automobile might revive the U.S. auto industry, mostly benefiting Tesla Motors and (once again) Google.
As it happens, the chairman at Ms. Meeker’s firm holds a spot on Google’s board. No, we’re not asserting a conflict of interest. But we’d be remiss if we didn’t raise an eyebrow.

Conspicuous by its absence in the report — and Meeker’s 213 PowerPoint slides — is any mention of virtual reality.
If you’ve been reading us anytime in the last two months, you might find that omission a little strange considering VR’s growth trajectory.
We can’t tell you why VR makes no appearance in the report. All we can do is reiterate the numbers: A little over a year ago, Business Insider estimated VR was a $37 million industry. Fortune figures it’ll be a $30 billion market by 2020. That’s 81,000% growth. Other estimates are even more ambitious — $150 billion.

But don’t take it from us. “MUSK: We’re Living in Computer Simulation!” says a headline this morning at The Drudge Report.
At the same conference in California where Meeker breezed through her slides yesterday, Elon Musk — the man behind everything from Tesla to SpaceX to SolarCity — made a far-out claim: There’s a high likelihood we’re already living in a computer simulation, Matrix style.
We have no idea what to think about that. But his supporting evidence makes a powerful case for VR investing.
“Forty years ago, we had Pong. Like two rectangles and a dot. That was what games were.
Now, 40 years later, we have photorealistic, 3-D simulations with millions of people playing simultaneously, and it’s getting better every year. Soon we’ll have virtual reality, augmented reality.
“If you assume any rate of improvement at all, then the games will become indistinguishable from reality, even if that rate of advancement drops by a thousand from what it is now.”

Meanwhile, we’re still waiting for the arrival of our Oculus Rift VR headset here at Agora Financial headquarters.
Publisher Joe Schriefer ordered one the first day pre-orders were available — way back on Jan. 6. He knew VR would be the “next big thing” for tech investing, and he wanted folks in the office to experience it hands-on.
Alas, pre-orders were so fast and furious that the original shipping date of March 28 was pushed back to “late June.”
Last night, Joe got the following update… 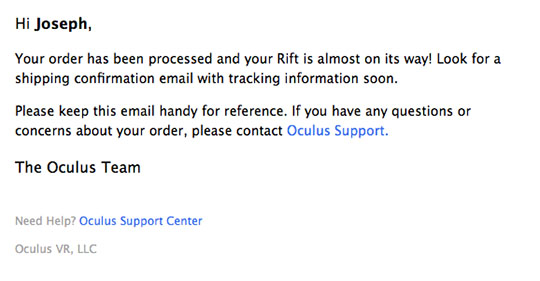 As our tech maven Ray Blanco quipped, “This is the ‘Hey, don’t lose hope’ update.”
The lack of planning reflects poorly on Oculus parent Facebook. But as we’ve been saying these last two months, the way to maximize VR’s 81,000% growth potential is not through headset makers like Facebook or Samsung. Rather, you want the companies that supply the critical components to the headset makers.
Ray has identified the best-in-class suppliers. You can see the fruits of his research at this link.
And if you’re still not convinced, just remember which industry has led the way, adopting every technological innovation of the last 30-odd years. Today, porn purveyors are on VR’s cutting edge, just as they were with VCRs and streaming video. See for yourself here. (Just be careful not to watch that link in a public place.)

To the markets, where the chatter is about oil.
As we anticipated yesterday, the OPEC conference in Vienna today delivered zero news and zero surprises; ministers couldn’t come to terms on a production cap. At last check, a barrel of West Texas Intermediate is nearly pancake-flat at $49.
Meanwhile, the major U.S. stock indexes are all slightly in the red, the S&P 500 shedding three points, at 2,096. Gold is little moved at $1,211. Like yesterday, the big gainer is Treasuries, the yield on a 10-year note barely above the 1.8% level now.
Tomorrow, all eyes will be on the heavily manipulated job numbers, which will be released an hour before the open. Joy and rapture…

“The Chinese are testing the frog-in-the-boiling-water thing, if you ask me,” says EverBank’s Chuck Butler of China’s most recent currency moves.
Chuck takes issue with Jim Rickards’ “Shanghai Accord” thesis, which we’ve detailed in these missives since late March. But we think the world of Chuck and want to bring you another perspective.
To quickly recap, the Shanghai Accord is a secret deal Jim says was struck on Feb. 26 — strengthening the euro and the yen while weakening the dollar. Because the Chinese renminbi is loosely pegged to the dollar, the result is a desirable weakening of the renminbi without the Chinese central bank formally devaluing and throwing markets into a tizzy.
All those currency moves fell into place during March and April and then reversed during May. Last week, the Chinese adjusted downward the renminbi’s peg to the dollar.

Thus the boiling-frog analogy, says Chuck: “Knowing now what the last large devaluation did to the global markets’ psyche, the Chinese have decided to slowly increase the heat and depreciate the renminbi on a slow-heat setting. That way, no one will be the wise guy that sees what they are doing.
“I don’t believe the Chinese are happy with the U.S. for 1) allowing their debt to get so large that it has ruined the value of the dollar, of which the Chinese own boatloads and 2) hiking interest rates while the rest of the globe deals with zero or negative rates (save for the Russians and Brazilians of the world) and putting the global economy at risk.
“So what do they do to let the U.S know? They devalue and depreciate their currency weaker when the U.S. wants the renminbi stronger. To that end, I wouldn’t be surprised to see the renminbi continue to depreciate the rest of the year.”
Longer term, Chuck still sees the Chinese moving toward a gold-backed renminbi. To be continued…

From the don’t-they-ever-learn department comes word that new tariffs on imported steel are a “double-edged sword” — as The Wall Street Journal delicately puts it.
Three months ago, the Obama administration imposed new duties on cold-rolled steel — the kind that’s used to make auto parts, appliances and shipping containers — from seven countries. The tariffs on Chinese steel were set at a staggering 266%.
This week, the Journal tells us the tariffs are having the desired effects. Steel imports are down 29% from a year earlier; U.S. Steel is jacking up prices to its customers. Not surprisingly, the tariffs are also having undesired effects — “raising costs for manufacturers of goods ranging from oil pipes to factory equipment to cars,” the paper says.
It’s almost surely worse than the Journal lets on. Despite his campaign rhetoric against “terriers and bariffs,” George W. Bush’s administration imposed steel tariffs in 2002 — a crass attempt to boost the re-election chances of Republican congressmen in Ohio, Pennsylvania and West Virginia.
Research by the Institute for International Economics found the tariffs indeed saved 3,500 steel jobs. Unfortunately, industries that relied on cheap imported steel cut at least 12,000 jobs — perhaps as many as 43,000.
Bastiat’s lesson about “the seen and the unseen” in action…

“So what if you can’t read The 5 in five minutes?” a reader writes after a complaint to that effect resurfaced in yesterday’s mailbag. “Take a speed-reading course or just enjoy as is.”
“I am so tired,” writes another, “of the whiners complaining that it takes longer than five minutes to read The 5. It does not, unless you have some sort of disability or never got past third-grade reading class. Let me clear a few things up for some of your less capable readers that lack an understanding of what ‘reading’ actually entails. There is NO EXCUSE for taking 15 minutes to read it:

“To summarize: If you are doing anything other than reading the words written in The 5, then you are either doing it wrong or you might be Common Core-educated. Below is a screen shot of how long it took me to read The 5 without clicking through the links, studying the charts or taking notes. Heck! The time shown even includes the time between when I pressed ‘Start’ and began reading to when I finished reading and pressed ‘Stop.’ As you can see, I had at least a full minute to spare.” 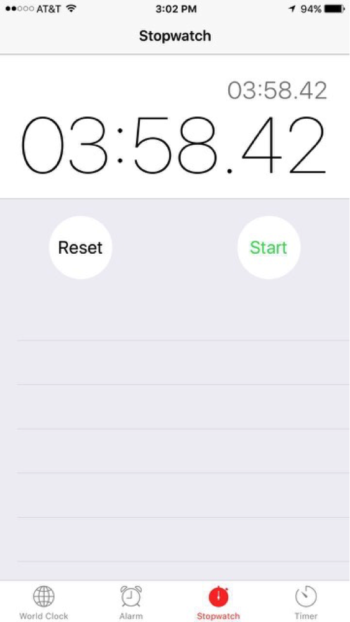 “Thanks for letting the chronically complaining crowd periodically air their grievances,” writes our final correspondent. “It is always a source of amusement to see what petty beefs they have with you.
“My first thought was that it is nice that you are not discriminating against the slower readers residing in cyberspace. Thanks as always for an informative, entertaining quick read!”
The 5: You’re welcome. Clock’s ticking… We’ll wrap it up here.
Best regards,
Dave Gonigam
The 5 Min. Forecast
P.S. As long as we brought up smartphones earlier… your smartphone is “broken,” whether you know it or not.
In fact, even though the CEOs of Apple, Samsung and Sony will never say it… all 7.9 billion smart devices on the planet have been sold with this “deadly flaw.”
And if you’re looking to get in on Silicon Valley’s next 79,900% long-term industry growth story… that’s GREAT news for you.
Don’t wait — get the full story today.