Dawn of a $100 Billion Industry

On the surface, it looks like another very bad development for the cause of medical marijuana… and any weed-themed investments.
Early yesterday, the DEA and local cops raided a place called Care By Design in Santa Rosa, California — the heart of the Golden State’s “cannabis extraction” industry. A host of spunky startups there produce precision-dosed extracts for treatment of everything from cancer to epilepsy to post-traumatic stress disorder.
Some are taken orally; others are inhaled. None are smoked like with a joint or a bong. 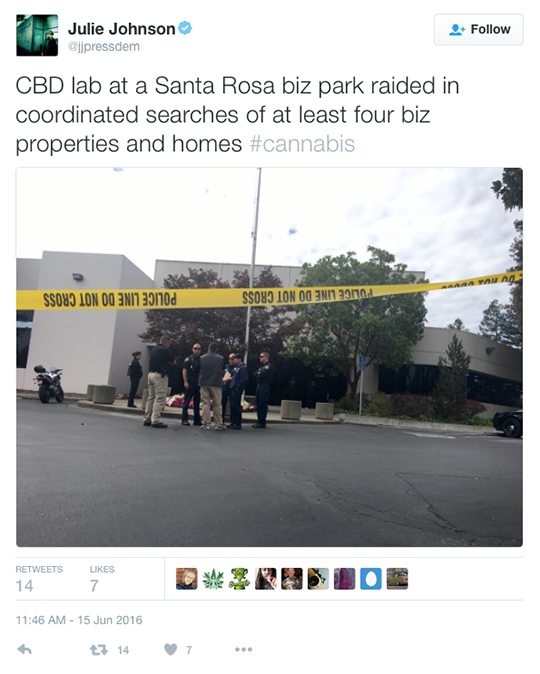 “California moved to regulate its billion-dollar medical cannabis industry in 2015,” says the San Francisco Chronicle by way of background. “But extraction exists in a gray area. The vast majority of California cities and counties have not yet regulated the industrial activity, with state laws taking effect by 2018.”
We learned about this raid via the Twitter feed of one Alan Brochstein. He’s the founder of 420 Investor — “a subscription-based due diligence platform for investors interested in publicly traded cannabis stocks,” says its own description.
As it happens, he’s moderating an event in New York today at the Cannabis World Congress and Business Expo. One would think the raid in Sonoma County is casting a pall over the event — one more reminder that cannabis exists in a gray zone in many states and remains illegal on the federal level.

For a long time, we’ve been down on marijuana-themed investing.
It goes back to the days when your editor collaborated with our executive publisher, Addison Wiggin, on the gone-but-not forgotten Apogee Advisory. Days after voters in Colorado and Washington state voted to legalize recreational pot in November 2012, we issued a dispatch for Apogee readers.
We said there were too many vested interests who wanted ganja to remain prohibido. We even compiled a “war on weed” portfolio made up of such vested interests — a private prison operator, a liquor distributor and a maker of oxycodone-based painkillers. It was a mixed performer over the following three years.

Still, we’ve kept an ear to the ground — knowing the day would come when the proverbial tide would start to turn and pot investments would become not only attractive, but insanely lucrative.
The recreational-weed referenda in Colorado and Washington in 2012 did signal a huge culture shift. It’s only a question of when matters will reach the tipping point.
A month ago, we took note of two developments heralding a shift…

Skeptics are becoming believers — including Colorado Gov. John Hickenlooper, who opposed the 2012 referendum. But now that revenues are coming in stronger than expected, he says, “It’s beginning to look like it might work.”

But what about that federal elephant in the room — the long-standing classification of marijuana as a “Schedule 1” drug?
As a practical matter, that classification means Uncle Sam considers pot more dangerous than cocaine or crystal meth.
But here again, we detect a shift. Last year, a group of senators wrote the DEA asking that classification be reviewed. In April, the DEA said it would decide by the middle of this year.
That would be now. The word could come any day.
As soon as the DEA’s response came in April, we tasked Ray Blanco of our science-and-wealth team to investigate the possibility the feds will reverse course — and open the floodgates for pot-themed investments.

His research is now complete. He’s uncovered seven compelling pieces of evidence, all pointing to the conclusion the feds will, indeed, reclassify marijuana.
“After decades of public outcry,” says Ray, “the U.S. government is finally poised to make a very important decision… one that could give rise to a $100 billion industry.
“Investors who position themselves now could grab a hefty portion of that cash for themselves. In fact, I’ve identified a pair of stocks that will benefit tremendously if the government announces what I think it will. One of these companies is so small right now, I think it could easily soar 1,000% or more.”
The time to act is before the decision comes down. Which, as we say, could be any day now. Surely no later than, say, the first of August. We encourage you to review Ray’s evidence for yourself. Click here to get started.

To the markets… where the Federal Reserve has put the safety trade in play.
To no one’s surprise, the Fed stood pat yesterday afternoon on its benchmark fed funds rate. The only drama surrounded “the dots” — the quarterly projections of Fed governors and regional Fed presidents about future rate increases, as depicted on a dot-plot chart.
We won’t make you glaze over with the chart. Suffice it to say the Fed sees only one increase before year-end now. Gee, isn’t that what Jim Rickards has been telling us for weeks?
As traders adjust to this new reality, the major asset classes break down like this…

Traders are also chewing over news from Britain that’s thrown the whole “Brexit” issue into a cocked hat: A Labour member of Parliament, Jo Cox, has been shot and stabbed to death. Organizers on both sides of the referendum have suspended campaigning with the vote only seven days away now.
For what it’s worth, Ms. Cox wanted Britain to stay in the European Union. At least one witness account says the attacker shouted “Britain first!” A suspect is in custody.

For a second day running, we have a veritable boatload of economic numbers to pore over…
The consumer price index rose 0.2% in May, less than the “expert consensus” was counting on. If inflation is heating up on the wholesale level, as yesterday’s figures indicated, it’s not reaching the consumer level yet… except in rents. Rent rose last month at the fastest pace since 2007, up 3.8% year over year.
The year-over-year increase in CPI is 1.0%. The real-world inflation rate from ShadowStats is 8.7%, down a touch from the previous month.
We also have two numbers that indicate how the economy is doing so far in June. It’s a mixed bag…

We’re not sure if it’s the tenor of the debate among the presidential candidates, but the post-Orlando bump in gun stocks didn’t last long.
Smith & Wesson Holding Corp. (SWHC) zoomed up near $24 on Monday, but as we write this morning, it’s back at $21.50, where it ended last week.
That’s a far cry from what happened after the San Bernardino attack six months ago. SWHC moved up a solid 20% and held a good chunk of those gains well into the new year. By March, Smith & Wesson’s CEO was telling analysts that recent attacks had propelled firearms “back into the world of politics, talking about increasing legislation in gun control,” which “no doubt” encouraged “a very strong buying period.”
But now that the sitting president and his two most likely successors are all on board with prohibiting firearms sales to people on the “no-fly” list, we can’t help wondering if the tide is turning.

Never mind that the No Fly List is a joke — one we’ve spotlighted periodically in 5 Min. business-travel alerts.
Last August, we noted a court ruling in which the FBI and the Justice Department came clean that the list is based in part on “predictive assessments about potential threats.” Who says “pre-crime” is science fiction?
It was less than two years ago a federal court ordered the government to inform citizens once they were put on the list. But good luck finding out why you’re on the list. Or going through official channels to seek redress — they don’t exist.
Federal guidelines make it clear: It requires neither “concrete facts” nor “irrefutable evidence” to be put on the list. Due process? What’s that?
Oh, we have an answer there. In terms of drawing up legislation in Congress, “Due process is what’s killing us right now,” Sen. Joe Manchin (D-West Virginia) told MSNBC this morning.
Hmmm… Looks as if both Mr. Trump and Mrs. Clinton have already moved on from that.

“As I am now halfway through my personalized copy of The New Case for Gold, it occurred to me that with all the discussion on gold by Jim and others in the Agora camp, there seems to be precious little comment or view about silver,” a reader writes.
“Jim has been suggesting a 10% of assets holding of gold all along. Is there a suggestion about a place for silver in the average investor’s holdings??
“I have been an entertained subscriber for some time who places value on the knowledge I gain from you guys.”
The 5: Jim is fond of the so-called “Monster Box” from the U.S. Mint, consisting of 500 U.S. Silver Eagles — which will set you back around $9,000. “If you want to go out on your bicycle and get groceries or farm-fresh produce for your family in a disruptive situation,” said Jim a while back, “I’d rather have a silver coin than a gold coin.”

“An interesting point about the Brexit that doesn’t get much ink,” a reader writes, “is the fact that however the citizens vote, Parliament has the final say.”
The 5: We made that very point here a few days ago: The referendum is not binding, and 70% of Parliament supports staying. Miss a day, miss a lot…

“I heard on the radio,” writes our final correspondent, “that Britain is having a referendum on breadsticks. I thought everyone liked breadsticks. What’s going on?”
The 5: You’re here all week, right? We’ll be sure to try the veal…
Best regards,
Dave Gonigam
The 5 Min. Forecast
P.S. Congratulations to FDA Trader readers — who recently bagged a 288% gains on Exelixis over the course of 18 months, two FDA approvals and several positive clinical trial reports.
Don’t feel bad if you missed out; there’s more where that came from. And the gains promise to be even more spectacular.