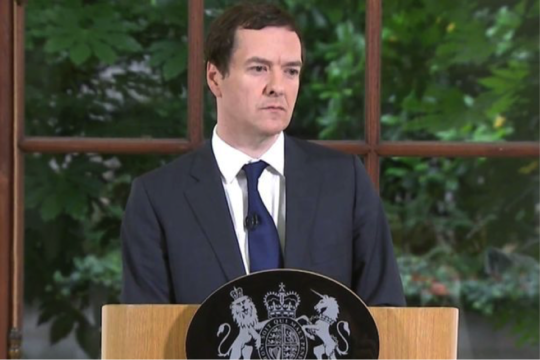 That’s George Osborne, the British finance minister. “chancellor of the Exchequer,” if you’re persnickety about the precise title.
Back during the Panic of 2008, U.S. Treasury Secretary Hank Paulson would stride in front of the cameras on Sunday night, before Asian exchanges opened for a new week. He’d make some announcement aimed at calming the markets. More often than not, he had the opposite effect. Asian markets would tank, and the contagion would spread westward across the globe. By Monday morning, the Dow industrials would open down 300 points.

And so in the wake of the “Brexit” referendum, and Friday’s market pandemonium, Osborne pulled a Paulson last night.
He said the United Kingdom is ready to face the future “from a position of strength,” although the need to “adjust” policy was inevitable.
Hearing nothing but platitudes, traders sent the British pound even lower against the dollar than its intraday lows on Friday — $1.322. For perspective, it was $1.50 just before the election results started coming in Thursday night.
Britain’s main stock index ended the day down another 2.5%. Trading was halted briefly in a couple of major banks after “circuit breakers” kicked in. Barclays tumbled 12%; Royal Bank of Scotland took a 14% spill.

Not helping to calm matters — International Monetary Fund chief Christine Lagarde.
She too piped up last night — saying although the referendum results caught markets by surprise, there’d been “no panic” on Friday and everything is “under control.”
S&P Dow Jones Indices says more than $2 trillion was erased from the value of global stock markets on Friday — even more than the day in 2008 after Lehman Bros. collapsed. If that’s “under control,” what in God’s name would “out of control” look like?

Meanwhile, the safety trade on this Monday has indeed spread westward…

But wait — central bankers will pull another rabbit out of their hat and make it all good again, right?
Heh… If you’ve been reading us for anything longer than a week, you know we possess no such faith.
But now it’s seeping into the mainstream: This morning’s New York Times tells us of “a number of investors and economists who worry that another round of central bank intervention in the markets will compound the sense of alienation, frustration and anger at global elites that encouraged a majority of Britons to opt for leaving the European Union.”
In other words, central bank action might leave everyday people feeling even more “pitchforky” than they already are… 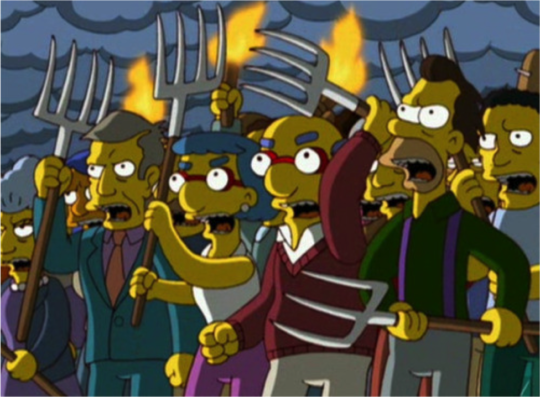 Which brings us to a postscript about the failure of the betting markets to forecast the referendum’s outcome — something Jim Rickards anticipated as he wrote to his readers last week.
Many of these predictions markets were pricing in a 75% probability that Britons would vote to “Remain” in the European Union. “Proponents of betting markets as an alternative to increasingly questionable old-fashioned opinion polls have some soul-searching to do,” writes Stephanie Slade at Reason.
Not all of them are: Some are making excuses that a referendum with a single subject is more prone to error than votes for elected office. But a statement from Ladbrokes — the outfit that garnered the most attention last week — conceded that it’s time to reflect on the system’s “potential flaws.”
Hmmm… We’re not sure how you adjust a statistical model for confirmation bias. As Jim pointed out, “The people making big bets on ‘Remain’ were likely to be the bankers and elites who have the most to lose from ‘Leave’ — including massive job layoffs that have been threatened by bank CEOs.”
[Ed. note: Jim Rickards was one of the few public intellectuals who acknowledged that a “Leave” vote was even a possibility. He said as much in interviews on the financial TV channels. But only his readers who acted on his recommendations had the chance to profit last Friday.
Jim’s still doing interviews and offering his analysis. But there’s something he hasn’t said on TV. He’s reserving this message only for readers like you. If you want to know what’s coming post-Brexit, click here for his special “flash” Currency Wars update.]

Meanwhile, we see volatility as measured by the VIX moving toward levels last seen in January and February… 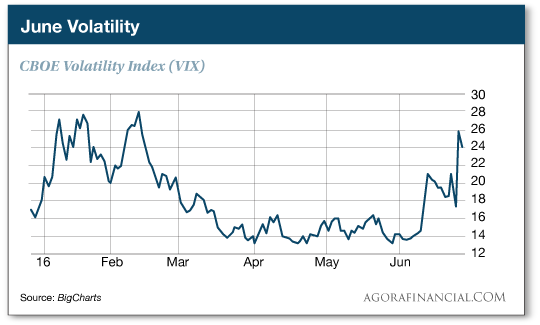 Indeed, the first big spike this month came a couple of weeks before the Brexit referendum. And while many investors are biting their nails, others are seizing on the chance to double their usual investment income.
“There are certain windows of opportunity that show up periodically (usually only once or twice a year) in which income investors can double the payments they receive from the markets,” said our income specialist Zach Scheidt during the last window, in January.
“These special windows of opportunity are difficult to predict, and when they happen, they usually only last for a couple of weeks. But the income you can make during these windows can dramatically alter your returns for the year.”
So far this month, Zach’s premium subscribers have had the chance to seize on this volatility to collect payments of $500… $420… and $270. His next recommendation is due tomorrow. And depending on how much capital you have to invest, you can repeat the process week after week.
To learn more about how Zach’s perpetual income strategy works, check out the results of our unusual “social income experiment.”

“It turns out that starting your own business is not that easy,” said President Obama three days ago.
Gee, ya think?
Lost in all the Brexit noise on Friday was the fact the president and Facebook CEO Mark Zuckerberg headlined an event in Silicon Valley called the Global Entrepreneurship Summit. Then again, the president’s onstage remarks were a snooze.
Backstage, however, he supposedly let it out that his big post-presidency project will be — drumroll, please — entrepreneurship.
Said one of the privileged insiders to BuzzFeed: “He said that he wanted to create [a program in his] foundation that would focus on young people who are giving themselves to their entrepreneurial endeavors, whereby he would make sure that would have an opportunity to succeed.”

Meanwhile, the rough-and-tumble real world where “starting your own business is not that easy” has in fact been getting harder over the last 25 years.
Last month, an outfit called the Economic Innovation Group released alarming research into the collapse of startups in the United States.
As we’ve documented regularly in recent years, small businesses aren’t the engine of job creation as much as new businesses, less than five years old.
This study reached back to the 1991 recession. It reached two major conclusions. The first is no surprise if you’ve been reading us for a while. The number of new businesses is plummeting. 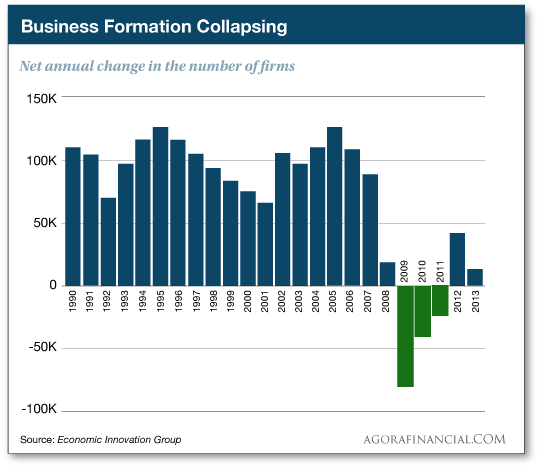 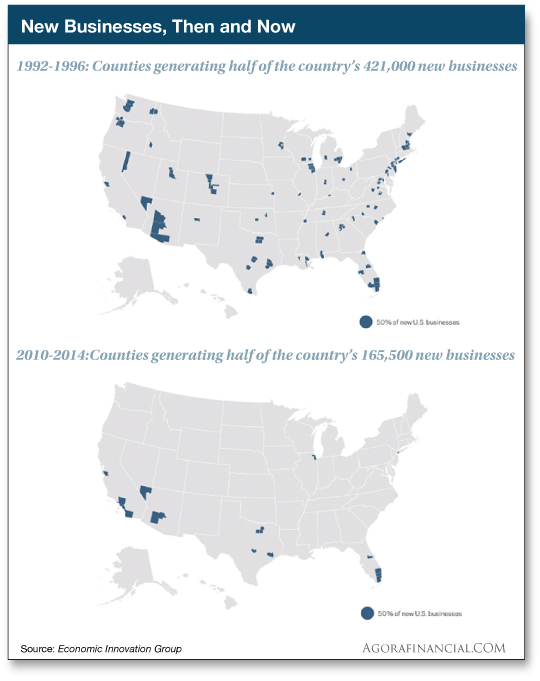 “These findings,” write the study’s authors, “suggest an economic future that may look very different from the recent past — one in which growing geographic disparities and diminished business dynamism become increasingly urgent concerns.
“In response, the economic solutions and development strategies of the future must focus on removing barriers to entry for new firms and fostering local ecosystems of investment and entrepreneurship throughout the country.”
Huh — we didn’t read anything about that coming out of the “Global Entrepreneurship Summit.”
The whole event struck us as another example of elite insularity. One headliner, Obama, has never had to meet a payroll. As for the other… we’re in deep trouble if Mark Zuckerberg is the face of 21st-century entrepreneurship — an Ivy League grad whose company generates billions in revenue but produces nothing tangible, nothing that lifts up the everyday person’s standard of living.
On to the mailbag…

“Your comments on Nixon’s shenanigans to demonize the left and blacks,” a reader writes, “followed by Clinton’s demonization of the conservatives after Oklahoma City, and now the ‘Remain’ elites with Brexit, reminds me of the days of Joe McCarthy and the left’s whining about both that senator’s goals and his tactics.
“It is glaringly apparent that the left elites (and I include ‘Tricky Dick’ Nixon) have shunned McCarthy’s goals but have become deeply committed to his tactics.”

“Royal Gold call option closed on a five-bagger this morning,” a reader wrote to us Friday. “Thanks, Jim Rickards!
“To my British friends, better luck next time!”
The 5: Golly, and that recommendation in Rickards’ Intelligence Triggers was designated a sell months ago. But that only goes to show a savvy reader can exercise independent judgment and walk away even better off.

“Dave, we can only hope the ‘breadsticks’ mess is the snowflake that eventually pulls down the temple of central planning — or at least pops the current bubble they’ve inflated,” writes our final correspondent.
“Then again, these are politicians and bankers we’re talking about. Despite the wake-up call, they’ll be strongly motivated to protect the status quo any way they can.
“Jim Rickards’ whole approach to this process has been an object lesson in the power of strategic thinking. What a splendid example of how to think about complex systems and act on the probabilities!
“As always, thanks to you and your team. Keep giving ’em hell…”
The 5: We will!
Best regards,
Dave Gonigam
The 5 Min. Forecast
P.S. As we go to virtual press, S&P has cut its rating on British government debt from AAA to AA. Clearly, Brexit is shifting the global currency wars into a new phase. The winners have a chance at massive profits. The losers could face financial ruin.
“You don’t want to be on the wrong side of this one,” warns Jim Rickards. Especially when he thinks the biggest profits are still to be made.
Want to grab your share? Here’s where to get started.