The Day the Sunspots Died

The sun has reached middle age… and from here on, maybe the globe will be less prone to war. But maybe the markets are moving into terminal low gear.
Emphasis on the word “maybe.”
Sit back and relax. We’re going to have a little fun today going into the holiday weekend…

“The sun’s 11-year sunspot cycle is likely to disappear entirely,” says Travis Metcalfe of the Space Science Institute in Boulder, Colorado.
He’s lead author of a paper just published in The Astrophysical Journal Letters, drawing on extensive data from NASA’s Kepler Space Telescope.
“Heretofore,” explains a Forbes summary, “the sun was thought to have been just a more slowly rotating version of a normal yellow dwarf (G-spectral type) star.”
No more: “From here on out, the sun is likely to have fewer sunspots than during the first half of its estimated 10 billion-year life as a hydrogen-burning star.”
The transition will take a few hundred million years. That said, there’ve been no sunspots at all for the last eight days. This image of the sun from NASA’s Solar Dynamics Observatory — captured on Tuesday — is a preview of coming attractions… 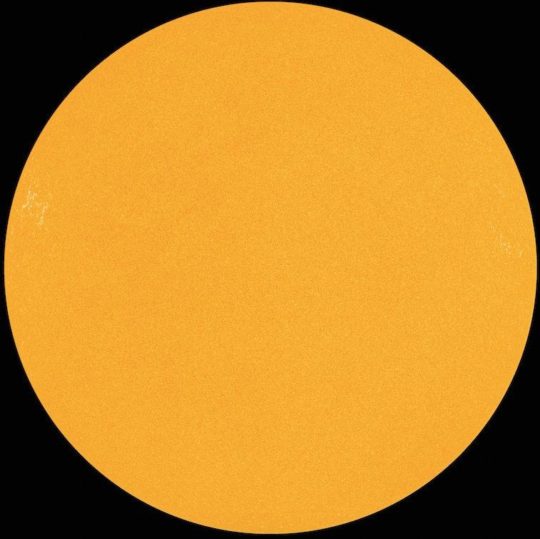 As it happens, the current 11-year solar cycle is the weakest in a century.
Solar Cycle 24 — astronomers started counting the cycles in 1755, when modern sunspot record-keeping began — has been a snooze, at least compared with the last two. Here’s a chart we snagged direct from NASA, updated through January of this year…

So what does any of this have to do with war and the markets, you ask?
It comes down to a link between sunspots and “mass excitability” — theorized by the Russian researcher Alexander Chizhevsky in the 1920s.
“Chizhevsky,” says a thumbnail sketch at Wikipedia, “proposed that not only did geomagnetic storms resulting from sunspot-related solar flares affect electrical usage, plane crashes, epidemics and grasshopper infestations, but human mental life and activity.”
He studied sunspot records and compared them with riots, revolutions and wars in Russia and 71 other countries going back nearly 2,500 years. “He found that a significant percent of what he classified as the most important historical events involving large numbers of people occurred around sunspot maximum.”
OK, we know: Correlation does not equal causation. Wet sidewalks don’t cause rain. And Chizhevsky didn’t try to explain a mechanism by which sunspots, and the geomagnetic storms they trigger, made people go more berserk than usual. (His fiercest critic was Stalin, who disliked what Chizhevsky’s research implied about the Russian revolutions of 1905 and 1917; Chizhevsky spent eight years in the gulag.)

But look at that chart again. Leave aside the weak peak of Cycle 24. Check out the smooth lines denoting the two previous peaks.
The peak of Cycle 23 in 2001 nearly coincides with the Sept. 11 attacks. The peak of Cycle 22 in 1990 coincides with Iraq’s invasion of Kuwait.
You can go back further: 1979 marked the start of both the Iran hostage crisis and the Soviets’ war in Afghanistan. 1968 was an epic year of conflict — the Tet Offensive, the Prague Spring, the MLK and RFK assassinations, the Democratic convention meltdown in Chicago, the start of the Troubles in Northern Ireland.

For decades, there’s been a niche of analysts who see a link between sunspots and events in the economy and markets.
In the 1940s and ’50s, the American economist Edward Dewey latched onto Chizhevsky’s work and gave it a Western audience — publishing it through his Foundation for the Study of Cycles.
More recently, an ex-Goldman Sachs analyst named Charles Nenner has said the stock market moves in tandem with the sunspot cycle. More sunspots equal a rising market; it’s that “mass excitability” thing again. Fewer sunspots, markets go down.
Nenner’s track record is mixed: He called Dow industrials’ top in 2007. But in mid-2010, he projected the Dow would be cut in half from 10,000 to 5,000. It instead continued marching upward; since early 2014, it’s traded in a range of 16,000–18,000.
Also on board the sunspot train is Paul McCulley — who a few years ago was part of the triumvirate running the giant bond-trading firm Pimco along with Bill Gross and Mohamed El-Erian. He anticipated a stock market top in late 2013, coinciding with a peak in Cycle 24. In the event, the market kept climbing well into early 2015.
Hmmm… We’re not sure how any of that lines up with the sunspot chart above.
Here at The 5, we’ll maintain a strict agnosticism about the sunspot-market link. But if there’s something to it… and if sunspot activity is in terminal decline… it doesn’t bode well for the next few millennia, does it?
The war-and-conflict link looks a little stronger, though. Maybe peace will reign and we really are entering the Age of Aquarius. Groovy…

On to a more short-term view of the markets: The Dow might very well end the week above the 18,000 level — where it closed before the Brexit “surprise” a week ago yesterday.
At last check, the index is up 30 points, at 17,960. The S&P 500 has already crested the 2,100 level. All in all, a remarkable recovery.
But… the safe havens that rallied so strongly right after the vote are still looking great. Treasuries? Prices are up, yields down; earlier today, the yield on a 10-year note briefly equaled the 2012 record low of 1.38%. Gold has powered up $17, near two-year highs at $1,337. And how about silver? Up more than 4%, to $19.44.
The big economic number of the day surprised to the upside; the June ISM manufacturing index clocks in at 53.2. Recall that numbers above 50 indicate a growing factory sector. The number isn’t stellar, but it is the best since February 2015.

With the first half of 2016 now in the books, we present the following chart as evidence supporting Jim Rickards’ assertion that gold is assuming its traditional role as money… 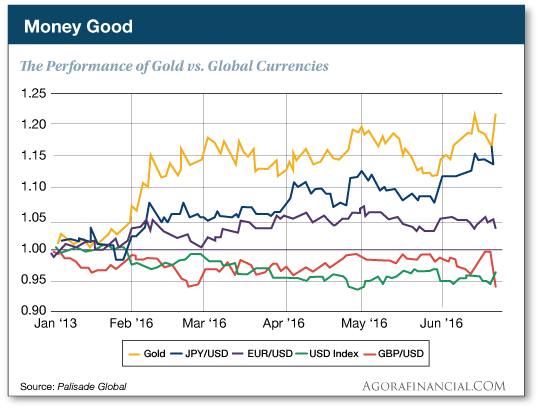 “At times,” Jim said here in February, “gold behaves like a commodity. The gold price tracks the ups and downs of commodity indexes. At other times, gold is viewed as a safe-haven investment. It competes with stocks and bonds for investor attention. And on occasion, gold assumes its role as the most stable long-term form of money the world has ever known.
“Right now, gold is behaving more like money than a commodity or investment. It is competing with central bank fiat money for asset allocations by global investors. That’s a big deal because it shows that citizens around the world are starting to lose confidence in other forms of money, such as dollars, yuan, yen, euros and sterling.”
But Jim says gold is on the verge of a powerful new move. It’s his third big forecast of 2016. He nailed the first two — no Fed rate increase in June, and a higher likelihood of a “Leave” vote in Britain than the mainstream ever figured.
There’s time to act on this third forecast. Start here.

“A $150 billion gift to Canadian citizens,” says a candid assessment from our income specialist Zach Scheidt. (If you’re a Canadian reader, Happy Canada Day.)
For more than a year, Zach has extolled the virtues of the Canada Pension Plan — the nation’s version of Social Security. Unlike Social Security, the CPP is professionally managed, runs a surplus and is growing its reserves.
The CPP is out with its latest numbers, updated through the first quarter of this year… 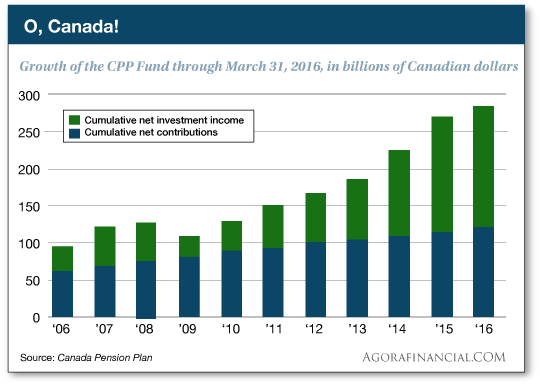 “The blue bars in the chart above show the amount of money that Canadian citizens have contributed to the Canada Pension Plan,” Zach explains.
But it’s the green bars that matter, he says: “These bars represent the investment income generated by the Canada Pension Plan. That’s $150 billion of wealth as a direct result of shrewd investment decisions.
“Since the Canada Pension Plan was created, this investment income is actually greater than the amount of contributions that Canadian citizens have paid into the program.
“In other words, the Canada Pension Plan is collecting more income from the markets than it is collecting from citizens. I only wish our U.S. Social Security System were half as profitable.”
You could write your congressman a letter complaining about how they’ve raided Social Security’s “trust fund.” But you’d be better off adopting Zach’s strategy of “piggybacking” the CPP. Learn how to get started at this link.

“How much of the post-Brexit U.S. stock market recovery,” a reader writes “is due to a) huge-and-stealthy central bank purchases and b) European investors trying to get their money out of stocks denominated in EU money or British pounds sterling?
“Can stealthy central bank stock purchasing be detected? How far can this go before central banks run out of money? Can central bank stock purchases prevent serious market meltdowns forever?
“Love The 5.”
The 5: We rule nothing out. We’ll probably learn something a few months from now.
Consider the case of Japan, and a Bloomberg story from last April: “While the Bank of Japan’s name is nowhere to be found in regulatory filings on major stock investors, the monetary authority’s exchange-traded fund purchases have made it a top 10 shareholder in about 90% of the Nikkei 225 Stock Average, according to estimates compiled by Bloomberg from public data.”

“I presume the old adage ‘Those who can’t do, teach’ applies to Obama trying to teach kids about entrepreneurship,” a reader circles back to a topic from earlier this week.
“Just wonder if he’s going to teach them about all the licenses they will need to open a lemonade stand and all the tax filings they will be required to make.
“Let me know if he goes to run a public company. I am sure there will be a slew of creative put plays on that stock run by the neophyte in all things business.”
The 5: A more likely scenario is that he joins a company or three as a “special adviser” and the access to special favors that come with such a deal will send the stocks soaring.

“Thanks for being too simplistic and making too much sense,” writes our final correspondent, reacting to the nonspecific feedback we got yesterday.
“I find myself understanding almost 98% of what you say and agreeing with at least 90% of it.
“Oh… woe is me!”
The 5: We blanch at those percentages a little — that’s a heavy responsibility you’re putting on us!
Safe travels (if you’re traveling this weekend),
Dave Gonigam
The 5 Min. Forecast
P.S. We’re back tomorrow with our weekly wrap-up, 5 Things You Need to Know. U.S. markets are closed Monday for Independence Day. The weekday edition of The 5 returns on Tuesday.