And then there were 2,000.
Only two days ago we mentioned that assets in ETFs backed by gold had risen by more than a third during the first half of 2016.
The total at the start of the year was 1,458.1 metric tons. More than 500 metric tons had been added since, for a total of 1,959.1 as of last Friday, according to Bloomberg. Thirty-seven of those 500 tons came last week after the Brexit vote.
This morning, Bloomberg updated its figures through yesterday. In just three trading days — global markets were open on Monday even if U.S. markets were closed — another 42.3 metric tons were added to the total, which now stands at 2,001.4. 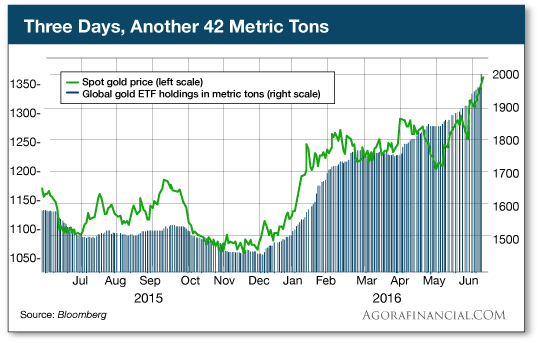 “Investment demand has been very strong, with institutional buyers of ETFs the big gorilla in the room,” GoldMoney vice president John Butler tells Bloomberg. “We’ve reached a psychological tipping point where people see a material increase in the risk of a repeat of what we saw in 2008.”

For whatever it’s worth, gold is looking downright respectable in the establishment media these days.
Ordinarily, our contrarian impulses would make us cast the ol’ side-eye at such a development. We might even wonder if it was time to lighten up on one’s gold holdings.
But sometimes mainstream attention generates its own momentum. The aforementioned Bloomberg story cited these gold forecasts…

Even the vampire squid is coming around. Goldman Sachs — which had to abandon five of its six “top trades” of 2016 by the 10th of February, heh — just upped its three-, six- and 12-month targets.

Even CNBC is treating gold with respect. Yesterday, technician Craig Johnson from Piper Jaffray went on Trading Nation and said gold has at least 12% more upside from here.
Johnson gained some notoriety in recent years for nailing his year-end forecasts on the S&P 500 (he came up short last year, however).
“We have recently broken above some really important resistance levels at around $1,300 for gold, and maybe we can see it move back above $1,525,” Mr. Johnson said. “There is a lot of uncertainty in the geopolitical arena at this point in time [and] there is uncertainty with negative rates happening.”
Meanwhile, CNBC’s website is giving space to Peter Boockvar of the Lindsey Group. “Look at gold as the anti-fiat currency,” he writes. “The one that can’t be manipulated, debased and conjured up electronically at one’s whim. One has to actually dig it out from the ground. Thus, it is referred to as ‘precious,’ as there is a limited supply.”
Boockvar says gold and silver look downright attractive in a world of negative interest rates. “We are witnessing the culmination and likely end of the post-1971 global monetary regime when fiat currencies shed any and all ties to the price of gold. I am most confident that gold and silver will be the last currencies standing.”
[Ed. note: As we mentioned yesterday, Jim Rickards doubled down this week on his own prediction of $10,000 gold.
To be clear, he’s not forecasting $20,000 gold. Rather, he’s showing you the way to claim double your fair share of gold coins he’s reserved just for Agora Financial readers like you.
We opened this extraordinary offer just yesterday. We’re compelled to shut it down one week from today. You’ll understand why when you click here for an urgent gold update from Jim — no long video to watch, we promise.]

To the markets, where traders have gotten their risk appetite back. At least for the moment.
As noted above, gold sits at $1,350 — which is a fair-sized pullback from yesterday’s peak near $1,375.
Hot money is also exiting Treasuries, pushing yields higher. The yield on a 10-year note has risen from a record-low 1.37% to 1.41%.
And with that, the major U.S. stock indexes are again flirting with big, round numbers. As we check our screens, the Dow is 75 points away from 18,000… and the S&P 500 is five points above 2,100.
Crude is holding its own after the latest inventory numbers from the Energy Department at $47.83.

It took more than a year… but a warning we conveyed around Memorial Day 2015 made its way to the front page of The Wall Street Journal today.
Back then, Jim Rickards relayed a confidential dinner he had with a bond-market bigwig — someone whose identity Jim wouldn’t disclose even to us.
“Jim, it’s worse than you know,” he said of the stresses facing the market for government bonds. “Liquidity in many issues is almost nonexistent. We used to be able to move $50 million for a customer in a matter of minutes. Now it can take us days or weeks, depending on the type of securities involved.”
The Journal story today begins with a money manager who worries “that when he needs U.S. Treasury bonds one day, he might not be able to get them.”
Central banks are buying so many Treasuries — and other bonds of sovereign nations — that they’re crowding out other buyers. That’s a major reason Treasury rates touched record lows earlier this week. “The world is running out of positive-yielding safe-haven bonds,” says Bank of America Merrill Lynch strategist Shyam Rajan.

The paper tiptoed around the possible consequences. But as we said last year, we got a preview of coming attractions in the fall of 2014… when the rate on a 10-year T-note experienced a “flash crash.” 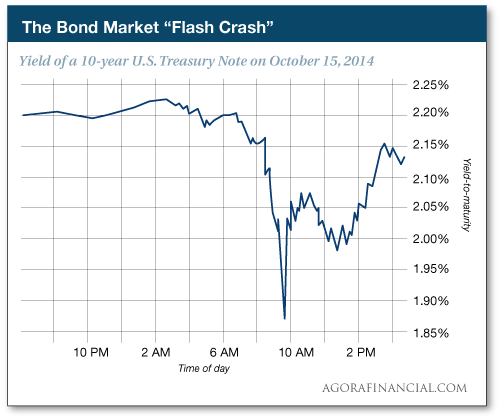 Jim and his confidential contact wrapped up their dinner on this cheery note: “Eventually, there would be a flash crash that would not bounce back and would be the beginning of a global contagion and financial panic worse than what the world went through in 2008.”
His guidance then still stands: “Have some assets outside the traditional markets and outside the banking system. These assets could be physical gold, silver, land, fine art, private equity or other assets that don’t rely on traditional stock and bond markets for their valuation.”

And no, Americans aren’t leading the way. Google says the highest interest is concentrated in Norway, Hong Kong, Singapore, Sweden and Finland.
Hmmm… We suspect that’s not because people in Nordic countries and Asian city-states are any more sexed-up than anyone else. Rather, it’s because some of the highest internet speeds in the world are found there… and VR uses up a lot of bandwidth.
It’s not just interest in VR porn that’s going off the charts. So is the investment potential in VR — up to 81,000% growth between 2015 and 2020, by one credible estimate. To learn how you can make the most of that potential, we encourage you to follow this link — but only if you’re in a private place and you don’t object to video that’s a little risqué. Otherwise, you can check this out instead.

“Frankly, I do not see any rational explanation for such a bold prediction,” a reader writes of Jim Rickards’ $10,000 gold call.
“He is a teacher to his readers, and we expect a little more meat. If it does not happen (even half of it), his credibility will be hurt for good.”
The 5: We’ve discussed it here before. Maybe not enough. As Samuel Johnson once said, “Men more frequently require to be reminded than informed.”
The thumbnail explanation: Whenever the global financial system reaches the point of collapse and the powers that be decide to regroup… they’ll give their new global currency partial gold backing. Not because they want to, but because that’ll be the only way to instill confidence in the new system.
The possible formulas for that gold backing are nearly infinite… but the one Jim finds most credible is that gold would back 40% of the “M1” money supply in the globe’s three biggest economies — the United States, the eurozone and China.
That’s the short explanation. We went into much more detail back on May 20.

“About your reader who thinks ‘autonomous’ cars will be wonderful,” reads our next entry, “I would like to remind him that there’s absolutely nothing autonomous about these cars.
“They will be GPS’d and monitored everywhere they go, and if the feds decide they don’t like you, the car will be shut down remotely or deliver its occupant to the nearest Gestapo headquarters.”

“I was extremely disheartened,” writes a reader with another downer, “after seeing the statements from Scotts Miracle-Gro about legal marijuana and the use of pesticides.
“You bring toxic pesticides into the picture and suddenly that endangers people’s health, and the many benefits of cannabis are suddenly diminished — sad.”

“Wow, Miracle-Gro for pot!” says another reader. “Now we’ll have to pay more for organic weed. GMO marijuana, anyone? Can you say, ‘Frankenbuzz’?”
The 5: We hear you. But that “bandwagon effect” only reinforces the investment case for (carefully selected) marijuana-oriented stocks. That, and the imminent prospect of an about-face in federal policy. We present our most compelling case for such a scenario right here.

“I know you guys aren’t formally political,” writes our final correspondent today, “but there is no question that there is a definite free market/protection of individual rights/common sense sort of flavor to most of the writing in The 5.
“Along with the financial insight, I have loved this breath of fresh air usually to be found here.
“Along this line, and I realize it might be a stretch, I was thinking you might get some traction hosting a bunch of extra-large dumpsters to hold all the Matt Damon DVDs that his millions of new ex-fans can send in. I have several which I will be happy to send by overnight mail. Perhaps you can title it, ‘Ending the Global Utopia Nonsense.’”
The 5: We take it that’s a reference to a celebrity’s latest bloviating about “climate change”?
As we’ve said before, the climate change crowd isn’t nearly as concerned about climate or carbon as it is about control — control over a wide scope of human activity, preferably with as little discussion as possible before the implementation of “emergency measures.”
And if, as our foray into the topic of sunspots suggested last week, we’re headed toward a new Little Ice Age and significant planetary cooling… well, they’ll have an all-new crisis with which to justify their schemes…
[Update: We understand Mr. Damon’s crusade is, in fact, about gun control. Same utopian scheming, different day…]
Best regards,
Dave Gonigam
The 5 Min. Forecast
P.S. Did you play it? Readers of Jim Rickards’ Currency Wars Alert were urged this morning to take 105% gains in a little over four months on a play that moved up sharply after the Brexit referendum.
As we mentioned yesterday, the Brexit aftermath is serving up new trade possibilities with even bigger profit potential. The story’s not going away, so you might as well profit from it. Click here to get started.