All hail the platinum group metals. Platinum is up 2% as we write this morning, at $1,177… and palladium is up 5.4%, at $729, a 14-month high.
Palladium is up 19% over the last month. Supplies are tight. Production from Russia and South Africa isn’t keeping up with demand. And word came overnight that Chinese car sales just hit a 17-month high. The platinum group metals are essential for the pollution controls on modern cars.
Dollar weakness is also helping matters. Ever since the dollar pop last Friday that coincided with a respectable jobs number, traders have come back to their senses about the likelihood the Federal Reserve will raise interest rates next month. The U.S. dollar index has retreated from 96.5 on Friday to 95.7 at last check.

Thus, all the precious metals have been quietly on the march this week. Gold is back to $1,344. Silver has recovered the $20 level. Not bad, but still lower than after Friday’s beat-down.
“Entry points in gold, silver and mining stocks just got better,” asserts Jim Rickards. ”We’ve got some fabulous recommendations to take advantage. When fundamentals reassert themselves, these picks are poised to outperform.”

“We’re eight months into a full-fledged gold and silver price rally,” adds Byron King — our resident geologist who does the boots-on-the-ground company-level research for Rickards’ Gold Speculator.
“It began on Jan. 21, after the Bank of Japan announced a policy of negative interest rates — meaning that depositors pay the bank for the privilege of placing their money on account. I thought that negative rates were an insane idea, and I predicted that people would stuff cash into mattresses and begin buying precious metals and mining shares with both hands. Turns out I was right.”
Byron underscores the point with a chart of gold bullion — or a reasonable proxy, the GLD ETF. The move up from the January lows is barely perceptible when the chart includes an index of small-cap exploration-focused gold miners. 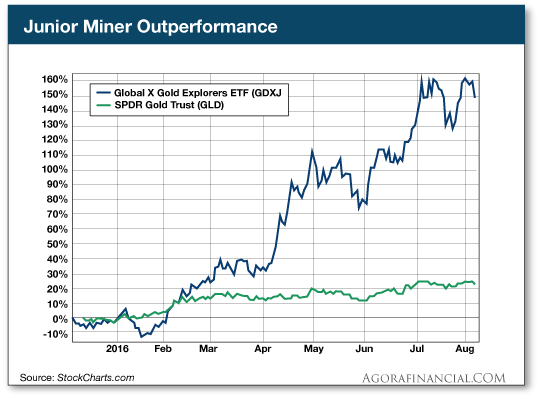 “There’s more upside to come,” Byron believes. “Negative interest rates are still here, with no sign of going away. Meanwhile, governments across the world are creating debt faster than any conceivable level of future economic growth will ever pay it off. And central banks appear to be clueless about where to go from here.”
Since we launched Rickards’ Gold Speculator three months ago, readers have had several chances to trounce the performance of even that stellar ETF in the chart above. How about a gain of 29% in just three days? (It was cut short by a takeover, but would you turn it down?) Or how about open gains of 101%… 114%… even 159%? Again, that’s in just three months.
That’s the advantage of having a team like Jim and Byron. Jim identifies the global macro forces driving gold upward, and Byron does the micro-level research to uncover best-of-breed junior gold names. Their next recommendation is due for release tomorrow. It’s not too late to get on board — as Byron shows you at this link.

Stocks remain in summer-doldrums mode on this hump day… although we daresay tomorrow is the first anniversary of China’s shock devaluation that set off the first 10% correction in years.
The S&P 500 is off about a quarter percent at 2,177. Treasuries are rallying a bit, the 10-year yield at 1.51%. No major economic numbers, no big earnings reports. Snooze…

Plastic is cool again. Took long enough. Not that we’re cheering.
The Federal Reserve Bank of New York is out with its quarterly review of household debt. This edition finds outstanding credit card debt totaling $730 trillion. The number peaked just shy of $900 trillion shortly before the Panic of 2008 and went into retreat as Americans tried to shore up their personal balance sheets. The trend finally reversed starting around two years ago.
For the moment, however, delinquencies remain comparatively low. Just over 7% of balances are 90 days or more in arrears — the lowest in more than a decade.

That said, more people with low credit scores are acquiring cards again. Half of people with a score below 620 now have at least one card — up from 45.6% two years ago. And as we noted in June, card issuers are anticipating growing losses. It’s easy to put expenses on plastic… until it’s not.

OK, we take it all back. The “28 pages” didn’t change a damn thing.
The Obama administration has just signed off on another $1.15 billion in arms sales to Saudi Arabia. A statement from the Pentagon agency that oversees foreign arms sales says the deal “conveys U.S. commitment to Saudi Arabia’s security.”
Not that Saudi Arabia faces many external threats these days. Instead, the arms will help prolong the kingdom’s pointless quagmire of a war on its southern border in Yemen — home now to the world’s worst humanitarian crisis, with 20 million people lacking access to clean water. But hey, it’s more money for General Dynamics — the principal contractor on this deal — so it’s all good, right?

So much for the 28 pages “challenging you to rethink everything,” as Rep. Thomas Massie (R-Kentucky) said months ago, cited here in The 5.
At the time, the document — redacted from a joint congressional inquiry into the Sept. 11 attacks — was still classified and Massie was one of the few people who’d read it. We knew it spelled out details of how money flowed from leading people and groups in Saudi Arabia to the hijackers… but we awaited the details.
As we documented in real-time, the feds finally released the 28 pages late on a Friday last month — when news is always best buried.
Turns out the report followed a fairly direct money trail from Prince Bandar — Saudi Arabia’s ambassador to the U.S. at that time — to the San Diego-based hijackers who flew American Airlines Flight 77 into the Pentagon. OK, there’s some nuance to it, but we don’t think we’re overstating the case here.

But the Very Serious People in Washington don’t care. They successfully beat back the few media inquiries with the equivalent of, “Move along, nothing to see here.”
Now with the arms deal, the White House has signaled it’s still business as usual with the kingdom… and Congress is almost sure to go along. “Lawmakers have 30 days to block the sale,” says Reuters, “although such action is rare.”
Still… we remain on high alert for another stab in the back by Washington’s much-touted “ally.” A financial betrayal. As we’ve been saying for nearly a year, the Saudi Arabian riyal is one of the few currencies on the planet that hasn’t devalued against the dollar sometime in the last five years. And with crude prices still stuck in the low $40s, the kingdom’s finances are hurting.
Will you be ready when the inevitable devaluation comes? If you are, Jim Rickards says it could mean gains of 530%… 848%… even 2,196%.

After our musings about “extraction” yesterday, we came across an eye-opening chart that shows how much — or little — Americans get for their health care dollars.
“The graph shows the relationship between what a country spends on health per person and life expectancy in that country between 1970 and 2014 for a number of rich countries,” writes Max Roser from the website Our World in Data.
Americans as a whole spend far more, and live less long… 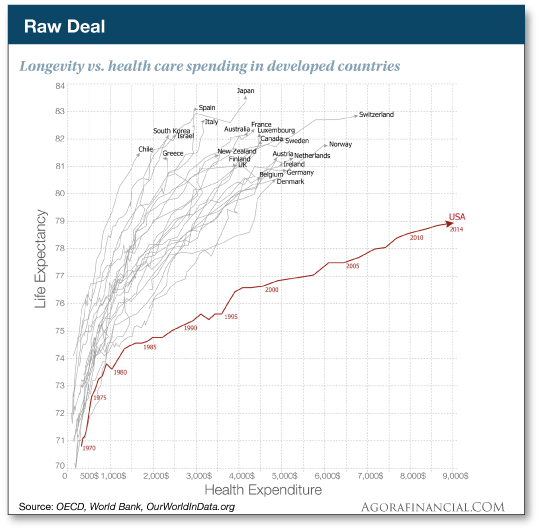 So what gives? “The U.S. health care system is characterized by little access to care for some and very high expenditure on health by others,” says Mr. Roser. “The top 5% of spenders accounts for almost half of all health care spending in the U.S.”
Well, OK… but why?
Nearly five years ago in the gone-but-not-forgotten Apogee Advisory, we described how one in three Medicare patients undergoes surgery during the final year of life… and one in five has an operation during the final month.
Do they really need it? Is it something the family insists on?

Often, it has to do with the perverse incentives of Medicare.
“Medicare reimbursement and the availability of hospital beds are more likely to influence a doctor’s decision to operate than a patient’s need or desire,” according to a Reuters account of a study published in the medical journal The Lancet.
Little wonder spending during the final year of life amounts to 27.4% of Medicare’s budget, according to a 2001 study published in Health Affairs. We haven’t encountered more recent research, but we have no reason to believe the percentage is any lower now.
Then there’s the matter of the high cost of drugs often used in that final year of life — drugs that often cost far less in other countries. But we’ll have to leave that for another time. Still, an interesting chart, no?

“Re changes to money market funds,” a reader writes after yesterday’s episode, “you failed to mention that the changes you outlined only affect institutions and not individual investors (so far). Seems like a pretty important tidbit to leave out.”
The 5: We’ll cop to the omission… but it doesn’t change a thing about our analysis or the guidance that follows from it.
If money is flooding out of institutional money market funds, it means bad things for the assets in those funds — corporate paper, foreign government debt. Those are the same assets that back many retail money market funds.
As far back as 2011, we were telling readers their cash position should be in Treasury-only money market funds, or T-bills themselves. The changes we described are only making that guidance more urgent.

“I have read in several issues of The 5 about the G-20 meeting on Sept 4,” begins today’s mailbag.
“Is it coincidence that this meeting is set on a Sunday before Labor Day, knowing the U.S. markets will be closed the next day?”
The 5: Interesting.
There’s recent precedent for a body of world leaders springing a surprise on markets during a U.S. holiday. Leaders of OPEC nations decided not to cut oil production at a meeting on Thanksgiving Day 2014.
Crude prices had already fallen from $110 to $74 over the preceding five months… but that decision cemented the persistently low oil prices we’ve experienced since. This morning, a barrel of West Texas Intermediate is back below $42, despite the aforementioned dollar weakness.
Best regards,
Dave Gonigam
The 5 Min. Forecast
P.S. So back to the events we anticipate Sept. 4: We anticipate the following factors undermining the dollar’s long-term health will start to come together…

And then 26 days later, on Sept. 30, major changes to that “world money” become official.
“By my best estimate, what’s coming will go down around 4 p.m.,” Jim Rickards says. “And when it does, you’ve got no idea yet how radically this could end up impacting your financial safety.”
If you’re not yet clued in to the full story, we urge you to get up to speed right here. After all, September is next month. And only three weeks remain here in August.