Watch out for the Three E’s

Hmmm… As the week stumbles to a close, the Dow industrials have slipped 100 points for no obvious reason. Disappointment the new Metallica album will be spread across two discs but could fit onto one?
MarketWatch gave it the ol’ college try, claiming “investors wrestled with the possibility that the Federal Reserve could move to raise interest rates soon.” Which might make sense if anything were different on that score today compared with yesterday… but it’s not.
Maybe — we’ll just throw it out there for the hell of it — there’s a collective realization that nothing’s happening either with corporate earnings or the economy at large to justify the major indexes sitting near all-time highs.
We’ll take it a step further. If our hypothesis is correct — actually, even if it’s not — you stand the chance to rack up a triple-digit gain over the next three months…

So that’s earnings. What about the economy? Going by the admittedly flawed measure of GDP, it was running 2.9% in the 12 months ended September 2014. For the 12 months ended in June, 1.2%.
Even more revealing is total business sales — encompassing manufacturing, wholesale and retail. “Business sales are the big enchilada,” says David. “They capture a reasonably accurate picture of the current pace of economic activity.”
The annualized figure in June was $15.7 trillion — down 3.4% from the peak two years ago. “That’s a sharp deterioration from the 5–10% annual rates of gain during the initial years of the recovery.”
Then there’s the movement of goods — also slowing noticeably… 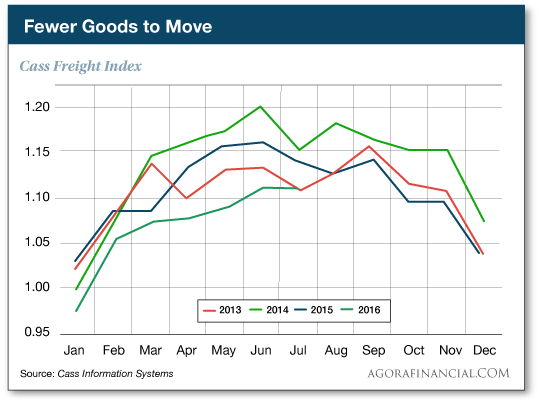 “We believe these weak business sales and freight volume trends are an especial threat to the market’s current lofty valuations,” David sums up.
“That’s because on a market cap-to-sales basis, the S&P 500 is now in wholly uncharted waters. In fact, at nearly 2.5 standard deviations higher than its historical median, it now towers far above even the peaks reached in 2000 and 2008.
“Consequently, if business sales continue to falter and margins continue to compress, the stock market is vulnerable to a drastic downward re-rating of valuation multiples.”

The economic and earnings picture becomes even more alarming amid the backdrop of an especially nutty election cycle.
“Trump vs. Hillary is the most uncertain presidential election since 1912,” says David, “when Teddy Roosevelt started the Bull Moose Party.
“And this uncertainty is going to cause A LOT of market volatility and losses for investors — maybe you — in the next few weeks. But that won’t be the case if you understand this one proven election season secret.”
David has seen this secret at work, firsthand, during his time both as a Washington insider and an investment banker. Every four years, the political and financial insiders seize on a unique confluence of circumstances made possible by a presidential election.
Democrat or Republican, incumbent or lame duck, it doesn’t matter. The opportunities are there, going back to when David was a wet-behind-the-ears candidate for the U.S. House in 1976, not yet 30 years old.
David will reveal this secret during a live online event next Thursday, Aug. 25, at 7:00 p.m. EDT.
It won’t cost you a thing to watch, and you can submit questions during the event. All we ask is that you send us your email address so we know how many people to expect. More details and signup information at this link.

As the day wears on, the major U.S. stock indexes are recovering some of the early-day losses. The Dow now stands at 18,558.
The other major asset classes are likewise little moved, the 10-year Treasury yield at 1.57%, gold at $1,346 and crude at $48.20.
There are no major earnings numbers or economic figures or — thank God — speeches by Federal Reserve pooh-bahs today. But if there were speeches today, would anyone even pay attention?

“Absolutely no one cared,” says Jim Rickards of the “minutes” from the Fed’s July meeting, released on Wednesday.
“The minutes conveyed some division, and reporters dutifully described how some FOMC members thought a rate hike in the near future was a strong possibility.
“Normally, a rate hike would mean a stronger dollar, lower gold prices and higher interest rates. Instead, the dollar weakened, gold rallied and yields fell. When markets do the exact opposite of what the Fed was implying, it means the Fed has no credibility.
“Our analysis says that there will be no rate hikes until December 2016 at the earliest and probably 2017 at this point. The weak dollar, strong gold and strong euro trends will continue.”

Is it the dividend that Warren Buffett likes about Apple?
That’s what crossed our mind this week seeing Berkshire Hathaway’s latest 13-F statement filed with the government. It says BRK upped its stake in Apple by 55% during the second quarter — a stake that didn’t even exist until this year.
Granted it was one of Buffett’s portfolio managers who made the initial buy… but it’s still interesting.
“Mr. Buffett is famous for his unwillingness to have his company Berkshire pay shareholders a dividend,” says Agora Financial contributor Jody Chudley. “He believes that he can still reinvest that money on behalf of shareholders at higher rates of return than they can themselves after paying tax on a dividend distribution.”
That said… he almost surely enjoys collecting dividends from the companies in BRK’s stable.
“If you take a look at the six largest positions in the Berkshire Hathaway portfolio,” Jody says, “you will see that growing dividends is a constant theme.” That’s each of his Big Four — IBM, Coca-Cola, American Express and Wells Fargo, plus Kraft and Phillips 66.
“These six positions represent an incredible 75% of the Berkshire Hathaway portfolio. All of these companies have growing dividends. The yields today aren’t huge, but as with Coke, that doesn’t tell you anything about how much those dividends will grow over time.”
Coke is instructive. Buffett bought in 1988, when Coke’s dividend was 7.5 cents a share. Now it’s $1.40. “Every two years,” says Jody, “Berkshire now receives dividend income that equals the entire giant lump of cash that was invested in Coca-Cola in the first place.”
As for Apple, a Lifetime Income Report pick, the yield is a little north of 2% now. And the share price is up 21% over the last three months.

Once again, Uber is leaving bureaucratic busybodies in the dust.
Yesterday, as Uber announced plans for self-driving Volvo SUVs to hit the streets of Pittsburgh before month’s end… we pointed out that Uber started hatching its plans shortly after the Pennsylvania Public Utility Commission lowered the boom on Uber for having the temerity to open up shop without first seeking permission.
The Pittsburgh Business Times asked the commission for reaction to the self-driving car news. Said a spokesman, “The PUC did not receive any advance notice from Uber regarding today’s announcement, but we have requested Uber provide detailed information regarding their planned use of self-driving vehicles, and the PUC will be carefully reviewing that information as part of our commitment to safeguarding the traveling public.”
Heh… Nothing like watching commerce outrun the regulators…

“Recently,” a reader writes on the topic of driverless cars, “I was driving on a four-lane highway during a torrential downpour with a transport truck beside me.
“In the future, in these situations, not only will I have to navigate the weather conditions, but I will also have to be on the watch for driverless cars that go haywire because their system gets overloaded from the incoming data.
“I also live in Canada and frequently have to drive in snowstorms. How will a driverless car know where the road is if it cannot be seen? The legal profession must be licking their lips.”
The 5: We hear you. But on the other hand, you don’t think Uber (and Google and Ford, which have their own driverless car initiatives) isn’t aware of the liability potential?
Again, that’s why Uber’s autonomous cars will all have engineers behind the wheel at the outset. Uber knows there are many bugs in the system, starting with bridge crossings.
It’s hard to wrap one’s mind around right now. But it’s also early days…

“I found it amusing,” a reader writes, “that one angry Democrat subscriber threatened to unsubscribe because of your perceived bias toward Trump.
“Since, especially after their latest convention, it is obvious that the average Democrat voter embraces full and complete dependency of the masses on an elite and all-powerful (and above-the-law) ruling class, one wonders why any Democrat would subscribe to any publication that espouses the concept of liberty through wealth? It flies in the face of everything they believe in.
“Yes, just fanning the flame…”

“I’ve been reading your stuff since I signed up with you,” a reader writes us after seeing Jim Rickards’ latest exposé. “I have to say some things are good…”
[We know where this is going; we’re glad to see new readers catch onto the drill so quickly…]
“… BUT it seems like all this gloom and doom is a little over the top!
“This alone makes me really consider dropping out of your program. You did happen to notice that there is no talk about this anywhere else but here?”
The 5: We don’t traffic in ideas that everyone else is talking about. If everyone else is talking about them, they’re not something you can act on and profit from.
As we said earlier this week, we ask our editors to put their asses on the line, making big and bold calls. Not because we want them to stand out for the sake of standing out, but because big gains usually come from what the crowd doesn’t expect.
So no, no one else is talking about what Jim Rickards is talking about. By the time they start, it’ll be too late.
Best regards,
Dave Gonigam
The 5 Min. Forecast
P.S. “Times of market volatility are the best way to make big gains in financial markets,” says the aforementioned David Stockman, anticipating a rough election campaign as summer turns to fall.
He’s seen it happen in the last 10 presidential election cycles, going back to Ford vs. Carter in 1976.
And next week, he’ll show you a proven technique to make it work in your own portfolio. “If you use it before Sept. 26, you could potentially see gains as high as 150%, instead of losing money.”
Let David walk you through this technique during a FREE online event next Thursday evening at 7:00 p.m. EDT.
All we ask is that you sign up in advance, so we can set aside enough server capacity to accommodate everyone. Here’s where to go.