If this chart demonstrates signs of “life” in the U.S. factory sector, we hate to wonder what it would look like in a comatose state: 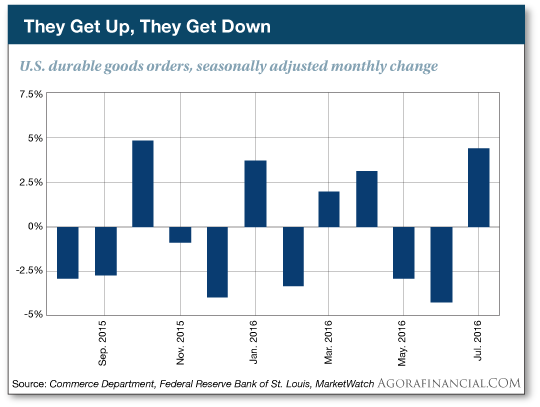 This is a chart of the monthly change in orders for durable goods — a category encompassing everything from dishwashers to diesel generators, anything designed to last three years or longer. The July number was released this morning.
From this chart, Bloomberg deduces, “The factory sector, after a frustrating first half of the year, is now definitely showing life.”
We’d call that “a reach,” but really, that understates the case. Whoever wrote that probably needs rotator-cuff surgery now.
As we’re wont to say, one month does not constitute a trend. Three months is another matter, though. In the internals of the durable goods report, we find shipments of “core capital goods” — business equipment and machinery — fell 0.4%. That’s the third consecutive drop. For anyone who cares, that doesn’t bode well for tomorrow’s latest estimate of GDP.
In recent days, we’ve been regaling you with some lesser-known but highly revealing economic indicators — things like freight shipments on the roads and rails (worst since 2013) and the ratio of business inventories to sales (rolling over from cyclical highs, as they did during the dot-com bust and the credit crisis). From where David Stockman sits, they’re the early signs of a new recession.

As long as we’re on a roll, here’s one more — one that puts the “housing boom” of recent years into proper perspective.
It also puts the lie to Tuesday’s new home sales figures, which were the highest since October 2007.
“Permits for new single-family dwellings during July — a leading indicator of future housing construction — were down 6.1% from 2015,” says Mr. Stockman. “This compares with 10– 20% gains during the last several years.
“Moreover, the fact that even the housing ‘recovery’ is reaching exhaustion is especially telling. That’s because it never really recovered from the thundering crash of 2008–10 in the first place.”
Heh… Last month’s figure was lower than levels of 1960, when the U.S. population was 44% smaller than it is now. 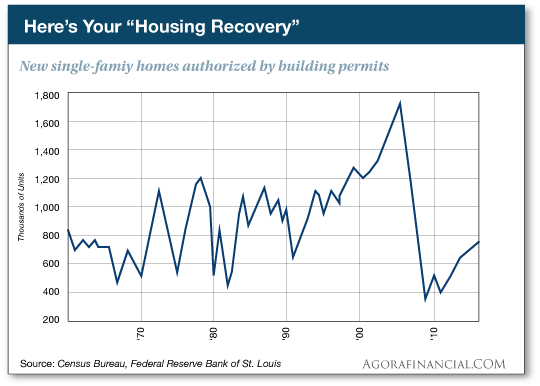 “The housing sector,” David sums up, “has time travelled backward by half a century.”

“The Fed can generate massive bubbles, and it can delude people into thinking it knows what it’s doing,” David said in a recent podcast interview with another of our editors, Michael Covel.
“Well, the problem with that is it seems to work for two, three, four, five years running, maybe even in seven-year cycles. That’s what happened from 1994–2000 and then the whole dot-com thing burst. Then we had another seven-year run and another huge markdown [in 2008]. And we’re about ready to have another reset.”
And just as happened during the credit crisis of 2008 and the dot-com bust of 2000, there’s the added wild card of a lame-duck president and a fiercely contested election for his successor.
“In the next few weeks,” he says, “an election event will take place. It could trigger major volatility, ending in the market crash I’ve been warning about.”
By the same token, there’s a unique window of opportunity to prepare for — and maybe profit from — what he sees around the corner.
Only hours from now, David will clue you in to a strategy that’s consistently generated triple-digit gains during election cycles — even when the market is in free fall. He’s hosting an exclusive online briefing, live from his home in Aspen.
You can watch this briefing free of charge tonight at 7:00 p.m. EDT. Or if that’s not a convenient time, you can watch a replay later. Either way, all you need to do is submit your email address at this link and we‘ll guarantee you a spot.

The major U.S. stock indexes are once again drifting on a late summer day. The Dow is up fractionally at 18,493, after registering a modest drop yesterday.
Treasury yields are flat, the 10-year note at 1.56%. Gold is holding its own after yesterday’s drop, at $1,323.
The next potential market mover comes tomorrow, when Federal Reserve chief Janet Yellen delivers her latest Very Important Speech during the Fed’s annual confab in Jackson Hole, Wyoming. Gee, we can hardly wait…

Don’t say we didn’t warn you — the bait-and-switch corporate tax “jubilee” of 2016–17 is gathering speed.
“When Congress convenes with a new president in the White House after this year’s election,” says this morning’s Financial Times, “a rare point of common ground between the two parties will be the need to reform the U.S.’ taxation of international business.”
As you might be aware, many U.S.-based giants like Google, Microsoft and Cisco are sitting on huge piles of cash held overseas, the better to avoid America’s highest-in-the-world corporate tax rates. We spotlighted the phenomenon last April.

This week, the chatter in Washington is gaining a new sense of urgency, thanks to a tussle between the European Commission and Apple.
Apple has parked $200 billion of its cash offshore, much of it in Ireland. Now the Eurocrats in Brussels are jealously eyeing that money, hoping to skim off a bit for themselves. They’re accusing Apple of underpaying European taxes for years.
Hilariously, the U.S. Treasury is leaping to Apple’s defense. In a statement yesterday that the financial press describes as “rare” and “strongly worded”… Treasury said the European Commission’s antitrust unit is overreaching its bounds and trying to become a “supranational tax authority.”
That’s rich. While European companies are taxed on a territorial basis — based on where the income is earned — American firms wind up paying far higher rates if they bring their foreign income home. That’s why Apple has a $200 billion pile of offshore cash in the first place.
Anyway, we’re confident “corporate tax reform” will come about sometime next year and American corporate giants will “repatriate” all that offshore cash.
Then comes the bait-and-switch. Check out our warning from last April and mentally file it away. We’ll be coming back to it regularly between now and maybe 2020.

Meanwhile, the taxation zombie known as the online sales tax is once again lumbering about Washington, D.C. — but in a new set of clothes.
The 5 has been on the case since 2011, when the chatter first started getting serious in Congress. A measure passed the Senate in 2013 but died in the House. It would have imposed a sales tax on whatever you buy online, based on where you live.
Now Rep. Bob Goodlatte (R-Virginia) has stepped forward with a revised proposal. This one’s worse, because it’s more complicated.
“Sales would be taxed according to the tax base of the retailer and a single tax rate chosen by the consumer’s state,” says The Wall Street Journal, citing a congressional aide. “So for example, an Ohio company shipping a pair of pants to Maryland would use Ohio’s rules for taxing clothing and Maryland’s tax rate.”
Clear as mud, huh?
Like previous proposals, Amazon would be a likely winner. Oh, sure, as the king of online retailers, it would have to impose sales tax on far more transactions than it does now. But as pointed out five years ago, the firm has developed proprietary software it would love to sell to other online retailers who couldn’t otherwise sort out the 9,600 sales tax rates that apply to Americans based on where they live.
We’re sure a few tweaks of the software would accommodate Rep. Goodlatte’s proposal. To be continued…

“Dave, I apologize if I opened a can of worms last week when I stated that the 16th Amendment to the U.S. Constitution is unconstitutional,” begins today’s mailbag. (Well, as long as we have taxes on the brain…)
“According to every constitutional scholar and libertarian I’ve read, however, it flies in the face of what the Founding Fathers stood for.
“The authors of the Constitution may have been a bunch of blueblood aristocrats. But they clearly opposed big government and big taxes on every level, for several reasons.
“Together, the 16th Amendment and Federal Reserve enable our government to fund its monstrous deficit spending and war machine. Income tax and inflation are the means by which it achieves these goals. To students of history, it’s not surprising that the system is bloated beyond all recognition as a result.
“So my question to the reader who groused yesterday is if this amendment is consistent with the letter or spirit of our Constitution, why was it necessary?
“Thanks again for all the great work you and your team do!”
The 5: No apology necessary; The 5 would be a less lively read if we didn’t have readers stirring the pot.

“Back in the day,” writes a reader mashing up our taxes thread with our rock ‘n’ roll thread, “Joan Baez attempted to pay only 60% of her taxes because the defense budget was 60% of the total U.S. budget and she was anti-war.
“Final score: IRS 100%, Joan Baez 0%.
“Joan learned the truth of John Cougar Mellencamp’s ‘Authority Song’: Authority always wins!”

“Alas! Frank Zappa” writes one of our long-timers after another reader cited him yesterday.
“Absolutely, hands down the most underrated, ahead of his time, by far most talented and brilliant musician, artist, conductor and showman of all time thus far!
“Thank you for immortalizing the guitar god. He deserves it, and so much more. Long live Frank Zappa! (‘Legend’ is an understatement)”

“Why, yes,” a reader writes after Tuesday’s episode, “I did catch the Dream Theater reference.
“The song ‘Strange Déjà Vu’ is from the album Metropolis Part 2: Scenes From a Memory. DT is one of my favorite bands.”
The 5: Likewise for your editor. SFAM, as it’s known to the fanbase, would be among my 10 “desert island discs,” in fact.
There’s a subtle reference to another of my favorite recordings tucked into today’s episode, early on. Anyone spot it? [Hint: DT opened for them a few years back.]

“Yesterday’s chart titled ‘Danger Ahead’ was very interesting,” writes our final correspondent.
“It looks to me like it is forming a head and shoulders pattern, which, if I am correct, is a bearish pattern. Hmm.
“Thanks for the 5 Mins. of great tidbits of all variety.”
The 5: You’re welcome. For the record, David Stockman doesn’t rely on technical analysis… but we can see how it would reinforce his conclusions.
Best regards,
Dave Gonigam
The 5 Min. Forecast
P.S. Last call: If you want access to David Stockman’s strategy to sidestep election-season volatility and bag up to 510% gains, you need to sign up now.
The event is tonight at 7:00 p.m. EDT. You can ask questions while it’s in progress. If you can’t attend live, a replay will be available later.
Either way, there’s still time to RSVP. Here’s where to go.