One Stupid Speech and One Insane Chart 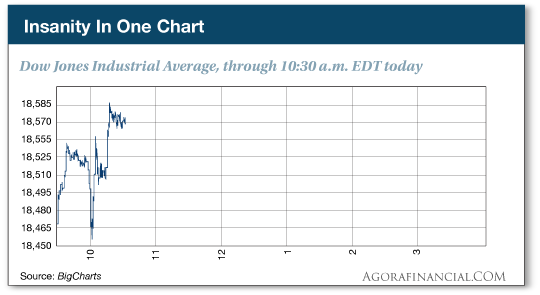 As you might be aware, Federal Reserve chief Janet Yellen is delivering a Very Important Speech in Jackson Hole, Wyoming.
We’ll get into the content of her speech shortly, to the extent it matters. What matters more is how the players of the Wall Street “casino” — as David Stockman is wont to call it — reacted to the speech.
They did not watch the speech in real-time when it began a half-hour into the trading day. They did not issue buy and sell orders based on what she said moment to moment… or on the tone of her voice… or whether she arched an eyebrow one way or another.
That would be insanity enough.

What actually happened was even more insane.
The Fed released a transcript of the speech at the moment Ms. Yellen was set to begin delivering it at 10:00 a.m. EDT. So that instantaneous 75-point drop, followed immediately by a 90-point recovery, occurred because traders were drawing conclusions and acting on them by skimming the transcript… or maybe performing a keyword search.
[That’s assuming no one got an early copy of the speech to trade off of before 10:00 a.m. — a questionable assumption in light of previous claims about Fed leaks.]
So what matters more than anything Yellen said is the seat-of-the-pants, act-first-think-later reaction to it.

If a chart of the Dow looks like an unstable EKG on account of a stupid speech, what happens in the event of a genuine market shock? When something occurs that massively violates expectations?
Case in point: This morning a Quinnipiac poll gives Hillary Clinton a 10-percentage-point lead over Donald Trump.
While we detest the horse-race aspect of mainstream media election coverage, we ignore it at your financial peril. David Stockman made that point here on Tuesday. “On Sept. 26, Trump and Hillary will have their first presidential debate,” he said. “The results of this debate could blindside the market because at the moment, Hillary Clinton is considered to be a shoo-in.”
Few remember now, but the 1980 race between Jimmy Carter and Ronald Reagan was fairly close starting in late August… and continuing until the lone debate between the two on Oct. 28.

Between “There you go again” and “Are you better off now than you were four years ago?”… the rest was history.
“I saw what can happen when a candidate finally gets the pulse of the country and scores big in the presidential debates,” says David — who played the part of Jimmy Carter during Reagan’s debate rehearsals.
What’s to say Trump can’t hit his stride again? No, that’s not guaranteed, but that’s not the point. The point is that unexpected events during election season can turn markets upside down… and deliver big short-term profit opportunities.
In 1980, a small cadre of financial pros booked gains between 93–177%. Similar opportunities turned up in every presidential election David’s experienced during his long career both in Washington and on Wall Street.
Last night during a live event hosted from his home in Aspen, David showed readers how to achieve similar gains this year. If you missed it, you have a brief window of opportunity to watch the replay. We’ll leave it posted online for the next 24 hours, so you’ll want to be sure to give it a look as soon as possible.

Oh… the speech itself, you wonder?
Here’s the key passage. “The FOMC continues to anticipate that gradual increases in the federal funds rate will be appropriate over time to achieve and sustain employment and inflation near our statutory objectives. Indeed, in light of the continued solid performance of the labor market and our outlook for economic activity and inflation, I believe the case for an increase in the federal funds rate has strengthened in recent months.”
So a rate increase on Sept. 21 is still “on the table” — even though it would shock the markets mere weeks before the election, which is the last thing Yellen and the other Democrats on the FOMC want.
Got it. Whatever you say, Janet…

As the day wears on, the Dow is down a 10th of a percent from yesterday’s close… while the S&P 500 is up a quarter percent. Treasury rates are inching up, the 10-year at 1.57%.
Gold’s movement has been even nuttier than that of stocks. The bid shot up $10, to $1,340, when the speech transcript was released… but it quickly climbed down over the next couple of hours and at last check is near where it was this time yesterday, $1,322. To a degree, that’s a function of dollar strength; the dollar index has been bid up to 95.1.

Now for another key passage from Yellen’s speech. In fact, this sentence immediately followed the one we shared above — the one that left the impression a September rate increase is still a live possibility.
“Of course, our decisions always depend on the degree to which incoming data continues to confirm the Committee’s outlook.”

The Commerce Department’s latest guess at second-quarter GDP does not “confirm the Committee’s outlook.”
We look at GDP the same way we look at election polls. It’s meaningless in the scheme of things — GDP is a statistical abstraction with zero relevance to your quality of life — but other people think it matters greatly, so we can’t ignore it.
This second estimate rings in at an annualized 1.1%, down from the first estimate of 1.2%. Whatever strength is to be found in the number is in consumer spending — up an annualized 4.4%.
But if you’re one of those fuddy-duddies who thinks real prosperity comes from investment and not from people buying crap they don’t need with money they don’t have… the numbers aren’t nearly as encouraging. “Nonresidential fixed business investment” is down an annualized 0.9%.

Reality check/quote of the day: It comes from colleague Nomi Prins — recovering investment banker, prolific author and contributor to Jim Rickards’ Strategic Intelligence.
Next time you see anything about the Fed analyzing economic data, just remember this gem from Nomi…
“If they [the Fed] were on the Titanic while the lifeboats were filling up, they would have huddled in a corner on deck to contemplate whether the temperature was really cold enough to have produced an iceberg of that magnitude.”

Say this much for the Fed: Its most substantial effort at “public outreach” in five years worked out better than the last one.
Two weeks ago, we told you about a protest group called Fed Up that booked a block of hotel rooms at the Jackson Lake Lodge so they could be a presence during the Fed retreat. But their reservations were cancelled on account of a “computer glitch.” The protesters had to stay a half-hour away. 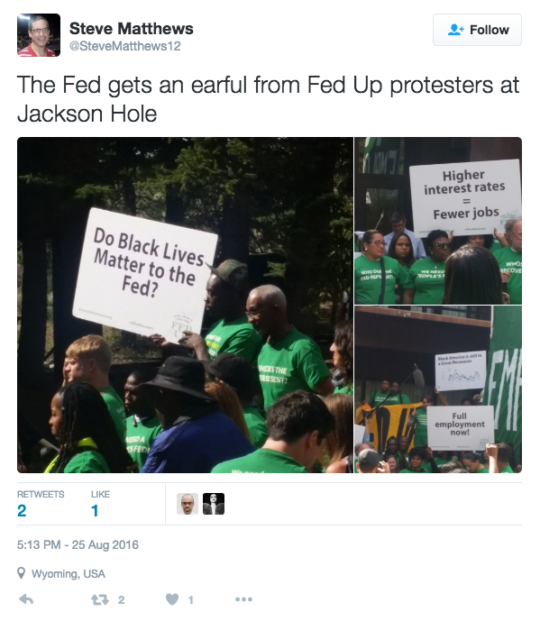 But lo and behold, 11 top Fed officials met with the group yesterday. “The Fed’s decision to hold the meeting with activists reflects a need not to appear out of touch during a presidential election year when there is growing pressure from both sides of the political divide,” said the Financial Times.

Yellen wasn’t among those 11 Fed leaders, but the influential New York Fed President Bill Dudley — “B-Dud” to David Stockman’s readers — was.
Someone at the Fed must’ve hired a public-relations coach for Dudley… because he managed not to step in it the way he did so infamously in 2011.
Longtime readers might remember it well: He was meeting with everyday New Yorkers and told them inflation was no problem because the new iPad was better than the old one but no more expensive. Said a voice in the crowd, “I can’t eat an iPad.”
Alas, the meeting yesterday delivered no comparable yuks. In part that’s because the activists — while they have valid grievances — are terribly confused. They say they’re frightened the Fed is on the verge of raising rates to combat a nonexistent inflation threat, which would hurt the working poor. “I don’t want to be sacrificed in your war against an inflation enemy that isn’t here,” said a fellow from Minneapolis.
As we said two weeks ago, rising rates are the least of the working poor’s worries caused by the Fed…

“YES, I did recognize it!” a reader writes after our oblique musical reference in a chart yesterday. It was from “Close to the Edge” by Yes.
“‘I get uuuuuuuuuup, I get dooooooouuuuuunnnn.’ Follow up with that sweet pipe organ, please!” the reader enthuses. “Big Dream Theater fan also, by the way.”
The 5: Well done.
We see that Yes is once again cleaving into two competing bands this year, as it did in the late ’80s. Judging from a recent interview with Jon Anderson, it won’t descend into litigation over the name this time.
Meanwhile, a brief emendation: Joan Baez, according to her website, sought to pay 40% of her income tax liability starting in 1964 because she figured 60% of federal spending was on the military. But regardless of the percentages, the IRS prevailed.
Which brings us to our final correspondent today…

“Beg to differ on ‘Even if you’re right, the feds have more guns and power than you do.'” — which we said Wednesday on the subject of those folks who think they’re not legally obligated to pay income taxes.
“It’s true that the feds have more guns and power than a single person, which is why they get away with extorting illegal taxes, one taxpayer at a time. The states, however, have nullified marijuana prohibition, gun prohibition, civil asset forfeiture, eminent domain, REAL ID and many other power-grabs. We can resist them, easily.
“They don’t have more guns and power than their employers: all of us, together. We’re already paying them less, and once the central bank ruins the currency, everything will change, since they will no longer have any way to buy votes with goodies. There’s a reason why Gary Johnson is polling in double digits.”
The 5: We’re not sure where you differ with us. We meant our remark on the individual level — which is where most of these “16th Amendment is invalid” battles are waged, never successfully.
We love the concept of withdrawing your consent to be governed by a regime that’s overstepped its authority. Étienne de La Boétie waxed eloquent on this theme during the 16th century, in his Discourse on Voluntary Servitude. It’s a short and worthwhile read, available from many online sources at no cost.
But implicit throughout La Boétie essay is that withdrawal requires mass action. Unless you’ve got large numbers of people backing you up, you’re going to lose every time.
State-level nullification? We’re all for it.
You’re also right about how it’s going to take the central bank “ruining the currency” before anything can meaningfully change. Elections sure as hell won’t do it…
Have a good weekend,
Dave Gonigam
The 5 Min. Forecast
P.S. If you want to learn about a strategy that can capitalize on election-year uncertainty for triple-digit gains in a short time… you must watch the replay of David Stockman’s live event last night.
But the window of opportunity in which you can act and seize maximum gains is closing quickly. We’ll leave the replay on our servers for the next 24 hours. Beyond that, no guarantees. Here’s where to watch.