Aaaand… the Dow is off to the races again. At last check, the Big Board was up more than 100 points.
Swings both up and down of 100 points or more have been the rule going back to a week ago Friday — when the market fell out of bed and the Dow tumbled nearly 400 points. Only two days earlier, Jim Rickards warned us the market was about to turn more volatile. Paying subscribers of Rickards’ Intelligence Triggers are up 19% in two weeks on his recommendation.
Today, however, we want to draw your attention to another strategy you can use to make volatility your friend. You can use it over and over again to pocket hundreds of dollars. 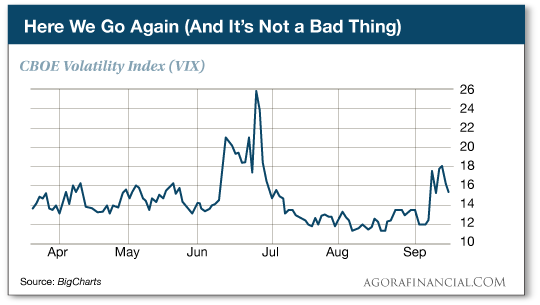 “Not all volatility is bad,” our income specialist Zach Scheidt said here last year. “If I wrote to you next week and told you that one of my recommendations was up 50% over a week’s time, would you write me an email about how ‘risky’ this position was and how you were disappointed with the volatility?
“No way! You’d probably be tickled with your return and possibly sell half of your position to lock in profits. Maybe you’d even take your spouse out to dinner or book a round of golf with a buddy to celebrate.

“I love volatile markets,” Zach enthused. “The income we can potentially produce in these environments is enormous.
“When I began managing money at a $130 million hedge fund shop in Atlanta, I learned about a unique investment strategy that captures instant income payments tied directly to volatility in the stock market. We used this strategy time and time again to make money for our wealthy clients.”
Applied properly, this strategy can be safer than investing in plain ol’ stocks.
“My ‘perpetual income strategy’ is simple, and it allows us to collect income from speculative bets aggressive traders make,” Zach goes on. “Essentially, when these traders place bets on how far a particular stock could move, they’re required to place a ‘deposit’ to secure their bets. Our strategy collects these ‘deposits’ in the form of instant cash payments in our accounts. That’s right, instant.”
Hold that thought about those “deposits”…

There’s no better time than now to begin applying this strategy.
“The VIX moves higher when investors are fearful,” says Zach, bringing us back to that chart above. “And that makes sense, because after weeks of quiet trading, stocks have been moving lower.
“When market volatility increases, these speculative traders are required to put down even higher deposits. So in volatile market environments, our instant income payments actually increase in value.”
Back in late June and early July — when volatility spiked after the “Brexit” referendum in Great Britain — Zach’s readers had the chance to collect instant payouts of $320… $240… and $300. His next recommendation is due tomorrow.
If you want to learn more about this strategy, there’s no one better to show you how it works than our publisher, Joe Schriefer — who’s been using it in his own portfolio for years. He recently conducted Phase 2 of our infamous “social income experiment” to show you how easy it is. If everyday folks at a bowling alley can pull it off in a matter of moments, so can you. Click here for the proof.

Treasuries and gold are holding their own even as stocks are rallying.
The 10-year T-note yield is steady at 1.70%. Gold has added three bucks, to $1,313. The big mover is crude, up more than 2% and knocking on the door of $44. Yet again, rumors abound of an OPEC agreement to limit oil production. Who knows, one day those rumors might even pan out.
The lone economic number of the day is a wacky outlier in light of other mediocre figures lately. The Housing Market Index — a sentiment survey from the National Association of Home Builders — clocked in at its strongest reading in 11 months. Within the index, anticipation of future sales is now the strongest since October 2005. Hmmm….

It’s the aftermath of the 2000s housing bust that could set the stage for the next financial crisis.
Last week, the Justice Department proposed $14 billion in penalties for the German banking giant Deutsche Bank. Like the big American banks, Deutsche’s U.S. arm packaged up poor-quality mortgages into securities and passed them off to unsuspecting investors as safe income generators.
OK, so that’s an opening gambit in the dance that goes on between the regulators and the regulated. The final total won’t be anywhere near $14 billion. The problem is that even a settlement only half that amount “would exceed Deutsche Bank’s litigation provisions and strain its already thin capital cushion,” said Saturday’s Wall Street Journal.

“If there’s a financial institution with the power to crater the world’s economy like Lehman Bros. did, it’s Deutsche Bank,” our trend follower Michael Covel wrote his subscribers a month ago.
“Before its implosion, Lehman had leverage of debt-to-assets of 31-to-1. In comparison, Deutsche Bank currently has astounding leverage of 40-to-1.”
Negative interest rate policy in Europe is wrecking Deutsche’s ability to repair its balance sheet… and limiting its ability to raise cash. “It can’t sell its assets in illiquid credit markets and it can’t raise new capital.”
And in a financial world where everything is tied to everything else, the Big Four commercial U.S. banks — Citi, JPMorgan Chase, Bank of America and Wells Fargo — are highly vulnerable to a crisis at Deutsche Bank.
We’re nearly certain the “too big to jail” policy of the Obama administration — a chronic fear that pursuing the misdeeds of megabanks will tank the economy — will end with a mere slap on the wrist against Deutsche. And Deutsche might still go down in the next crisis anyway…
[Ed. note: In both up and down markets… through times of both calm and crisis… Michael Covel’s proven trend following strategy has been minting millionaires. And you can become one of them — using what he calls “The $1 Million Calculator.” See how it works right here — no long video to watch, either.]

Time to check the ledger of marijuana’s investment potential — it’s been a while.
On the plus side, we see more evidence that medical marijuana is stemming the epidemic of opioid painkillers. Researchers at Columbia University have found that in states that pass laws allowing medical marijuana, drivers become less likely to test positive for opioids after fatal car crashes. And there’s a substantial data set to work with by now — half the states permit medical marijuana to one degree or another.
On the minus side, we see drugmakers — to say nothing of the alcohol industry — fighting tooth and nail to prevent states from easing up on the wacky weed any further. That’s a familiar theme that for a long time made us reluctant to pursue marijuana as an investing theme here at Agora Financial.
Last week, a filing revealed a synthetic cannabis company is funding opposition to legal pot in Arizona. Now comes word that “a beer industry group made one of the largest donations to an organization set up to defeat legalization in Massachusetts,” reports The Intercept.
“The Beer Distributors PAC, an affiliate that represents 16 beer distribution companies in Massachusetts, gave $25,000 to the Campaign for a Safe and Healthy Massachusetts, tying it for third place among the largest contributors to the anti-pot organization.”
The good news is that even though federal regulators opted to keep marijuana classified as a “Schedule I” drug last month, Ray Blanco’s marijuana-themed picks in our FDA Trader service are in the green. Since recommendation four months ago, one is up 15% and the other is up 34%.

On the subject of a more recent Ray Blanco recommendation, a reader writes: “I don’t know at what price your subscriber bought, the one who was upset that you were wrong/early on the iPhone 7 wireless charging call.
“But I’m 24% up on the stock even in the nonaftermath of the nonevent from Apple.
“I think there were some provisos along the lines of ‘only bet money you can lose,’ ‘it’ll be a wild ride,’ ‘hang on tight’ and so on. So I sized my position small so the 79,000% growth would be great but I won’t get killed if it goes to zero, so I’m happy. Tell Ray to keep up the good work!
“Oh, yeah — I dare you to print this.”

“I’m sorry, but I don’t want robotic transportation devices making critical decisions for me,” a reader writes on the persistent topic of autonomous vehicles.
“Absent from all the glowing reports about self-driving cars that I’ve read is any mention of time of arrival. The ‘just tell it where you need to go’ no doubt becomes quite a bit more complicated when you add ‘when you need to be there.’
“As for the gentleman who said the cars would be smart enough to keep ‘idiots’ from attempting to drive in two feet of snow, I’d like to be the judge of what might be important enough to cause me to attempt that feat. If I have a wife threatening to deliver twins and I have a four-wheel drive SUV, I want to determine whether I should try to go three miles downhill to the hospital.”

“So,” says another email replying to that same reader last week, “you honestly believe that autonomous vehicles will be programmed to not function in inclement weather.
“Then what is the point of having any type of vehicle if it is useless in storms? And please show me any software engineer who can predict storm behavior. As to ‘stupid’ people who go out in storms, has it ever occurred to you that, mayhaps, one must leave the confines of one’s home to assist an elder relative who no longer has power to his or her home? Has it ever crossed your dullard mind that maybe, just maybe, someone other than yourself might need help? Oy, indeed!
“Thanks for letting me rant. Love The 5.”

“You are not telling the whole story,” a reader writes of Zach Scheidt’s perpetual income strategy. (Did he anticipate we’d be writing about it today?)
“If a person sells a put option, they must have an account with margin money and can lose their shirt if the underlying stock or commodity goes down in price. I would call this deceptive advertising!”
The 5: Applied recklessly, any strategy will be enough to make you “lose your shirt.”
But among 169 closed plays over 3½ years, Zach’s application of the strategy has paid off 98.22% of the time.
Yeah, we know Agora founder Bill Bonner’s dictum about how numbers become more suspect the more decimal points you see. Fine. Round it off to 98%. That’s a risk level we imagine almost anyone would be happy to live with.
Best regards,
Dave Gonigam
The 5 Min. Forecast
P.S. As long as we’re addressing reader concerns about Zach’s perpetual income strategy, we’ll toss in the usual reminder about how it works best if you’ve got at least $20,000 available to invest.
But if you can swing that, you can swing a “Two-Minute Tuesday” with a payout of $300 or more. Oh, yeah, tomorrow’s Tuesday.