We can’t help wondering if Druckenmiller might have said the same thing 50 years ago.
The year 1966 marked the start of a brutal bear market. It lasted until 1982 — punctuated by regular sell-offs that would send the Dow Jones industrials plunging as much as 45%. 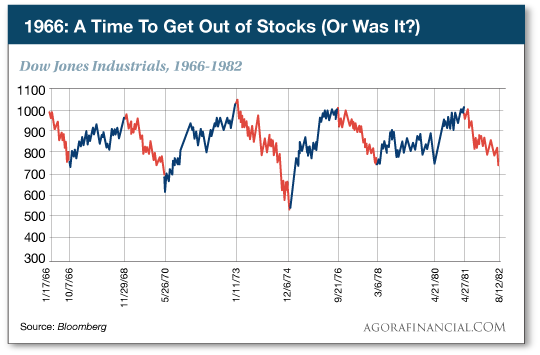 Factor in the inflation of the 1970s and the returns were even worse.
Druckenmiller was all of 13 years old when this bear market began, so presumably he had no opinion about stocks at that time. Or if he did, there’s no public record of it.

But even if Druckenmiller had said it was time to “get out of the stock market” in 1966… he’d have been wrong.
Beware sweeping generalizations about “the stock market” as measured by the Dow or the S&P 500.
“Unless you are a buyer of the index itself, it is not relevant to the business of finding great stocks today,” says our old friend Chris Mayer.
If you’re among our legions of newer readers, you should know Chris was part of the Agora Financial fold for more than a decade. During that time, he amassed the best track record in the newsletter business. And that’s not us saying so: An independent audit firm found he compiled 20%-plus annual average returns.
At the start of this year, he made the wrenching decision to jump to our affiliated firm Bonner & Partners, led by Agora founder Bill Bonner. But Chris’ latest project is so exciting — and so potentially lucrative — that we’ve pulled some strings and made it possible to give you free access — including six free stock recommendations from his current watch list.
More about that shortly. Right now, let’s get back to that “horrible” bear market of 1966–1982…

“I’m going to cite one piece of remarkable evidence I uncovered in my own massive study of the stock market’s biggest winners,” says Chris.
If you’re a longer-term reader, you might recall the “100-bagger” project Chris undertook a while back — researching every publicly traded company during the years 1962–2014 that turned a $10,000 investment into $1 million.
“Here’s what my research on 100-baggers found,” Chris tells us: “There were 187 stocks you could’ve bought between 1966 and 1982 that would have multiplied your money 100x. In fact, during that 17-year stretch, you’d have had at least a dozen opportunities each month to multiply your money 100x if you just held on.

“In some cases, you didn’t even have to wait very long,” Chris adds. Some choice examples from those 187 stocks…

“So the indexes can tell you what kind of environment you are in,” Chris sums up. “But they don’t predict what will happen to individual stocks.”

“All three were small companies with lots of room to grow,” Chris goes on.
“For larger companies, the condition of the economy can be a constraint. They depend on broad-based economic growth. It is hard for Coca-Cola or McDonald’s to grow faster than the overall economy. They’re just so big already.”
Of course, not every small company grows into a big one. But the ones that do have the ability to grow into national and global brands. Too, they have strong return on equity. ROE means if you invest $100 in a business and it generates a cash profit of $20, you have an ROE of 20%. Nearly all 100-bagger stocks had ROE of 20% or better.

But here’s what Chris says is the most important trait of all — “the ability to reinvest profits and earn high returns again and again.
“If you can earn 30% on your equity and reinvest your profits and earn 30% again… well, the dollars start to pile up real fast. After 10 years, you’ll have 14x what you started with. After about 18 years, you’ll have a 100-bagger.
“This is how you power through bad economic times.”
This coming Thursday evening, Chris will lead a brand-new investing master class. He’ll show you how to focus your portfolio on stocks that can return 100x your money. He’ll walk you through the blueprint he’s developed to find stocks like the examples we cited — long before Wall Street pays any attention.
To prove how effective his “Mayer Method” is, he’ll share six stocks from his watch list with you — so you can see for yourself if they behave the way he says they will.
This briefing starts Thursday evening at 8:00 p.m. EDT. And we’ve made it possible for you to look in on this event FREE. All you need to do is sign up at this link.

The major U.S. stock indexes are drifting higher today as the Federal Reserve begins its every-six-weeks policy meeting. As we write, the Dow is up a third of a percent, at 18,177.
Treasury rates are backing down, the 10-year at 1.67%. Gold is up a couple bucks, at $1,315.
The one economic number of the day is a stinker. Housing starts tumbled 5.8% last month, way more than the “expert consensus” was counting on. And permits — a better indicator of future activity — also missed expectations big-time, down 0.4%.
As for the Fed, Jim Rickards has been saying for months it won’t raise rates on this go-round. Nonetheless, traders will parse every clause of the statement the Fed issues at 2:00 p.m. EDT tomorrow and analyze every crack in the voice or furrow in the brow of Fed chair Janet Yellen as she conducts a post-meeting press conference. Ugh…

Now they tell us. “What if Obamacare was purposely designed to fail?” asks an MD from California named Jeffrey Barke, writing at the Beltway-insider newspaper The Hill.
Premiums are rising at a runaway clip. Insurers are abandoning the “marketplaces” that were supposed to make health insurance more affordable. “This vindicates the critics who have predicted these outcomes for years,” writes Dr. Barke.
If you’re one of our longtime readers, none of this comes as a surprise. “I believe Obama has specifically designed Obamacare to fall flat on its face,” wrote Laissez Faire Letter contributor Jud Anglin here in The 5 three years ago. “After my own extensive research and talking to people inside the industry and other experts, I believe it’s a certainty. The Affordable Care Act is nothing but a political stepping stone to get to a much worse system.”
Back to Dr. Barke today: “In the past six months, Democrats have renewed their calls for single-payer, the public option and a host of other government-driven solutions to health care.”
Because it’s our objective to stay several steps ahead of the mainstream, Jud is updating his research — just in time for the impending disaster of open enrollment on the exchanges next month (assuming it isn’t pushed past the election, heh). Watch this space for updates…

In the meantime, one attractive option for quality affordable health care remains closed off to Americans.
While refreshing our memory about Obamacare today, we came across this tidbit from three years ago in The 5’s voluminous archives — a for-profit company owned by the Cuban government that caters to foreigners.
Servimed, it’s called. As irony would have it, the target market is Canadians who think their “free” health care is something less than wonderful. “We offer the opportunity,” said Servimed’s English-language page, “to be seen and treated by qualified doctors without the delays that one would encounter while trying to visit a doctor in Canada.”
Services offered run the gamut from post-accident motor skills rehab to eye-disease treatment to plastic surgery.
For Americans and Cubans alike, this would be a win-win. All those Cuban doctors driving taxicabs could finally put their skills to work… and Americans would have an affordable health care option just a short flight from Miami.

But no. According to the State Department, there are only 12 categories of “authorized travel” to Cuba, no matter the headlines three weeks ago about the resumption of commercial flights between the U.S. and Cuba.
They are: “family visits; official business of the U.S. government, foreign governments and certain intergovernmental organizations; journalistic activity; professional research and professional meetings; educational activities; religious activities; public performances, clinics, workshops, athletic and other competitions and exhibitions; support for the Cuban people; humanitarian projects; activities of private foundations or research or educational institutes; exportation, importation or transmission of information or informational materials; and certain authorized export transactions.”
Medical tourism? Forget it. No visa for you. What are you anyway, some kind of commie?

Round and round we go on autonomous vehicles in the snow: “Both replies to my comments on AVs keeping idiots off the road argue with me by changing the facts and/or adding new ones to what was presented in the original email,” writes the fellow who got us started last week.
“I’ll give it one more go for each of these replies, just for fun.
“To the first gentleman who throws in new ‘facts’ about his wife being pregnant and wanting to make the decision himself if he could drive his SUV three miles down the road through two feet of snow to the hospital, listen carefully…
“You’re not going anywhere, let alone three miles through two feet of snow with any standard equipped SUV. What you will do is block the snow plows and emergency equipment, which will only make things worse, as I originally stated.
“To the second gentleman who asks what software engineer can predict storm behavior, and what about his elderly relative who needs help?
“The original assertion was that there were already two feet of snow on the ground and you couldn’t even see where the road was. Nothing to predict there.
“Secondly, as to assisting your elderly relative (if that is true, you have my sincerest sympathies and empathy), see my response to the first gentleman…
“You’re not going anywhere in two feet of snow unless you own a snowcat.
“If you really want a quandary for the software engineers, imagine this scenario.
“A school bus full of children loses its brakes while careening down a steep hill with cliffs on the side. Coming the other direction on the barely two-lane road is the presidential motorcade. One of them must be programmed to be driven over the cliff to spare the other.
“OK, on second thought, that one is pretty darned easy. Cheers!”

“Regarding the ‘golden throne’ at the Guggenheim,” a reader writes about the solid-gold toilet:
“You’re not really surprised, are you? We’ve all been expecting gold to touch bottom any day now.
[Insert “rimshot” here. Which, come to think of it, dovetails nicely with the subject matter…]
“As for the price, after looking up the weight of an average toilet and the relative densities of porcelain and gold, I’d guess the retail price would be at least $10 million — with additional charges for installation, of course.”
The 5: Subsequent media coverage has shed a bit more light. The weight of the toilet is between 70–120 pounds. (Why such a wide range? Alas, that’s left a mystery.) At $1,300 gold, at 18 karats, that would make the lustrous loo worth $1–1.7 million.
Best regards,
Dave Gonigam
The 5 Min. Forecast
P.S. One of our editors recently met a millionaire from the small town of Winder, Georgia.
Asked how he made his fortune, the man said he just punched a few numbers into an old Texas Instruments calculator.
Naturally, the editor thought he was nuts.
Then the millionaire pulled the calculator out of his pocket.
You won’t believe what happened next. Then again, seeing is believing. Click here to see it for yourself.