The Most Depressing Number In America Today

It’s come to this: Americans’ life expectancy is falling.
The Society of Actuaries has crunched the numbers and found that compared with a year ago, the typical 65-year-old has six fewer months to live.
Nor are the numbers any better for younger people. From a Bloomberg story that Drudge linked to this morning: “Baby boomers, Generation X and, yes, millennials are all doing worse.” 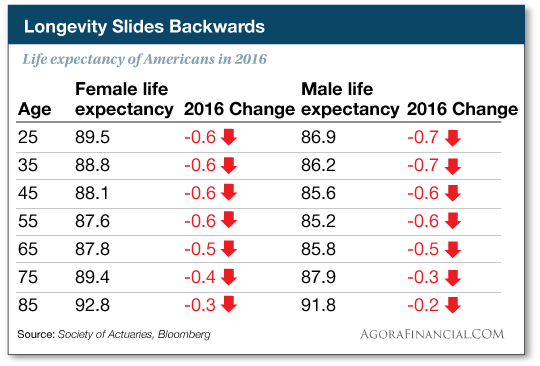 As we pointed out a year ago, research from Princeton found the death rate of white Americans age 45–54 with no more than a high-school education exploded between 1999–2014. The cause — suicides and substance abuse, especially alcoholic liver disease and overdoses of heroin and prescription painkillers.
Now it appears those numbers are dragging down longevity for all Americans — no matter their age or ethnic background…
Two years ago, your editor was already noticing life expectancy falling among Americans who never finished high school. We suggested this was part of “the awful way Social Security might be ‘saved.’” That is, less-educated low-income Americans would die before they could collect much in the way of benefits… while well-educated higher-income Americans would keep working and paying into the system well past Social Security’s “full retirement age.”
Grim stuff, we know. But we find solace — and a potential profit opportunity — in another Bloomberg story this morning…

Ballot measures in several U.S. states “are poised to expand the legal use of recreational marijuana to almost a quarter of the American population,” the story says.
We’ve been writing about these referenda much of the week — but that eye-opening figure is new to us. As always, California has an outsized influence.
OK, so what the hell is the connection to longevity, you wonder? Well, remember what’s dragging down the longevity numbers. It’s addictions — especially to booze, heroin and prescription painkillers.
“Serious pain drugs are a horrible trade-off — a deal with the devil,” says Ray Blanco of our science-and-wealth team. “You take the drug and your unbearable pain goes away — but you may end up addicted (just ask Rush Limbaugh or Brett Favre), homeless or even dead from an overdose.”
And as we pointed out last month… when Florida officials cracked down on prescription painkiller abuse, the result was a spike in heroin use, with heroin deaths rising 39% in a year.

But a “next generation” painkiller could change all that.
“I’m talking about a medication that could be just as effective as opioid-based pain drugs,” says Ray, “but without all of the nasty side effects.”
Ray is following the story of a drug — derived from cannabis — that’s onto just such a medication.
Imagine what could happen to the company behind that medication if voters pass these cannabis ballot measures 11 days from now. Not only is recreational marijuana on the ballot in California… but as we said yesterday, Florida is likely to become the first Southern state to authorize medical marijuana.
“I fully expect shares of this penny pot company to start to skyrocket by 500% or more following the election cycle on Nov. 8,” says Ray. And after more than six months of research, he’s identified three more companies with similar potential.
But as you’ve likely figured out, the time to act is before Election Day. You don’t want to wait long to check out Ray’s research. Click here to get started.

A “meh” week for U.S. stocks is ending on a “meh” note. As we write, the major indexes are all marginally in the green. The Dow rests at 18,231.
Treasury yields are nearly steady, the 10-year at 1.85%. Gold is holding its own at $1,271. Crude has risen and fallen all week as rumors of an OPEC production cut are confirmed and then debunked; a barrel of West Texas Intermediate is just under $50.
In earnings news, Google parent Alphabet delivered a “beat” on both profits and revenues. But Amazon missed: Its costs are soaring as it opens new warehouses and speeds up shipments, thus its quarterly profit is the lowest in a year. Traders don’t like it — they’ve sent its shares down more than 4% this morning.
Say what? For years, the Street was willing to forgive Amazon for paltry profits and even steady losses because Jeff Bezos kept spending gazillions on research and development to grow the company. What’s changed — other than the whims of “financial professionals,” that is?

The big economic number of the day will give space to the Federal Reserve to raise interest rates in December.
The Commerce Department regaled us this morning with its first guess at third-quarter GDP. It rang in better than expected at an annualized 2.9%. Heck, it’s the strongest reading in two years.
The number only affirms Jim Rickards’ certainty about a December interest rate increase. Add the GDP figure to the following…

As certain as a December rate increase is, so is a stock market correction.
Look back to last December, Jim says: “What happened the last time the Fed raised rates? The stock market fell 11% in seven weeks.
“Even when markets see a rate hike coming (futures give a December rate hike a 70% probability), there’s something about an actual announcement that’s like a bucket of ice water in the face. Stock markets will react strongly to the end of easy money, and the reaction will be negative.”
And as Jim mentioned yesterday, China’s “stealth devaluation” is another factor at work. “Look for the Chinese to cheapen the yuan in the months ahead at an accelerating rate. That has the potential to destabilize U.S. stocks, as it did twice before in the past 15 months.”

Toronto taxpayers can take comfort that the city’s bureaucrats are well-laid — er, we mean paid!
This week, the city’s auditor general released a report saying city workers were reimbursed $1.9 million for impotence-fighting drugs. There’s no coverage limit under the city’s health plan; 37 workers submitted claims for over $3,000.
Asked whether the rules should be changed or a fraud investigation should be opened, Mayor John Tory said, “It stiffens my resolve.” Then he thought better and said, “I shouldn’t use that word today.”
Mr. Tory has a long way to go before generating the entertainment value of his crack-smoking predecessor, the late Rob Ford — but this is a start.

And now, presented with no comment…
That was on Wednesday, after TSLA reported a profit.
For whatever it’s worth, San Francisco Chronicle crime reporter Evan Sernoffsky tweeted that “211” could well be a gang number.
Or is it a cry for help? “In many states,” says the Federal Communications Commission website, “dialing ‘211’ provides individuals and families in need with a shortcut through what may be a bewildering maze of health and human service agencies’ phone numbers.”

“So…. why is Spain’s economy growing so fast with no government in place?” a reader writes.
He points us to a story that says consumer spending and exports in Spain are looking strong in spite of an election stalemate that’s dragged on most of the year; no one in parliament can cobble together a majority. “Just asking,” the reader adds cheekily.
Good question. We also see British GDP grew 0.5% in the third quarter despite the dire end-of-the-world forecasts after the “Brexit” referendum in late June.

“Guys, I realize you lean libertarian, but I think you have some responsibility to remind or educate your readers about medical and health problems caused by marijuana,” a reader writes.
“Studies have shown that regular marijuana use (especially smoking) leads to lung disease, brain circulation problems and low testosterone and sperm counts in males. As a former medical professional and professor, these problems must be discussed. Investors in marijuana providers should also be aware of them.”
The 5: Inhaling any kind of smoke tends to be problematic over time, yes.
But we figure grownups are capable of making their own decisions. And as noted above, the company Ray Blanco is most keen on is developing a painkiller derived from cannabis. The problems you bring up don’t even enter the equation. So you can invest with a clear conscience — even if the catalyst for a sharp and sudden move up is a vote in 11 more days on the smoked version.

“The reader who ranted about bankers is totally off base,” writes our final correspondent. “He says they ‘extract money from everything and everyone.’ Yes, some bankers commit theft or fraud, but most of them gain their money through voluntary transactions.
“He says, ‘They contribute nothing to productivity or growth.’ Oh, really? So allocating capital to productive enterprises contributes nothing to productivity or growth? Yes, bankers, like all investors, sometimes make mistakes, but that doesn’t negate their contributions.
“He says, ‘They finance value-destroying activities and saddle us with debt.’ So when people borrow money from a bank, they had no choice in the matter? The bankers forced the debt on them?!
“If the reader wants to blame someone, he should be blaming central bankers. Their ZIRP policy is what has extracted money from savers. It’s also what has encouraged the financing of value-destroying activities.”
The 5: Golly, you make it sound as if central banking is somehow divorced from the activities of commercial and investment banking.
Why, in your telling, the whole industry is a bunch of veritable Midas Mulligans (the banker character in Atlas Shrugged) living under the oppressive thumb of Janet Yellen & co.!
Yes! Free Jamie Dimon!
Have a good weekend,
Dave Gonigam
The 5 Min. Forecast
P.S. We see a judge in Arkansas just struck that state’s medical marijuana referendum from the ballot. But as we pointed out yesterday, that one didn’t have much chance of passage anyway.
When it comes to the marijuana ballot measures, California’s the big deal. Eight polls agree: A “yes” vote is all but certain. When the final results send a handful of “pot stocks” skyward, will you collect your share?