The Great Dollar Shortage: An Update

Four weeks from today, the Federal Reserve will trigger the next stage of the global “dollar shortage.”
The best-case scenario is a wicked stock market correction. The worst case is an entirely new financial crisis. (Are you prepared for the latter possibility? Here’s what you should do — and shouldn’t — just in case.)
On Oct. 4, Jim Rickards said here in The 5 that the Federal Reserve would raise its benchmark fed funds rate in December. It would be the first such move in a year. This morning, with the election in the rearview, it’s time to further tease out the implications…

“The December rate hike was baked in before the election,” Jim reminds us. No matter who won, the Fed would act.
There’s just enough evidence of resurgent inflation to give the Fed cover. And the Fed desperately wants to raise rates so it can cut them again whenever the next recession rolls around — and there’s evidence that too is approaching.

What’s more, the Fed appears either oblivious or indifferent to the market chaos a rate increase would cause.
Last Friday, we made passing mention of a speech by the Fed’s No. 2 man, Stanley Fischer — one of only four people in the Fed power structure whose opinions really matter, according to Jim. Fischer said beyond the December increase, rates are set to plateau at levels below historical norms.
That’s a longer-term thing. He said something shorter term that Jim finds surprising, indeed alarming.
From a Reuters account of the speech: “Fischer also said he was ‘reasonably confident’ that spillovers from the Fed raising interest rates would prove manageable for foreign economies to which the United States is interlinked by trade and financial channels.”
In other words, the Fed raising rates won’t have the effect of jacking up rates in other countries or crashing the value of foreign currencies.

“That’s troubling and almost certainly represents wishful thinking on Fischer’s part,” says Jim. “In fact, there’s already a global dollar shortage.”
It’s worth revisiting this dollar-shortage paradox — a phenomenon we explored back in September. “The idea of a dollar shortage sounds strange to many observers,” Jim acknowledged. “Didn’t the Fed print $3.4 trillion of new money from 2008–2015? How could there possibly be a dollar shortage with that much new money around?
“The answer is that the world created new dollar-denominated debt faster than the Fed created money.”
In the United States, energy firms loaded up on debt, assuming oil prices would stay in the $80–110 range forever. This morning, it’s barely $46.
Meanwhile overseas, emerging-market companies loaded up debt denominated in dollars, assuming the dollar would stay weak forever. This too isn’t working out as planned; relative to a broad basket of foreign currencies, the dollar is approaching a 14-year high. 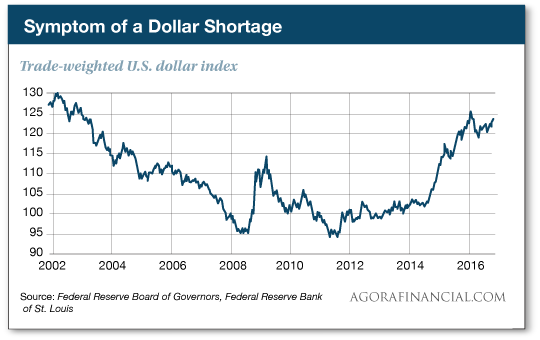 “Over $60 trillion of new dollar-denominated debt was created from 2009–2015,” says Jim. “This huge debt pyramid was fine — as long as global growth was solid and dollars were flowing out of the U.S. and into emerging markets.”
But soon after the dollar started to strengthen in 2011, the U.S. budget and trade deficits began to shrink dramatically. By 2013, the Federal Reserve began to tighten policy. And global growth was slowing down. “The dollar shortage took hold,” Jim goes on. “It seemed that everyone wanted his money back.
“Chinese corporations began to default. European banks started to show signs of stress. The spread between fed funds and the OIS (the overnight index swap rate) began to blow out. Now, in late 2016, the dollar shortage has started to morph into a debt crisis and potential liquidity crisis.”
But Mr. Fischer at the Fed seems not to know or not to care about the consequences. Yesterday, he declared, “It is certainly too soon to declare that a broad reduction in market liquidity has occurred.”

Fischer’s what-me-worry attitude echoes that of another of the Fed’s Big Four decision-makers.
Last month, we told you about Jim Rickards’ dinner gathering with New York Fed president William Dudley. Jim reminded Dudley that when the Fed raised rates last year, it set off an 11% stock market correction over the following eight weeks. Was Mr. Dudley not concerned?
He was not. Indeed, he saw no connection between the Fed’s action and the stock market. And even if a rate increase did tank stocks, Dudley said it’s “not our job” to put a floor under stock prices. “The Fed does not see the market carnage coming,” Jim concludes.

“November was volatile because of the election. December may be even more volatile as the Fed leans into the dollar shortage and makes matters much worse.”
It might even trigger the crisis Jim anticipates in his new book, The Road to Ruin — released only yesterday. The dollar shortage and the resulting scramble for liquidity could be so severe that the global monetary authorities would resort to what Jim calls the “ice-nine” plan for the money in your bank account. It would be there… but good luck getting access to it.
Because we have Jim in the Agora Financial stable of editors, we’ve arranged to publish a special edition of The Road to Ruin — unlike the one you’d get from Amazon or Barnes & Noble. It contains a bonus chapter about the No. 1 investment to own going into the crisis — something that’s been available only for the last 16 years.
If you act in the next 13 days, your copy will also be signed by Jim. But there’s no reason to wait until the last minute — and every reason to start preparing your portfolio and your household for the crises ahead. And all you pay is a $4.95 charge for shipping the book. Claim your copy now at this link.

Maybe this is the day the Trump bump takes a rest and the Dow breaks its seven-day win streak.
As we write, the Big Board is down about a third of a percent at 18,864. The S&P is likewise in the red, but the Nasdaq is up a skootch. Gold is steady at $1,225.
Retailers are taking center stage with earnings: Target delivered a “beat,” but Lowe’s missed — which says nothing good about the housing recovery, does it?
And the day’s economic numbers?:

Put together, the numbers argue against a Fed rate increase next month. But as we said above — and many times before — the Fed needs to raise rates so it can lower them for the next downturn. 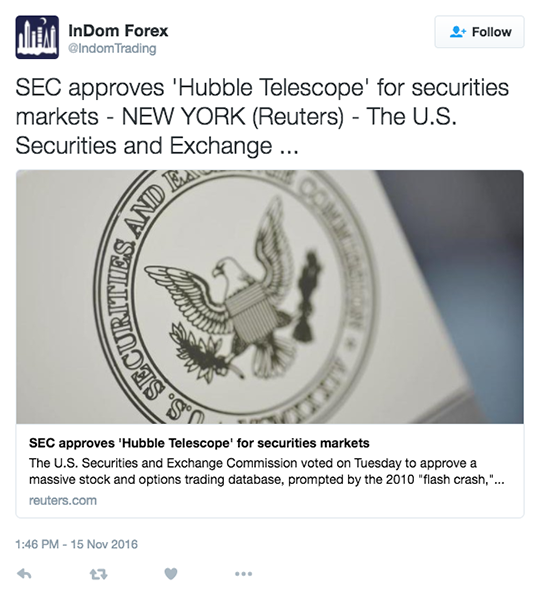 Yesterday, the SEC authorized the creation of a huge database of stock and options trades — every trade order, every modified trade, every cancelled trade, every executed trade. It will be called CAT, short for Consolidated Audit Trail.
With this massive market surveillance, the SEC promises it will be able to anticipate another flash crash like the one in May 2010 that crashed the Dow by 1,000 points in minutes, only to see it recover nearly as quickly. That is, the feds will see it coming from a distance and stop it before it happens. “The CAT would essentially be the Hubble telescope for the securities markets,” says SEC commissioner Kara Stein.
Heh… Does Ms. Stein recall that shortly after Hubble was launched into orbit in 1990, it turned out the primary mirror had been ground to the wrong shape and the telescope was sending back fuzzy images? The trouble took nearly three years to fix.
We think a better analogy would be the NSA’s scoop-it-all-up surveillance — which creates a haystack so big the feds rarely find any needles and so they overlook obvious red flags when someone’s about to, say, shoot up a nightclub in Orlando…

“I know you guys have to be nice to your readers, so I’ll be direct to the point: Stick it in your pipe and smoke it, fifth wheelers,” a reader responds to yesterday’s entry in our great infrastructure debate.
“I have been retired since 1-1-2001 and traveled the country as well in my 31-foot motor home. I did not find all that whiny crybaby stuff to be true. The interstates are in pretty good shape. That’s not to say a lot of work doesn’t need to be done.
“Stockman never said there wasn’t a pothole out there. He continues to say the U.S. government is broke and can’t pay for it. This isn’t rocket science; it’s arithmetic.”

“Who does your grocery shopping — your wife, housekeeper or you?” a reader writes. “The prices in the grocery have risen considerably.”
Oy… This happens every time we talk about “low inflation” these days, even though we’re careful with our language and point out that inflation is running lower than the pointy-heads at the Fed want.
“Here’s to low- or average-income families! How long has it been since you could get a decent package of burger under $6? I’ve eaten turkey so much by Thanksgiving I will probably be gobbling. They are also good about making the package smaller and the price is the same or higher. Produce such as watermelon used to be $2.00. Now it’s 98 cents a pound.
“There are all kinds of ways they are trying to sneak things past. A five-pound bag of sugar disappeared years ago. Is a ‘pound’ of coffee a pound or 12 ounces?
“I know, not everything has gone up, but it’s hard to find anything that has gone down except the price of gold.”
The 5: Yes, we get it. It’s why we say every time we mention the latest consumer price index that any resemblance to your own cost of living is purely coincidental.
Anymore, the official numbers have become so distorted that the only thing worth tracking is the change over longish stretches of time — three months or more. And so we don’t pay much heed to, for example, today’s flat producer prices number. The longer-term trend shows a slight pickup in inflation — which will give the Fed an excuse to raise rates next month. See above…
Best regards,
Dave Gonigam
The 5 Min. Forecast
P.S. The elites are determined to get more inflation, one way or another. This is a message Jim Rickards has hammered away at, over and over.
But this time, the consequences will be more serious than what we experienced in the late 1970s. It will be accompanied by a lockdown of the banking system.
What will that look like? Jim Rickards lays it out in detail in his new book, The Road to Ruin. You can get the Agora Financial exclusive edition now, complete with a bonus chapter laying out an investment plan. Get your copy now for only $4.95.