Trump and the Avalanche

Yikes! A day after we warned about “stagflation,” it’s showing up in a boatload of economic numbers.
You remember stagflation from the ’70s, right? The rotten combination of a stagnant economy and skyrocketing prices? Jim Rickards won’t rule it out as a possibility for a Trump presidency: His big-spending plans might fuel inflation, even as the Federal Reserve jacks up interest rates and tips us closer to recession.
No guarantees — it’s a “worst of all worlds” possibility. But weeks before Trump takes office, the numbers out this morning are already pointing in that direction.
On the “-flation” side of things… 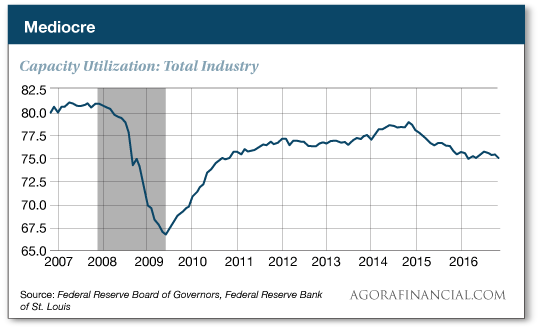 But even if we don’t return to the stagflationary ’70s, Trump isn’t out of the woods.
Yesterday, we described how Fed policy in general poses a threat to Trump’s economic policy. The day before, we showed how Uncle Sam’s choking debt might limit the upside to any Trump stimulus.
And there’s one more threat we ignore at your financial peril: “On top of these macroeconomic risks,” says Jim Rickards, “systemic risk is as dangerous as ever.
“Too-big-to-fail banks are bigger than ever, have a larger percentage of the total assets of the banking system and have much larger derivatives books.
“In complex, dynamic systems such as capital markets, risk is an exponential function of system scale. This means that the larger size of the system implies a future global liquidity crisis and market panic far larger than the Panic of 2008.

“There are many potential catalysts that could trigger such a crisis,” Jim goes on, “including Deutsche Bank, failed gold deliveries, an emerging-market dollar-denominated debt crisis, a natural disaster, etc.”
If you’re familiar with Jim’s thinking, you know it comes back to “complexity theory” — or, as he’s popularized the concept, avalanche theory. Pay no mind to which individual snowflake triggers “the big one.” It matters more that you know the snow shelf is unstable and will inevitably give way.

But as long as Jim brought up Deutsche Bank, let’s go back down that rabbit hole briefly.
We got a reader inquiry about DB the other day: “Is the prediction of the big German bank going broke an error or is it really happening?”
It’s happening, albeit in slow motion. Deutsche Bank stands at the end of a line of dominoes that began with the rejection of a constitutional referendum in Italy 10 days ago. The government of Prime Minister Matteo Renzi resigned, which means no one’s in charge to oversee the rescue of an ailing bank called Banca Monte dei Paschi.
Jim says the troubles at BMP “could cause a loss of confidence in other banks, such as UniCredit. If the wildfire spreads from there, the panic could hit Deutsche Bank and ultimately cause a global liquidity panic.

“A Trump administration could quickly be overwhelmed by a global liquidity crisis,” says Jim, “as the Bush administration was in 2007–08.
“In such a case, the global elites operating through the International Monetary Fund, Bank for International Settlements and G-20 will dictate solutions, since they control the remaining liquidity levers, especially SDRs” — the “world money” managed by the IMF.
“Trump could go along with the elite solution, which would involve cooperation with China, or he could fight the elites, in which case a new Great Depression could result.”
The elite solution would mean inflation. A fight over the solution would mean deflation. Jim says your portfolio needs to be braced for either…

“We call this a ‘barbell’ portfolio,” says Jim. “You have inflation and deflation protection on each end connected by cash in the middle. As our forecast improves with new information, assets can be reallocated from inflation to deflation or vice versa, and cash can be redeployed to your advantage.”
In addition… if you feel like taking on a little higher risk in exchange for a much higher reward, you can pursue “the Trump trade” that Jim saw emerging shortly after Election Day, a trade with up to 300% profit potential. However… the window of opportunity is closing as the Federal Reserve is set to raise interest rates today. To make the most of the opportunity, you’ll want to act now: Here’s where to get started.

Traders are marking time until the Fed makes its move — around the time this episode of The 5 hits your inbox. The major stock indexes are little moved from yesterday’s record closes. Gold is up barely, at $1,161.
There’s no drama about what the Fed will do: It will raise the fed funds rate from its current range of 0.25–0.5% up to 0.5–0.75%. As we said yesterday, it’s what comes next year that’s more of a wild card. Fed Chair Janet Yellen will hold one of her quarterly news conferences after the decision — where she may or may not shed light on the Fed’s intentions going forward. More tomorrow…

“Connected cars represent one of the fastest-growing tech trends,” says our small-cap guru Louis Basenese — and global corporate giants are taking notice.
Last month, Samsung dropped $8 billion to acquire the car-tech firm Harman Intl. And Siemens, the German industrial giant, spent $4.5 billion to acquire Mentor Graphics.
Deals like that demonstrate internet connectivity in a car is no longer a novelty. Ditto a car’s ability to interact with your other devices, like your smartphone.
It’s all about growth, says Louis: “According to the latest estimates from BI Intelligence, the number of connected cars on the road will quadruple by 2020. With that much upside potential on tap, it’s compelling nonauto companies to splurge in order to grab a piece of the action.”
That’s great news for one of Louis’ picks in True Alpha. It’s a company that does significant business with 11 of the top 15 automobile original equipment manufacturers (OEMs). “It’s only a matter of time before we wake up to news of a takeover.”

OK, who front-ran Donald Trump’s tweet about the F-35?
As we mentioned yesterday, the president-elect took an implied swipe at Lockheed Martin for the cost of the F-35 fighter jet — which put a hurt on LMT shares.
But upon closer inspection… Trump issued that tweet at 8:26 a.m. EST. And someone started dumping LMT stock in premarket action six minutes earlier.
Hmmm… We’ve long held that “insider trading” is a victimless crime. But when it’s based on advance knowledge of a government official’s actions, that’s a horse of a different color…

“About Trump and Medicare,” writes one of our regulars: “You got it right with your comment about the crony capitalist health care system — well, almost (see, no ‘but’).
“The U.S. doesn’t have a health care system. In a health care system, the goal is a healthy population and getting those who lose health back to health. The USA has a health care industry. The goal of a health care industry is profit, and a healthy population is not a profitable population.
“Courtesy of the bought-and-paid-for political elite, the health care industry is unbelievably profitable. For the same reason, the pharmaceutical industry in the USA is obscenely profitable. For example, the drug therapy for hepatitis C is Harvoni (from Gilead). One pill per day for 12 weeks (84 pills) at $1,000 per pill. In Egypt, the same drug and course of treatment is $900.00. That’s the total for all of the 84 days, not per pill. Cost in USA, $84,000. Cost in Egypt, $900. Difference, $83,100.
“Even after transportation, hotel, food and travel expenses, one would still save close to $80,000 by going to Egypt for treatment. I expect that Thailand might be even cheaper. The U.S. health insurance companies go along with this crony crap.
“So how about it, Super Don, you really gonna do something good?”
The 5: Not judging by his choice of Tom Price as Health and Human Services secretary.
Price gained notoriety in Congress as a firm opponent of Obamacare. But his remedies are the usual Heritage Foundation-Chamber of Commerce nostrums: Allow insurance to be sold across state lines, give the states block grants for Medicaid, cut regulations and limit lawsuits against medical professionals.
All of that is so much tinkering around the margins. It does almost nothing to bring down costs — i.e., that $84,000 hep C treatment.

“Forget about being snarky regarding comments about José Canseco being a financial guru,” writes another one of our regulars after we were at a loss for words on Monday.
“These are the types of things that have marked other market tops, like the talk of ‘Dow 40,000 here we come’ back in 1999. (All the talk this week is on Dow 20,000 is in reach.)
“When the shoeshine boy and the cabbie start giving stock tips…
“On the other hand, this is the first time I ever recall any president-elect announcing we are in a ‘big, fat, ugly bubble’!
“These statements are as conflicted as the markets seem to be.
“Reminds me of a quote by Mr. Greenspan from his book, The Age of Turbulence: ‘So the key question remains, as I summarized it in a 1996 reflection I shall never live down, “How do we know when irrational exuberance has unduly escalated asset values, which then become subject to unexpected and prolonged contractions?”
“To paraphrase his pages-long answer, you can’t.
“For what it’s worth, things don’t seem very exuberant to me at the moment. This doesn’t feel like housing or tech, in spite of the tweets from José.
“Merry Christmas, everyone!”
The 5: Good point. For all the complaining you see on the interwebz how certain valuation indicators are at alarming highs (i.e., “cyclically adjusted price-earnings”), it’s hard to point to a sector (housing in 2007, tech in 1999) where ridiculous optimism joined hands with rampant fraud to go on a bender.
Then again, housing and tech are part of a data set going back only two decades…
Best regards,
Dave Gonigam
The 5 Min. Forecast
P.S. A final word from Jim Rickards as the Fed winds up its meetings today:
“Is President-elect Trump even aware of what’s coming? Or will Trump get ‘blindsided’ by the news?
“I know what’s coming. And more importantly for you…
My proprietary currency trading analysis system is flashing like never before…
“In fact, if my analysis is correct, this ‘Trump trade’ could yield gains as high as 300% in the next 30–60 days… that’s more than double your money in return.
“But the most lucrative gains could expire based on what transpires at the Fed meeting today (Dec. 14). Go here ASAP.”