Somewhere in an alternative universe, one of President Hillary Clinton’s first acts in office during 2017 came out of the blue. She struck a deal with Mainland China that slashed the U.S. national debt by more than 5%: Beijing wrote off the $1.12 trillion it held in U.S. Treasuries, and in exchange, the United States stopped selling arms to Taiwan.

This alternative future history is suggested by an email from our own universe dating to late 2011, when Clinton was secretary of state. Clinton aide Jake Sullivan forwarded her a New York Times Op-Ed by a “former international security fellow” at Harvard named Paul Kane. The article proposed just such a deal with Beijing — debt forgiveness in exchange for cutting off Taiwan’s arms supplies. The headline was, “To Save Our Economy, Ditch Taiwan.”

Replied Clinton, “I saw it and thought it was so clever. Let’s discuss.”

Obviously, nothing ever came of it. For sure, nothing will come of it now.

The State Department released this email along with many others on Oct. 30, 2015, to comply with a Freedom of Information Act lawsuit. It went unnoticed until WikiLeaks republished it a few days ago and it was picked up in the Taiwanese press.

Meanwhile, as Donald Trump prepares to take office in less than 48 hours, the state of play between the United States and China could set off “a global liquidity crisis far worse than the one that occurred in 2008,” says Jim Rickards. “Lifetime wealth can be made or lost playing this crisis correctly.”

For months, Chinese leaders have been performing a delicate balancing act, trying to appease people in several power centers around the globe.

As noted here yesterday, China desperately needs the value of the yuan to fall. Otherwise, it will exhaust its foreign exchange reserves by the end of this year. Throughout 2016, however, Beijing kept propping up its currency. Why? As Trump told The Wall Street Journal on Friday, “they don’t want us to get angry.”

At the same time, China also wants to please the International Monetary Fund. “The IMF designated the yuan a global reserve currency as of Oct. 1, 2016,” Jim reminds us. “The IMF is not overly interested in whether the yuan is too high or too low. Their main concern is currency stability, and that movements in the dollar-yuan cross-rate not become disorderly. China’s recent efforts to prop up the yuan can be understood as an effort to satisfy the IMF.

“Whether China is propping up the yuan to satisfy the U.S. or the IMF doesn’t matter,” says Jim. “What matters is that China can’t afford it.

“The way China props up the yuan is to buy yuan for dollars taken from their reserves. Once the dollars start to run out, the yuan will go into free fall. That’s what’s happening now.”

It comes back to that “second-grade math” Jim laid out with us yesterday: Chinese foreign exchange reserves peaked at $4 trillion in mid-2014 and have fallen to $3 trillion now. About $1 trillion is tied up in illiquid assets like hedge fund investments. Another $1 trillion is needed to shore up China’s shaky banks. That leaves only a $1 trillion cushion… and it’s depleting at such a rate that China will be broke by year’s end.

For the moment, Chinese leaders are resorting to paper-clip-and-rubber-band solutions they already know aren’t working.

“China is imposing capital controls, but they are not effective,” Jim goes on. “There are many legitimate dollar transfers that have to be conducted every day. Business people simply disguise capital flight as a business invoice and send the dollars out of China, draining Chinese reserves in the process.”

Jim learned that firsthand while he was in China last week and delivered a talk to some 400 economists, institutional investors and government officials.

“When the money for my usual speaker’s fee arrived in my bank account, I saw that it had been wired from Hong Kong rather than Shanghai, where the speech was delivered, and the wire was in the name of a ‘trading company.’ Clearly, someone found a way to get funds from China to Hong Kong on an invoice basis and then pay me. Everyone I met in China is trying to do the same.” 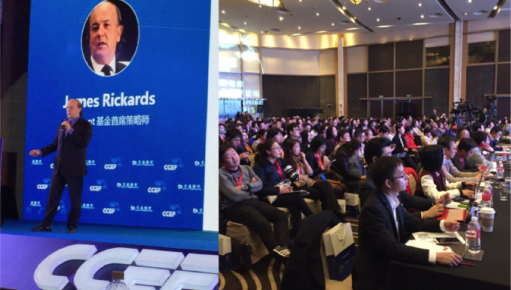 “China’s capital controls leak like a sieve, and the bleeding continues,” Jim goes on. “China could resort to more draconian measures, but that would impede legitimate capital flows and anger the IMF.

“This leaves China with one and only one choice — cheapen the currency,” Jim concludes.

“They have been trying to do this in baby steps since December 2015. But this policy is counterproductive. Chinese citizens correctly read the tea leaves and see the yuan is going lower. This increases downward pressure on the yuan as people try to get their money out before it’s too late.”

Better to get it over with all at once — especially with Trump coming into office and threatening to brand China a “currency manipulator,” which would lead to big tariffs on Chinese exports to the United States. “In effect,” Jim explains, “China will say to Trump, ‘Since you’re not giving us credit for propping up the yuan, we’ll show you what happens when we stop trying.’”

The move could come as soon as Friday, when Trump takes office. China’s quarterly GDP figures will be released that day. If the number is weak, the announcement might well be accompanied by an instant devaluation.

But if the word doesn’t come Friday, it won’t be long afterward. “China will execute a ‘maxi-devaluation’ of 10% or more overnight, sooner rather than later,” Jim says.

“That way, capital will stop leaving China and some foreign investors may decide it’s time to invest there. This will stop the bleeding in the capital account.”

But big moves like that don’t happen in a vacuum. They’ll have an impact on every asset class — stocks, bonds, commodities and, of course, currencies. With Trump about to take office, Jim says there’s no time to waste getting ready. That’s why he’s holding a live online training event tonight at 7:00 p.m. EST. During this exclusive briefing, you’ll learn how to parlay the coming market turmoil for gains of 200%… 300%… even 400%… before the end of 2017.

You can even submit questions to Jim… and it won’t cost you a thing to watch. There’s still time to RSVP for this event; just submit your email address here and we’ll make sure you have access.

To the markets, where stocks as a group are once again stalling out. The major U.S. indexes are all oscillating within a quarter percentage point or less, the Dow a shade below 19,800. Gold is holding onto yesterday’s gains at $1,215.

We got a raft of economic data this morning, to wit…

The soldier who helped pull back the veil on some of the global elite’s seamier economic and financial schemes will soon go free.

As you’ve surely heard by now, President Obama has commuted the 35-year prison sentence of Chelsea Manning — the Army private who in 2010 released 700,000 classified government files to WikiLeaks, hoping to expose U.S atrocities in Iraq and, as she put it, “make the world a better place.”

With the proviso that not all of the Agora Financial editors might agree… here at The 5, we owe Pvt. Manning a debt of gratitude. While the financial files didn’t grab the big headlines, they furnished much fodder for our readers in 2010–2011. Without her revelations, we would have never learned…

We repeat what we said when Manning was sentenced in mid-2013: Seeing as even the government witnesses during the trial conceded no one was killed as a result of Manning’s leaks… we daresay the world’s a richer place for them.

“I’m always entertained by the conservative readers, as they blame everything on the liberals,” writes a reader after we shared another email yesterday chiding us for “Trump bashing” — which is what fanboys think we’re doing when we hold him to the same standards of accountability as Obama.

“To these people, Bush, the Republicans (by repeal of Glass-Steagall — I know Clinton signed it, but you know it was a conservative deregulation bill) and the Fed have no blame for the state of the economy when Obama took office.

“It’s kind of why the ‘liberals’ were voted in after the Bush debacle.

“And the funniest is the reader’s seeming belief that the Republicans and Trump are going to give us retired folk larger increases in Social Security. Seems this reader isn’t aware that there’s already a Texas Republican senator proposing to ’fix’ Social Security by cutting benefits and COLAs in the future. Another example of disdain for facts from the Republican email ‘volkish movement’ in vogue the last few decades.

“Well, apparently, we boomers have brought this civil war on ourselves, and I see no good outcome until our generation dies off and we leave the future to the millennials. By some miracle, they seem to have been brought up without engaging in the stupidity of their parents’ generation.”

The 5: We never tire of mentioning that Ron Paul voted against repealing Glass-Steagall in 1999. Deregulation is fine and well in the main… but when it comes with a blank check from the taxpayer, the potential for “moral hazard” is off the charts. (See, “2008, Panic of.”)

And on the ongoing topic of swampy-drainy working out no better than hopey-changey… We see Trump’s choice for transportation secretary, Elaine Chao (aka Mrs. Mitch McConnell), will get a golden parachute from Wells Fargo worth up to $5 million over the next four years.

Chao has been on WFC’s board since 2011. “Wells Fargo, like several banks and defense contractors,” explains Lee Fang at The Intercept, “provides a special clause in its standard executive employment contract that offers flexibility for awarding compensation if executives leave the bank to enter ‘government service.’”

No, that couldn’t possibly encourage a revolving-door culture, could it?

P.S. Did you play it? Readers of Jim Rickards’ Currency Wars Alert were urged yesterday to take 63% profits on a position keyed to the Russian ruble they’d been holding for less than four months.

If you missed out, you can join us tonight and be clued in to the opportunity for even bigger gains on a play tied to the Chinese yuan. Jim shows you how to do it — without playing the risky currency markets — during a FREE live training session tonight at 7:00 p.m. EST.

This is your final reminder; we will not send another email this afternoon. If you want in, you need to click here to sign up now.