The president is starting to get his way with the dollar. And gold is already benefiting.

A week before taking office, he told The Wall Street Journal the dollar had gotten “too strong.”

This morning, during a meeting with drugmakers, he complained that currency devaluation by other countries prompted Big Pharma to move production overseas. At the same time, his trade adviser Peter Navarro told the Financial Times that Germany is taking advantage of a “grossly overvalued” euro to get the upper hand over the United States.

With that, the dollar index — of which the euro comprises 57% of the total — has tumbled to levels last seen a few days after the election… 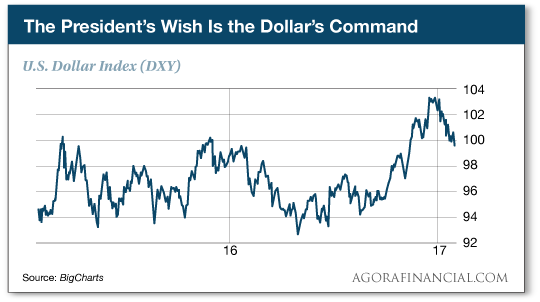 Because a weak dollar usually means strong gold… gold is set to notch its best month since the post-Brexit panic last June. The Midas metal began 2017 near $1,150. At last check, the bid was up to $1,210… 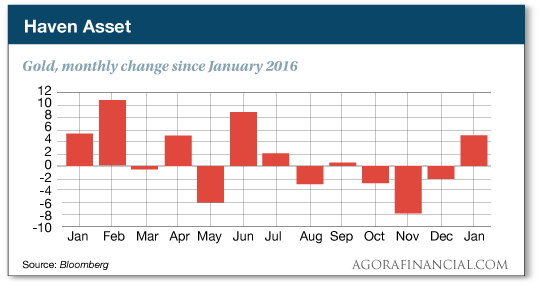 “After briefly visiting 11-month lows, gold has started to quietly bottom out,” says Greg Guenthner of our trading desk. “Its spot price has risen back in the neighborhood of its two-month highs. Now we have a situation where gold is firming and the dollar is losing steam.”

Seems like an ideal time to jump in — but maybe not in the usual way. Instead, you might want to investigate a way to generate instant income from gold.

It’s a little-known but powerful technique — we went to the trouble of giving away three one-ounce gold coins on the streets of New Orleans to prove it. See the powerful video demonstration here.

The day’s earnings numbers have been underwhelming. MasterCard delivered an earnings “beat” by a penny per share… but UPS fell short of expectations.

But the mainstream drumbeat about the market action continues to focus on “Trump policy worries,” in the words of CNBC.

Then again, there may be less to that “regulatory rollback” than meets the eye.

In theory, every one new regulation is to be accompanied by the elimination of two others. In practice, huge categories of regulations are exempt from the president’s executive order. Many regulatory agencies operate independently of the White House, including the Securities and Exchange Commission and the Commodity Futures Trading Commission.

There will be an objective measurement of progress — the number of pages in the Federal Register. The total at year-end 2016 reached 82,324… 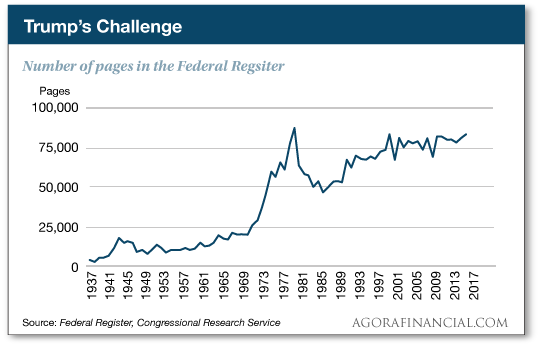 The president is selling this rollback as a boon for small business, even though large ones would benefit too. For yesterday’s executive-order photo op, he was surrounded by small-business owners. He declared it’s “almost impossible now to start a small business and it’s virtually impossible to expand your existing business, because of regulations.”

That’s undoubtedly true. It’s also far from the whole story. America desperately, urgently needs more startups. They’re the source of almost all net job growth. And while regulations are a problem, a year ago we identified the two biggest obstacles to the formation of new businesses — payroll taxes and health insurance costs.

We haven’t heard a peep from Team Trump about lowering the self-employment tax. Meanwhile, individual health insurance policies delivered skimpy coverage at a high price even before Obamacare came along; “repealing and replacing” Obamacare is no panacea.

The battle over the online sales tax is all but over. And Congress didn’t even have to pass a law.

In every Congress since 1999, someone’s floated a proposal requiring online retailers to collect sales tax — on the theory it would “level the playing field” with mom and pop local businesses, and deliver up to $24 billion a year in revenue to state and local governments. In 2014, legislation passed the Senate before it died in the House.

We’ve been on the story ever since late 2011 — when we noticed a curious supporter of the legislation. Amazon lined up behind the proposal. Turns out the company had developed proprietary software that could sort out the roughly 10,000 combinations of state and local sales tax rates across the country. And it was happy to lease that software to other online retailers — for a 2.9% cut of every sale.

It’s not required by law to do so. It has no warehouse or distribution center, no physical “nexus” in those states, which is the standard under a 1992 Supreme Court case called Quill v. North Dakota. (Those were pre-web days, but the case governed catalog sales. Same principle.) But it’s charging sales tax in those states anyway. What gives?

Remember, if you’re subject to state or local sales tax, you’re supposed to pay it on all your purchases — as if anyone keeps track of their online purchases and cuts a check to the state treasury at the end of the year.

Last month, the Supreme Court turned away a challenge to a law in Colorado that effectively requires online sellers to insert a popup telling you how much sales tax you’re supposed to fork over… and send you a follow-up email.

Amazon, understandably, figures it’s less hassle for customers to just charge the damn sales tax at checkout and be done with it.

In a sense, it doesn’t matter whether anyone else follows suit; not only is Amazon the No. 1 online retailer, its sales equal those of the companies ranked No. 2 through 20.

Whether or not the Senate confirms Jeff Sessions as attorney general today… legal marijuana has a clear road ahead.

Sessions is a drug warrior from way back, but our trend forecaster Gerald Celente says that doesn’t matter. “Trump is a businessman forming an administration that will function more like a boardroom than a Cabinet. And pot is good business, just like legalized gaming was for Trump in Atlantic City, Las Vegas and worldwide.

“Trump will manage Sessions and others more like senior vice presidents, rather than political regulars. As long as the aim is economic and job growth that increase tax revenues, pot is safe.”

Marijuana is legal for either medical or recreational use in 28 states now. New states regularly come on board, seemingly on the first of every month — which could make tomorrow an excellent entry point for the “penny pot stocks” we’ve been writing about these last several months.

Behold, the most depressing map we’ve seen in we-don’t-know-how-long. We reproduce the original verbatim… 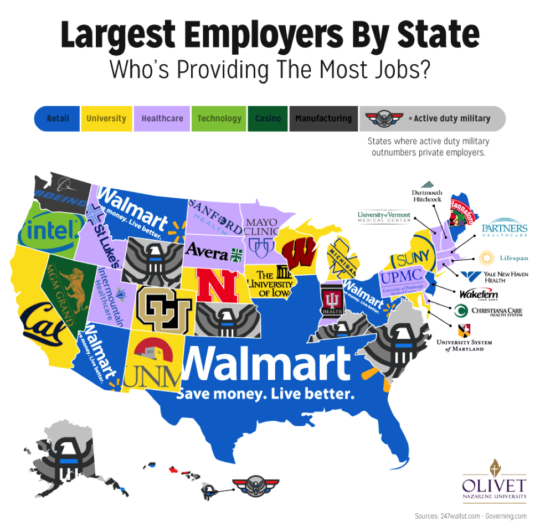 Researchers at Olivet Nazarene University in Illinois set out to identify the leading employer in all 50 states. A casual glance reveals the list is dominated by…

We’re reminded of a line from Season Two of The Wire, spoken by the union boss Frank Sobotka: “We used to make s*** in this country, build s***. Now we just put our hand in the next guy’s pocket.”

“Hey, Dave, get off your frigging soapbox,” begins today’s mailbag.

“Your readers want to see and hear financial news, not political meanderings. Not to say politics don’t affect the stock market. But your more than slightly biased remarks only reflect the flagellation and dumbness of the mainstream media.

“By the way, have you never seen the TV reports and views of Barack Obama signing his executive orders, most of which are unconstitutional and reason for overturning them by Donald Trump? Get back to business!”

The 5: At least you didn’t command us to “get on board with our president.” That one came in, if memory serves, after we connected a few interesting dots in early December.

Back in 2011, when we collaborated on this e-letter with our executive publisher Addison Wiggin, someone wrote in to demand we stick to “coldhearted financial research.” Addison replied that in many instances, “politics are the problem, and you ignore them at your peril.”

“I am extremely tired,” writes another reader, “of hearing one-sided, unthought-out political opinions in your emails. Since he lost the popular vote by about 3 million, obviously, the average American did not vote for Trump.

“He is the least popular president ever, which is clear by the tremendous amounts of protests against his policies in his short official capacity. I’m only looking for financial advice. Please provide more of the latter and much less of the former inaccurate, one-sided, opinionated nonsense. I have better things to do with my time.”

The 5: Yes! We know if we offend “both sides,” we’re doing something right…

“Isn’t all the commotion about this travel ban,” a reader enquires, “nothing but an extension of what the Obama regime already had in place?”

The 5: Yes. Chris Campbell did a dandy job of unpacking that one in yesterday’s edition of Laissez Faire Today.

“Wonder if they follow him to the powder room, too? One can only hope they remain outside – in line, of course.”

“As it is my unqualified understanding,” a reader writes, mercifully moving on to another topic, “Congress makes the laws and appropriates the money.

“So please explain why all this hoopla about the debt ceiling. Congress wants to blame the POTUS for overspending, when it is their own lack of self-control that is the culprit.”

The 5: It’s all partisan posturing.

When he was a senator, Obama lined up with his fellow Democrats and voted against Bush’s requests to increase the debt ceiling.

Then Obama became president and it was Republicans who made a squawk — except for a handful who fell in line when John Boehner and Paul Ryan cut their budget-busting deals with Obama.

Now? Democrats will revert to their stance during Bushtime. But there are still plenty of recalcitrant Republicans. Some are skeptical about a giant public works spending program. Others worry about tax cuts that aren’t “revenue neutral.”

The debt ceiling comes back into force March 15. The Treasury can perform some accounting tricks to buy a few months. But sooner rather than later, Trump faces the challenge of pulling off a grand bargain that incorporates individual tax cuts, corporate tax reform, an infrastructure spending program and Obamacare repeal — all at once, because it all involves revenue or spending or both — and all the while raising the debt ceiling.

If he pulls it off, it will only be because his loyalists would control enough of the GOP apparatus to threaten party holdouts with primary challenges. Seems like a tall order right now…

P.S. There’s something else we’re keeping an eye on for mid-March.

It’s a little-known statute. The last time it was reinstated, one lucky man in Ohio watched his initial stake of $1,000 grow to an exceptional $4.6 million… virtually overnight.

This same law is set to be reinstated again on March 16. Click here to see the stunning details.