“The Trump administration has clearly signaled that the day of the strong dollar is over,” says Jim Rickards — picking up where we left off yesterday.

“The dollar tumbled on Tuesday,” says the Reuters newswire, “headed for its worst start to a year in three decades.” We noted yesterday how Team Trump was jawboning the dollar downward.

But what about the Federal Reserve? What about the epic showdown between the White House and the Fed that we were anticipating a month ago?

Trump has grand plans for tax cuts, infrastructure spending, defense spending, all manner of dollar-weakening “stimulus.” But going into 2017, the Fed was talking about raising interest rates three times a year.

Fiscal loosening, monetary tightening: What happens to the dollar — and the economy — when Trump mashes the accelerator while Janet Yellen slams the brakes?

As it happens, the Fed is wrapping up two days of meetings today. It will issue a “policy statement” around the time this episode of The 5 hits your inbox. Almost no one anticipates a rate increase today; traders will instead try to read between the lines to divine the Fed’s intentions for its March 15 meeting and beyond.

But they’re wasting their breath. Jim says the outlines for the next few months are already coming into view… and the situation has changed from only a month ago. The White House-Fed showdown has been averted… for now.

“The dollar may get one last boost from a Fed rate hike in March, but after that, even the Fed will acknowledge that they got it wrong again and start another easing cycle,” Jim tells us.

The Fed has been lurching back and forth between tightening and easing for nearly four years now — ever since Yellen’s predecessor Ben Bernanke dropped a bombshell by telling Congress the Fed was looking to “taper” its $85 billion a month in bond purchases.

Just in the last two years, we’ve been treated to the following fits and starts…

It’s at this moment we come back to something Jim told me during a visit to our Baltimore offices on a spring day in 2014: “Don’t ever think for a minute that the central bankers know what they’re doing.” Heh…

And so the Fed is setting up to lurch back to easing — even if it won’t admit that this afternoon.

Why? “U.S. growth continues to disappoint,” says Jim. “Fourth-quarter GDP came in at 1.9%, below expectations — the final chapter on the worst year of U.S. growth since 2011, when the economy was still healing from the global financial crisis. The strong dollar is a major head wind to growth, along with flat labor force participation and weak productivity growth.”

And as we mentioned on Monday, the Fed’s preferred measure of inflation remains stubbornly below the Fed’s 2% target.

Jim’s forecast: The Fed will follow through with a rate increase on March 15 — remember, the Fed needs to raise rates so it can lower them again during a crisis — but then the increases will be put on hold.

“The fundamental weakness of the U.S. economy combined with tighter monetary conditions and a strong dollar will induce some combination of job losses, deflation and a stock market correction that will cause the Fed to back off again and ease by the spring.”

Result: “When you see a coordinated attack on the dollar from the White House, the Treasury and the Fed, you can bet the dollar will weaken. That means a higher dollar price for gold.”

And it’s not just a falling dollar that will put wind in gold’s sails during 2017. There’s also good old supply and demand.

“Vault operators have told me physical gold holders are taking gold out of banks and putting it into private vaults, where it is no longer available to prop up the paper market.”

Recall that for every ounce of real gold out there, another 100 “paper” ounces trade in the futures markets. Commercial banks whose customers put real gold on deposit effectively borrow against that gold to leverage those paper trades. It’s one way the powers that be manage to keep a lid on the price of gold. That’s why the withdrawal of that gold from the banks is so significant.

Even the mining industry says it’s running out of gold.

“Due to the price decline since 2011,” Jim explains, “new mines are not opening, output from existing mines is declining, old mines are being shut in, capex is being cut and reserves are being reduced.” 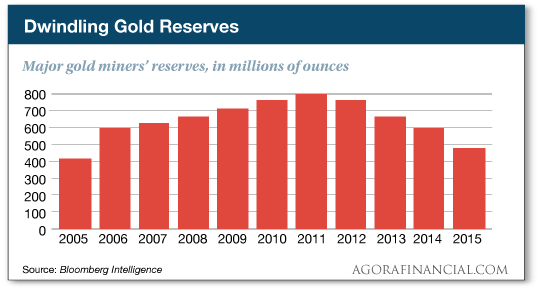 “We’re heading for a crackup,” says Jim, “where physical shortages will cause delivery failures and ignite panic buying of physical gold that even the paper market can’t contain.”

That will surely benefit the junior gold miners in Rickards’ Gold Speculator. “You likely know what’s at stake when a tiny gold company delivers a high-grade gold deposit,” Jim reminds us. “Oftentimes, they’re bought out by gold majors for billions of dollars — overnight.”

Jim and his team believe they’re onto what he calls “the most valuable gold of all” — owned by a company trading for only $9 per share. Check it out at this link — no long video to watch.

For the moment, the dollar is strengthening and gold has shed yesterday’s gains. At last check, the bid is $1,201.

The gold price started sinking at 8:15 a.m. EST when the ADP employment report indicated gangbuster growth in private-sector payrolls last month — 246,000 new jobs. [Caution: Traders glom onto ADP as a predictor of the government’s monthly jobs report, even though it has a miserable track record in this regard.]

The price sank further at 10:00 a.m. when the Institute for Supply Management released its ISM manufacturing index. On the one hand, the January figure of 56.0 is the strongest since November 2014. On the other hand, the number has been above the 50 dividing line between expansion and contraction for only four months. [Caution: The ISM is a measurement of industry sentiment. Concrete numbers like factory orders are the real tell of manufacturing health; we’ll get that number on Friday.]

The major U.S. stock indexes are stabilizing after the last two days of losses. The Dow has inched its way back above 19,900. The small-cap Russell 2000 is up nearly half a percent.

The iPhone 7 didn’t have any new breakthrough features (unless you count the elimination of the headphone jack), but it’s not the bust many skeptics figured it would be. In fact, sales are so robust that AAPL has broken a streak of falling revenue that lasted three consecutive quarters.

Meanwhile, the company’s cash stash has swelled to a record $246 billion. That’s money our income specialist Zach Scheidt figures will eventually start returning to shareholders in the form of dividends — especially if Trump and Congress can come to terms on corporate tax reform and Apple brings that money back from overseas.

AAPL is still a touch below Zach’s buy-up-to price in Lifetime Income Report. And in True Alpha, Louis Basenese has an options play on Apple designed to perform like the high-octane small caps that are his specialty. He expects blockbuster developments in the run-up to the iPhone 8’s release later this year.

So Trump summons Big Pharma execs to the White House yesterday to complain about drug prices… and the biotech sector soars. What gives? 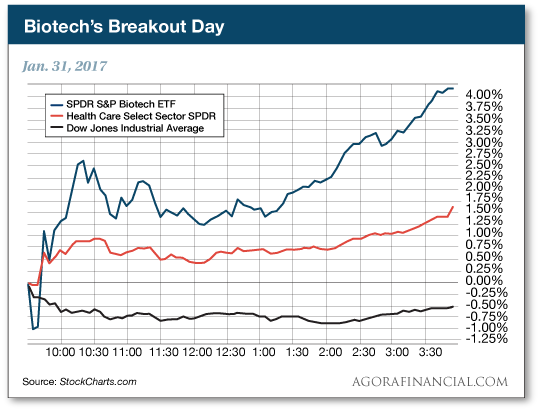 The answer is something we suggested a few days ago when we reviewed Trump’s short list of candidates for FDA commissioner. Whomever he ends up picking is likely to break with more than 50 years of policy: No longer would drugs have to be proven both “safe and effective” before coming to market. Safety alone would be enough. That would mean more drugs coming to market more quickly, with lower research-and-development costs.

Trump didn’t get that explicit during the talks yesterday. But he did say, “We’re going to be getting rid of regulations that are unnecessary — big league.”

Industry observers understood the cue. Looser regulation more than makes up for Trump hectoring the companies about their prices and the large number of their products manufactured overseas. This story’s just getting started.

“As a veteran of 35 years in the Silicon Valley, I am saddened to see you parroting the ‘lack of programmers and engineers,’” a reader writes after Monday’s episode.

“100% BS! If you had stated a ‘lack of cheap programmers and engineers,’ you would be more to the point.

“We have the programmers and engineers. Who do you think founded all this technology? But as the money crowd slashes its way through the Silicon Valley, you get U.S. workers cut and ‘must have’ foreign talent pouring in.

“Keep up the good work. You get it right more often than not.”

The 5: Well, we did say time didn’t allow for an exploration of the reasons behind the shortage.

And while you’re closer to the ground truth than we are… our skeptic antennae are picking up a faint signal. If all the foreign-born programmers and engineers are being paid substandard wages, how do they afford super-expensive Bay Area housing?

We’re aware there’s a sizeable homeless contingent in Santa Clara County… but our impression was most of the ones with jobs are American-born and stuck in service occupations. We haven’t heard many tear-jerker stories about Bangladeshi coders living in cardboard boxes beneath an overpass on U.S. 101.

“Love reading The 5 every day,” writes our final correspondent. “There’s no ‘but’ involved, just want you guys to keep offending both sides, PLEASE!”

The 5: We daresay Trump’s making that part of our job easier. Under Trump, it seems more and more people, even discerning readers of The 5, are apt to retreat into a tribal identity. We can recite an innocuous fact and it sends one tribe or another into apoplexy.

Whatever. We’ll keep lobbing spitballs at the politicos and potentates of all stripes when they deserve it…

P.S. What? Another delay with Obamacare repeal? Say it ain’t so!

“House Republicans voiced frustrations Tuesday about slow-moving efforts to unwind Obamacare,” says Bloomberg, “urging their leaders to pick up the pace on a top campaign promise.”

Good luck with that, now that all of Washington is set to grind to a halt over the Supreme Court.

We repeat: Don’t wait for the president and Congress to free you from Obamacare. You could be waiting a very long time.

Learn about the legal steps you can take right now that could save you thousands of dollars a year in premiums… with low deductibles and a wide choice of doctors. Start here.