For God’s sake, man, get some sleep… 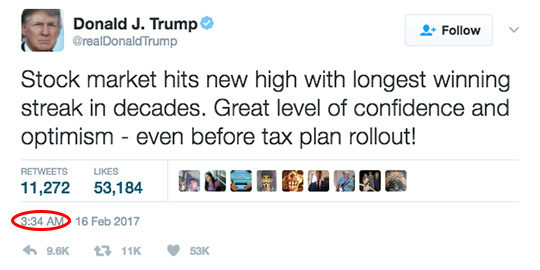 We’re going to file this one away for future reference. You know, because pride goeth before a fall and all that… 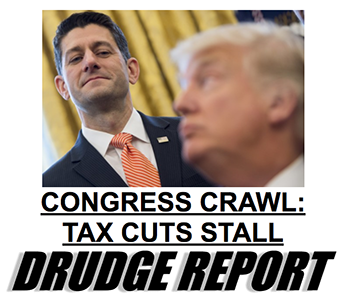 “House Republicans are planning to meet Thursday behind closed doors to try to regain some momentum on their plan to repeal Obamacare,” says a Bloomberg story, “but action still remains weeks away, or longer. These delays, in turn, push back the GOP’s tax plans.

“Neither issue has progressed enough to be on schedule to wrap up by August recess, according to a person familiar with leadership’s thinking who isn’t authorized to speak publicly on the matter.”

Gee, and now we’re only 28 days away from the debt ceiling coming back into force.

As you’ll recall, the debt ceiling’s been suspended since October 2015 under the “zombie budget” agreed to by President Obama and House Speaker Paul Ryan.

Since late last year, our own David Stockman has been pounding the table: The return of the debt ceiling will act as a roadblock to nearly all of the Trump agenda, with only isolated exceptions like defense spending and bank regulations. “By the Fourth of July,” David says, “the Trump administration will be out of cash.”

Democrats are united against Trump, and many Republicans are loath to grant Trump his budget-busting wishes. How can Paul Ryan and Mitch McConnell round up majorities to raise the debt ceiling from $20 trillion to, say, $22 trillion? They can’t.

What David said in this space back on Dec. 1 still holds here on Feb. 16: “There will be no massive tax cut, no huge infrastructure initiative or any other variation of the ‘fiscal stimulus’ will-o’-the-wisp that seems to have sent the bond markets reeling and the stock averages to giddy flights of fantasy.

“Every block of votes Trump manages to wrangle for the debt ceiling increase will require a king’s ransom of compromises on everything he has promised to do in the first 100 days.

“President Trump may even be forced to back off from his promise to kill Obamacare in order to get Democratic votes for the debt ceiling increase. And that’s because there is not a chance in the world that tea party Republicans will go along with the idea that an election earthquake happened only so they could vote for trillions more of public debt as their first order of business.

“The stock market will swoon when it becomes clear that the Imperial City is descending into ungovernable political chaos and gridlock. And that is virtually guaranteed.”

And now there’s an even bigger, more insurmountable obstacle to a debt ceiling agreement — the latest bogus “Russia’s subverting our democracy!” scare.

The evidence-free Russia drumbeat went away for the first three weeks of the Trump administration — overwhelmed by a flurry of tweets and photo ops and executive orders.

But the brouhaha that led to the resignation of National Security Adviser Michael Flynn has rekindled the animal spirits of the establishment crowd still aghast at Trump’s presence in the White House. “Russian interference in our election is potentially a bigger scandal than Watergate ever was,” intones Nicholas Kristof in The New York Times, speaking for all Very Serious People.

Democrats, still in denial about the failures of their candidate and her campaign in 2016, are running with it. Yesterday on MSNBC, anchor Katy Tur interviewed Sen. Chris Coons (D-Delaware). She asked what Democrats might do if there’s not a full-on Watergate-style investigation of those nefarious Russkies. Block the Neil Gorsuch Supreme Court nomination? Block a debt ceiling deal and push Uncle Sam into default?

“Let’s see if we’re able to make progress,” said Coons, “and if not, you just laid out a number of leverage points that would get the attention of the White House and Republicans in the Senate.”

The powers that be took out Flynn. “But here’s the thing,” says David Stockman. “They were aiming at Donald J. Trump.”

And they didn’t even have to prove Flynn did anything improper when he phoned the Russian ambassador before Trump took office. They just insinuated, anonymously, to mainstream reporters that Flynn might have made promises about dropping a few U.S. sanctions. (Of course, the intel insiders who leaked the details of that phone call could remove any doubt by leaking an unredacted transcript. Fat chance of that…)

“The whole Flynn imbroglio,” says David, “is not about a violation of the Logan Act owing to the fact that the general engaged in diplomacy as a private citizen. It’s about re-litigating the 2016 election.”

Bloomberg reporter Eli Lake agrees with David’s assessment: “Flynn is only the appetizer. Trump is the entree.” Or as a cynical wag on Twitter puts it… 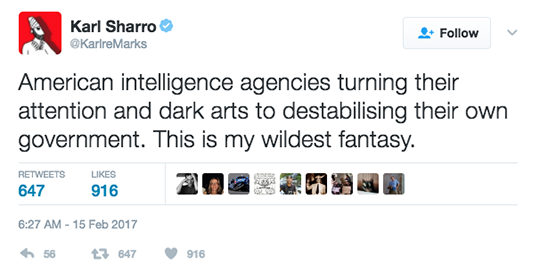 David says there is one parallel to Watergate that’s apt: “When the witch hunt goes full tilt, nothing else happens on Capitol Hill — and most especially not a $4.5 trillion tax cut.”

[Ed. note: David spent years in Washington politics before going onto Wall Street. He knows every inch of the swamp and how hard it is to drain.

In his latest book, Trumped!, David spells out what lies ahead from an insider’s perspective. And he also tells the story nearly everyone’s overlooked — one with the potential to devastate the future of America, your retirement, even the security of you and your family.

We’ve reserved a FREE copy just for you. Just follow this link and tell us where to send it.]

Whether it’s edginess over Deep State machinations or something else, the major U.S. stock indexes are retreating from record territory.

Gold has drifted upward the last 24 hours — the bid now $1,237. Most of that’s a function of dollar weakness, with the dollar index slipping to 100.6.

The surprise economic number of the day is the “Philly Fed” survey of manufacturing conditions in the mid-Atlantic region.

Not only did it crush already-optimistic expectations, it turned in the strongest reading since January 1984 — when Terms of Endearment was tops at the box office and Yes logged its only No. 1 hit with “Owner of a Lonely Heart.”

Put it together with the Empire State survey yesterday and manufacturing is off to a rip-roaring start for 2017. Whether it lasts is another story entirely.

On that note, we recall Trump’s line from one of the debates last fall: “The only thing that looks good is the stock market, but if you raise interest rates even a little bit, that’s going to come crashing down.”

As we check our screens this morning, the market is pricing in only a 22% probability of the Fed raising rates on March 15. Jim Rickards is still taking the other side of that trade. We’ll get the popcorn ready.

[Bonus points: The Fed announcement comes the same day as the debt ceiling. Love it!]

Why, all this uncertainty is enough to drive one to drink. But employees at Lloyd’s of London can no longer do so during office hours.

The legendary insurance firm founded in 1688 acknowledged the City of London financial district has “historically had a reputation for daytime drinking but that has been changing and Lloyd’s has a duty to be a responsible employer, and provide a healthy working environment.”

Employees are venting on message boards: Lloyd’s is the “PC capital of the world.” Another quips, “Will we be asked to go to bed earlier soon?”

The ban applies to all 800 Lloyd’s employees in the City. It does not apply to the brokers and underwriters from other companies who conduct their business from Lloyd’s headquarters.

“Since gold coins carry a very high premium compared with bullion,” begins today’s mailbag, “why would one buy coins instead of bullion?

“There must be a reason. Otherwise, the coins would trade at their gold content value.

The 5: Let’s get the terminology straight first: “Bullion” can encompass coins as well as bars.

So we’re guessing your inquiry means collectible coins — like the gold coins that circulated as money in the United States during the 19th and early 20th centuries.

Collector coins do indeed carry a substantial premium — either because they’re old or rare or both. Collector coins should not be part of the core bullion position in your portfolio. They are speculations.

But there are “bullion coins” of recent vintage, such as U.S. Gold Eagles or Canadian Maple Leafs. Those are perfectly acceptable as a core bullion holding in your portfolio. They do command a small premium over, say, a one-ounce gold bar… but that’s because people readily recognize Eagles and Maple Leafs as a real ounce of gold and not something they might want to have checked out by a professional.

Our final correspondent invokes the words of Frederick Douglass — someone who, as the president says, is getting recognized more and more. Heh…

The reader writes: “Re your Feb. 14 reader’s comment: ‘The American Revolution brought about a relatively minimal government, but it has been steadily becoming more powerful and controlling of its citizens ever since, especially during wars or economic crises. How much will people take before revolting again?’

“And your response, ‘That’s the calculus of rulers everywhere — how long can they retain the consent of the governed?’

“Let’s re-frame it slightly in the words of Frederick Douglass (1857):

“‘Find out just what the People will submit to and you have found out the exact amount of injustice and wrong which will be imposed upon them, and these will continue until they are resisted with either words or blows, or with both. The limits of tyrants are prescribed by the endurance of those whom they oppress.’

“Substitute ‘swamp critters’ for ‘tyrants’ and I think we are home.”

The 5: The threshold at present seems mighty high indeed — at least among everyday Americans, if not the Deep State.

Last week we told you about the possibility of a general strike by Trump opponents for tomorrow — Friday the 17th. General strikes are more of a European and Latin American thing. The idea’s never caught on here. And near as we can tell, the closest tomorrow’s general strike has come to fruition is a poster… 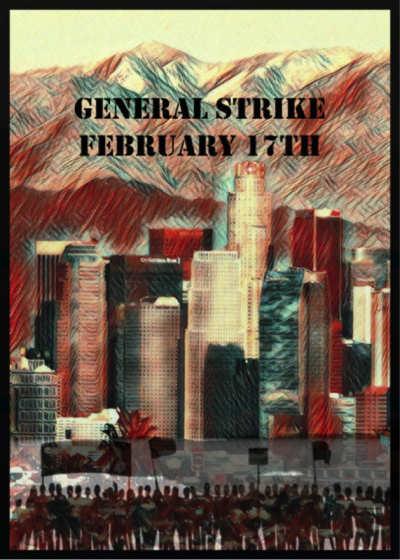 For better or worse, Trump’s opponents can’t get a common agenda together. So today is a national “Day Without Immigrants” protest in which immigrants are staying home. Meanwhile, the organizers of the Women’s March on Washington last month are calling for “A Day Without a Woman” for March 8.

Yes, Team Trump is surely worried about the Deep State. Popular protest and the consent of the governed? Not so much…

P.S. The vial of mysterious liquid you see is NOT some new chemotherapy drug. 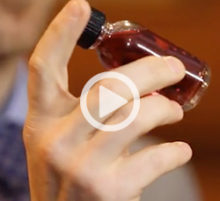 It isn’t any kind of vitamin concoction or genetically engineered bio-cure, either…

The best part: There’s a way to play this game-changer for HUGE potential profits…

Starting in the first quarter of 2017. (The specifics are right here.)