Why America Is “Losing”

In the space of a decade, America’s economic freedom has slid from No. 4 in the world to… 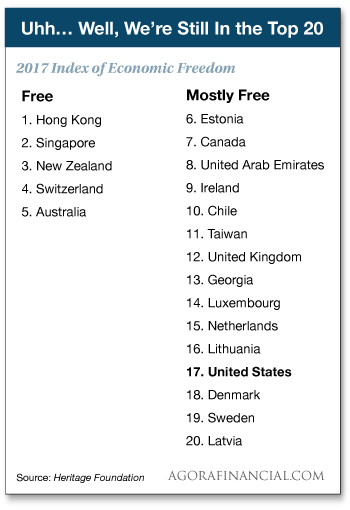 That’s according to the annual Index of Economic Freedom from the conservative Heritage Foundation. The index is a composite of four categories — rule of law, limited government, “regulatory efficiency” and open markets.

As recently as last year, the United States was still No. 11.

Granted, the tumble this year is largely a function of Heritage changing its criteria: The federal budget deficit and the national debt are now taken into account. That said, the top five countries are unchanged compared with a year ago.

And when it comes to the ease of starting a business, America no longer even ranks in the top 50.

The latest ranking of the World Bank puts the Land of the Free at No. 51 — down from No. 49 a year ago. New Zealand, Canada and Hong Kong are tops. Even “authoritarian” Russia manages to come out No. 26 and those bureaucracy-laden French at No. 27.

As we like to say every chance we get it, startups — businesses less than five years old — are responsible for nearly all net job creation in the United States since 1980. That’s according to a landmark 2011 study by the Kauffman Foundation.

Funny, we haven’t heard the president say squat about this — notwithstanding his periodic photo-ops with small-business owners.

“The Defense Industry Is Filling Pentagon Leadership Roles,” says a story at the War Is Boring website.

Indeed, it is. The president has nominated former Lockheed Martin consultant Heather Wilson as Air Force secretary. And The Washington Times says Lockheed VP Robert Rangel is under consideration as deputy secretary of defense.

“Both cases,” writes Mandy Smithberger from the Project on Government Oversight, “show how Trump’s ethics executive order and current lobbying rules are insufficient to address the scope of financial conflicts of interest for officials who go through the revolving door.” Obama issued his own ethics EO and promptly named a Raytheon lobbyist to a top Pentagon post.

We’re not surprised… and the news only reinforces our conviction about the defense sector and the potential for niche defense stocks to multiply your money many times over. Jim Rickards and his team have identified the best-in-class prospects.

Speaking of Jim, he had an unlikely encounter this week… 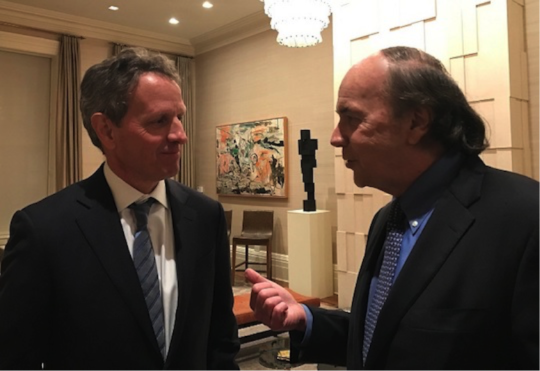 Wednesday in New York. Maybe this one time we should suspend the “TurboTax Timmy” jokes? Nah…

Yes, we know: Why listen to people who set us up for the Panic of 2008? But Jim went into the conversation in the same spirit as his encounter with former Fed chairman Ben Bernanke in 2015. “Naturally,” says Jim, “his views are always worth our time and attention. His analysis carries the weight of not only his own opinions, but also the considered opinions of the entire global financial elite on topics of great interest to all investors.”

Jim pressed Geithner for insight about China. “Geithner is very close to the Chinese elite and has excellent insights into their thinking.

“Geithner seemed to be bracing for a financial crisis coming from China,” Jim says.

“He said categorically that no country has ever successfully navigated the path China is on today — slower growth, the pivot from investment to consumption, bad debts, propping up the banking system, etc., etc. — without a temporary but serious setback.

“Geithner said he believes ‘China can manage their capital account and their currency,’ but later contradicted himself and said that it would be difficult for China to avoid some kind of currency crisis.

“I agree. China will always be around; it’s not going to slide into the Pacific Ocean. But the U.S., Europe, Japan and Latin America have all suffered major financial crises as they managed growth and transition from developing to middle-income to rich economies. China will not be spared.

“Geithner also repeatedly described the international financial system as ‘fragile,’ notwithstanding increases in bank capital and other measures.

“Connecting the dots between Geithner’s comments on China and his reference to fragility suggests that what happens in China does not stay in China. My takeaway is that another global financial crisis is a clear-and-present danger. We’re not out of the woods.”

And wouldn’t you know it, household debt is now approaching levels equal to the last financial crisis.

The New York Fed is out with its quarterly assessment of household debt. The mighty American consumer’s debt load totaled $12.58 trillion at the end of last year. That’s not far off the 2008 peak of $12.68 trillion.

The growth during 2016 works out to $460 billion — the biggest increase in nearly a decade. It’s mostly nonmortgage debt driving the increase. That means credit cards, student loans and auto loans.

The mainstream is going out of its way to put lipstick on this hog: “Rising debt hints that banks are extending more credit,” says CNN.

Oh, really? While the Fed was issuing that report yesterday, we also learned at least 1 million U.S. consumers are now at least 60 days in arrears on their auto loans.

TransUnion, one of the big credit-reporting agencies, says the proportion of auto loans in default grew 13% during 2016. The average borrower is carrying a balance of $18,400 — up 10% from three years ago. Ouch.

As you might recall, a collapse in subprime auto loans is one of Gerald Celente’s top five economic trends for 2017. He says it’s still not too late to profit from it.

Most of the major U.S. stock indexes are in retreat as the week winds down.

At last check, the Dow is down a quarter-percent at 20,564. But the Nasdaq is just barely in the green at 5,816 — only three points off its record close on Wednesday.

Gold is pulling back just a bit at $1,238. In light of dollar strength — the dollar index is back up to 100.9 — that resilience is impressive.

In the absence of any major economic numbers or earnings reports, the trader chatter is about an Associated Press report that the Trump administration is looking to deploy 100,000 National Guard troops to round up illegal immigrants — an act that would surely have ripple effects throughout the economy.

The AP says its story is based on a “draft memo” by Homeland Security Secretary John Kelly. The White House calls the story false. Your move, AP: Post the memo online or tell readers why you won’t…

“Small stocks are finally breaking out,” says Greg Guenthner of our trading desk.

“Wednesday marked the fifth straight day of gains posted by the Russell 2000. More importantly, the small-cap index has broken out to new all-time highs. That’s right — small stocks have finally snapped out of their slumber.”

After a huge post-election rally, the Russell was range-bound for more than two months. No more… 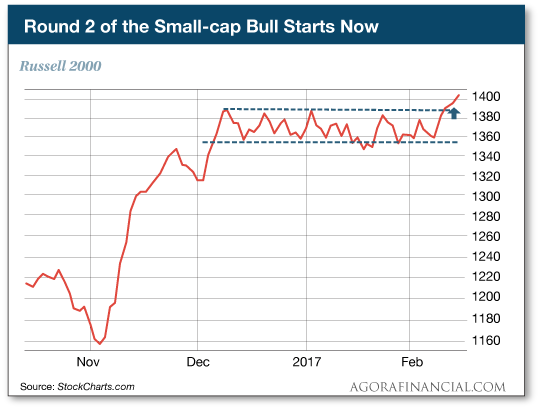 “This is how big changes in trend happen,” says Greg. “One second, everyone hates small caps. Just when the last seller leaves the building, a furious rally begins to take shape. And the powerful rally that sent the Russell to new highs late last year was only a preview of what’s bubbling up this week.”

“Please lay off the political commentary!” begins today’s mailbag, in reaction to yesterday’s episode of The 5. “I want to make money, not hear how you love Trump!”

“I don’t understand,” says another, “how you supposedly intelligent folks at Agora can continue to support this incompetent buffoon.”

The 5: Yes! We can’t wait till we say something that pisses off the Trump fanboys next week and someone tells us to “get on board with our president!”

“Dave,” writes one of our regulars, “IMO, Trump ‘seals his fate’ every time he opens his mouth — or his smartphone.

“I’ve tried to be agnostic about the whole situation since he won the election. Recently, I even read his 2015 book, just to try to understand his game plan. God knows there’s no way to figure it out from what he says or tweets, and the mainstream media aren’t much help. They just add to the noise.

“I would like to believe The Donald is the leader who can rock the status quo enough to actually fix some things. Still, I’ve had the opportunity to work with a few megalomaniacs through the years. They seem to share a common behavioral trait: Once they start down a path, for better or worse, they never turn back. Every time you think their irrationality and mendacity can’t get any worse, they find yet another way to astound you.

“Anyway, it’s comical that Trump is popping off now about the stock market hitting new highs, as if it’s a sign of ‘confidence and optimism’ in him. Isn’t he the guy who railed about how ‘we are in a big, fat, ugly bubble’?

“As Jim Rickards points out, when a system is in a critical state, there’s no point in dwelling on which (snow)flake finally triggers the avalanche. But our new president sure looks like the $#!+ disturber who will knock the snowpack loose one way or another…

The 5: An excellent memory you have…

“Your 4:30 correspondent on Tuesday defined swamp critters as ‘those who become powerful and/or rich by using the government laws, rules and regulations that most of us don’t understand…’

“The real swamp critters are those who write those laws and regulations that enrich themselves and allow the rich and elites to suck the income and wealth from the middle and lower classes and add it to their already bloated accounts.

“Another group of swamp critters are those in the media that look the other way in order to retain their power and position in the swamp.”

“Wow, a Yes reference,” writes our final correspondent, also reacting to yesterday’s episode. “Too bad ‘Owner of a Lonely Heart’ is one of their worst songs.”

The 5: Your progger editor isn’t nearly as hostile to the ’80s “Yes-West” lineup as many fans are. Indeed, I’m eager to see whether the Anderson-Rabin-Wakeman collaboration yields new music and not just a tour. (Trevor Rabin spoke a cruel truth when he said the current Yes lineup is a tribute band plus Steve Howe. And I loves me my Steve Howe.)

P.S. We’re back as usual tomorrow with our Saturday wrap-up for the week, 5 Things You Need to Know. But you won’t be receiving your regular issue on Monday; U.S. markets will be closed for Presidents Day, and so will the Agora Financial offices. The weekday edition of The 5 returns on Tuesday.