The Housing Crisis of 2017 [Not What You Think]

“But this housing crisis is much different than the last one,” he hastens to add. “This is a crisis of opportunity.”

First, a timely number: The pace of existing home sales has just reached a 10-year high.

The National Association of Realtors says the number jumped 3.3% in January — way higher than even the most optimistic guess among dozens of economists polled by Bloomberg.

The brisk sales pace comes despite a low amount of inventory on the market. In theory it would take only 3½ months to sell all the homes up for sale right now; the real estate industry considers anything less than five months to be a “tight” market.

The sales pace last month was the highest since February 2007. That happens to be the month the first tremors began to shake the mortgage market — foreshadowing the financial earthquake of 2008.

On this day 10 years ago, HSBC fired the head of its U.S. mortgage lending business. Two weeks earlier, the firm warned it would take a write-down on its subprime mortgage-backed securities. It was the first such warning issued by a global banking giant. Nineteen months later, all of the too-big-to-fail banks were standing in line for a federal bailout.

Housing supply a decade ago was anything but tight. “Back then,” Zach recalls, “the housing bubble led to an oversupply of new homes on the market. Builders bought huge tracts of land and developed entire neighborhoods with the expectation that new homebuyers would pay exorbitant prices and hand them windfall prices.

“When the bubble burst, many homebuilders went bankrupt. They had too much debt from purchasing land and financing the construction. And there were no homebuyers to be found.”

“Today, we’ve got a very different crisis,” Zach goes on. “There are too many buyers on the market and not enough homes for sale.”

And no one knows that better than a friend of Zach’s named Rick. “He and his wife listed their home for sale last Wednesday,” Zach says. “They wanted to move closer to his family so his kids could see their grandparents.

“On Thursday, his house was shown to 14 different prospective buyers. ‘We couldn’t even take my son home after school,’ he told me.

“By the end of the day, Rick had four offers to consider. And he hadn’t even started to look for a new home for his family to move into. ‘We may not be able to find a new place to live in time!’” 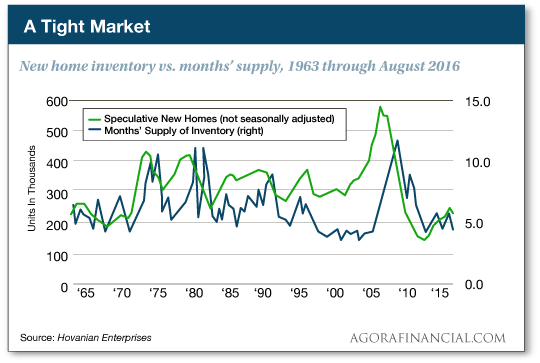 “The huge oversupply of homes that was built during the bubble is easy to see starting in 2004 and peaking after the crash,” says Zach. “At one point, there were 12 months worth of new homes waiting to be sold. Today we are back to less than five months of housing supply, and it’s the smallest amount in 50 years.”

What changed? “After the 2008 crisis, the homebuilding industry went into hibernation. Banks refused to loan money to developers. Builders focused on apartment complexes and other multifamily structures. And the supply of single-family homes dried up.

That’s bullish for homebuilders. But Zach is not recommending homebuilder stocks — not as a buy-and-hold proposition, not now.

This morning, however, Zach did show his premium subscribers how to collect an instant $200 in income from a homebuilder, using his perpetual income system. Using the same technique, he’s shown readers how to collect a total $2,425 this year — and it’s only the 22nd of February.

The markets are treading water before the anticlimactic release of the “Fed minutes” this afternoon.

As we write, the Federal Reserve has not yet released the minutes from its meeting three weeks ago today. But there’s no mystery: Since the meeting, Fed chair Janet Yellen told Congress that an increase in the fed funds rate at the next meeting in March is, as the expression goes, “on the table.”

In the week since Yellen’s testimony to Congress, traders have come around to Jim’s long-standing view that a March rate increase is a certainty. Under ordinary circumstances, that should have put a hurt on the Midas metal. Instead, it’s been hanging tough.

“My expectation,” Jim says now, “is that gold will move sideways to slightly higher between now and the Fed meeting on March 15.

“Once that rate hike is out of the way, the U.S. economy will slow noticeably because of higher rates, a stronger dollar and because the economic fundamentals are weak to begin with. That means by April or May the Fed will have to flip-flop (for the ninth time since May 2013) and revert to a dovish stance.”

“That flip-flop will happen right around the same time the White House announces three new appointees to the Fed board of governors and FOMC. I expect these new governors will be dovish, based on Trump’s publicly expressed preference for a weaker dollar.

“That combination of Fed ease (due to slowing) and Fed doves flying into the boardroom on Constitution Avenue in Washington will give gold prices a major lift in the second half of the year.”

[Ed. note: Jim also continues to anticipate a “maxi-devaluation” by China that will cause a severe hiccup in nearly every asset class. But if you know how to play it right, you could turn every $1 into $3 with lightning speed. Jim examines the state of play when you click here.]

And now… the return of the feral hog. Only now, the law of unintended consequences is looming.

If you’re a longtime reader, you’ll recall the feral hog was a fixture in The 5 around mid-2013. At the time, Dallas Fed chief Richard Fisher observed “that big money does organize itself somewhat like feral hogs. If they detect a weakness or a bad scent, they’ll go after it.” Fisher intended his awkward analogy as a warning to the markets that the Fed wouldn’t keep up its “QE” bond purchases in definitely.

For those of us outside Texas and other south-central states, it was a revelation — the notorious nuisance wild pigs are. By one estimate, they cost Texas agriculture $50 million a year in damage. It was fodder for weeks (along with tapirs, but that’s another story)…

Fast-forward to 2017 and we see Texas Agriculture Commissioner Sid Miller proposes ridding the Lone Star state of the nuisance by using bait laced with the blood thinner warfarin; evidently, it doesn’t take much of the stuff to kill a hog.

“This is going to be the hog apocalypse, if you like,” Miller tells the Austin American-Statesman: “If you want them gone, this will get them gone.” 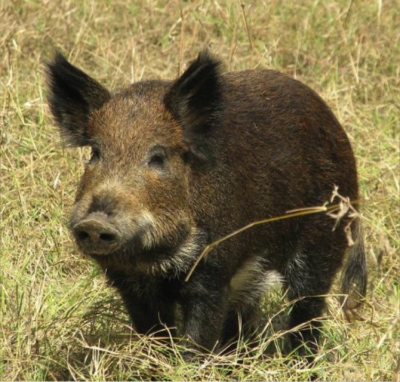 Not everyone thinks it’s such a swell idea. “One state wildlife official warned that the crumbs that a hog leaves behind could affect black bears and other animals,” says a Fox News account.

Too, “If a hog is poisoned,” says Eydin Hansen of the Texas Hog Hunters Association, “do I want to feed it to my family?”

“You know what cracks me up?” a reader writes in response to our main topic yesterday. “Now that states find they can make lots of money by supporting pot use instead of prosecuting its use, they are all jumping on the bandwagon.

“They not only gain all that tax income but they save money by not incarcerating everyone who even looked like they had ever used pot, in the process ruining thousands of lives. They can now maybe direct their police forces to investigate real criminals and do more good for society.

“The only thing that worries me is as the government agencies get more involved, they will more than likely screw it all up, as they do everything else they have control of, which will drive pot back into the black market. Just legalize it, take your tax cut and get the hell out of the way. Should have done it 50 years ago!”

The 5: The devil is always in the details, and we’re sure Satan’s grubby mitts will be all over this one before it’s over.

“I had read that the ‘war on cash’ had invaded Down Under in the form of a ban on their largest circulating bill, the A$100,” a reader writes.

“Do you suppose that the annual Index of Economic Freedom calculation missed that or didn’t factor it in with Australia’s top-five ranking?”

The 5: Without looking at the fine print of the Heritage Foundation’s methodology, we’re guessing the war on cash didn’t factor in. Sweden, in the vanguard of the cashless economy, ranks No. 19 — only two spots behind the United States.

“Wow — China and money laundering!” a reader enthuses in response to yesterday’s mailbag — wherein a reader described how Chinese can get around a limit on taking money out of the country if they have kids enrolled in school overseas.

“I see a future for ‘doctors’ and even ‘colleges and universities’ developing a nice ‘money laundering’ business for wealthy Chinese ‘patients and students’ as these client Chinese try to get their fortunes out of China.

“Say for a 10–25% ‘bonus,’ new ‘treatment centers and educational institutions’ could really help the ‘sick’ and ‘knowledge hungry’ expatriate a bunch of their wealth! Want to start a college?”

The 5: Wanna bet existing institutions of higher learning will figure out how to grab a piece of the action? Hey, if banks can profit off drug dealing and get a slap on the wrist from the feds, why not?

He’s identified the No. 1 penny pot stock you need in your portfolio for 2017.

Anyone who doesn’t buy this stock could be missing an opportunity to turn a very small amount of cash… into a massive fortune… very FAST.

Click here to learn which little stocks are going to roll up the fattest gains.